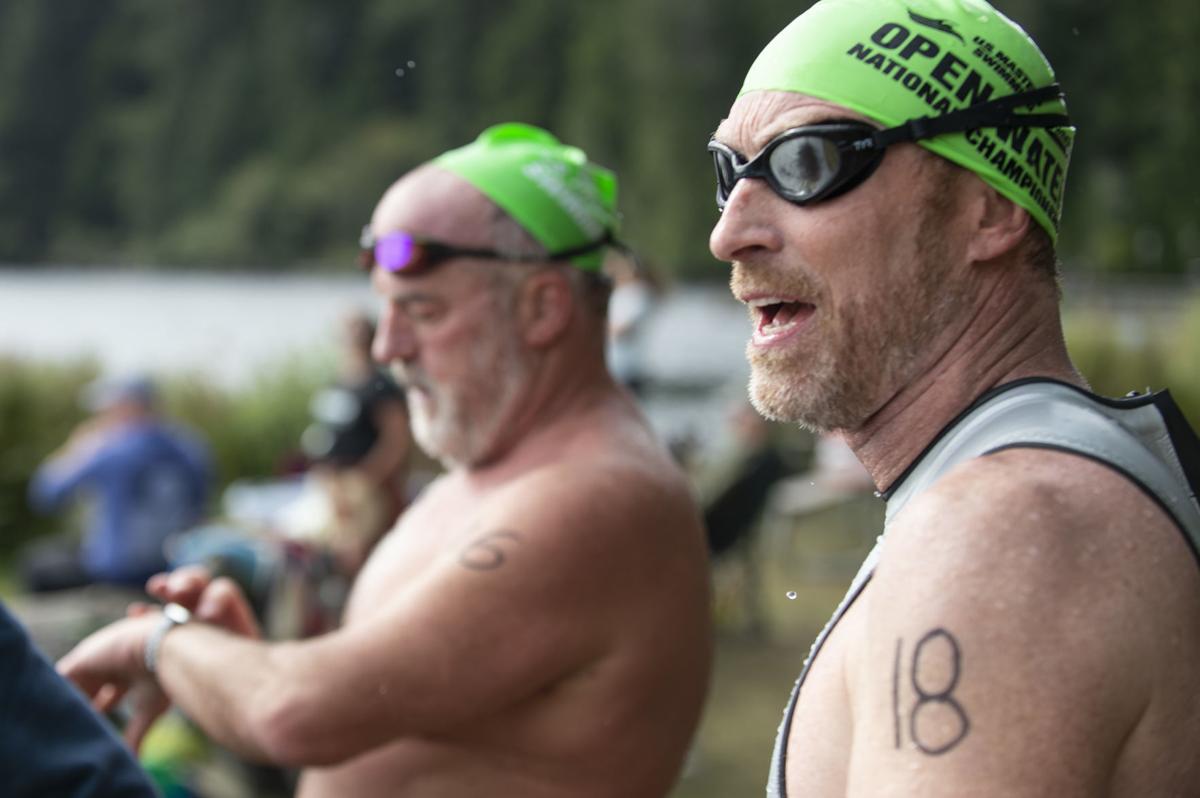 Shawn Orchard, right, of Tigard catches his breath Saturday after the 3,000-meter swim during the 15th-annual US Masters Open Water Swim Meet at Eel Lake. 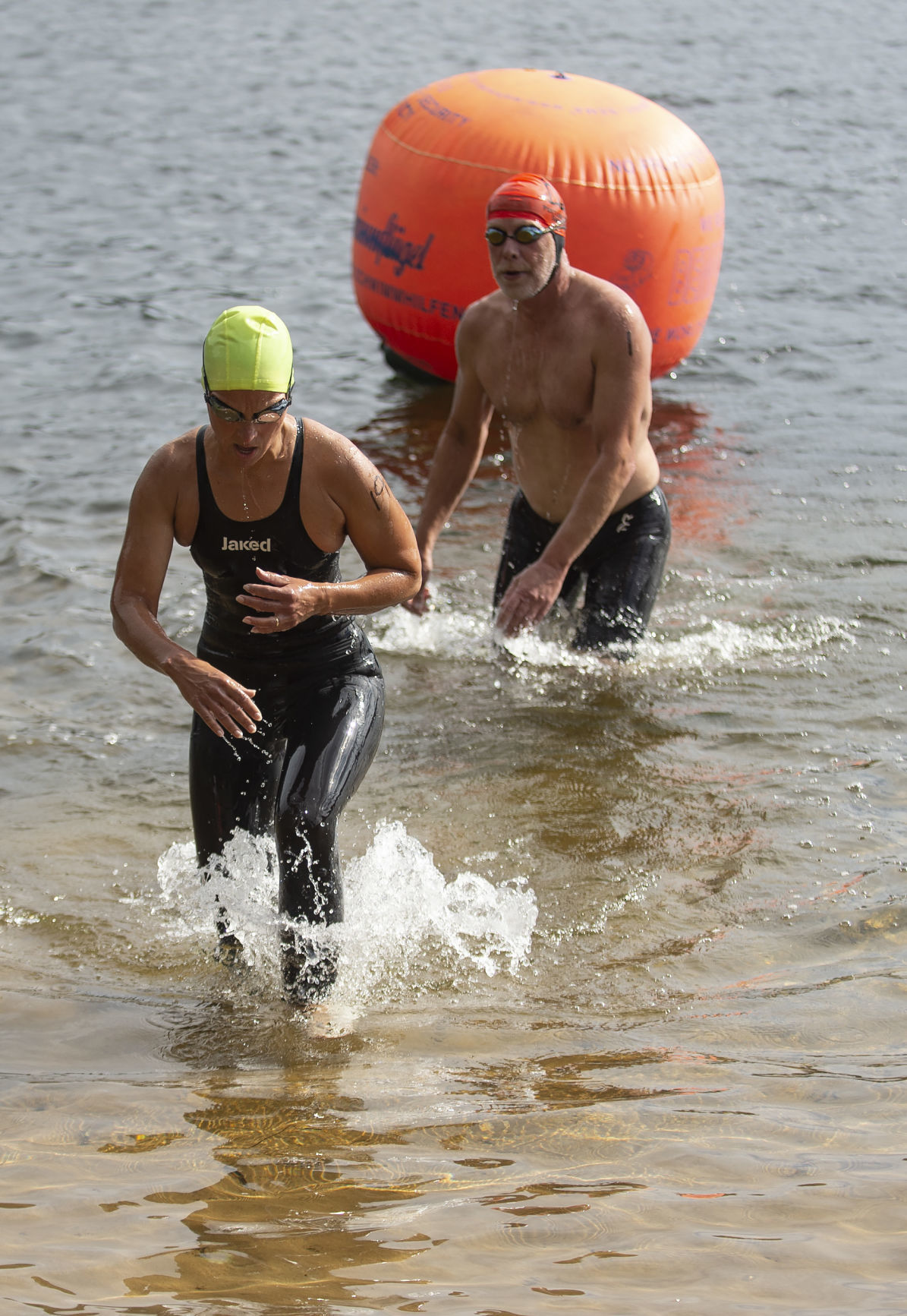 Jayette Pettit, of Vancouver, Wash., emerges from the water Saturday taking first place in the 3,000-meter-swim ahead of Pat Chandler of Corvallis in the 15th-annual US Masters Open Water Swim Meet at Eel Lake.

“Water quality, good water temperature, great surroundings and great people. It’s really about people,” said Oregon Masters Swimming chairman Bob Bruce on Saturday morning at Eel Lake. “It’s a great day when we can find a sunny day like this and a beautiful venue and go swim with our friends.”

Jayette Pettit, of Vancouver, Wash., emerges from the water Saturday taking first place in the 3,000-meter-swim ahead of Pat Chandler of Corva…

Those ingredients came together on Saturday morning as a group of 31 swimmers from across the Northwest took the plunge at the 15th-annual US Masters Open Water Swim Meet at Eel Lake. The day is made up of three events: a 3,000-meter swim, a 500-meter agility course and a 1,500-meter swim. With 25 of the swimmers swimming in both of the long events, and about 20 in the agility race, it was a day of racers getting in and out of the water.

“We hang out on the beach and we socialize, then we get in the water and swim and then we hang out on the beach and socialize,” said Pat Allender of Corvallis, who was competing in this event for the 10th time. Allender finished second in both the 1,500 and the 3,000. “It’s a beautiful lake and the water is really nice. It’s a good course, friendly people — what’s not to like?”

The weather outside got up to 70 degrees with the water temperature at about 72 degrees for the swimmers. The day kicked off at 9 a.m. with 28 swimmers competing in the 3,000. The two-lap course marked by buoys was monitored by nine volunteers on kayaks and paddleboards with the Coast Guard patrolling the middle of the lake.

Taking an early lead that she would never relinquish was Jayette Pettit who came down from Vancouver, Wash., for the race. Pettit, who swims 5,000 meters a day, trains in everything from the Columbia River to the Willamette River and any other body she stumbles upon that looks swimmable. In her third competition at Eel Lake, she finished in a time of 46 minutes and 10 seconds.

“I like to do open water swims and this is really nice one. It’s a really great area and they’ve got a really wonderful lake here,” said Pettit. “There’s not that many open water swims so I try to do them all.”

Splitting up the two distance races of the day was the 500-meter agility course that was set up by the chairman Bruce. The race had swimmers bobbing through buoys, hopping through hula hoops and even a brief stint limboing on land.

“It’s always fun to throw a curveball into the mix. This one they had to do 10 features of agility stuff in the middle of it which, not the least of which, was swimming through a lot of weeds which freaks some people out,” said Bruce. “I want people to have fun. Variety is the spice of life and the agility swim was our variety today.”

The final race of the day was the 1,500, which featured 31 swimmers. Just one lap around the course, a group of familiar faces, including Pettit and Allender, emerged early in the lead pack. But pulling away in the final stretch was Emily Fenster who finished first in a time of 22:56.

Fenster, a former Washington State University swimmer and recent Eugene transplant, was looking to test the waters of open water swimming. With the help of a friend she found this race and the pair decided to try it out.

“We were just kind of looking online and neither of us had swam in years and we picked one later in the summer so we would have time to get back into the water,” said Fenster who was competing in her third open water swim ever. “We had no idea what to expect. How many people were going to be here, how intense it was going to be but we were just excited to do it. So now I’m hoping to do more of them.”

Also competing in the 1,500 was Dale Barrett of Coos Bay, one of just a few local swimmers racing on the day. Barrett’s swims are often paired with a bout of biking and running as he prepares for various triathlons, including an Ironman triathlon that he competed last May.

But on Saturday, Barrett was pleased with just having one event to focus on.

For the second year in a row, a pickleball tournament will be held in Reedsport.