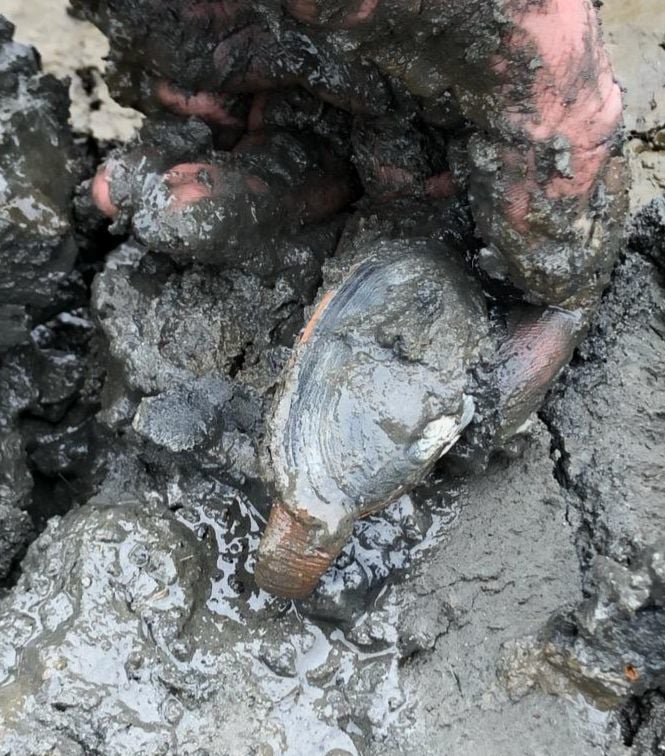 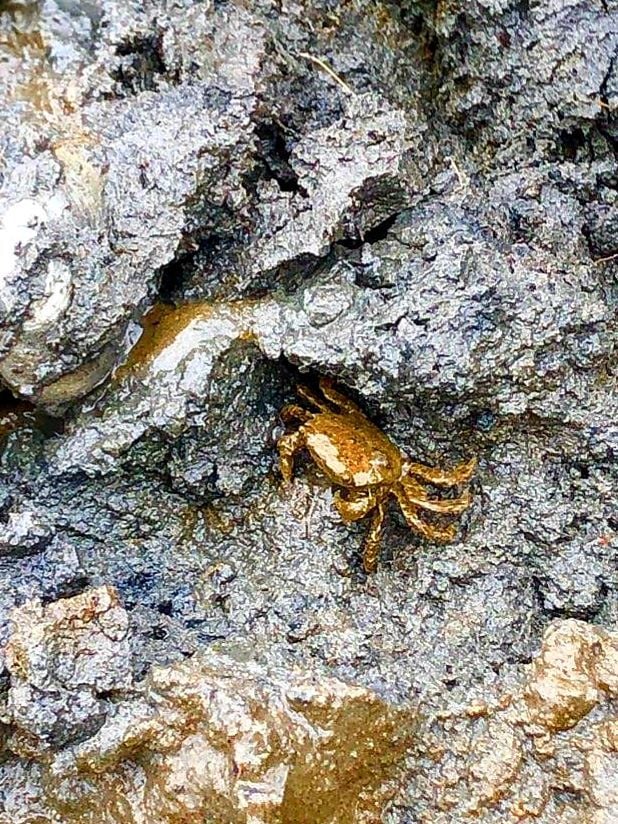 While clamming the Gensorek family discovered little crabs the size of a pea living in tunnels poking up to the surface. 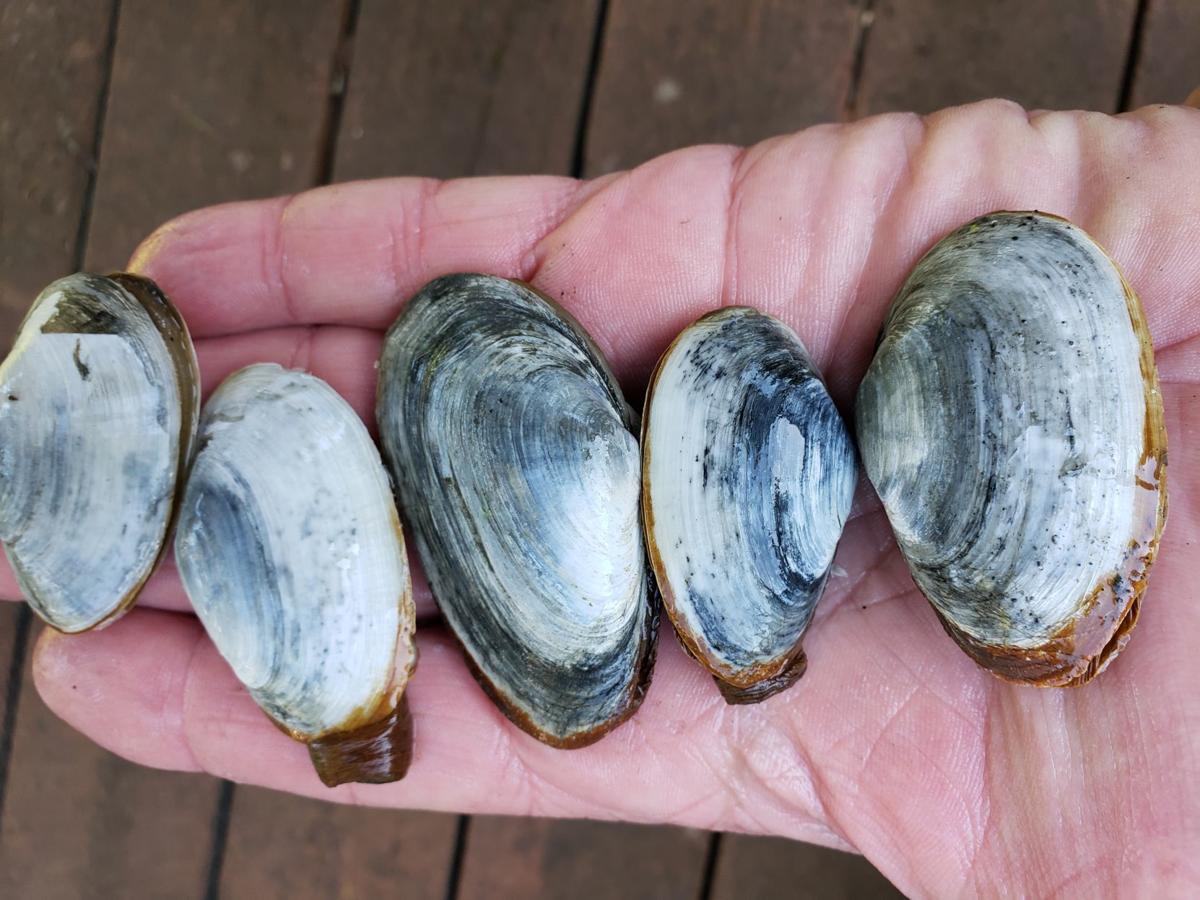 While clamming the Gensorek family discovered little crabs the size of a pea living in tunnels poking up to the surface.

Howdy everyone! Our days are still getting longer which means more fishing, clamming, and crabbing into the evening hours. Those of you along I-5 have already experienced some temperatures into the 80's and we have had some nice sunny days along the coast but the wind is keeping us at bay for the most part. Actually while there has been the occasional day in the ocean here and there with great limits of rockfish and lingcod we have been quite literally kept in the bay or “at bay” recently. As I wrote this I had an “AHA!” moment and was pretty sure I discovered the origin of the term but a quick online search quickly dashed my excitement. As many sources seem to verify, the term “at bay” was first referenced in regards to hunting with hounds in the 1300’s. Thus ends my career as an etymologist.

Moving along back to fishing the bay has in fact been producing a great quantity and quality of fish lately. Once all the silt and dirt from the heavy rains cleared out the fishing picked up immediately and several customers are reporting good catches of black rockfish and copper rockfish. Basin Tackle even snuck away for some bay fishing this past weekend with our good friends Brian and Kayla and fought 25 mile per hour winds and a fast current in an attempt to catch fresh fish for Kayla’s birthday party. The conditions eventually made us come back in but we caught some beautiful ocean-grade rockfish and a couple lingcod too! The crabbing was slower than we would have liked but it was still enough for a crab boil and good food and good times were had by all.

We also went clamming this weekend for gapers out on the mud-flats in front of the Portside Restaurant here in Charleston. We all got limits and I personally collected twelve gaper clams, eight butter clams, and nine golf balls. Someone up on the shore occasionally drives golf balls into this part of the bay and I have almost as much fun looking for them as I do clams.

After our clam and golf ball digging we packed up and moved across the bay to a new spot that we haven’t dug before in search of other clam species and sure enough we found some! The clams we discovered were softshell clams and the best part of these is that we are allowed 36 of them in addition to twenty of our usual menu of gapers and butter clams.

Softshell clams are not native to our coast but rather originated from the East coast where they have a fairly large economic impact and are part of the food and culture of certain areas.

Softshell clams were brought over in the late 1800’s, around the same time as striped bass and other species and I always wonder what that looked like and how they did it. The logistics of transporting live wild critters across the country from coast to coast is daunting these days never mind over a hundred years ago.

Softshell clams were first classified and named in 1758 by Swedish zoologist Carl Linnaeus and their binomial name (nerd talk name) is Mya arenaria.  As an interesting side note it turns out that Carl is THEE guy that started the whole binomial naming thing.

While softshell clams prefer muddier areas than many of our indigenous species I have found them in pockets here and there over the past few years, usually amongst butter clams, but not this day. The ones we found were in a thick, nasty, boot stealing, congealed gumbo mess. If wet clay and chocolate pudding got married and had a baby this is what it would look like.

After slogging and crawling through this mire we found fantastic little crabs the size of a pea living in tunnels poking up to the surface, we found nasty worms longer than spaghetti and of course we found our softshell clams. As a novice to softshell clamming, or perhaps because it wasn’t really an optimal place for them we did not come home with any large “trophy” clams worthy of hanging on the wall. What we did get were a couple handfuls of small interesting foreign clams not nutritionally worth the effort. As a rough estimate I would say I collected about 200 calories worth of food while burning about two or three hundred thousand; remember I’m not a nutritionist and my numbers may be off a little. I also now refer to this type of clamming as the “softshell workout”. The shells of these bivalves are thin and break easily hence the word “soft” in their common name and they take about two years to grow to maturity and proper eating size. While the second part of our clamming day was a limited success I will keep looking for new and fun things to catch, cook, and eat and I promise I’ll let you know what we find along the way.

Whether you are slogging through the mud, chasing fish in the ocean or bay, or just passing by I hope to see you out there!

Basin Tackle Rob, or  “BTR” is the owner of Basin Tackle www.basintackle.net in the Charleston Marina and can be reached by phone at (541) 888-FISH, by Facebook at Basin Tackle Charleston, or e-mail at basin_tackle@yahoo.com. Robs fishing reports can be heard daily at 6:20 a.m. and 4:20 p.m. on KRSB Best Country 103 out of Roseburg and his Basin Tackle Outdoor Show can be heard Wednesdays at 3 p.m. on kwro.com. In addition to all this he sometimes actually gets out and catches a fish or two.