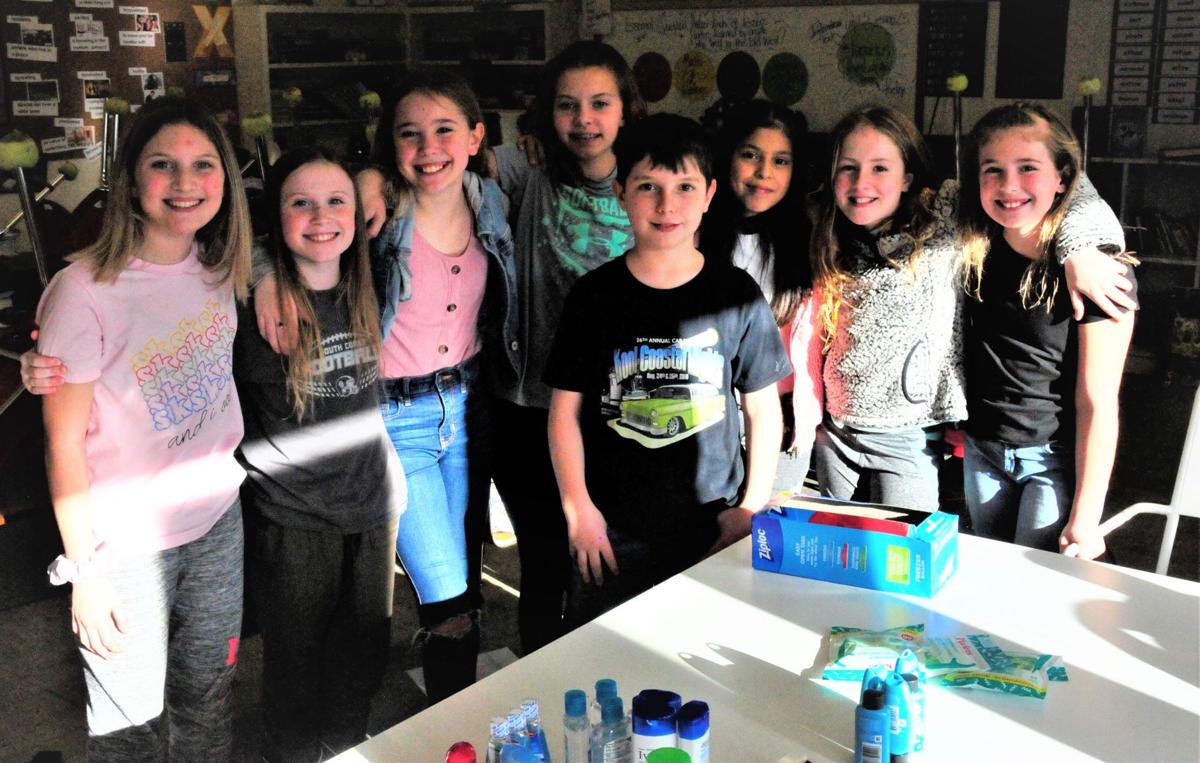 The Secret Society of Givers at Highland Elementary, Jayde, Natalie, Faith, Charlie, Colby, Karen, Brooklynn, and Chloe. The group was preparing to make Blessing Bags for those in need. Not pictured are Thorin, Sahara, and Jaden. 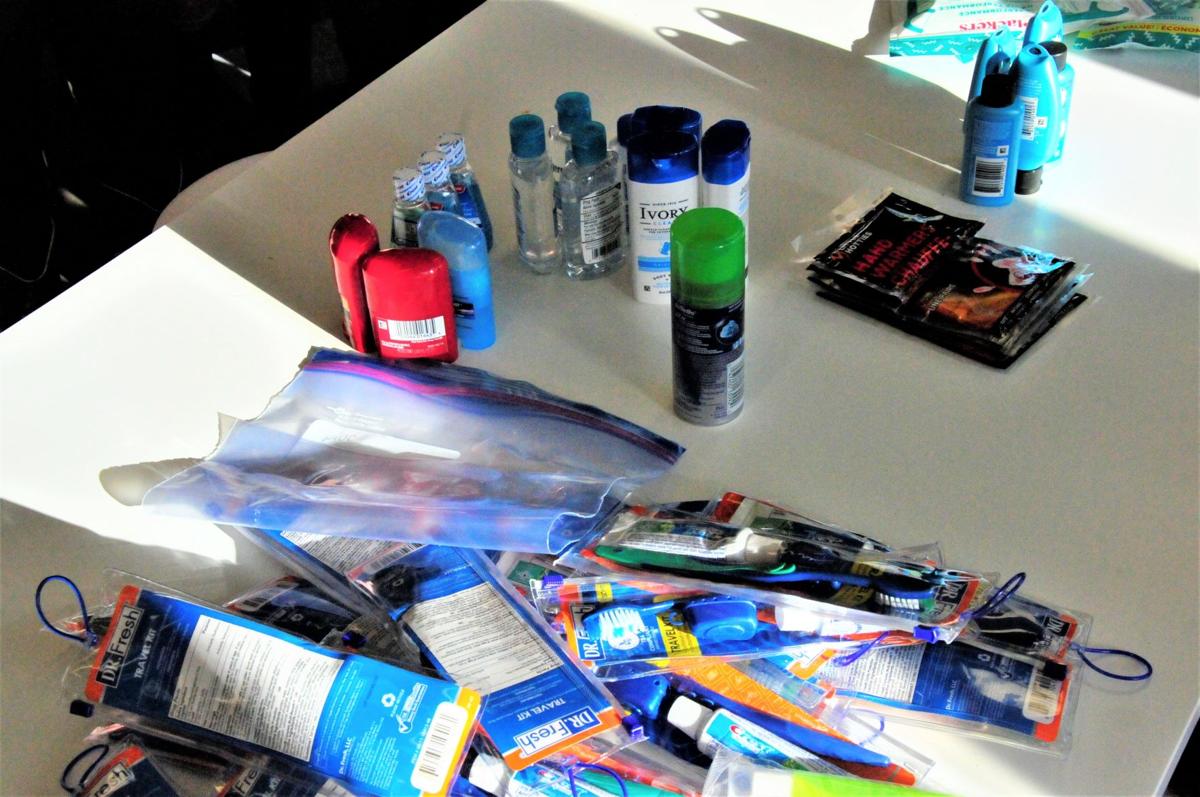 Supplies for making Blessings Bags are organized in a staging area, awaiting assembly.

The Secret Society of Givers at Highland Elementary, Jayde, Natalie, Faith, Charlie, Colby, Karen, Brooklynn, and Chloe. The group was preparing to make Blessing Bags for those in need. Not pictured are Thorin, Sahara, and Jaden.

Supplies for making Blessings Bags are organized in a staging area, awaiting assembly.

REEDSPORT — If kids at Highland Elementary School have received a birthday card signed "SSG" they can thank the Secret Society of Givers, a recently formed club looking to spread positivity and help the members of their community.

The Society is composed of fifth and sixth graders and advised by Melissa Watts. The club was created during a football game. According to Watts, Jayde, one of the student members, approached her, upset at the negativity she'd been seeing and wishing everyone could get along. Watts suggested they could do something about it and they gathered like-minded students to help. Thus the Society was born.

"It helps other people see that other people's feelings are important too, not just theirs," said Jayde, of the club's mission. "We're trying to spread the word and help the community be better to each other."

Another student added that they're trying to help people see "that they're beautiful inside and out and they should keep being themselves." She encouraged people to push the bullies out of their minds and not let negative people get to them.

The students said they wanted Watts as their adviser because of how supportive she is to everyone and encouraging positive interactions. Watts also has low tolerance for bullying and put downs between students.

They thought of all the bad people in the world and decided that if they change one thing, the whole planet can get better. They formed the club to help others and recognize people who work hard in the community. They said they wanted to form a club for people who really care about the community and want to make it a better place. A club to make a kind, caring community.

The students added that there are too many bullies in the world and that this can lead to people killing themselves as they get too frustrated with everything, which is what they don't want to see happening in the world. The group's consensus was that someone being mean to others shouldn't take a life out of the world, and that people should stand up for others when they see someone being a bully.

"We want to lift people up, not put them down," they said. "You need to treat others how you want to be treated. So, if you're a bully you're going to get others bullying you back."

Watts said she considers it an honor to create a space for the students to "exhibit and execute such simple, yet amazing acts of kindness." She said the projects they choose to do astounds her, adding that the kids are ambitious, compassionate, and organized in how they run the club.

"How hopeful that a group of 11- and 12-year-olds have figured out that giving is so much better than receiving," Watts said. "With these students at the helm, they are truly modeling the change they wish to see in the world.

As a regular project, when students have a birthday the Society makes a card with an inspirational quote or saying and a piece of candy taped inside. They said the other students around the school have been excited to get a card and that kids in the younger grades are especially thrilled to get one.

They also made cards for the school's bus drivers. They noted that the drivers do such a good job and work really hard to make sure everyone is safe in their commute to and from school, but don't always get much appreciation. They added that the drivers are often doing it on a volunteer basis, rather than a regular job.

They also sent a Valentine's Day card to a 100-year-old veteran in Las Vegas. Charlie, one of the club members, saw that he was asking for Valentines from all over the country, since he likes to collect and scrapbook cards. The club decided to send him something from Reedsport and made a card for him. Later, they found that CBS did a special about him.

"The next week they had a whole special on him on the news, on CBS," said Watts. "So it was cool that they got to be involved in that."

Watts said some people aren't interested in joining the club because of all the hard work they do.

"It's not just one of those clubs where you meet and have games, this is way different than any other club," they said. "This is helping people."

Currently, the Society is making blessing bags for Reedsport's homeless and anyone else who needs them. The bags contain an oral health kit, hand sanitizer, deodorant, hand warmers and other items.

They also plans to make care packages for deployed service members from the Reedsport area. According to the kids, the packages would contain snacks, baked goods and other items to remind them of home. Packages would be sent out approximately once a month.

The Society asks that residents with family members who are deployed send them names and a mailing address, if they would like a package sent to them. Information should be emailed to Watts at mwatts@reedsport.k12.or.us.

Much of the club's work happens during recess and after school. Watts said the kids give up recesses to work on projects, as well as their regular after school meetings on Wednesdays. Sometimes they also meet during lunch, if members are unable to meet after school.

The students said their parents are very supportive of the club and its activities. They're encouraging of everything and buy supplies for the group's projects, like everything for the blessing bags. Some parents also reach out to see how they can help with their activities.

"They know we don't want it just to have it," they said. "They know we love helping the community. They know it's for the whole entire world, to help it. They support it because they want the whole world to not be a bully and for a lot of people to be themselves and not a bully."

The club welcomes any other students who want to get involved. They would need parental permission, but would just need to come to the Wednesday meetings in Watts' classroom.

The group also strictly upholds its values. The kids explained they created a policy that if a member is found to be bullying another student, or otherwise spreading negativity, they may no longer be welcome in the Society. The group will sit down with the member and discuss the situation. If they genuinely promise not to continue, they can be allowed to stay in the club. However, if they're not sincere, or are found to still be going against the club's values, they will lose membership and not be allowed to participate in activities anymore.

"If they're being rude and want to join, we come together with them and see if 'will you respect everyone from now on,'" they said. "Because we want everyone that's in here to be kind and to help the community and show they want to be in here."

The kids are trying to stay humble about their efforts. They don't make a big deal about what they're doing, or expect praise. While lots of people at Highland know about the SSG, not as many know who all is involved and the members don't brag about it.

"It makes it more fun when it's suspicious, like to try and figure out who it's really from," they said of the birthday cards. "So, it's like a mystery. That's why we don't tell that many people."

The club members were unanimous in saying they wanted to continue the club after this school year. Though the sixth grade members will be moving on to the charter school next year, they said they still plan to be involved, coming down to Highland to help or meeting outside of school. They may also expand the club to have a branch in the charter school.

The Society encourages kids in the schools of neighboring communities to start their own versions of the Secret Society of Givers and to help people in their own areas. Watts suggested they could organize a group of clubs around the region that could do projects as a whole to benefit the entire South Coast community, as well as local projects.

Reporter Adam Robertson can be reached at 541-266-6043, or by email at aworldnews4@countrymedia.net.