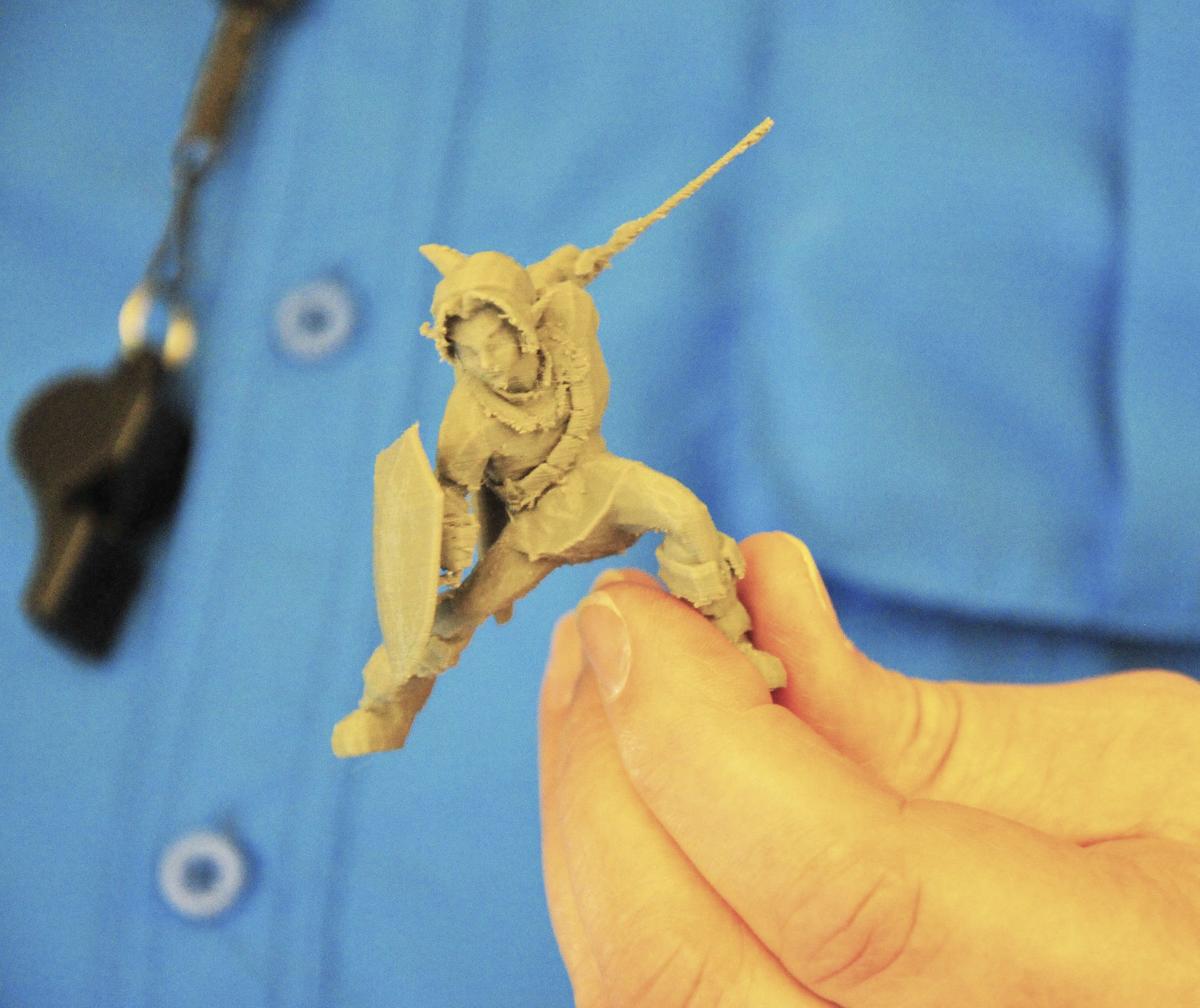 Bill Shaw shows off a model of Link, from the Legend of Zelda video game, designed by one of his students and printed in class. 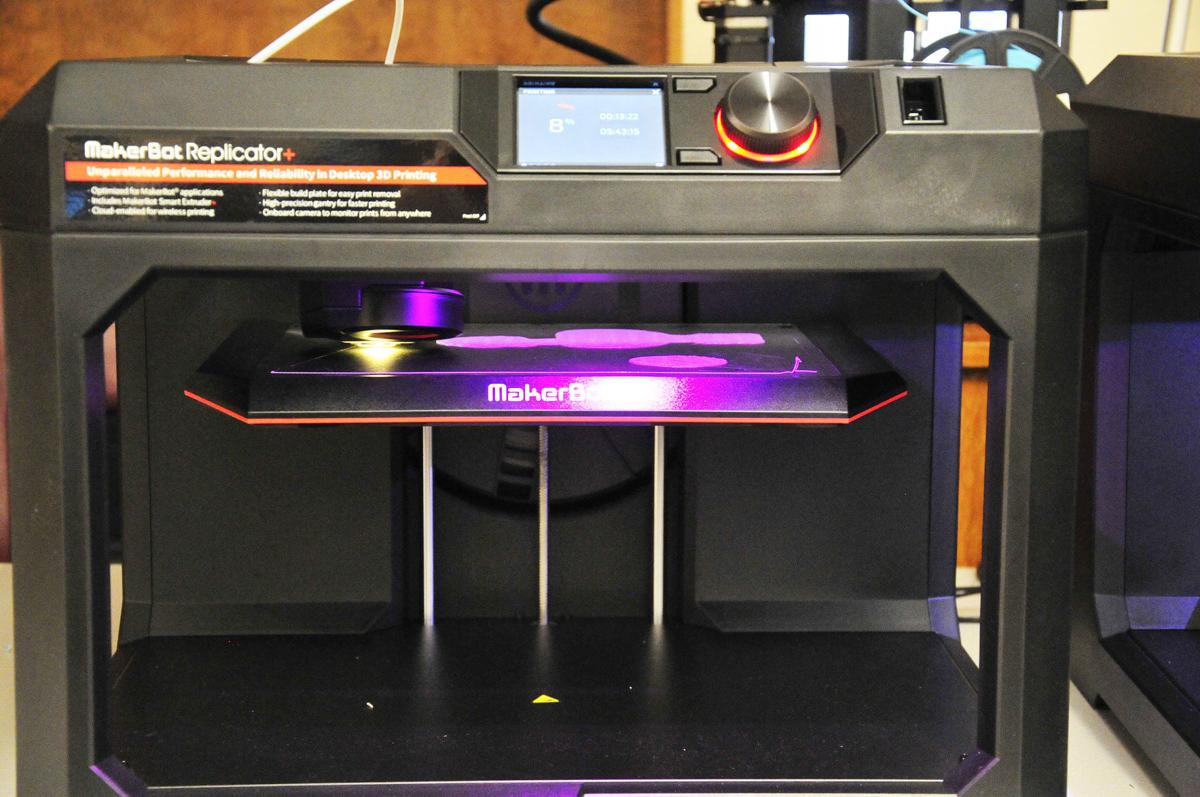 One of Reedsport Community Charter School's 3D printers works on printing models designed by the students. Four individual pieces were set to print in this batch.

The printers are being used in Bill Shaw's computers class, where students have been learning how to use the new technology. The printers came with a variety of colored filament as well as programs and software the students can learn to use. Shaw recalled that one was a standard 3D model program, while another lets the user draw out what they want with a digital pencil and have a 3D model built from that. There are also websites with projects for students to try at different difficulties.

One of Reedsport Community Charter School's 3D printers works on printing models designed by the students. Four individual pieces were set to …

"It's one thing to be able to watch a printer head put colored ink on paper and write out what you've typed up," said Shaw of how impressive the technology is. "It's a whole different thing to take a picture, turn it into a three-dimensional model, and it to create that model for you."

The printers are a learning experience for Shaw as well. He said he's been working out how to do everything with the machines and added that he's been trying to keep ahead of the students as they come up with new ideas of what to make.

One area where everyone learned was the need for scaffolding. As the printer runs, the plastic is laid out in a liquid state, which led to early attempts at some models collapsing or elements not forming properly. The machines can be told to build scaffolding around the final model to support it. The scaffolding is made of simple strands and easy to remove.

"I think the hardest thing for kids to conceptualize is that when you're building in 3D you're building in different planes, so you have to really move your piece around," Shaw said, noting that it's possible to make a model where things don't align quite right or aren't attached.

Shaw is excited for the future possibilities that 3D printing offers in the classroom. He said it's similar to the possibilities in woodshop and metal shop classes, with plasma cutters and similar automated manufacturing technology. These tools allow students to get a foot in the door for experience in manufacturing and computer development, expanding their knowledge base for the future. It also offers the opportunity for students to discover a passion that could turn into a future career.

"There's a pretty good chain of learning," Shaw said. "The fun part kinda baits (students) in, and the good part of that is that means I'm gonna get to stretch their mind a bit and make them learn something."

During January's school board meeting, Principal Jerry Uhling showed the board members some of the early designs made by students. One model was a jet airplane that a freshman student designed and programmed on his own.

"Needless to say, there's been a lot of buzz in Mr. Shaw's class over the last couple of days," said Uhling of how interested the students are.

Uhling plans to have students from the class come to a future school board meeting to present what they've learned and experienced to the board members. Students are expected to design and print their own custom project by the time they move on to other lessons.

Using the printers opens students to thinking about process design, resource management, production time, and other manufacturing considerations. It can also branch into learning about assembly line manufacturing as students print projects in separate pieces. Shaw said he would like to see this get into a production and manufacturing model where they make and sell things to raise money for the school. He suggested they could start building models or art and suggested making chess pieces on the printers and a board in the woodshop class.

Shaw said he saw the value of 3D printers to CTE classes and asked Uhling and Zwemke to get the printers. He said they were interested enough to give it a shot.

Shaw added that the students are also learning about the printers themselves and how they work. He said the kids are interested in how the printers function and are excited by the idea of taking an old 3D printer and trying to get it working again.

Shaw said he would love to see growth in the school's technology programs. He said the programs are fun and interesting for the kids, who have grown up in a tech-heavy world, but also gives them hands on experience in practical skills while they're young. These skills could spark in interest in something as a hobby and maybe even a career.

"This is kind of where industry is going," Shaw said. "There's so many different avenues where this can go."

Shaw added that growing tech skills is also important as a way to grow Reedsport's industry. With the mills closing, and timber industries moving away from the area, finding something to replace the job growth and income potential with becomes critical.

"It's just nice to give them all the skills we can, because there's not gonna just be a mill job they can go to once they graduate," Shaw said.

He added that he would love to see the students burn these printers out with how many projects they make.