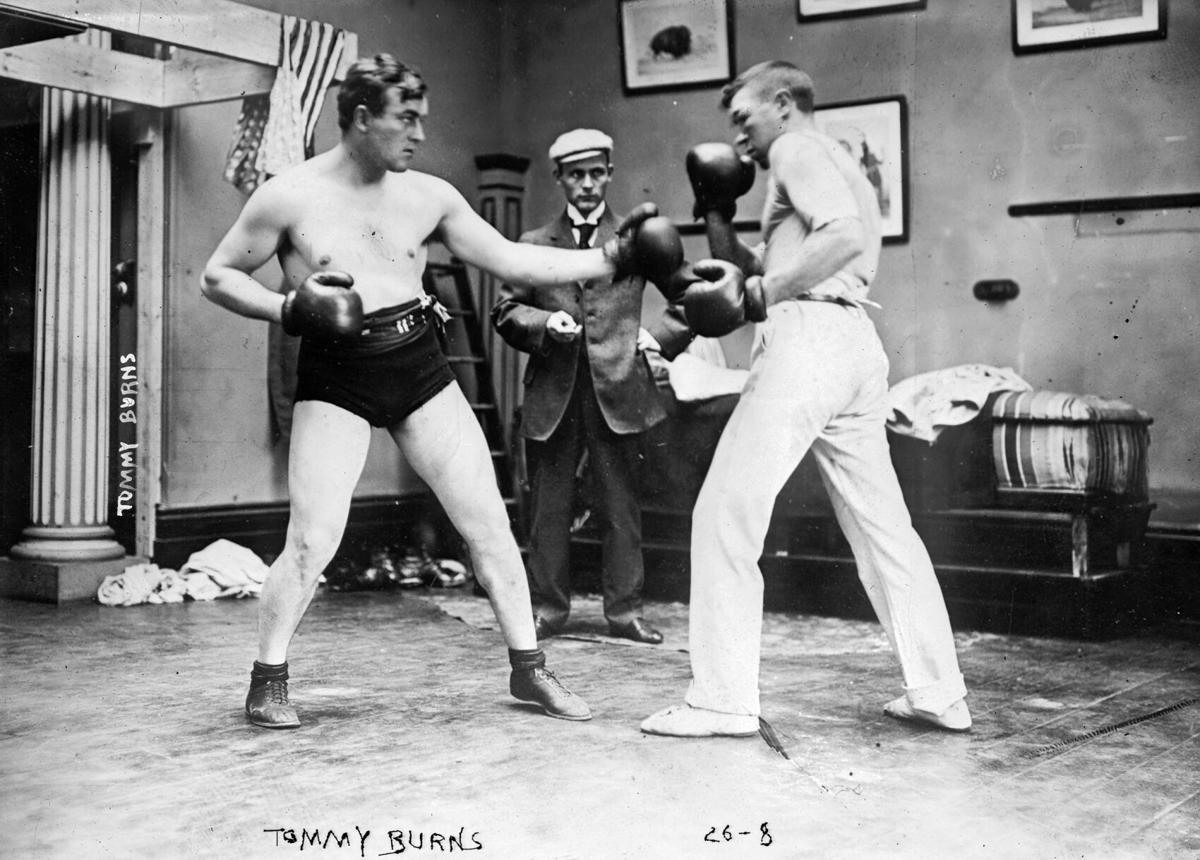 Tommy Burns (Noah Brusso) spars with a friend, circa 1905. (Image: Library of Congress) 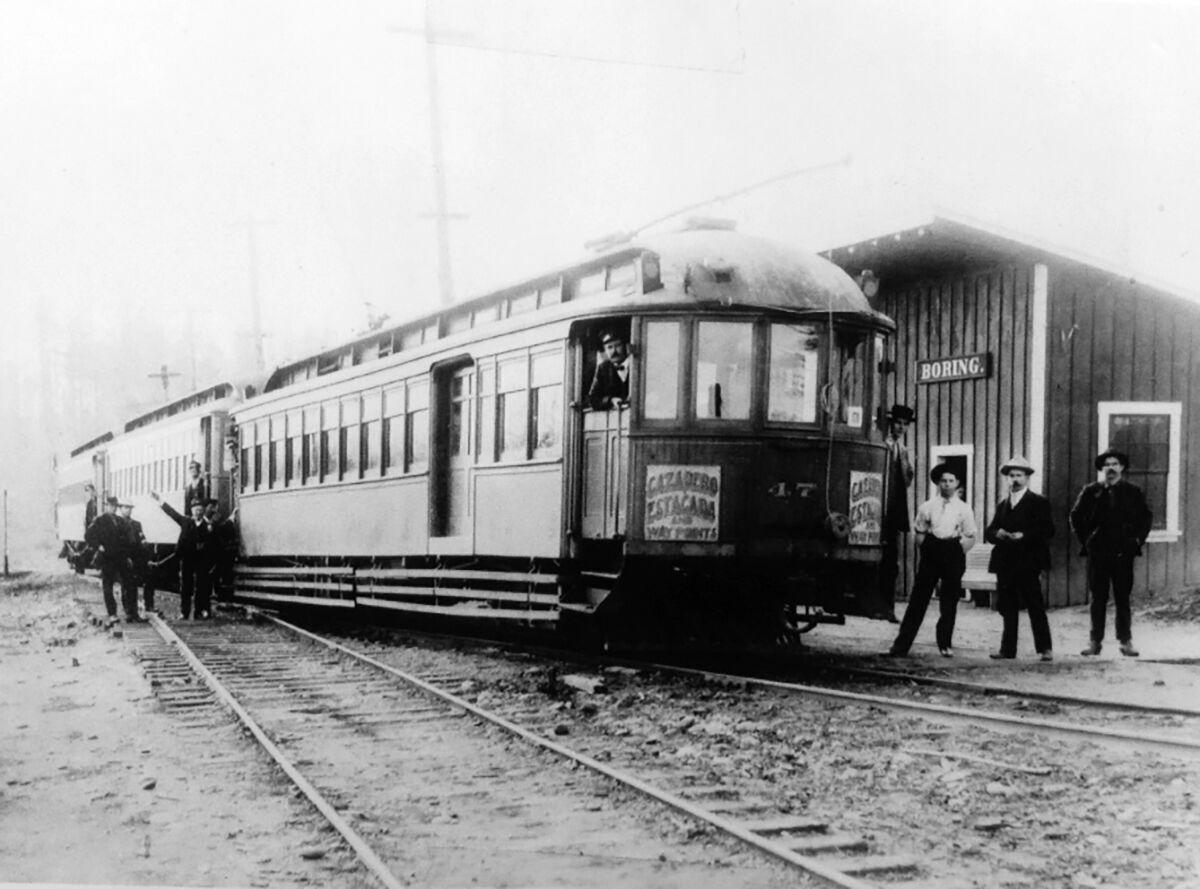 The railway station in Boring as it appeared in 1904. This would have been how the Portland spectators got to Boring to watch the Burns-Coldwell “fight.” (Image: City of Boring)

These headlines appeared the morning after the Burns-Coldwell “fight” in Boring, at the top of the front page of the Sunday Oregonian. (Image: UO Libraries) 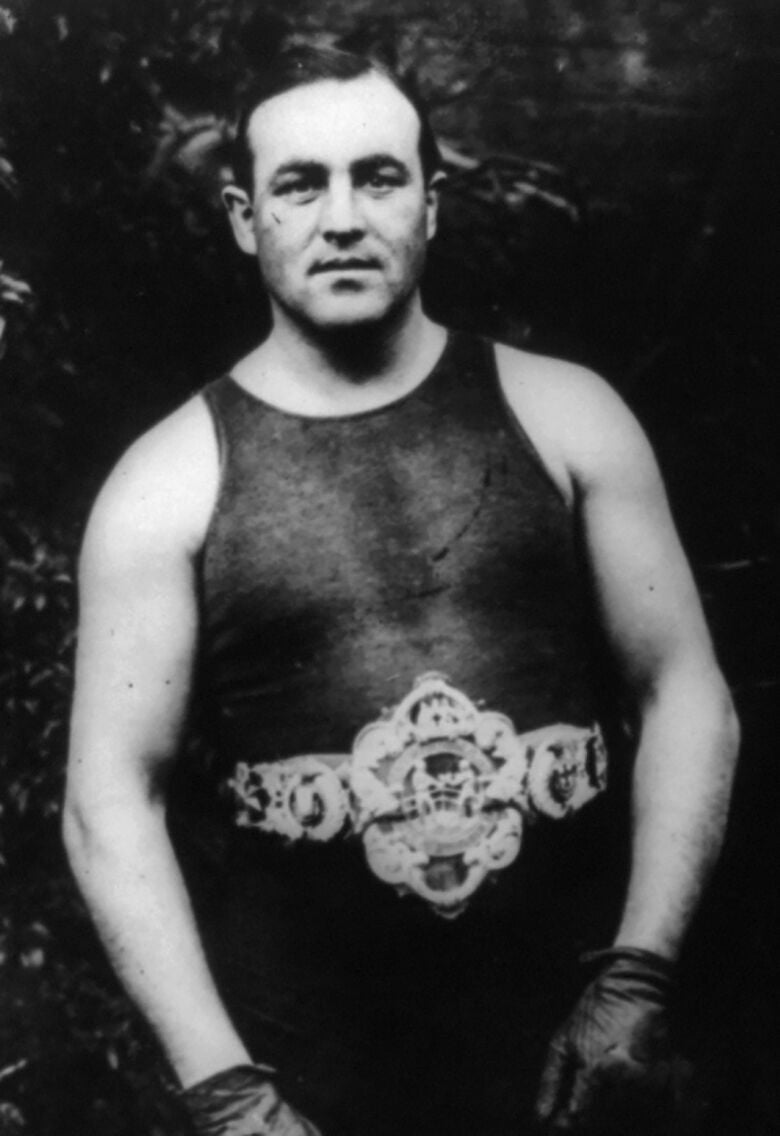 Tommy Burns (Noah Brusso) spars with a friend, circa 1905. (Image: Library of Congress)

The railway station in Boring as it appeared in 1904. This would have been how the Portland spectators got to Boring to watch the Burns-Coldwell “fight.” (Image: City of Boring)

These headlines appeared the morning after the Burns-Coldwell “fight” in Boring, at the top of the front page of the Sunday Oregonian. (Image: UO Libraries)

All through the summer of 1973, there was one song on the radio everywhere that you just couldn’t get away from: Jim Croce’s smash hit, “Bad, Bad Leroy Brown."

Come to think of it, it’s been very difficult to get away from that song ever since Croce wrote it. You probably are humming it to yourself right now: “Bad, bad Leroy Brown, baddest man in the whole damn town. Badder than old King Kong, meaner than a junkyard dog.”

The little Cascade-foothills town of Boring once had its own Bad, Bad Leroy Brown — although when the song came out, very few people then alive were old enough to remember him. His name was Free Coldwell — or at least, that was what he called himself. Like Leroy Brown, he a proud, strutting tough guy who got a humiliating comeuppance. But his downfall didn’t come from making a pass at “the wife of a jealous man” in a Boring nightclub or bar. No; Free Coldwell was taken down by the citizens of Boring, who basically played an elaborate practical joke on him — with the help of a professional prizefighter.

FREE COLDWELL BLEW INTO BORING sometime in late 1904, probably to work at one of the local sawmills. To judge from descriptions in newspaper stories, he was a bit like Bluto from the old Popeye cartoons — a big, burly man with massive, muscular arms and a hot temper. Unlike Bluto, though, Coldwell had bright red hair. And he claimed he was, or had been, a professional prizefighter.

He quickly made a name for himself as a bar-room brawler. Then, according to an article in the Sunday Oregonian, having successfully “walloped into dreamland” all the other aspirants to the title of Baddest Man In Town, he proceeded to make an absolute pest of himself. He swaggered around like — well, like Bad, Bad Leroy Brown on the south side of Chicago. If there had been such a thing as a custom Continental or an El Dorado in 1905, he doubtless would have had one.

Well, like most little timber-and-farming towns in pre-war Oregon, Boring had its share of tavern tough guys. But the vast majority of Boring residents were regular folks just trying to do their jobs and raise their families. Getting constantly lorded over by some cocky sorrel-topped gorilla was humiliating and frustrating. Something had to be done.

And that’s when someone opened a copy of the Portland Morning Oregonian and learned that Tommy Burns was in town.

Tommy Burns was a professional prizefighter from Canada, and if you were into boxing in 1905, you definitely knew his name. He was the up-and-coming heavyweight fighter, even though at 5 feet 7 and 175 pounds he was technically a light-heavyweight boxer. His nickname was “The Little Giant of Hanover.” He wasn’t the World Champion yet, but two years later he would be, and he’d hang onto the title, defending it against all comers, for two whole years.

Burns had a match coming up with Jack “Twin” Sullivan, and was doing some training for it in a local Portland gym. And it occurred to some of the citizens of Boring that perhaps Tommy Burns could be induced to come to their town for a little extracurricular boxing match, and teach the town bully some humility. And so a delegation from Boring hopped on the inter-urban train for the one-hour journey to Portland to make the pitch.

They didn’t have much of a purse to offer; after they’d passed the kitty around, there was only $4.90 in it — worth about $120 in 2021 currency. But the opportunity to help the townspeople dispense poetic justice to a swaggering small-town bully must have appealed to Tommy. He agreed to come out to Boring and take on Free Coldwell.

According to the Sunday Oregonian’s subsequent article about the fight, the good people of Boring placed only one restriction on Burns: He was not to risk killing Coldwell in the fight. Funerals, after all, were expensive.

NOW, TOMMY BURNS’ REAL NAME was Noah Brusso, so that was the name he used when he came to Boring. The townsfolk staging the show were worried that if Free Coldwell learned who he was battling with, he’d figure out a way to back out.

They might have been right. In any case, Coldwell took the bait in one gulp. He took one look at “Noah Brusso” — who was considerably shorter and a good 40 pounds lighter than he — and, as the Oregonian put it, “fell for it as easy as did Farmer Vance when he was gold-bricked out of $10,000.” Following a brief, truculent negotiation over who would cover the 75-cent venue rental fee — which he did not want deducted from the winner’s pot, which he confidently expected to win — he was eager and ready to go.

A boxing ring was put together in the local opera house, and the townspeople hired a professional boxing referee: Tommy Tracey, an almost-retired prizefighter originally from Australia.

On the big day, more than 100 Portlanders came out to see the show. It’s not clear how many of them thought they were going to see a real fight, and how many were in on the gag. Plenty of the residents of Boring knew, and it is possible that their success in keeping the secret from Coldwell was because they were unusually discreet, not because Coldwell was unusually gullible. But as the late John Prine might have put it, Coldwell clearly had muscles in his head that had never been used. He never suspected a thing until well into the fight.

Finally it was show time, and the gong rang, and the Boring Bruiser came charging out of his corner. “Brusso,” obviously playing to the crowd, held back, letting Coldwell get in a few punches and even going down a couple times. The crowd roared — those who were in on the gag with delight, and those who still thought this was a legitimate boxing match with astonishment. They could see that Coldwell was a terrible boxer. Was the great Tommy Burns losing his touch?

No. No, he was not. At the end of the fourth round, “Brusso” decided that it was time to spring the trap. Accordingly, he put a hard straight right past Coldwell’s guard with proper professional snap. It exploded on Coldwell’s nose and, as the boxing press of the day often put it, “started the claret.” And this appears to have been the moment when Coldwell realized he was in some serious trouble.

The gong sounded, the round ended, and Coldwell got a little time to think about things while he dealt with his nosebleed. In light of subsequent events, there’s certainly a decent chance that one of the thoughts that passed through his mind was the possibility that he might end the match by faking a foul.

All too quickly, it was time for Round Five. Right away, “Brusso” clinched and then broke away with a body blow to Coldwell’s midriff. It wasn’t a hard hit, but Coldwell wasn’t expecting it and was not ready for it.

“Just as soon as the red-headed piker could get his breath, he howled, ‘It’s no fair to hit a man in the stomach,’” the Oregonian reported. “’That’s a foul!’”

Coldwell jumped out of the ring to stop the fight while he pressed his suit. Nobody was impressed, least of all the referee: “Tommy Tracey almost threw a fit,” the Oregonian reported.

Tracey told Coldwell to shut up and that if he wasn’t back in the ring in two minutes, “Brusso” would be declared the winner.

“The clock was started, and the crowd waited with anticipation,” author Bruce Haney writes in his new book, Eccentric Tales of Boring, Oregon. “The townsfolk had put a lot of effort into this fight. They did not want Free Coldwell dead, but they did want him maimed. A bloody nose and a punch to the stomach did not live up to the beating they had plotted for him. But the clock ran out, and Free Coldwell did not get back in the ring.”

So Tracey raised Burns’ arm and declared him the victor.

IT WAS PRETTY OBVIOUS to everyone what had happened: After figuring out how severely outclassed he was, Coldwell was trying to use this “foul” as a pretext for withdrawing from the field. They probably all assumed he knew perfectly well that body blows were not fouls, and figured he was pretending ignorance because he’d become desperate for an excuse to disengage.

If so, it sure didn’t work very well. Unlike Bad, Bad Leroy Brown, Free Coldwell did not look “like a jigsaw puzzle with a couple pieces gone” after this fight; but his reputation sure did.

“Today and for many days to come the good citizens of Boring will congratulate themselves,” the Oregonian’s reporter wrote. “They have rid themselves of the town pest. Their only regret is that Coldwell did not get the beating they had mapped out for him.”

Their regret was probably short-lived. The article about the fight appeared in the Sunday Oregonian the very next morning, at the very top of the front page, under a giant headline reading, “JUST A QUITTER: Boring’s Town-Terror Done by Prize Fighter.”

“When He Gets a Blow in the Stomach, Free Coldwell Screams ‘No Fair,’ and Quits for Good,” one of the sub-headlines added.

After that, there was no way Free Coldwell could stay in town and face the people he’d been lording over for the previous few months. It’s not clear how long he stayed in Boring after this humiliation, but it was probably a matter of hours. And as author Haney puts it, “there are no references to Free Coldwell harassing the town of Boring again.”

Finn J.D. John teaches at Oregon State University and writes about odd tidbits of Oregon history. His book, Heroes and Rascals of Old Oregon, was recently published by Ouragan House Publishers. To contact him or suggest a topic: finn@offbeatoregon.com or 541-357-2222.

Offbeat Oregon: Not all fugitives hiding out in Oregon were running from the law

Sometime in 1915, a 40-year-old Black woman named Frankie Baker stepped off the train at Portland’s Union Station. She had come to stay; Orego…