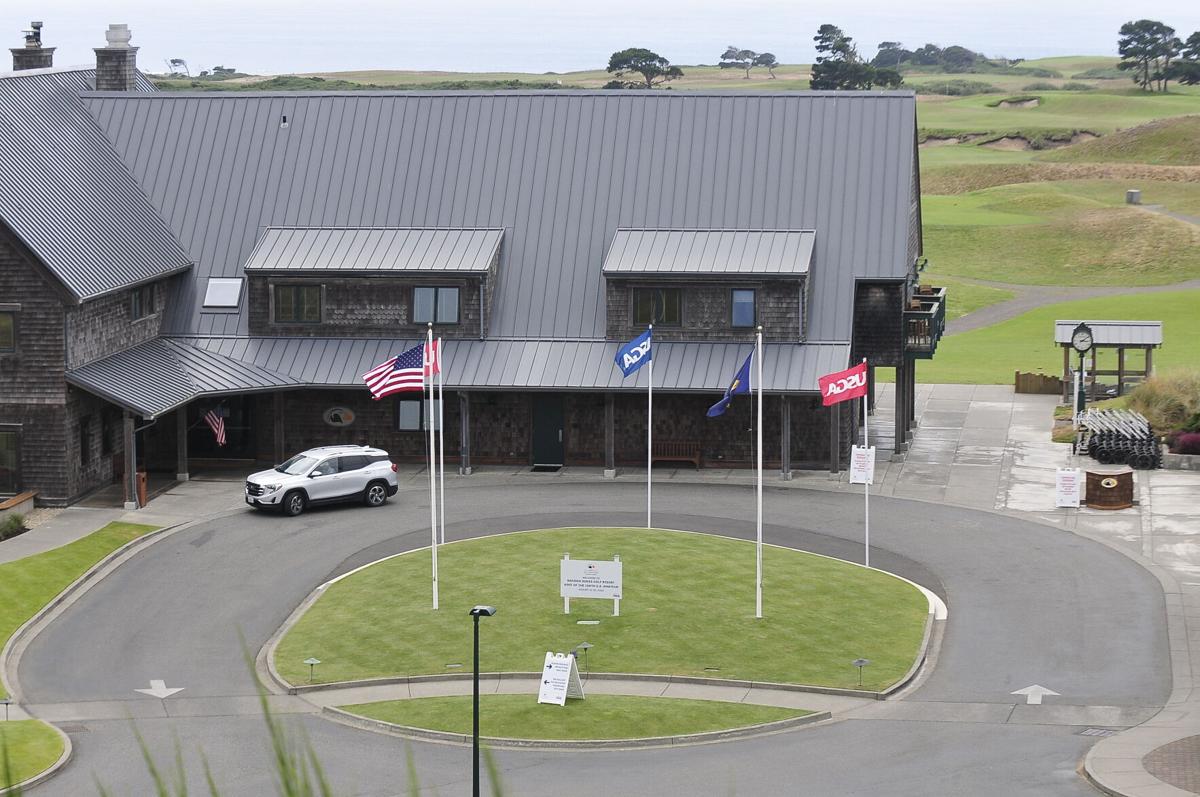 The United States Golf Association flags fly along with the national and state flags in front of the Bandon Dunes lodge this week in advance of the U.S. Amateur, which starts Monday at the resort. 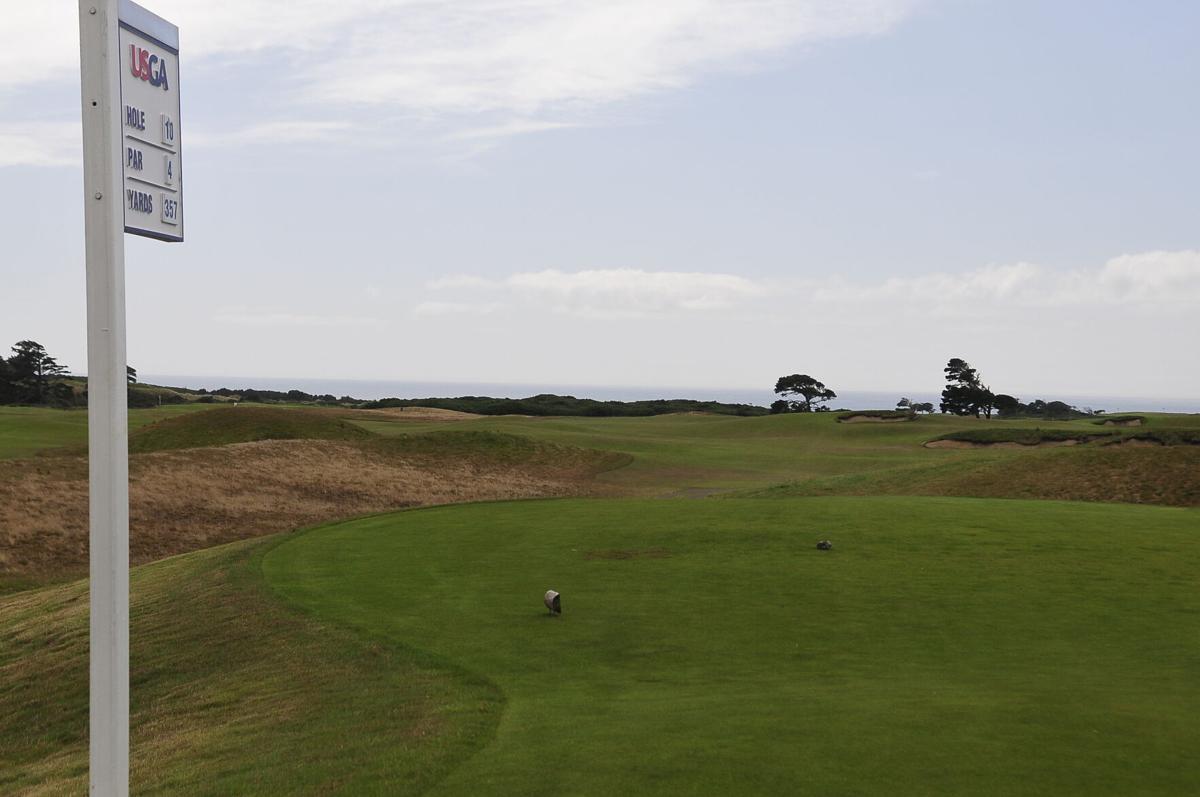 The USGA sign post gives the yardage for the 10th hole at Bandon Dunes for the U.S. Amateur, which starts Monday.

The United States Golf Association flags fly along with the national and state flags in front of the Bandon Dunes lodge this week in advance of the U.S. Amateur, which starts Monday at the resort.

The USGA sign post gives the yardage for the 10th hole at Bandon Dunes for the U.S. Amateur, which starts Monday.

This week, the resort hosts its seventh United States Golf Association championship — qualifying for the U.S. Amateur begins Monday on the Bandon Dunes and Bandon Trails courses and the tournament continues through Sunday.

The concept of so many champiopnships is staggering, especially considering all seven have come in the past 15 years.

“It doesn’t feel like it’s that frequently,” said Jeff Simonds the director of resort operations, who has been the lead coordinator of the event for Bandon Dunes. “It’s something we’re very proud of.”

No other facility has hosted as many USGA events in the 2000s as Bandon Dunes. Pinehurst Resort in North Carolina has hosted six. Few others have hosted more than three.

The U.S. Amateur continues the great relationship USGA has with Bandon Dunes and its owner, Mike Keiser, who has been mentioned in the past as one of the best supporters of amateur golf in the country.

“Our focus is the amateur golfer and those golfer who play for the spirit of the game,” Simonds said.

As amazing as it is for one resort to host so many USGA events, it’s also amazing that they all have been different, which ties Bandon Dunes with Homestead in Virginia for the most different USGA events held at one site.

“This speaks about the ability of Bandon Dunes Golf Resort to provide a championship experience to so many different types of golfers,” Simonds said. “I don’t think there’s a USGA championship that couldn’t be hosted here.”

Logistically, it’s unlikely Bandon Dunes could host the two biggest USGA events, the U.S. Open and the U.S. Women’s Open, because the entire South Coast likely doesn’t have the infrastructure including enough hotel rooms for all the fans those two events would likely draw.

But the quality of the golf courses is not in question. Generally, the U.S. Amateur is only contested at golf courses that also would be fitting hosts for a U.S. Open.

The collection of events Bandon Dunes has hosted is impressive.

The first was the 2006 Curtis Cup, an international event that is the amateur women’s version of the Ryder Cup. The second was the 2007 U.S. Mid-Amateur which Keiser considers one of the premier amateur events because it is for golfers who remain amateurs after college, rather than turning professional.

Just that Bandon Dunes has partnered with USGA so often shows Keiser’s passion for the amateur game and fondness for the organization, Simonds said.

“It doesn’t make financial sense … giving up the golf course in August,” Simonds said. “That’s what’s amazing about Mike. He doesn’t do it for notoriety. He does it because he loves the game of golf and USGA upholds the traditions and standards of golf.”

Simonds and others at the resort have been planning for this week since 2015, when the tournament was announced during the Women’s Four-Ball.

“We’ve been excited for a little more than five years,” Simonds said.

“We didn’t quite imagine this.”

Because of the COVID-19 pandemic, the U.S. Amateur is unlike any other tournaments the resort has hosted.

“It’s changed every phase of the championship,” Simonds said.

To create as safe an atmosphere as possible, access to the tournament will be limited. All people involved in the event — from the golfers to the caddies to the USGA officials to the resort employees to the media — have to twice test negative for coronavirus to be included in the tournament bubble (the same goes for the resort’s hospitality and agronomy staff helping this week.

The participants are limited to two guests each, including a caddie if they choose to have one. The resort had more than 700 volunteers lined up and had to turn them all away. USGA typically would send a staff of 125 to run a championship of this stature and instead has just 50.

To learn more about the safety measures put in place this week, see read a story that will be included in Tuesday’s edition of The World.

Perhaps the biggest disappointment to the changes for Simonds is that the event won’t be as big a natural promotion for the South Coast as resort officials had envisioned.

Originally, the resort only planned to allow USGA officials to stay on site during the event, with what would have been 312 players (the field was reduced to 264) having to find lodging in area hotels. Now those players are limited to the resort and three specific motels for where they can stay.

“Our goal was to really light up the South Coast and work with the tourism groups,” Simonds said. “Obviously, when COVID hit in March, that took all that out of the equation.”

But resort officials came up with another way for the event to have a positive impact. Working with the Oregon Golf Association, they put together a package specifically for people who had planned to come as volunteers to be able to play any of the resort’s three courses not used during the event at a special rate — and some 3,000 rounds were booked for next week at those courses, Simonds said.

Those people won’t be staying at the resort and many will be dining and shopping on the South Coast.

“We still wanted there to be a net gain for the community,” Simonds said. “And it’s a way to thank the volunteers who were planning to come.

“We hope to (still) promote how great the South Coast is.”

For Simonds and the rest of the planning staff, this week has been a long time coming. There are no other USGA events currently scheduled for the resort, though most of USGA’s championships are only scheduled a few years in advance (the big ones including the Amateur, the U.S. Open and Women’s Open and the international events the big exceptions).

And amazingly, the Amateur is only the second USGA event that will use the Bandon Dunes layout — Bandon Trails, Pacific Dunes and Old Macdonald have all been used for at least three either during the qualifying rounds or the match play rounds.

“Bandon Dunes is my favorite course,” he said. “I can’t wait to see how the world’s best amateurs play it.”

Keep up with the tournament

Though South Coast residents won’t be allowed to come out to watch the tournament this week, they still can follow it with daily television coverage after the match play portion begins Wednesday.

On Wednesday through Friday, an hour of coverage will be shown on NBC’s new Peacock Network, a free online service, starting at 3 p.m. before two hours of live coverage on the Golf Channel from 4 to 6 p.m.

The Golf Channel also will air coverage of the semifinals and championship match from 4 to 7 p.m. Saturday and Sunday.

USGA also constantly updates scoring from the tournament at www.usga.org.