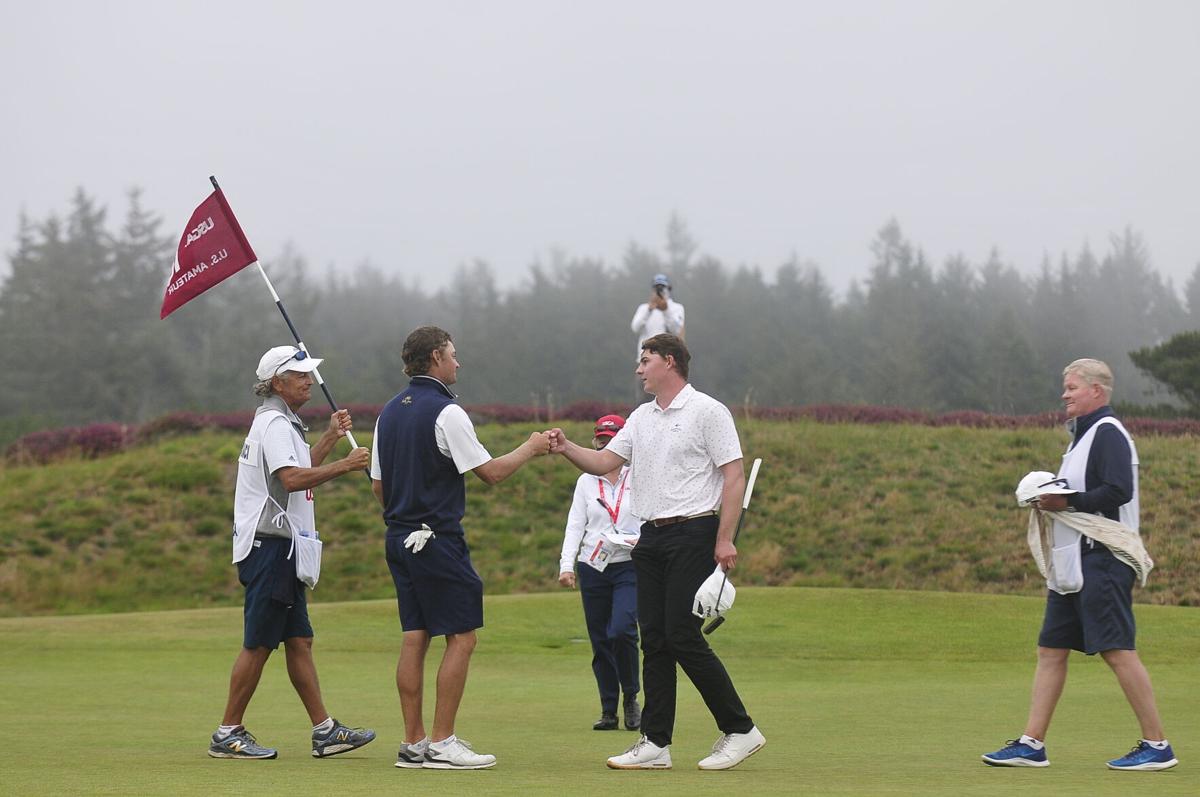 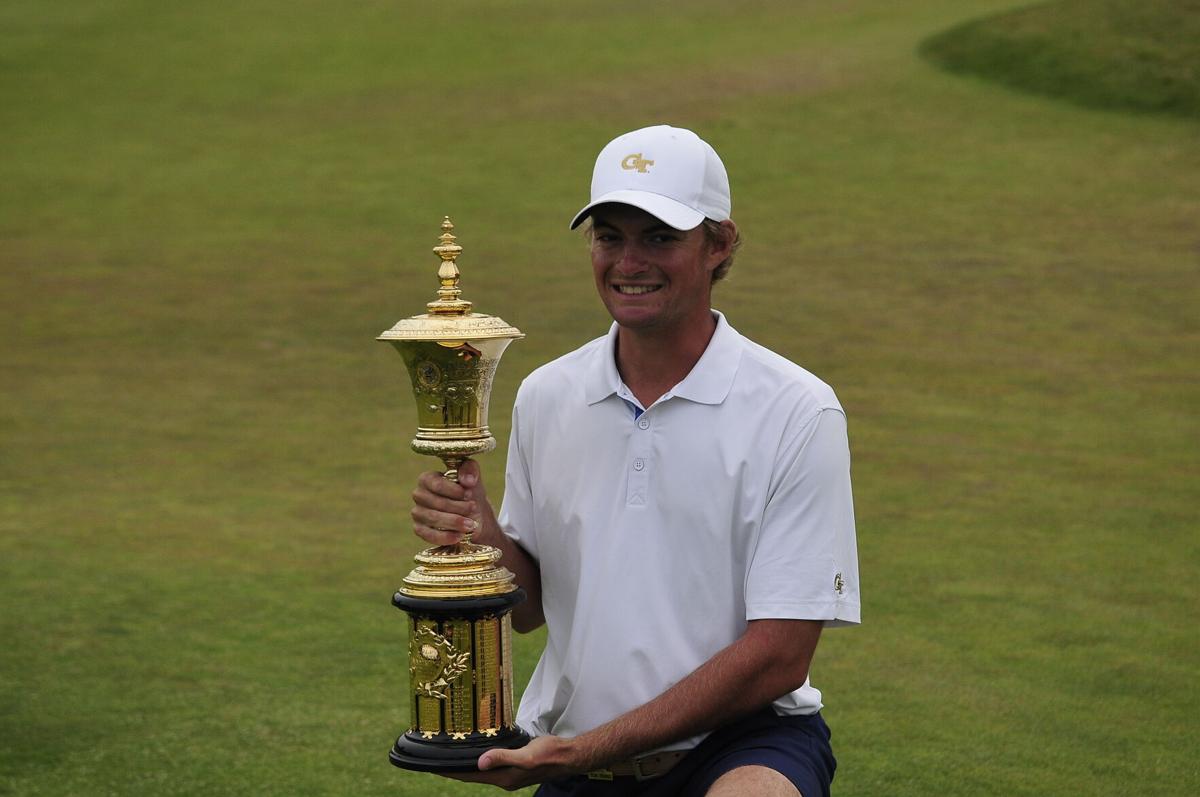 Tyler Strafaci poses with the Havemeyer Trophy after winning the 120th U.S. Amateur at Bandon Dunes Golf Resort on Sunday. 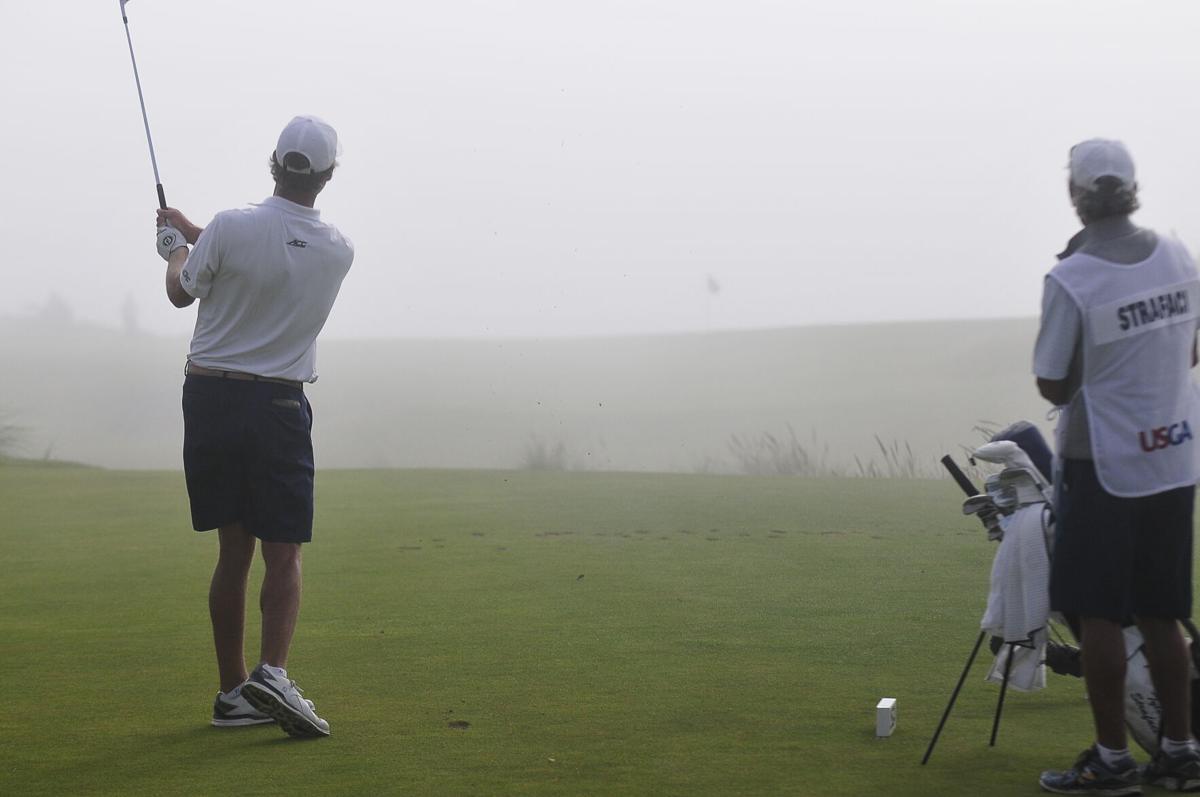 Tyler Strafaci follows the flight of his tee shot through the thick fog on the 12th hole Sunday.

Tyler Strafaci poses with the Havemeyer Trophy after winning the 120th U.S. Amateur at Bandon Dunes Golf Resort on Sunday.

Tyler Strafaci follows the flight of his tee shot through the thick fog on the 12th hole Sunday.

Strafaci hit a 4-iron from 245 yards to 25 feet on the 18th hole to set up a two-putt birdie and a 1-up win over Charles “Ollie” Osborne on the Bandon Dunes course, capping a match that saw Strafaci fall down by five holes early, rally to take a two-hole lead with three holes to play in the 36-hole final, then fall back into a tie after conceded birdies to Osborne on the 16th and 17th holes setting up the dramatic final hole.

Before his 4-iron shot, Strafaci took a few moments to compose himself, then as the ball left the club face, he yelled, “Please be good.”

Strafaci said it was the first time in his life he told himself he was going to hit a winning shot and then executed it.

Osborne was a little bit closer to the green on the par-5 after his tee shot, but left his 5-iron short and right of the green and wasn’t able to get up-and-down to match Strafaci’s birdie.

Osborne said he had no regrets after the final.

“I thought I played well,” he said. “We both played well. That was fun.”

The players were competing in their sixth matches in five days after qualifying rounds last Monday and Tuesday on the Bandon Dunes and Bandon Trails courses.

And they played phenomenally well on what started as a near-perfect day with sunny weather and little wind — the second straight almost windless day at the resort — before the marine layer moved in for the final nine holes, leaving a layer of fog thick enough that the players couldn’t see the greens with their tee shots on several late holes.

Osborne came out on fire in the morning round, with birdies on the first three holes, two of which he won (Strafaci matched his birdie on the third hole). He had his biggest lead at 5-up after three consecutive birdies on Nos. 10 through 12.

“It was fun to watch,” Strafaci said of Osborne’s quick start. “He played great. He didn’t miss a shot.”

Strafaci never panicked when he trailed early. On Saturday he had a late four-hole lead against Amon Gupta only to see Gupta tie the match before Strafaci won the 18th when Gupta took three shots to get out of a fairway bunker.

“Yesterday was the best thing for me — giving up that four-hole lead,” he said.

In Sunday’s final, Strafaci said his putter got hot as the morning went on and the tide started turning.

Strafaci won four of the final six holes in the morning round and then pulled even when he rolled in a 30-foot birdie putt on the par-3 20th hole.

Strafaci then rolled in a curving birdie putt from off the green to match Osborne’s birdie on the par-5 21st hole and took his first lead with an 18-foot birdie on the 25th hole.

Osborne nearly aced the par-3 30th hole — the first where the players couldn’t see the green completely because of the fog — but Strafaci matched his birdie. Osborne pulled even with a two-putt birdie on the next hole, but then Strafaci drove the par-4 32nd hole and made the 7-foot eagle putt to go back in front.

Strafaci later called that the biggest putt of the match because Osborne, who had missed the green to the left, made a 30-foot birdie putt and Strafaci needed the eagle putt to win the hole.

He won the next hole, too, when Osborne was long on the par-3 and took three additional shots to get to the green, the first two rolling back down the slope to him, and eventually conceded Strafaci’s par putt.

That left Osborne trailing by two holes with three to play, but he caught up with a great tee shot just off the green on the par-4 34th hole (Strafaci was in a bunker off the tee and hit his second shot over the green) and a great second shot to inside 10 feet on the 35th hole (Strafaci ended up in the hazard with his approach shot and the follow-up shot).

“I forced him to hit a really good shot and he did,” Strafaci said of Osborne’s tee shot on the 34th hole, adding that he could tell from the clapping by onlookers at the green on the 35th hole that Osborne had hit another good one.

Osborne said he was glad to tie the match late, even though he eventually lost.

“I’m really happy with the way I came back at the end,” he said. “It’s always going to be disappointing to lose.”

Both players viewed the final as a great match.

“That had to be the most competitive, fun match I’ve every played,” Strafaci said.

The two players combined for 25 birdies and an eagle during the 36-hole final.

Strafaci, who had his last four matches all decided on the final hole, is the second straight Georgia Tech player to win the Havemeyer Trophy (Andy Ogletree won it last year) and fourth overall, also joining Bobby Jones and Matt Kuchar. Osborne was nearly the fifth winner from Southern Methodist University since 1998.