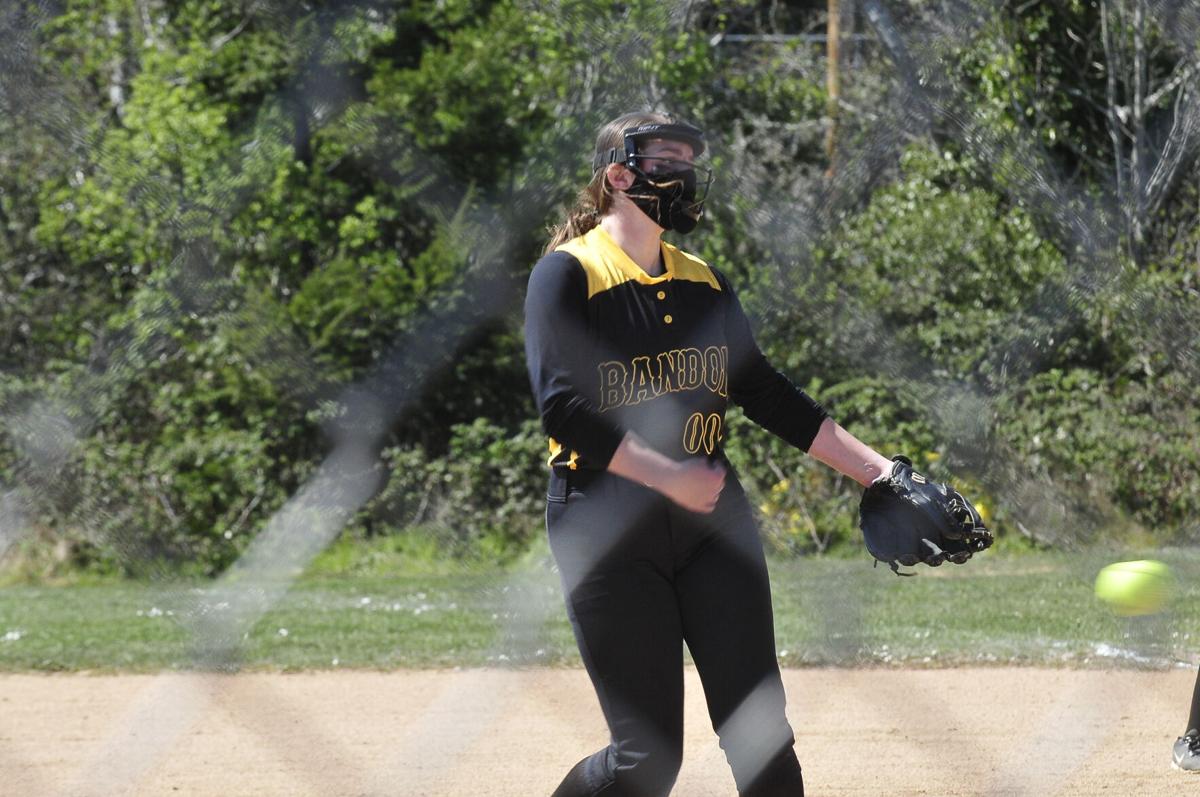 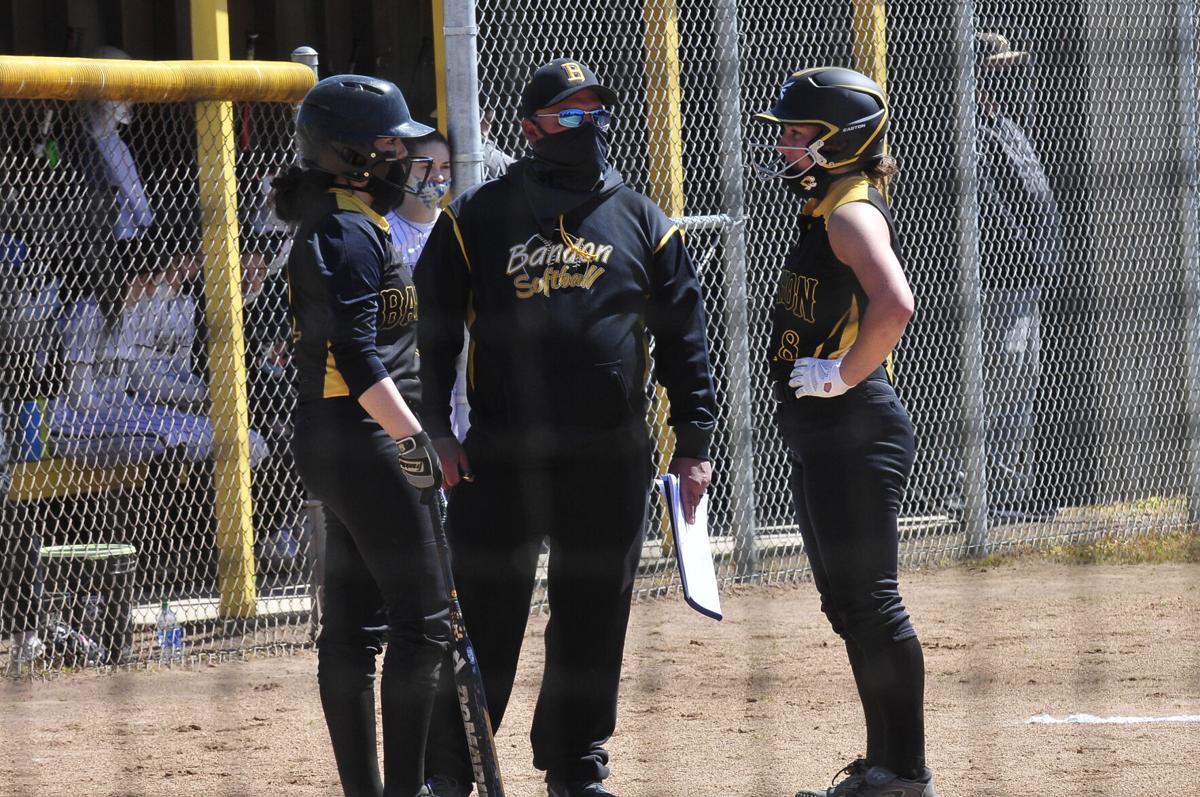 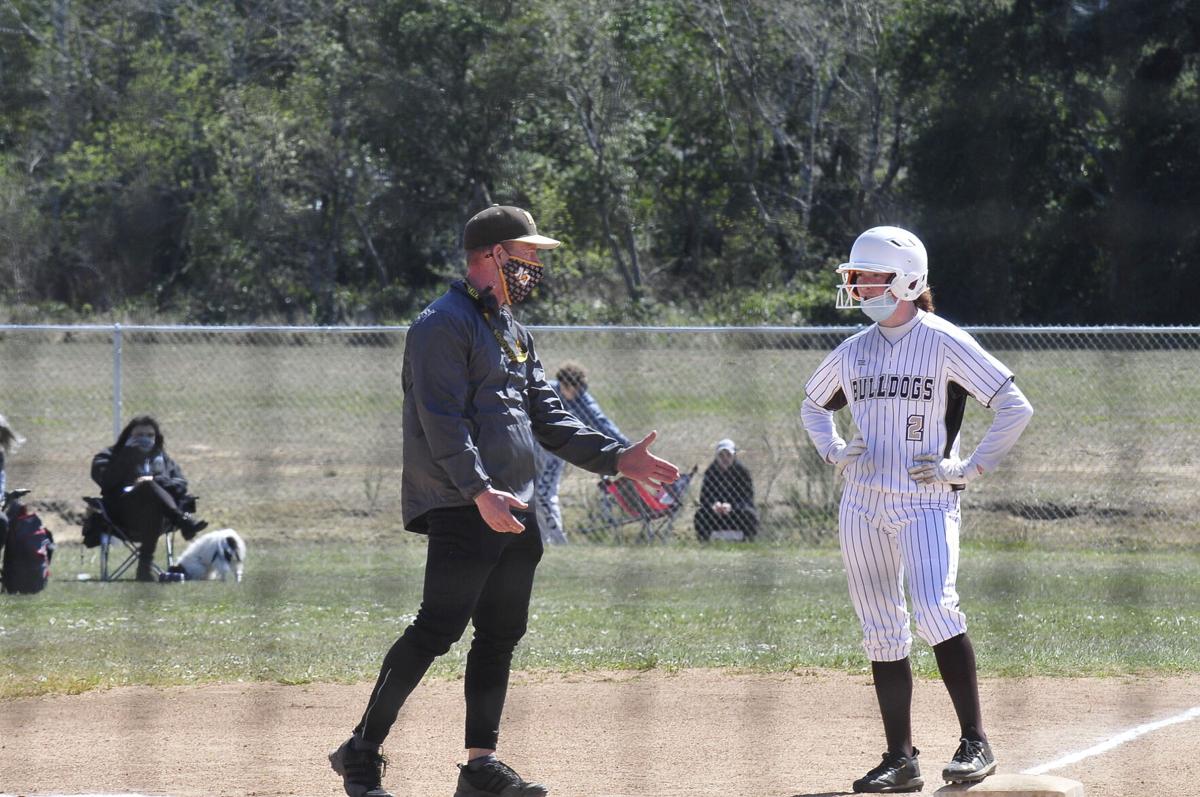 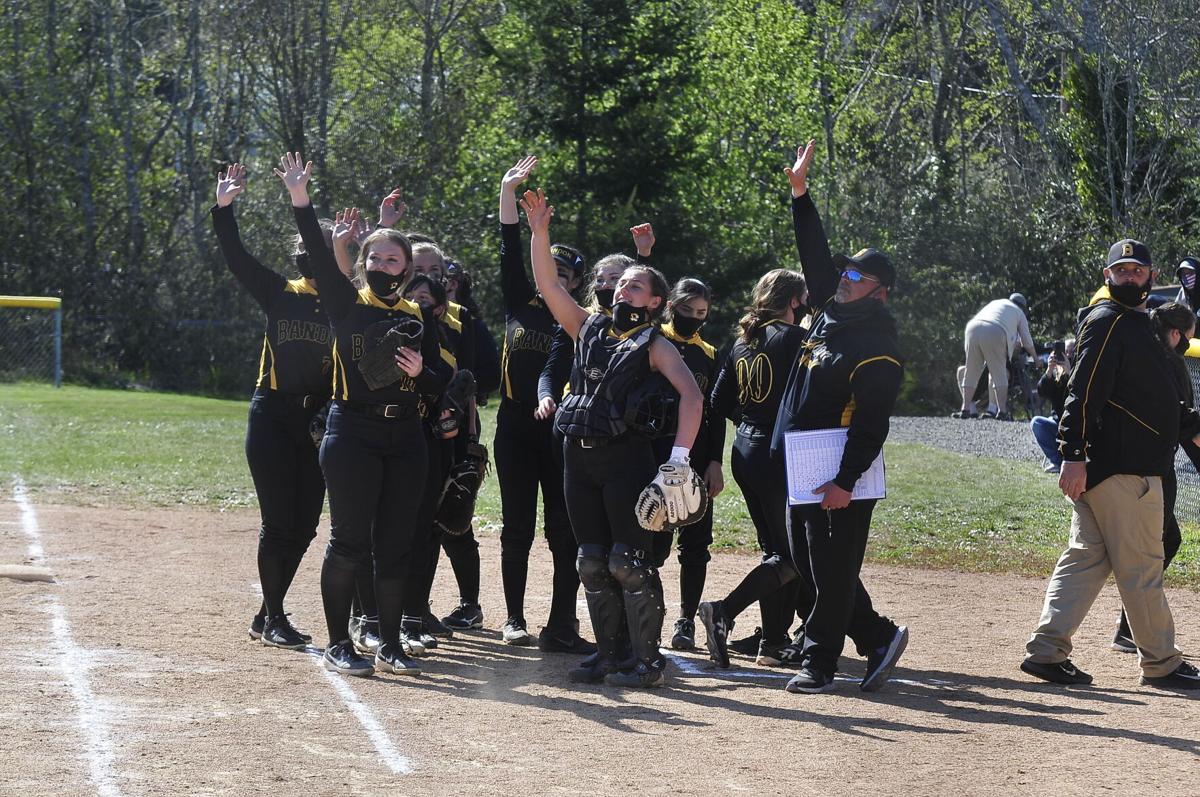 Bandon's players wave to North Bend's team at the end of Tuesday's game. The group wave is the COVD-19 style for teams to congratulate each other after contests.

Bandon's players wave to North Bend's team at the end of Tuesday's game. The group wave is the COVD-19 style for teams to congratulate each other after contests.

NORTH BEND — The Bandon softball team hadn’t played a game in nearly two years, but you couldn’t easily tell that Tuesday, when the Tigers beat host North Bend 5-3 in the season opener for both teams.

The Tigers overcame an early 2-0 deficit, took advantage of free passes by the Bulldogs and played solid defense behind veteran pitcher Avery Pounder to deny North Bend any chance of a comeback.

“I’ve been pushing that we’ve got to have defense to compete,” Gallagher said. “The hitting will come.”

For much of the game Tuesday, the Tigers weren’t hitting. But they were taking advantage of what was given them.

Bandon’s first two runs came through a hit-by-pitch and four walks. Their next two, an inning later, came from four more walks and a North Bend error. Those runs were scored by Sterling Williams and Kadence Teel.

To that point, Bandon didn’t have any hits.

The first came in the fourth on a single by Bella Erenfeld. But North Bend’s defense recorded three straight outs.

An inning later, Angie Morones had a single to right, where an error allowed her to get all the way to third base. She later scored on a wild pitch.

The Tigers didn’t need any more offense because of their defense and the work on the mound by Pounder.

“It was a really good first game,” Pounder said. “I’m so excited to see what we’ll do this year.”

Pounder struck out six and didn’t allow a North Bend hit after the third inning. That’s when Kira Young got her second single of the game and her second run. Just like her first hit, to lead off the first inning for North Bend, Young scored on a groundout by Mia Reynon.

The Bulldogs got two runs in the first inning. An out after Young’s single, Katie Holmes walked. Holmes scored on a single by Jordan Nelson.

Pounder said she was proud her teammates didn’t let the early 2-0 deficit get to them.

“I’m glad we didn’t get down and were able to come back from that,” she said.

Given the long layoff — the Tigers didn’t get any games in last year before the pandemic stopped the season — Gallagher was particularly impressed.

“I’ve got a team full of juniors, but most of them are really sophomores,” he said, speaking of the relative experience of the players.

The exceptions are Pounder, who is one of the juniors, and catcher Sterling Williams, one of the three seniors, who play on a traveling team together and have had plenty of work. Plus the other two seniors, Bella Erenfeld and Elizabeth Gallagher, the coach’s daughter.

The Tigers committed a few errors, but generally were outstanding in the field, including a double play to end the sixth inning that left the players screaming with excitement as they left the field.

“They made plays,” he said.

And Bandon used what the Bulldogs gave them.

“We made too many walks early and they took advantage,” he said.

But Olson is excited about his group, too.

“There’s a lot of things we did all right,” he said.

North Bend’s defense was good for most of the game and the Bulldogs made better contact with the ball later in the game, though Bandon did a good job containing all those hits.

The Bulldogs have potential for a strong season, Olson said.

“I’d rather lose with good kids than win with (bad ones), and we have great kids,” he said. “These kids are going to come back tomorrow and work on what we need to.”

COQUILLE 18, MYRTLE POINT 4: The Red Devils got a stellar outing on the mound by senior Ellie Ekelund and three doubles and four runs from Emily Cortez to beat the visiting Bobcats in the season opener for both teams.

Ekelund pitched a three-hitter with no walks and nine strikeouts. She also had three runs, as did Courtney Sanders.

“It was really nice to get back on the field,” Coquille coach Darren Thompson said. “It was obvious we all could have used more practice time.

“All in all, I was proud of the girls. It was a good start for the kids.”

ELMIRA 22, MARSHFIELD 8: The Falcons beat the host Pirates in the season opener Tuesday.

“Even though the score was ugly, I don’t think that really reflects the level that this team is capable of playing,” new Marshfield coach Chelsea Burns said, noting that the starting pitcher and catcher were freshmen — Jayla Johnson and Gracie Peach.

“I felt like the performance from the freshmen was more than the coaching staff could have asked for,” Burns said. “Cedar Ward was our lone senior (who started) and she had a great game. There were a lot of heads-up plays early on that showed our true ability when we play as a team.”

Alaina Sullivan went 4-for-4 at the plate and scored two runs for the Pirates. Ward and Makenna Johnson also scored two runs and Marissa Barrera had two RBIs. Peach had two hits, a run and an RBI.

“Elmira had a solid offense and it just got away from us,” Burns said. “Overall, there was a lot of good things that happened that I would only expect during the middle of the season and later, not after seven practices together.

“A lot of credit needs to be given to Kevin Guthrie, Katelyn Rossback and Bill Otton for helping organize these girls in the fall for the mini-season against North Bend. There is a lot of potential with this team and I am glad to get the first-game jitters out of the way.”

Marshfield is back in action Friday, with a doubleheader at Junction City.