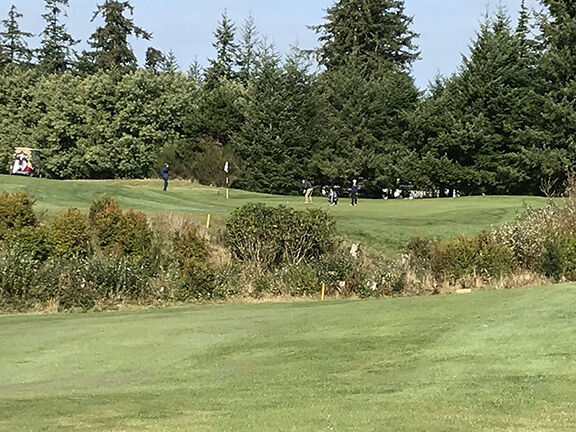 A group tries to ake a putt on the fourth hole at Bandon Crossings during the Greenskeeper’s Revenge tournament last weekend. The pin, like on most of the holes, was tucked up near one of the edges of the green on a challenging slope. 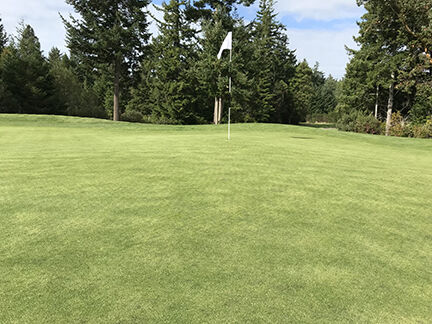 The pin on the ninth hole was place right atop a ridge.

A group tries to ake a putt on the fourth hole at Bandon Crossings during the Greenskeeper’s Revenge tournament last weekend. The pin, like on most of the holes, was tucked up near one of the edges of the green on a challenging slope.

The pin on the ninth hole was place right atop a ridge.

BANDON — Since it opened more than a decade ago, I’ve been a fan of Bandon Crossings golf course.

I love the layout of the course south of Bandon, including the variety of holes and how visually appealing they are.

And I’ve enjoyed reporting on the events at the course, including various high school and junior tournaments and the regular season events — the Wacky Wednesdays and Casual Fridays games and the annual Crossings Cup.

For years, I’ve been intrigued by one of the fall tournaments, the Greenskeeper’s Revenge. Every time I’ve played the course, it’s been in great condition, and I’ve often wondered how difficult they could make the course, with the pin placements and the position of the holes on the greens.

But the fall hasn’t been a good time for me, usually because of other activities I cover.

With all high school sports on hold this year, I finally got to experience the event first-hand last weekend, teaming with a group of fellow Coquille residents — teachers Don Swenson and Tyler Lienemann — and junior golf standout Carter Borror.

I figured we could do OK because Carter spent the summer making a name for himself at the course by reaching the semifinals of the Crossings Cup and all four of us and has great course knowledge, while Don has been Coquille’s golf coach for a number of years, a role he hopes to pass on to Tyler.

My only concerns were how tough the course would be and the other element that makes the tournament difficult — the Las Vegas Scramble aspect, which puts chance into play for which player’s drive the team has to use on each hole based on the roll of a die.

We did pretty well with the die during the day, the exception being on the par-3 14th hole when we rolled the number of one of our players (there were more than one) who hit the ball into the hazard, leading to a double-bogey.

But we had no control over the challenging pin placements, which were nearly all within a few feet of the edges of the greens, at tough angles to get to, placed on or near ridges, or some combination of all those elements.

The terms most often repeated by our group were “diabolical, nasty, mean and funny.”

We all just laughed when we got up to the par-3 ninth green and found the pin perched atop a ridge where getting the ball to stop near the cup on any putt that didn’t go in was extremely difficult — Don and I went first and our putts stopped rolling some 15 feet down the other side of the ridge.

It was everything I imagined.

Even with Carter’s outstanding knowledge of the greens and our skills as decent putters, we only managed two birdies. I had hoped for more, but we burned the lip of the hole on several holes — I thought we had made at least six more with some of the putts that we hit, only to watch them sneak by the edges.

I knew we couldn’t contend for the team prizes. There are a bunch of very talented regulars at Bandon Crossings and the group of Steve Harris, Martin Weaver, Neal Brown and John Murphy shot a 12-under-par 60. Four other groups shot at least 10-under.

The quality of the players was shown by the fact that on nearly every hole the closest-to-pin award went to a golfer who got the approach shot within a few feet of the holes.

There were a number of scores that I considered amazing, but they were nothing like the regular scramble tournaments out there, which is a tribute to the outstanding greens crew and the challenging greens.

“I think the greenskeepers won,” said Rex Smith, who owns Bandon Crossings with his wife and also participated in the tournament.

But Smith said as challenging as they were, most of the pin placements were fair.

The exception, he said, was on the 15th green, which features the steepest slope of any of the greens on the course and had the pin near the top of the slope.

It’s actually the hole that frustrated my teammate Don the most, because we were most of the way down the hill, but he hit a perfect putt that hit the flagstick, spun around it, and came back out of the hole and back down the hill to us.

It hurt to not get a birdie, but we managed par because somehow — we still can’t explain it — my putt that just missed the lip of the cup managed to stop just past it on the hill for a tap-in par.

You have to look pretty far down the list of results to find our team, but we had a blast.

And I tip my cap to the greens crew.

With my curiosity now satisfied about the Greenskeeper’s revenge, I look forward to my next time playing Bandon Crossings in its normal, great conditions.