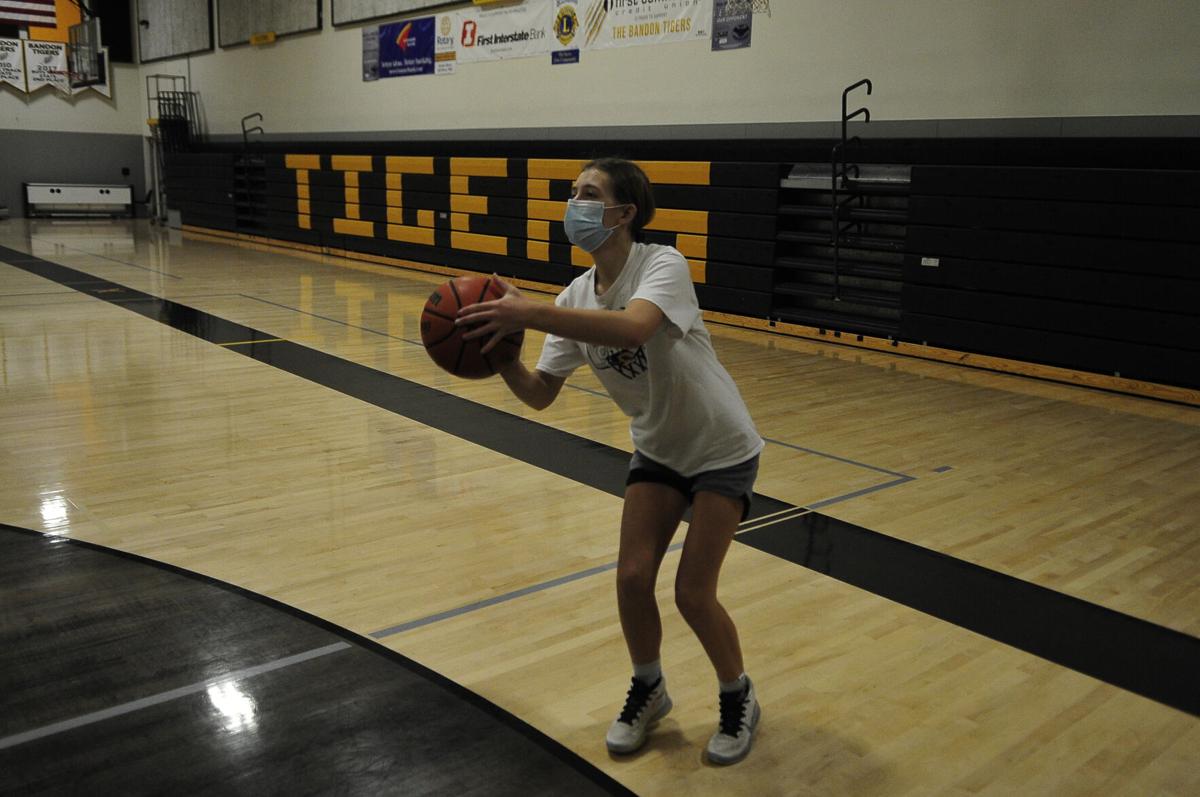 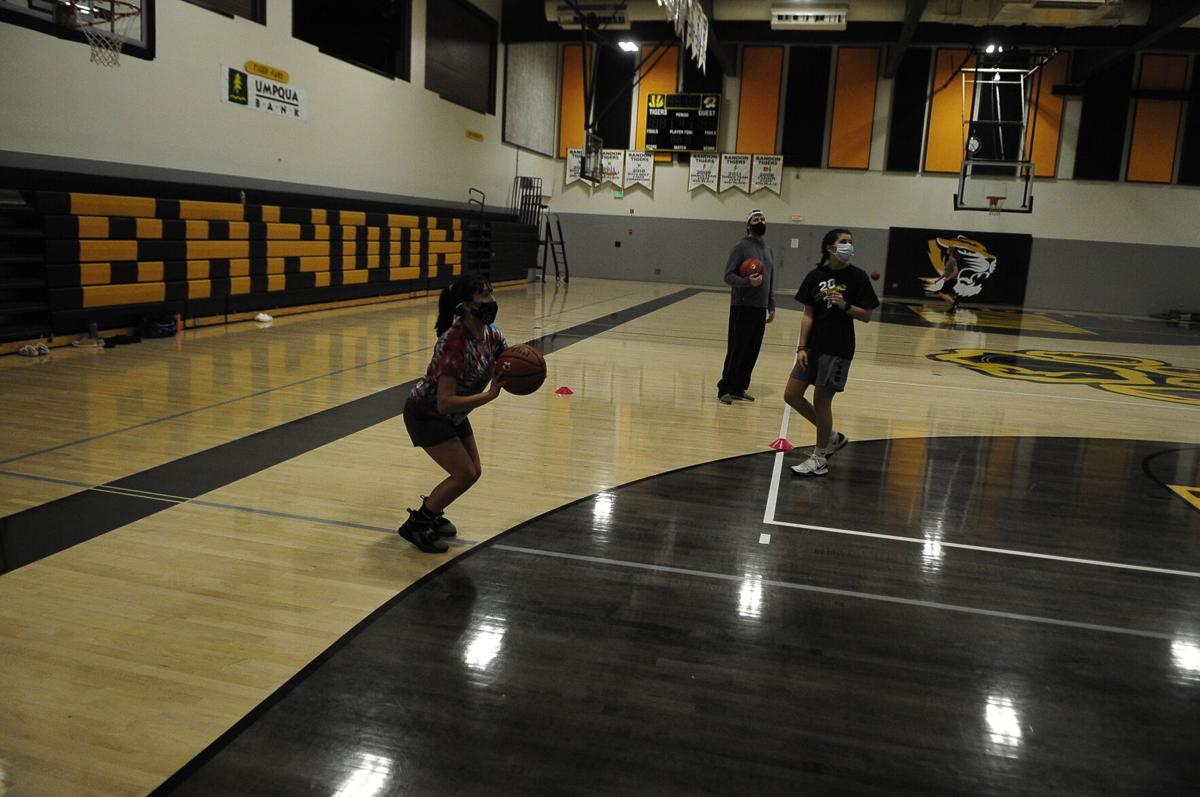 Lizzy Gallagher is one of nine Bandon players who joined the 10,000-shot club during the offseason this year. 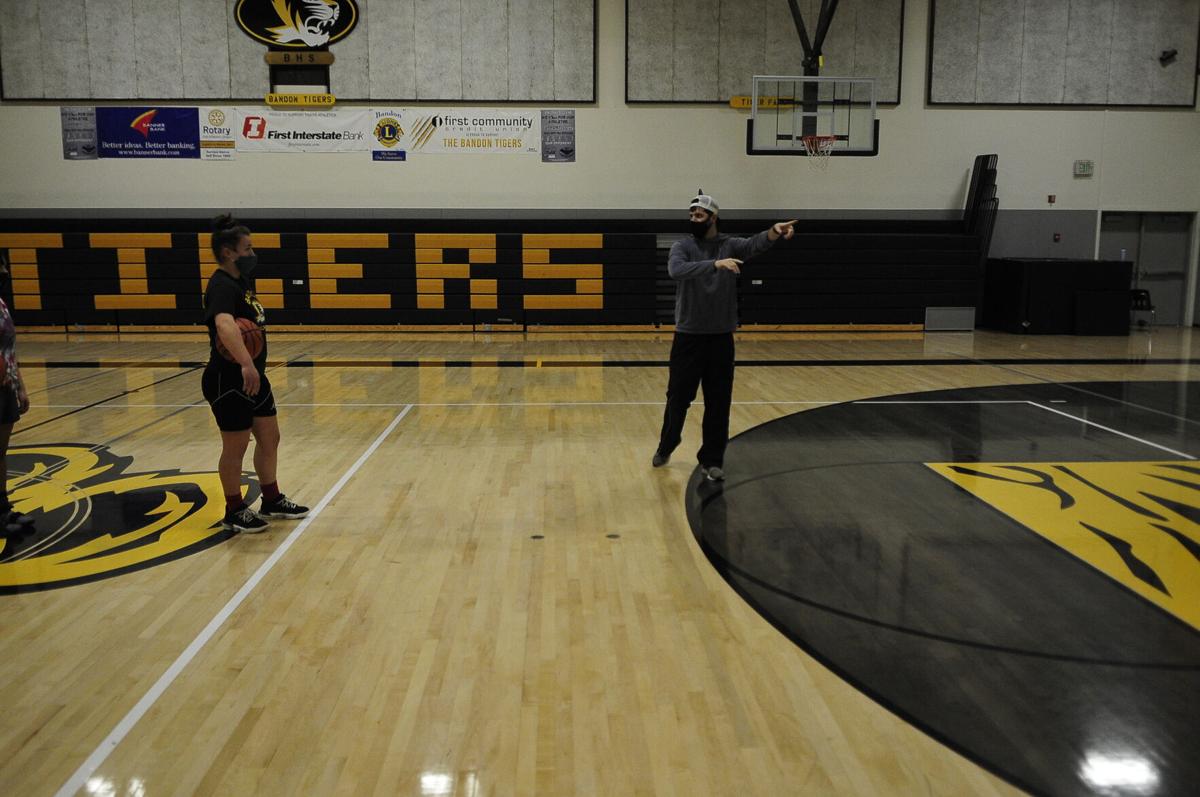 Bandon coach Jordan Sammons instructs a group of players on a drill this week. The players credit Sammons for a lot of their success because of his dedication to helping them improve.

Lizzy Gallagher is one of nine Bandon players who joined the 10,000-shot club during the offseason this year.

Bandon coach Jordan Sammons instructs a group of players on a drill this week. The players credit Sammons for a lot of their success because of his dedication to helping them improve.

BANDON — A year ago, Bandon’s girls basketball team was making a historic run to the Sunset Conference title and an eventual third-place finish in the Class 2A state tournament.

The Tigers would love to be making a similar run now, with intense and fun practices leading to success in games. Instead, Tuesday afternoon saw five players working on drills with coach Jordan Sammons.

It’s not ideal by any means.

But to the players, it’s better than nothing.

“You’ve got to look for the positives — being able to do stuff like this,” said Kennedy Turner, one of three seniors on the squad.

“It helps a lot,” added Sterling Williams, another one of the seniors. “It definitely doesn’t make me as down about missing basketball.”

Under the current plans for the Oregon School Activities Association, the basketball season will be the last sports season of the year, starting in May and running through the end of June.

The five players at Tuesday’s workout — seniors Turner, Williams and Lizzy Gallagher and freshmen Makiah Vierck and Katelyn Senn — all have met a milestone that is one of Sammons’ hallmarks of individual success — the 10,000-shot club.

“You want to set a goal for yourself,” Gallagher said. “The people in it are really dedicated.”

Sammons said nine players, a new team best, reached the club this year, which requires taking 10,000 shots during the offseason.

Williams made it into the club for the second time and said it makes a difference.

Unfortunately for the Tigers, practice time has been limited in recent weeks, as Coos County bounced back and forth from high-risk to extreme-risk for COVID-19.

New rules have allowed the Tigers to get back into the gym in limited numbers even though the county’s number of cases continue to rise. The basketball team and volleyball team are sharing gym time.

Tuesday was the first workout in two weeks, and the players could tell the difference immediately.

“If I’m off a few weeks, I come in and I’m missing layups,” Turner said.

Others have the same experience, but their touch comes back quickly. Sammons said that’s because of all the offseason work.

“Our three seniors and the majority of the freshmen are trying to get in the gym any chance they get,” he said. “And they are getting better. It’s been fun to see.

“We know we’re making lasting progress. The improvements they make are still there (after a few weeks off). It’s fun to see their improvements are consistent.”

For the seniors, seeing the commitment from the younger players is exciting.

“It’s really cool to see a small school, we have over 30 girls coming out and wanting to get better,” Williams said.

Turner knows how far Bandon has come from the four-win season when she was a freshman.

“Bandon has had a hard time building (a winning tradition),” she said. “It’s good to see a handful of freshmen learning what they can from the seniors and taking that feeling so they can be leaders in a year or two.”

The players give much of the credit for the team’s success to Sammons.

“He does a very good job directing us and telling us what we need to do,” Williams said. “He’s very dedicated to helping us get better.”

“If he wasn’t so committed, I wouldn’t be either,” Gallagher said.

After the Tigers’ great finish last year, Gallagher was excited for this season. But not just because of the team’s success.

“Last year was our great year,” she said, explaining that it didn’t matter if the players were on the court or on the bench.

“There was a great support system. It was just a great team.”

She has been looking forward to that team atmosphere again.

For now, the player have hope that there will be a season, which is driving them to keep working hard. Though it’s more joy than work.

“Even if there is no season, we are here because we love hanging out with our teammates,” Gallagher said.

And if there is a season, the Tigers are optimistic.

“I’m definitely excited,” Williams said. “Me and Kennedy have talked about it a lot. We have new girls coming in. We will definitely be pretty good.”

“If we have a season, we want it to be the best season,” he said.

“Everything we have done, it’s bettering the team,” he said. “It’s the ‘we before me’ culture.”