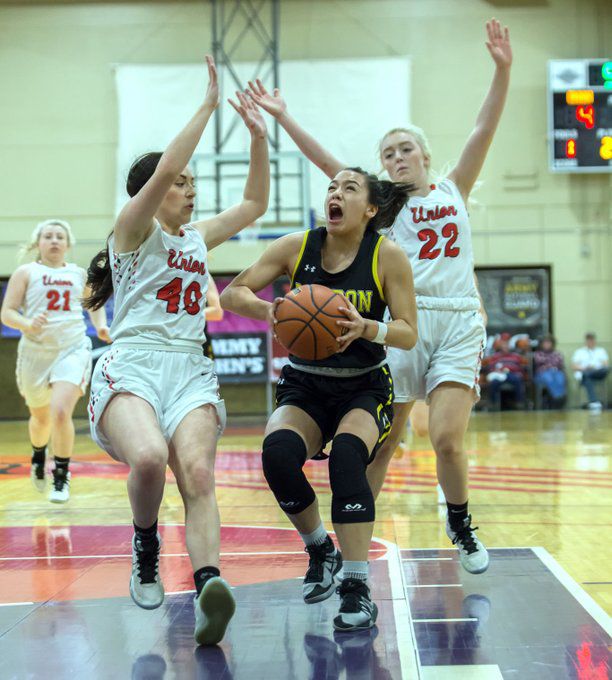 Bandon's Traylyn Arana drives to the hoop against Union in Saturday's third-place game. 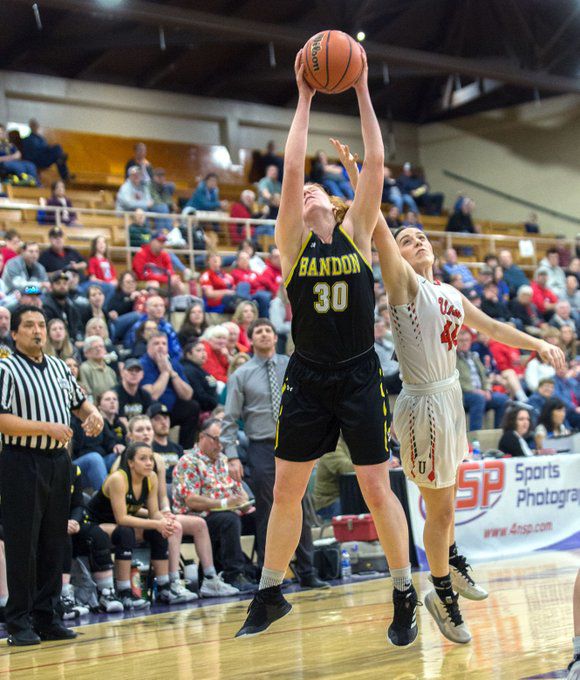 PENDLETON — Bandon’s fantastic girls basketball season ended with the Tigers clutching the third-place trophy at the Class 2A state tournament on Saturday.

The Tigers pounded Union 56-34 in the third-place game. Traylyn Arana, who was picked for the all-tournament first team, finished with 20 points in the game. Sterling Williams, Kennedy Turner and Eduarda Reolon all had nine points and Turner and Reolon also combined for 18 rebounds.

The game capped a magical season for the Tigers, who had a 23-game win streak and won their first league title in years. They matched their best finish in school history — they also finished third in 1990, when the tournament still included 16 schools.

“I’ve never experienced such a great season, and I’m very grateful I got the opportunity to be part of such an amazing, loving team,” said Arana, who transferred to Bandon from Glendale, where she was part of the boys team.

A couple of four-year players who helped build the team up got to celebrate their successful season on the biggest stage.

“For the past couple of years, all of us have been looking forward to this year,” Ashley Strain said. “We all knew that the time in the gym and the workouts from the offseason were going to be all worth it this season.”

The Tigers have built their success the past few years, and saw their efforts really start to pay off last summer.

“It meant a lot seeing everyone buy into our culture and working toward our goal of state,” Strain said. “I don’t even have the words to describe us achieving our goals of being undefeated in league, being relentless and making it to state

“I have to say that none of our goals could have been accomplished without every one of these girls that have worked so hard.”

Bandon’s only loss before the state tournament came to Brookings-Harbor, which finished fifth at the Class 3A tournament on Saturday. They also lost to eventual champion Kennedy in the semifinals.

But that didn’t take away from the great season.

“It’s hard to find the words to express the feelings and emotions that come with this season and this weekend,” Bandon coach Jordan Sammons said. “It’s just a surreal moment because I know the sacrifices, tears, dedication and countless hours these girls put in to make this happen.

“They’ve gone above and beyond everything I’ve ever asked of them, and for them to finish third just has me at a loss for words.”

But what really has impressed Sammons is the bonds the teammates have formed.

“If you talk to the girls, what they are most proud of is the way they became a family and the culture and foundation they have built for our program, especially this group of seniors,” he said. “They just get it.

“They know that wins and losses don’t matter nearly as much as the relationships you build and form. Understanding that it’s bigger than me and playing for, building with, and loving the teammates that are next to me. Listening to the way they talk about our culture and how much they really love and care about each other means way more to me than the success we have had on the court this year,”

But that, in turn, has helped the team.

“I know 100 percent the success on the court has been a direct correlation to the relationships we have as a team,” Sammons said.

While the Tigers graduate several key seniors, the team has high hopes for the future.

“I have seen the underclassmen grow into leaders, and I know they will carry on our culture after us seniors are gone,” said Naomi Martin. “I am beyond blessed to have finished this season knowing we gave it our all.”

“I know our culture and foundation has been built deep into our program,” he said. “I’m excited for the girls I have returning next year, both as players and leaders, and I know our program is in great hands.”