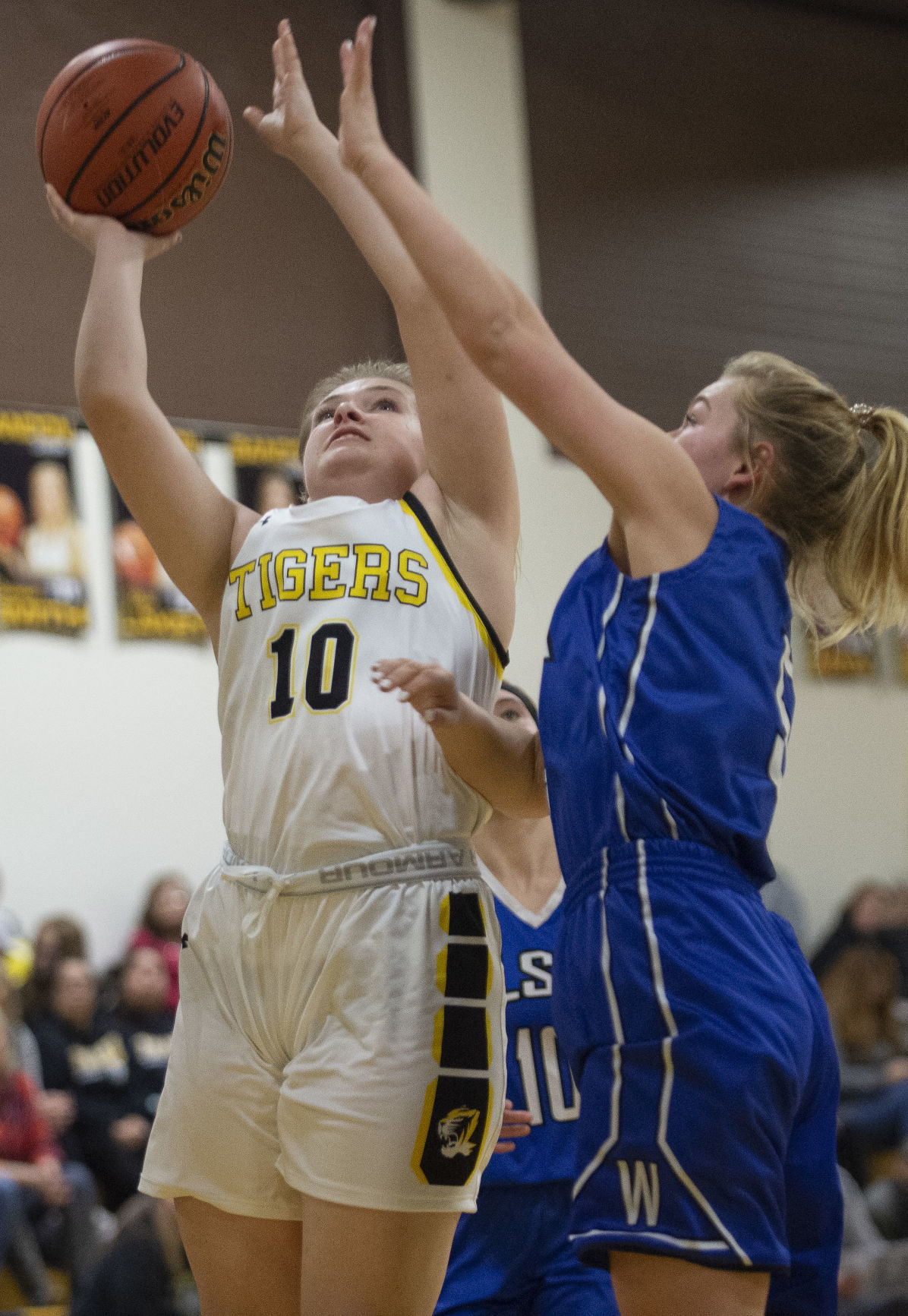 Bandon's Carlee Freitag puts up a shot Friday against Alsea's Liberty Ulm during the first night of the Bandon Dunes Holiday Invitational at Bandon High School. 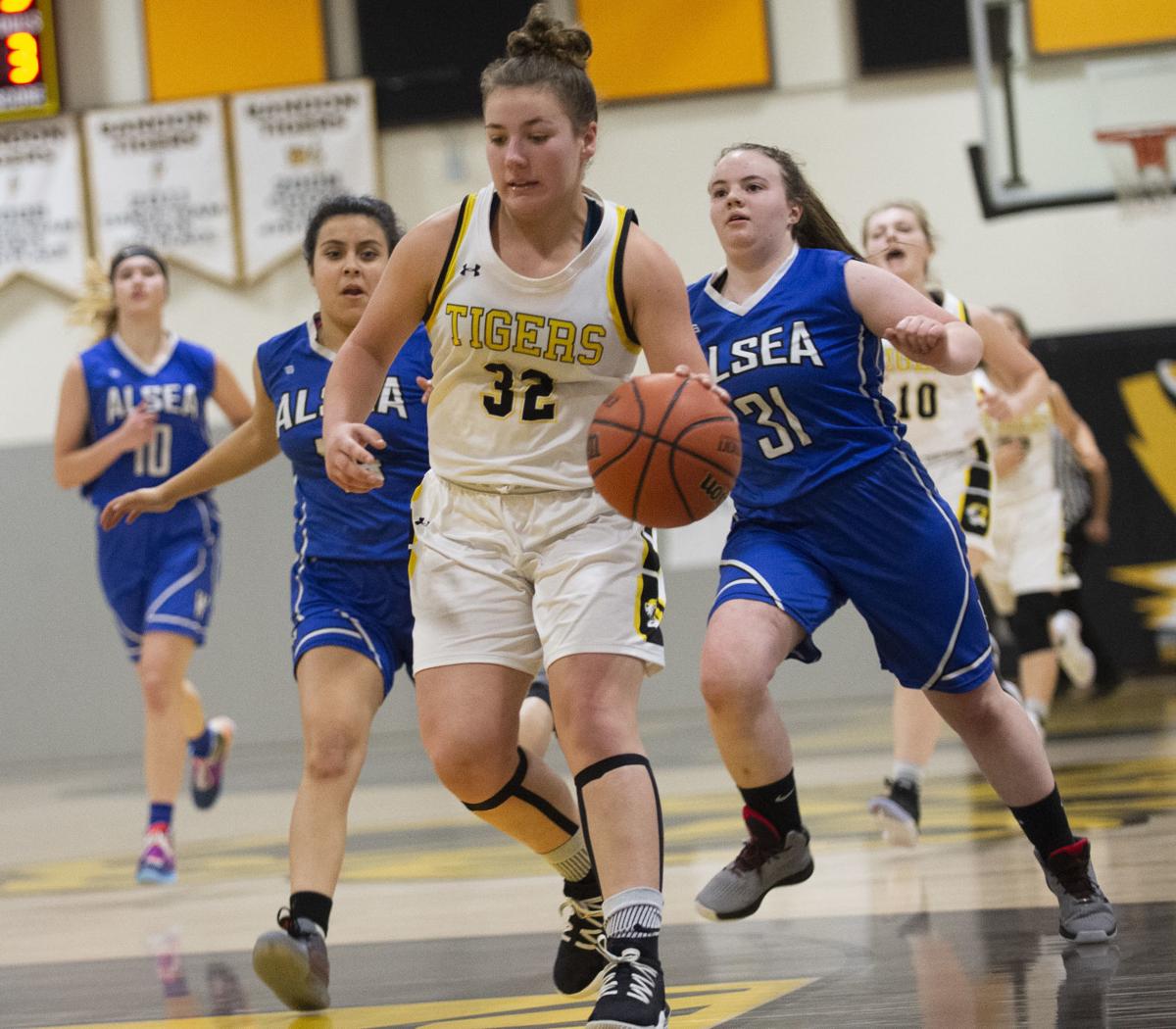 Bandon's Sterling Williams drives the ball Friday against Alsea during the first night of the Bandon Dunes Holiday Invitational at Bandon High School. 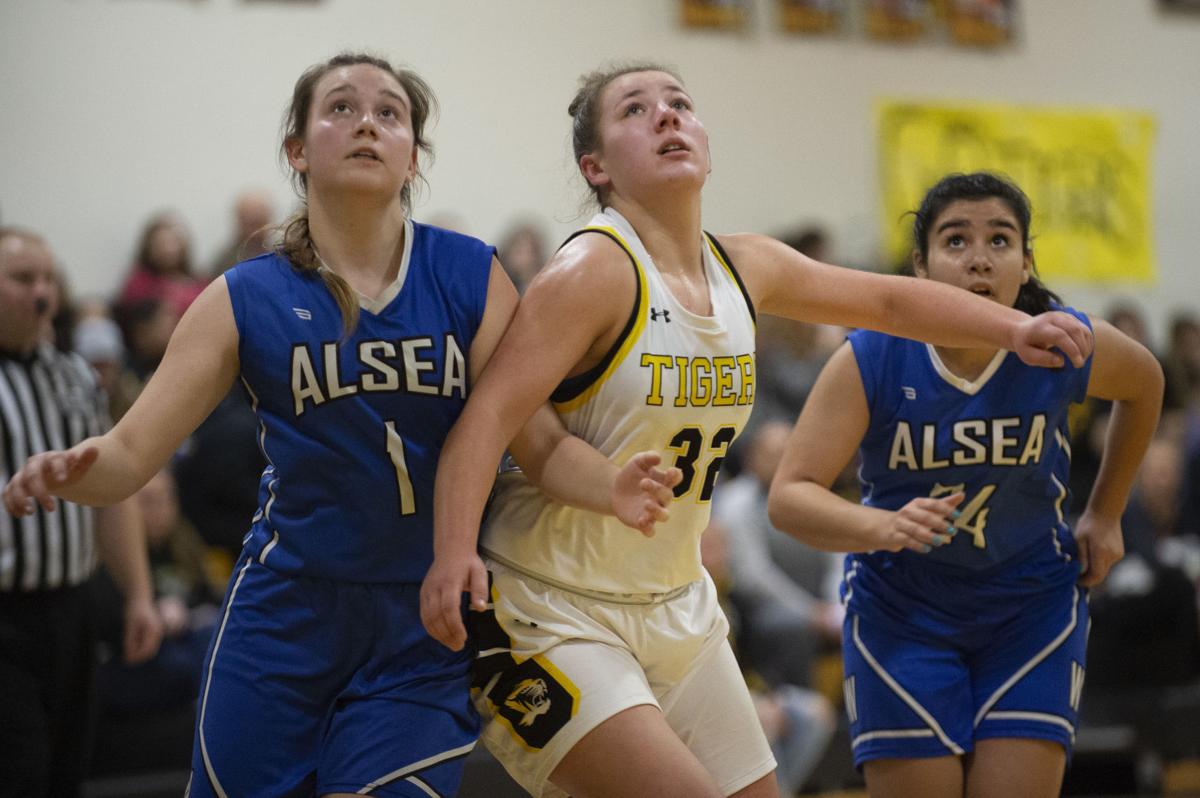 BANDON — It didn’t take long for Traylyn Arana to take over the game.

After one minute of play the Bandon guard had recorded six points, two steals and, for good measure, an assist. It was all part of the Tigers dominant 77-27 win over Alsea at home on Friday night in the Bandon Dunes Holiday Invitational.

“I think what helped a lot was what that coach (Jordan Sammons) said before the game. He said, ‘Just have fun.’ Usually we have goals on the board but we didn’t have it today. He said, just have fun,” said Arana, who finished the first quarter with a staggering stat line of 16 points, four steals, three assists and two rebounds. “And it was fun.”

Arana finished the game with 27 points to go along with seven assists, six steals and three boards.

“Go out with that intensity and play how you play.”

The Tigers, now off to a 10-1 start on the season, made quick work of the Wolverines on the way to 20-0 lead in under five minutes of play. As a team Bandon shot 15-of-18 from the field in the first quarter.

Scoring at will, Bandon passed up open shots for wide open shots as they were in complete control of the game. For Sammons, the focus of the game was about execution.

“In a game like that, we want to be relentless in our execution. We want to make sure we’re executing what we run, we want to play our game,” he said. “Our seniors picked four words that we want to define our season off the court and on the court: grateful, relentless, accountable, hype ... Our focus kind of turns to those four words.”

Bandon seemed to check off all the boxes as they just continued to roll. While the scoring started with Arana, Sterling Williams and Ashley Strain also both finished in double figures recording 12 and 10 respectively.

Buoyed by Alsea turnovers — the Wolverines coughed the ball up 23 times in the game — Bandon put together a 24-3 run to push its lead to 50-10 at the half. Giving the starting group a limited run throughout the second half, the final two quarters became an excursive in trying new lineups for Sammons.

“It was cool just to see next year’s team. And they played well. They played good together and having next year’s team out there is cool to see and build the support of our team,” said Sammons. “We love when we get to reward those kids with playing time.”

Bandon will now face Siuslaw on Saturday night at 7 p.m. in the Bandon Dunes Holiday Invitational championship game for the Black Bracket. The Vikings beat East Linn Christian 37-26 for their first win of the season.

The Tigers warmed up for the tournament with a 44-22 win over Bonanza on Thursday.

Arana had 16 and Strain 12 as Bandon kept the Antlers from scoring in the first period while building a 21-4 halftime lead.

Jada Gallagher and Navaeh Nelson had six each for Bonanza.

In a 10-minute span of game time stretching from the second quarter into the third quarter, the Bandon boys scored 36 straight points. At the end of this particular scoring run — which more closely resembled a lay-up drill than an organized game of basketball — the Tigers had established a lead.