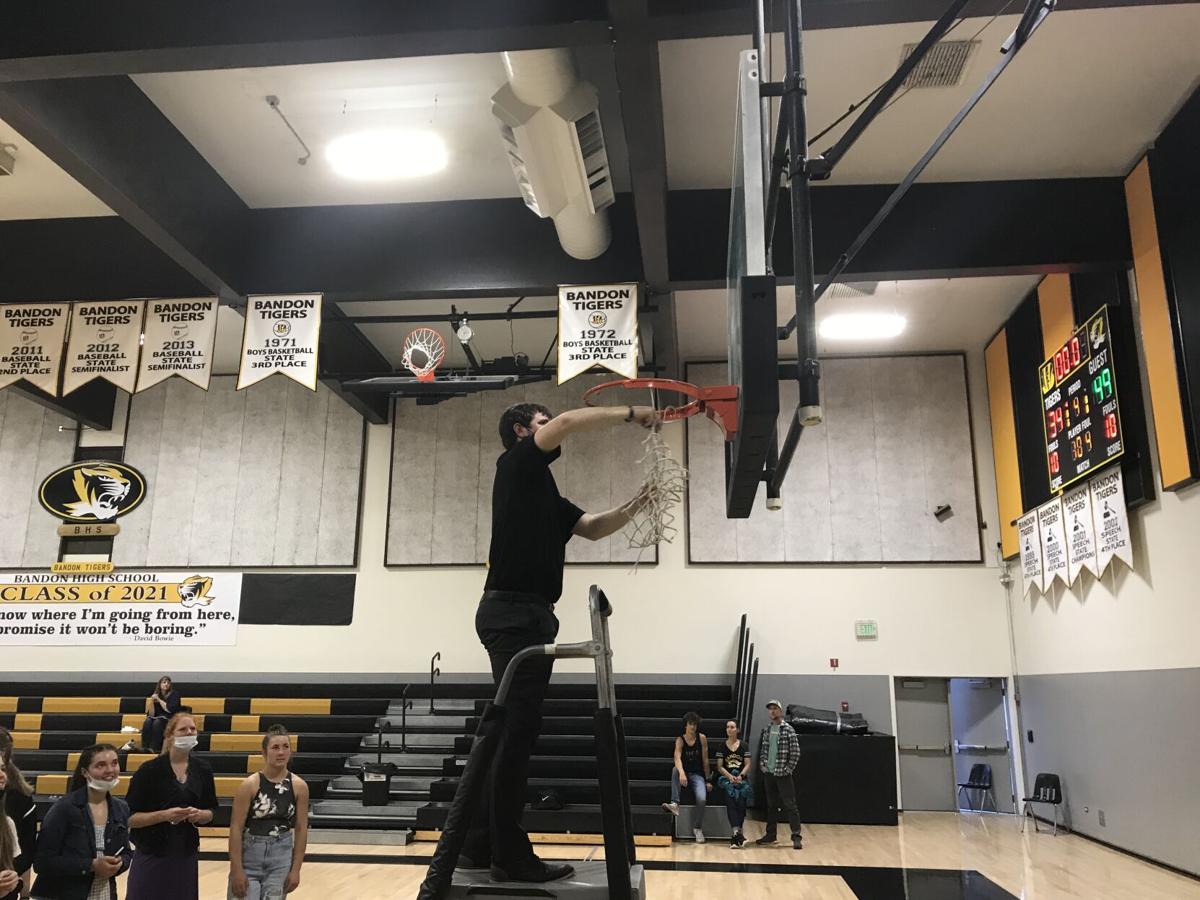 Bandon girls basketball coach Jordan Sammons cuts down the net following the Tigers’ victory over Regis in the Class 2A playoffs Tuesday. Bandon repeated as Sunset Conference champion and is in the final eight. 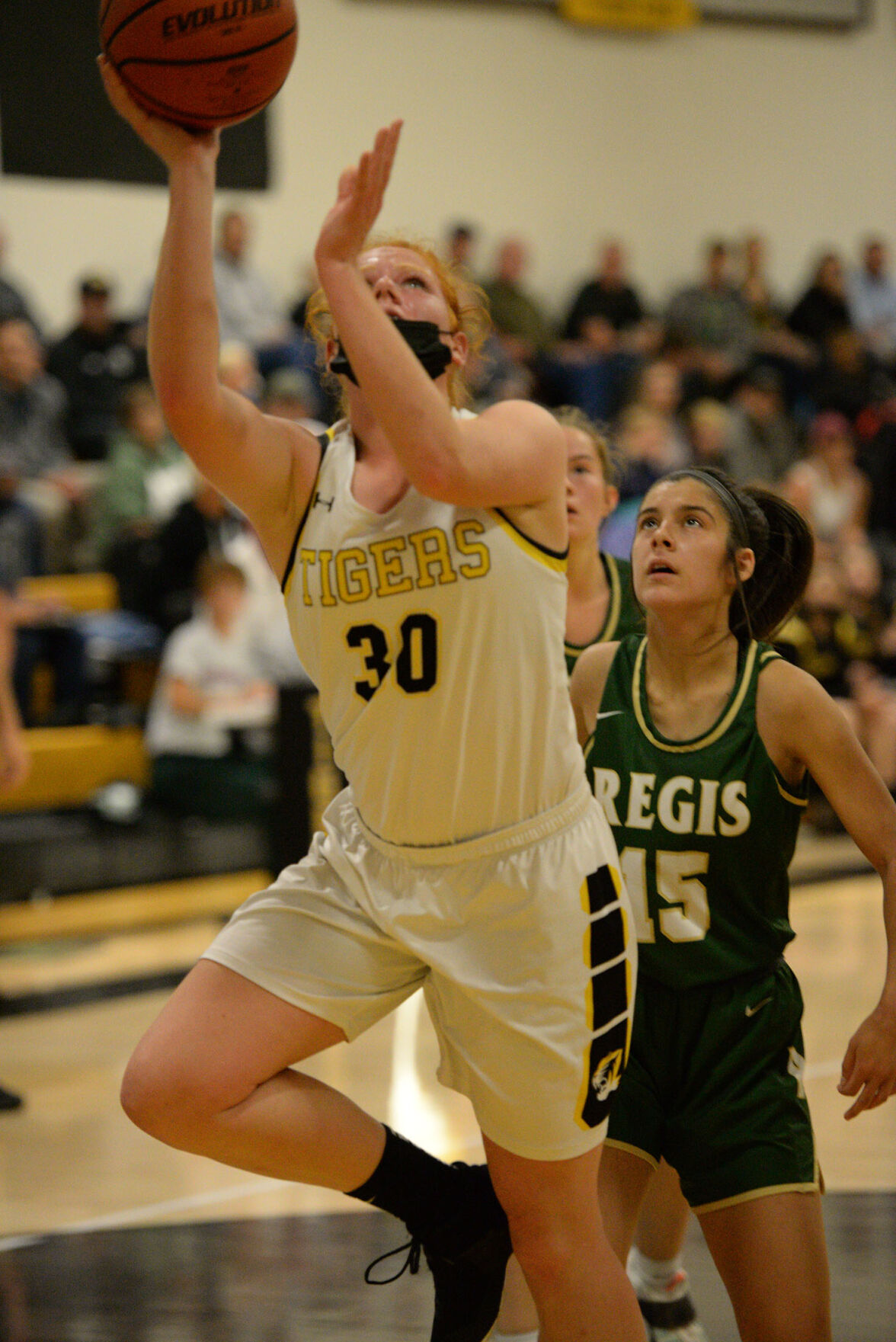 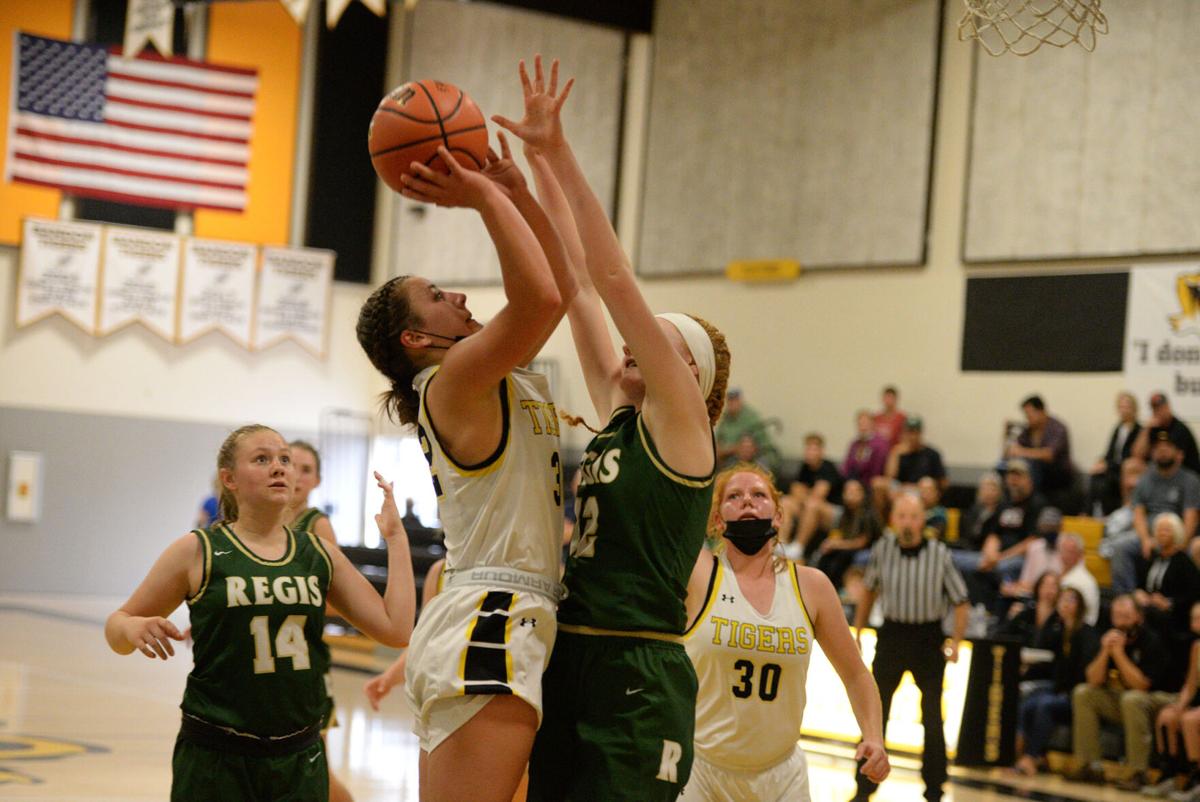 Bandon girls basketball coach Jordan Sammons cuts down the net following the Tigers’ victory over Regis in the Class 2A playoffs Tuesday. Bandon repeated as Sunset Conference champion and is in the final eight.

BANDON — For the second straight year, Bandon’s girls basketball team is in the Class 2A final eight.

The Tigers built a big lead on visiting Regis on Tuesday and then held on as the Rams furiously fought back in the fourth quarter, ultimately winning 41-36.

“I’m so excited,” said Bandon senior Sterling Williams. “It’s been our No. 1 goal. We’ve been prepping for it.”

The Tigers, who repeated as Sunset Conference champions and have not lost this season, faced a quick turnaround before a game against defending state champion Kennedy at Monroe High School on Wednesday to determine whether they would be in the semifinals or the consolation bracket when the eight remaining teams gather at Redmond this weekend.

Bandon earned that chance with a young team that relies on three freshmen for extended minutes, unlike last year’s veteran squad that placed third in the state tournament. But the Tigers have the same work ethic, which has made a huge difference in the pandemic-impacted season that came at the end of the school year instead of the normal winter time frame.

“The work that we put on in the offseason really paid off,” said Olivia Thompson, one of the freshmen.

The team’s composure also paid off, especially when the contest got tense in the closing moments.

Both teams struggled to shoot the ball early, with the exception of Bandon senior Kennedy Turner.

She repeatedly got free inside during the first half while making all her shots from the field and scoring 16 of her 20 points.

“These guys had awesome passes,” Turner said of her teammates. “It was a team effort.”

But the Tigers started hitting in the second half. Freshman Katelyn Senn had a pair of 3-pointers, the second at the end of the third quarter giving Bandon a 34-18 lead.

Bandon stretched that advantage to 18 points in the final quarter before Regis started hitting, in particular Sara Wiltsey. The senior hit three 3-pointers as part of a 15-0 run by the Rams that pulled Regis within two points with just under 90 seconds to go.

That’s when Turner missed her only attempt of the game, but she came back on the other end with a huge block that preserved Bandon’s lead, and Thompson, who didn’t make a field goal all game, hit three free throws to give the Tigers the cushion they needed for the victory.

“Sometimes we struggle with our shots,” Thompson said. “When I couldn’t make shots, I had to keep my composure together and make them at the line.”

Senn had eight points for Bandon, while Thompson hit six free throws (she also had three in the first half) and Williams scored five points. But for all their struggles from the floor — they were a combined 5-for-28 — the trio also had 10 assists, most to Turner.

They also combined with Carlee Freitag and Makiah Vierck, as well as Angie Morones who had a key stretch off the bench, to stymie Regis much of the night.

“We kept calm and collected and stuck with our defense,” Williams said.

“Everybody was in on it,” added Thompson. “It was a team effort.”

Whitley Stepp led the Rams with 12 points, while Wilstey and Ava Silbernagel added 11 each. Silbernagel also had 14 rebounds, but shot just 4-for-20 inside against the Tigers’ interior defense.

Significantly, Bandon didn’t panic when Regis made its big run.

“They are going to go on runs,” Williams said. “They’re a great basketball team. We just kept calm and didn’t let it rattle us.”

“We grew up a little bit tonight,” he said. “Regis is a solid club. It was a learning moment. We haven’t been pushed like that, for sure.

“They made the run, but I’m glad with how they responded.”

He credited his two seniors with keeping the team together and calm.

“The leadership of Sterling and Kennedy made the difference for us,” Sammons said. “I’m so proud of these girls, but especially for my two seniors.”

Now the Tigers face Kennedy, the only Class 2A team to beat them last season (in the state semifinals). The Trojans tied for second in the Tri-River conference and are 8-3 overall after beating Union 61-43 in their first-round game Monday.

Aside from Bandon, the only unbeaten team is Gervais, the Tri-River champion, which beat Gold Beach 62-13 in its first-round game Monday.