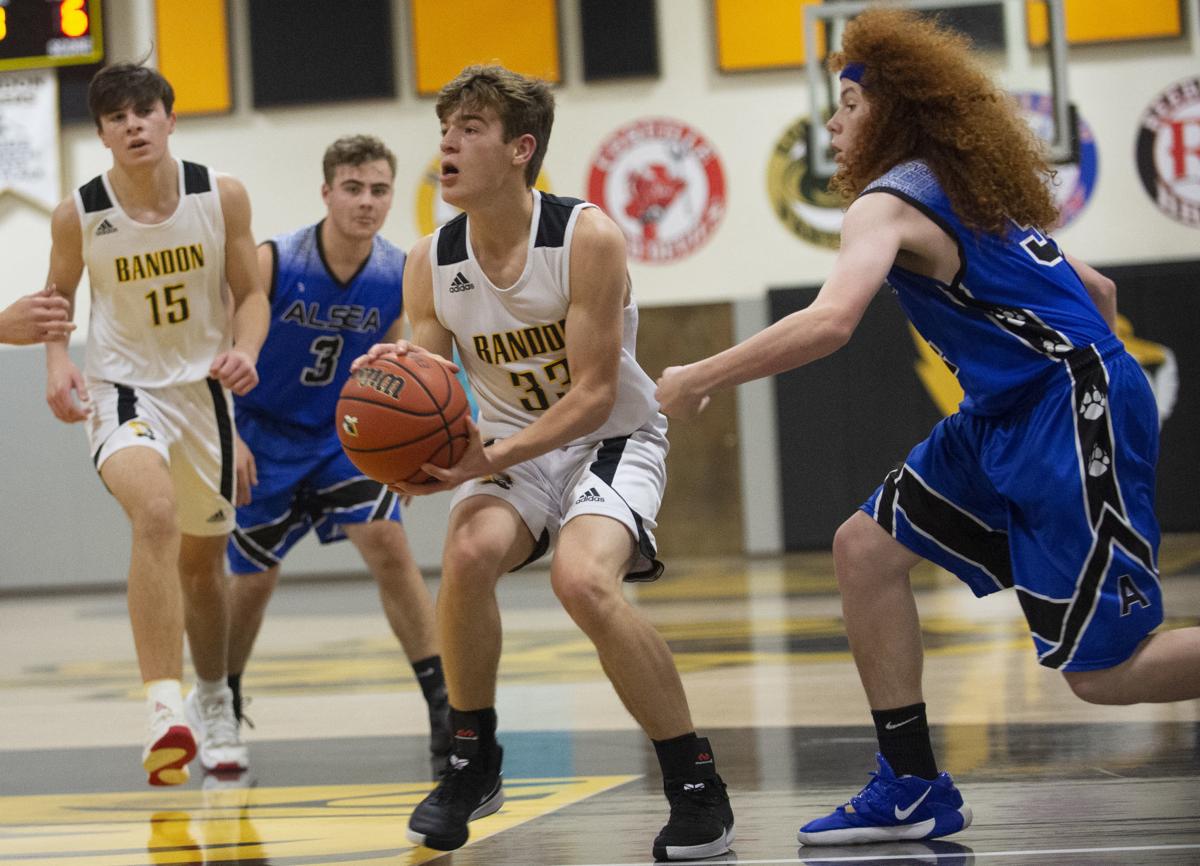 Bandon's Trevor Angove looks to the net on a drive against Alsea during the first night of the Bandon Dunes Holiday Invitational at Bandon High School. 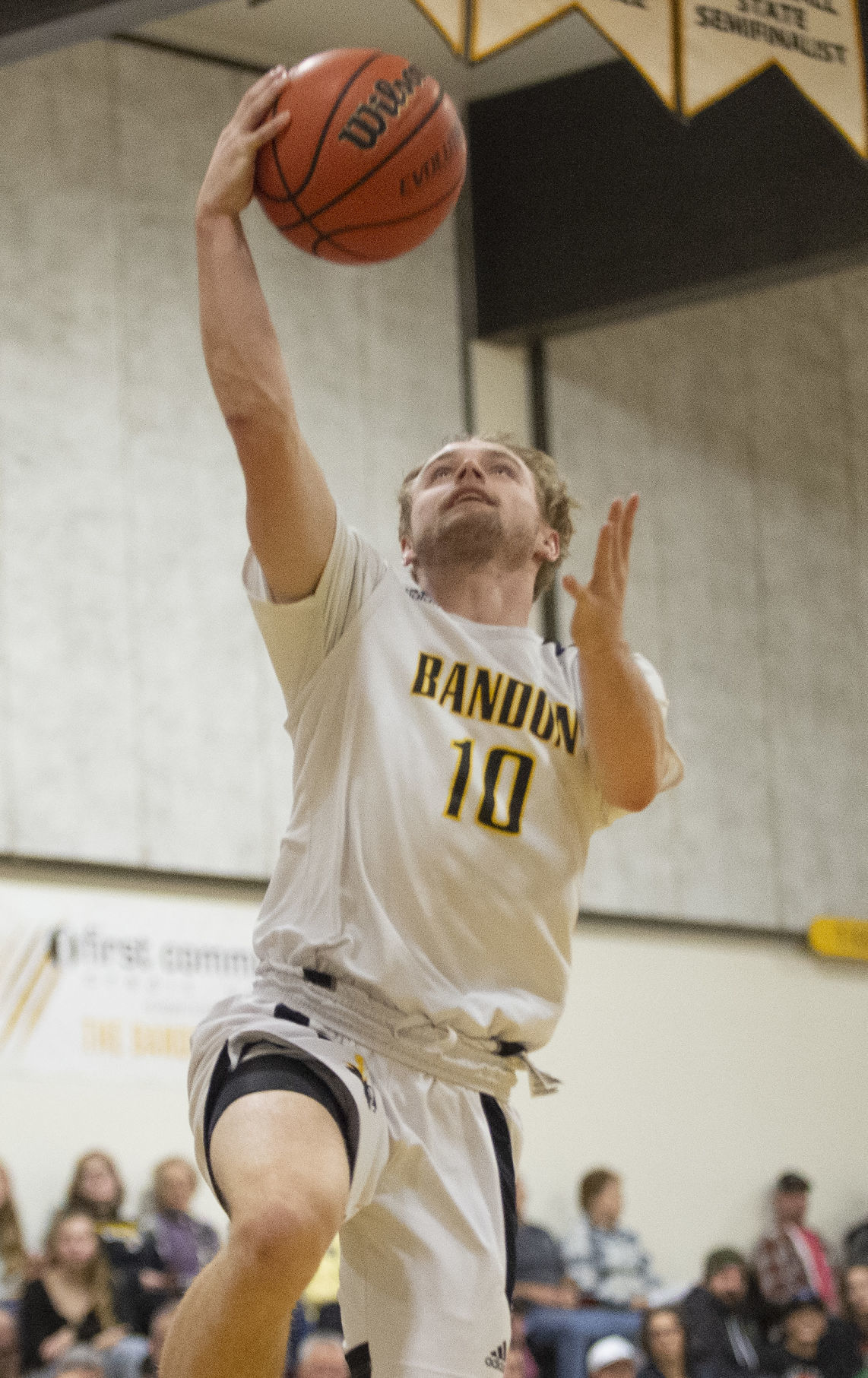 Bandon's Braydon Freitag drives for a lay up Friday against Alsea during the first night of the Bandon Dunes Holiday Invitational at Bandon High School. 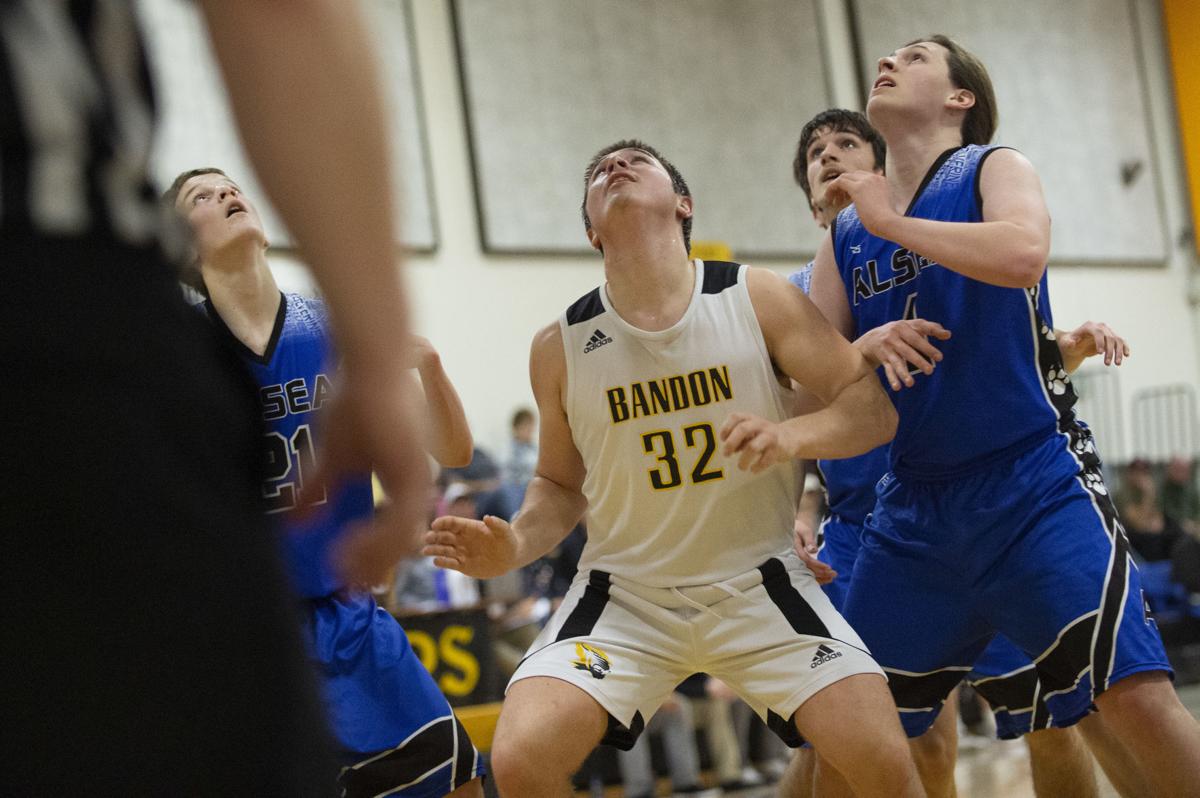 BANDON — In a 10-minute span of game time stretching from the second quarter into the third quarter, the Bandon boys scored 36 straight points. At the end of this particular scoring run — which more closely resembled a lay-up drill than an organized game of basketball — the Tigers had established a 68-9 lead.

Facing Alsea in the Bandon Dunes Holiday Invitational, it was the Tigers eventually taking a 91-17 victory over the Wolverines on Friday night.

“Before the game, I was like, we can’t take them for granted ... We can underestimate the team based on their record,” said Bandon’s Coby Smith of the 0-4 Alsea squad. “But we played our game and kept our composure.”

Constantly open in the low post, Smith pounced early recording 10 points in the first quarter on the way to a game-high 19 points. Smith was one of four Bandon players to score in double figures. Joining him were Cooper Lang with 16, Sean White with 13 and Trevor Angove with 13.

A 23-5 lead after one quarter turned into a 47-7 Bandon advantage at the half. The Tigers were making the most of Alsea’s 15 first-half turnovers. The Wolverines finished with 26 in the game while the Tigers had four.

“In a game like that, just keeping their focus in the game. Just work on things we work on in practice and get an opportunity to do it in a game. Making sure you’re executing the offense still, make sure that you’re rebounding, make sure you don’t get lazy on the defensive end,” said Bandon head coach Vince Quattrocchi.

“On the offensive end, don’t look for those quick one pass and shot, run through our stuff. Be patient, work on our offense and then on the defensive end be active as all heck. Keep your hands up, box out, rebound, continue to push the ball. Don’t take it easy until we say to take it easy.”

While Bandon’s offense was not out-of-this-world-efficient on the night, what was staggering was the volume of shots. The Tigers had 72 shots in the game (making 37 of them) while Alsea had 39 shots total and made six field goals on the night.

Ten different Bandon players scored on the night as the bench was emptied allowing more minutes for the group of non-starters. During that stretch, Quattrocchi was looking to see what his team might look like in the future.

“You have an opportunity in a game like that be able to plug your kids in there and see what it looks like. And then be able to run things that you don’t normally run in a game,” he said. “Just to see how they do it as a team.”

Alsea’s Dillon Elbers had a team-high five points for the Wolverines.

Bandon will now face East Linn Christian Academy on Saturday night at 8:30 p.m. at Bandon High School in the championship game for the Black Bracket. The Eagles topped Siuslaw 58-48.

“So the focus is definitely finish strong with our preseason,” said Quattrocchi. “Win the Bandon Dunes Invitational. That’s our goal.”

The Tigers open the Sunset Conference season at home against Waldport on Tuesday.

On Thursday, the Tigers had a strong second half to beat host Days Creek 49-38, pulling away from a 20-20 halftime tie and limiting the Wolves to three points in the fourth period.

“Days Creek is a tough place to play,” Quattrocchi said. “They are well-coached and scrappy. The boys played through it and finished the game well.”

Smith had 15 points in the win and Freitag, Trevor Angove, Cooper Lang and Sean White added eight each.

It didn’t take long for Traylyn Arana to take over the game. After one minute of play the Bandon guard had recorded six points, two steals and, for good measure, an assist. It was all part of the Tigers dominant win over Alsea at home on Friday night in the Bandon Dunes Holiday Invitational.