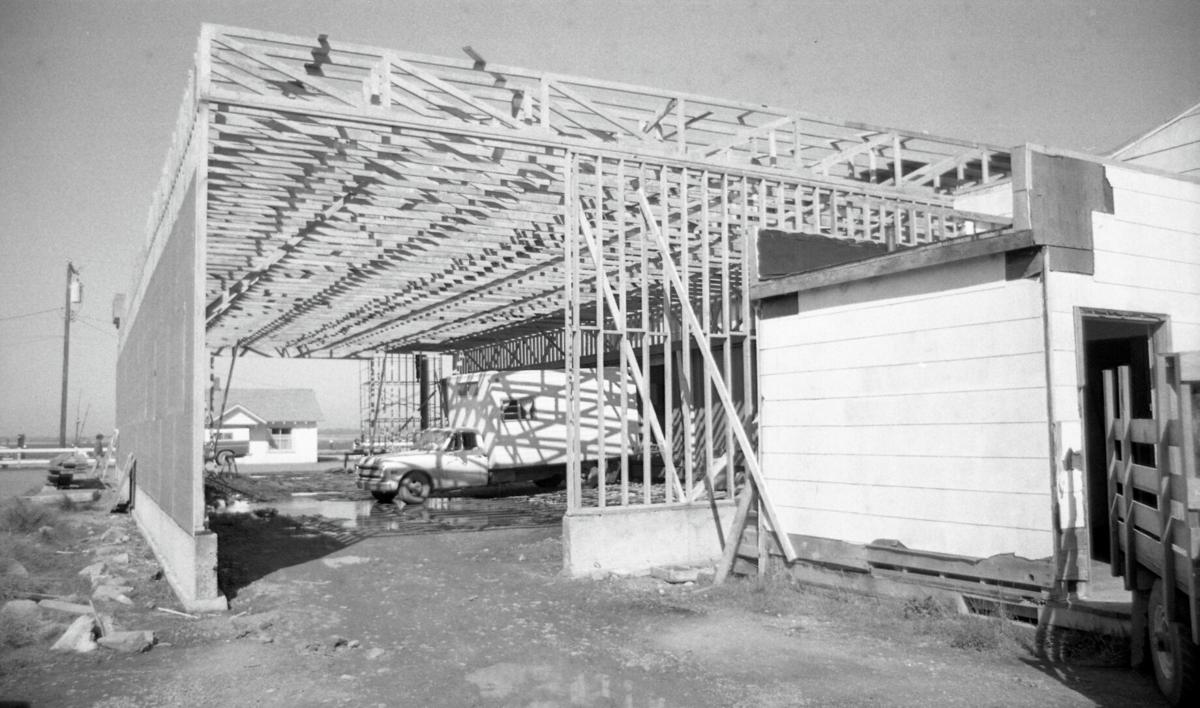 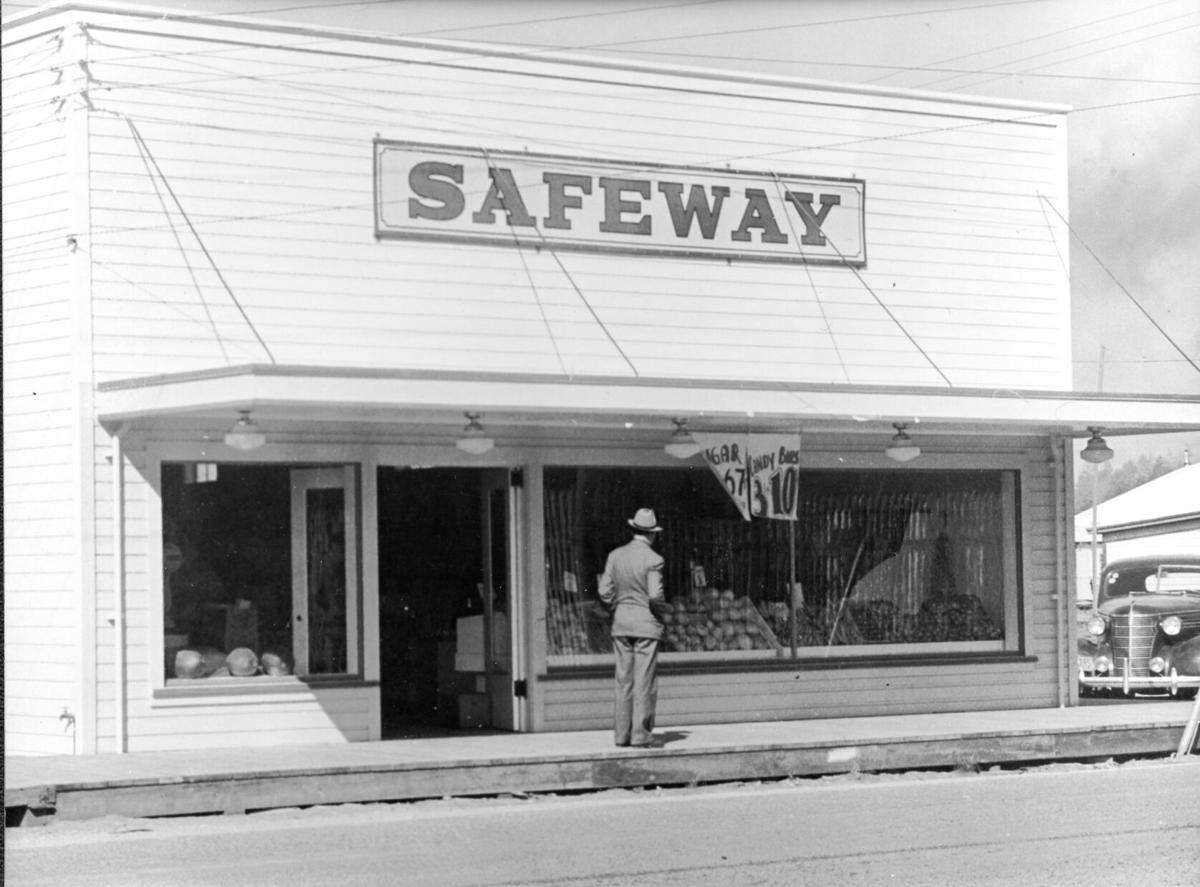 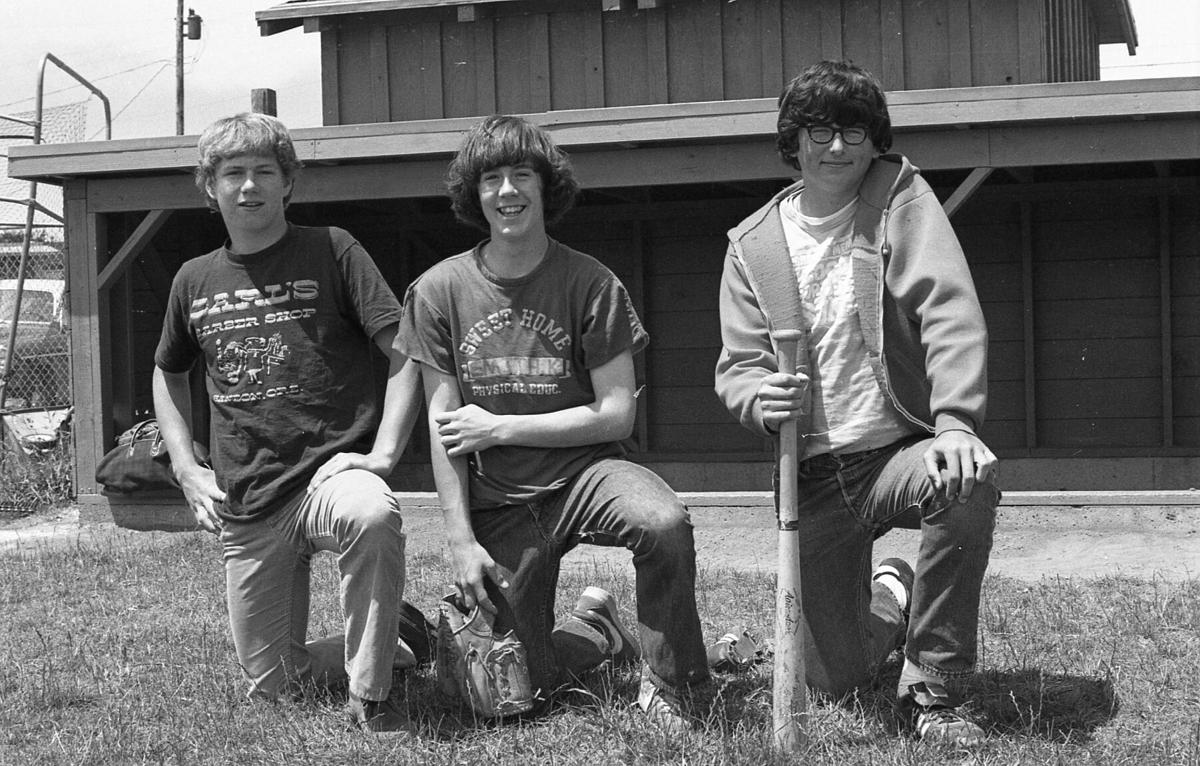 The first picture I am sharing is an addition to the Big Wheel, built in March of 1979, to house hay and fertilizer. A caption in that week's Western World explains that "a 3200 square foot addition to Big Wheel is presently under construction and the owners, Charles and Lillian Hettich, expect it be completed in about a week. The 40 x 80 addition will provide a covered loading area for their customers as well as extra storage for hay and fertilizer. Stadelman Enterprises Inc. is the general contractor for the project."

The original building, which still stands on the corner of Baltimore and First, was constructed not long after the Fire of 1936 by Ernie Panter, and was known as the Panter Feed Store until 1973 when then owners, Sterling and Norma Welch and their daughter and son-in-law, Rick and Rosalie Smith, held a store-naming contest. The winner came up with the name Big Wheel and the wheel logo, and for nearly 50 years, the name has stood the test of time.

In the background you can see the Port of Bandon office, which today is part of Tony's Crab Shack.

The second picture shows the new Safeway building, not long after it opened.

It was announced in the July 20, 1939, Western World that construction of a new store building for Safeway would be started within a few days.

"A ground lease has been taken on land owned by Mrs. E.A. Hartman of Estacada at the corner of Delaware Avenue and Second Street (Highway 101), which is the corner east of the New Bandon Theatre. The lot was recently vacated by the removal of the Electric Shoe Rebuilders shop and the Legion Hall.

"A contract is to be let to a Bandon contractor, the item says, for a frame building 35 feet wide and 80 feet deep. Safeway operated a store in Bandon before the fire of 1936, and after the fire until their ground lease ran out about three months ago."

Today it is the site of Bandon Brewing Co. and Bandon Vision Center.

The third picture was taken in the summer of 1973, although I could not find the article in the paper. The negative envelope says "Babe Ruth" on it, and I know that the three baseball players are, from left, Googer Kiefer, David Borgard and Scott Vierck.

I did find a number of articles about the Babe Ruth A team, of which Kiefer and Vierck were members, but it never mentioned Borgard, so I am not sure if he planned to play, and didn't, or what the story is, but I certainly know it's him.

On the same page in 1939 that contained the Safeway article, I found an interesting headline that read "City Has Oil Project."

"A combination of fortunate circumstances has made it possible for the City of Bandon to put at least one street oiling project into effect, supplementing a project just completed by Coos County on the Bandon Beach road.

"The county oiled from the city limits at Queen Anne south to Windermere, covering a section of the road that is receiving much travel. This left an unsurfaced section between the end of the pavement on First Street at the Coast Guard station and the pavement on Fourth St. and Ocean Drive and from Jackson Avenue on Ocean Drive to Queen Anne.

"Through the efforts of Mayor K.I. Franklin, Public Utility Manager J.H. Fasnacht and others the city obtained use of the county equipment and crew for oiling the unsurfaced area.

"The oil is heated with steam from the local creamery. The actual oiling cost is about $30 a day."

This has been a fairly dry summer, with less than two inches of rain having fallen since June 1 (1.53 inches in June, 0.04 in July and 0.40 in August), and the fact that we are headed for a heat wave certainly could increase the fire danger.

The weather forecast for Labor Day (Monday) was a temperature of 64 degrees, followed by 82 on both Tuesday and Wednesday.

Over the weekend, as an historic heat wave broiled Southern California, Woodland Hills in Los Angeles County recorded an all-time high of 121 degrees, which the National Weather Service said was the hottest temperature recorded at an official weather station in LA County. And state power officials warned rolling blackouts were possible ....."

We are so fortunate to be living where we do, with the cool ocean breezes never that far away, even on those days when warmer temperatures are forecast.

Although I did not know the young man, Alexander Lee Jones, 26, who died last week, his mother was Kelley Erdman, daughter of Ferne and Melvin Erdman, who graduated from Bandon High School in 1981 and was Cranberry Queen in 1980. She and her husband, Rick Jones, live in the Coos Bay area. The obituary they wrote for their son, Alex, brought tears to my eyes, as it was such a touching tribute to the young man, who had suffered from mental health battles for years and ended up taking his own life in spite of numerous efforts by his family to provide mental health counseling for him. They described Alex as having lived life to the fullest.

As most of you know by now, there will be no traditional Cranberry Festival this year, but the Chamber has scheduled a number of virtual events, as well as encouraging businesses to decorate in all forms of cranberry as part of the "Paint the Town Cranberry" business decorating contest. Businesses need to call or email the Chamber to let them know you want to be judged.

The Cranberry Court consists of BHS seniors Hannah Bristow, Kayla LaPlante and Elli Schulz. The judging of the court's talent and platforms will be a closed event but videotaped for all to enjoy, as will the Queen's coronation, according to the Chamber.

This weekend, Sept. 12 and 13, there will be free admission to the Bandon Historical Society museum, sponsored by Doug and Sharon Ward Moy. Sharon was the Cranberry Queen in 1965. The museum will present a virtual Cranberry's Past celebration on their Facebook page.

The hospital and the foundation will hold a Cranberry Harvest Celebration Beach Walk Saturday, Sept. 12, beginning at 10 a.m. The starting point for the walk is at the South Jetty entrance to the beach, and will end at Coquille Point. The hospital will provide masks for anyone who would like one, along with hand sanitizer, bags and education about COVID-19 and other healthcare topics of interest. Participants are free to walk alone, with their families and with their dogs. Donations will be accepted at the hospital table positioned at the start of the beach walk. All donations will go toward the hospital's commitment to COVID preparations.

For complete details about what is planned visit www.bandon.com/events or contact the Chamber office at 541-347-9616.

City of Bandon voters received their ballots in the mail last week for the water and sewer rate increases, which will be $8 a month for water and $7 a month for sewer, on the base rate.

I urge voters to support Measures 6-179 and 6-180. The city cannot continue to subsidize the water and sewer funds out of the general fund, 40 percent of which goes to fund the police department.

If you haven't already done so, please read the Q&A that came with your utility bill this month; it may answer a lot of your questions.

There has been what seems to be an epidemic of fatal motorcycle crashes in Oregon in the last couple of months, with 12 or 13 deaths involving both riders and their passengers. This weekend, three people died in motorcycle wrecks, including two in Douglas County. And the average age is probably about 50.