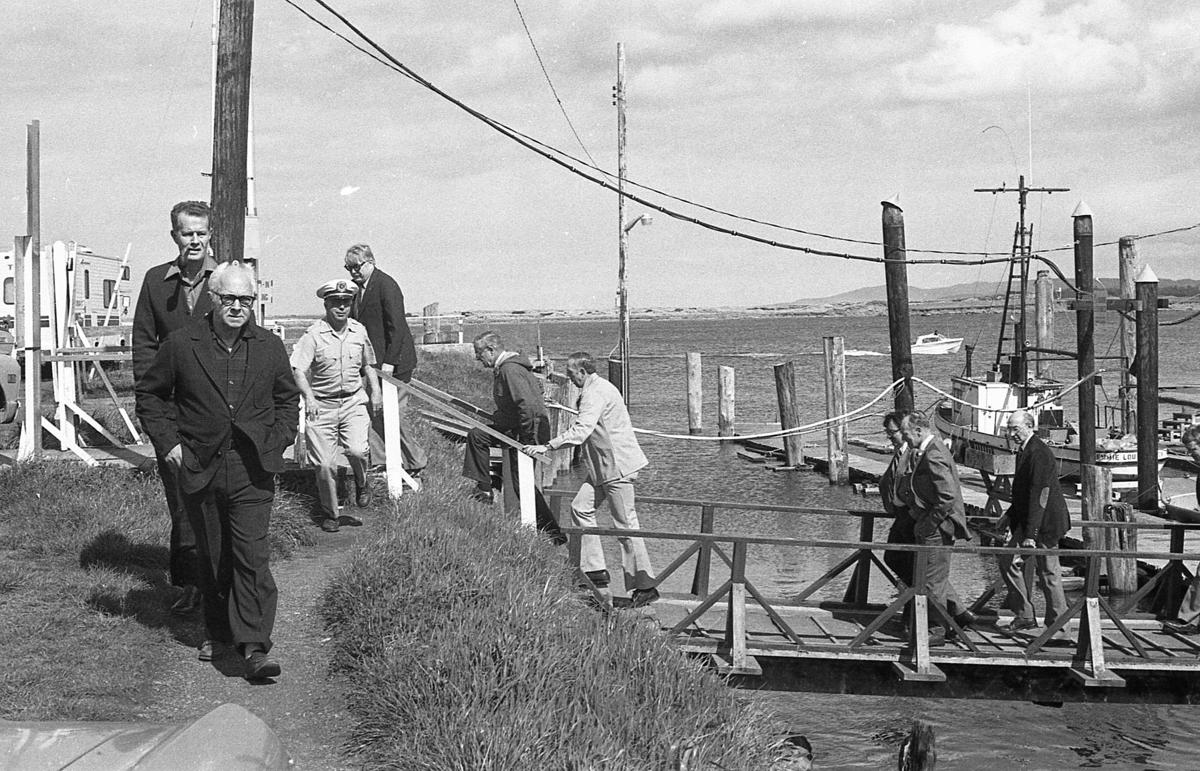 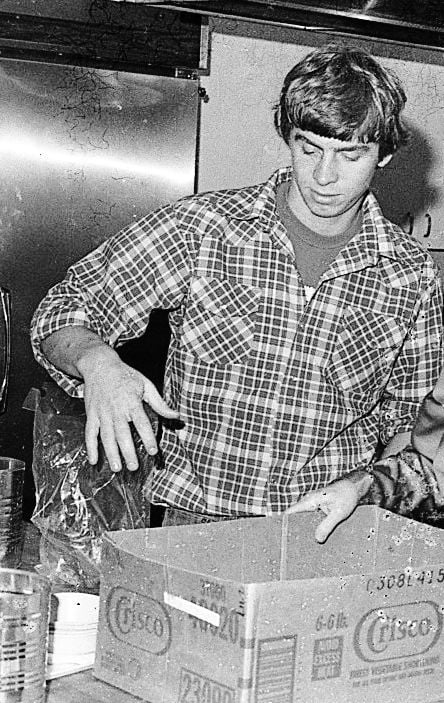 The first picture I am sharing was taken in the early 1980s during a visit to Bandon, and here the Port of Bandon, by Governor Vic Atiyeh.

As he visited the docks at the port, the Governor was escorted by members of the port commission, and other dignitaries.

During his visit, I remember that the Governor particularly enjoyed a visit to the Coquille Valley Dairy Co-op, and he walked around town talking to residents.

The second photo was taken in February of 1970 and appeared in a column written by Western World owner Warren Strycker concerning changes that had been taking place in the business community.

Here's what Warren had to say about the picture: "Hudson Realtors, which for a long time has done business through Tom and Elmer Gant at the corner of Highway 101 and 11th Street, is closing their office in Bandon.

"Elmer has retired after many years of being in business in Bandon ... and his son Tom has taken over the responsibilities of the Gant cranberry bogs on Rosa Road.

"Moving in behind the Gants in the same building is Ken Ruger of Ruger Real Estate, a relatively new business in Bandon .... a fact that doesn't apply to its owner who lived in the Bandon area for several years before his move here from Portland just a year ago." (Not sure that makes sense, but I didn't write it and knowing Warren he probably didn't let me proof it.)

The building is now the home of Core 10 Fitness. The service station across 11th was owned by Jack Paulsen and is now the site of First Interstate Bank. The Econo-Wash building that you can see on 11th, at right, is now home of the Dog Style Boutique.

Accompanying the column was also a picture of the real estate office across from the M&L Grocery and The Minute Cafe (now a flower and gift shop) which was being opened by Hogan Real Estate of Myrtle Point, by long-time Bandon resident Mary Dinsmore.

The third picture was taken in 1979 as long-time Lord Bennett's owner Rich Iverson helped out at the community Christmas dinner.

People are reminded that free community dinners will be hosted on both Thanksgiving Day and Christmas from 11 a.m. to 2 p.m. at The Barn in City Park. Everyone is invited to partake.

The City Council has extended a tentative offer to a Portland man, Dan Chandler, to be our new city manager, and he has accepted, pending the completion of the background and the signing of the final contract.

If all goes as planned, he should be on the job by Jan. 1.

The council feels fortunate to find a man of his caliber to lead us into the future and we are looking forward to working with him.

The first, of course, was the progress on the flashing pedestrian lights for the 9th Street crosswalk, which will probably be installed this spring.

I also asked them to look at lowering the speed limit on Seabird Drive from 35 to either 30 or 25 at the request of a number of people who live along Seabird. Although Seabird is in the city limits, the lowering of the speed limit still requires action by ODOT, including a traffic study and approval from Salem.

I also asked that they look at the Highway 101-Fillmore intersection (in front of the museum) to see if a right-turn lane could be added to the mix so that drivers could safely turn right from Fillmore onto the highway without waiting for the light to change. Presently there is an area of white grids and a bicycle lane, which ends at that location.

As I write my column Sunday evening, it is hard to believe that November is almost over with hardly any measurable rainfall. I still remember back when I worked at Western World that one November alone, we recorded 30 inches of rain. I keep hoping that I will come across that during my search of old papers. I remember it clearly; I just don't know what year that was.

People are reminded to think of our local merchants as they plan their Christmas shopping, and especially this weekend, which includes the Chamber's special Shop Bandon event on Saturday, from 11 a.m. to 3 p.m. For every $60 spent during the four-hour period, receipts can be turned in to the visitor center for a commemorative glass or a lawn ornament. Utilities, groceries, pharmacy, contracted services and filling station purchases are exempt.

A wine/nog walk is also part of Small Business Saturday (Nov. 30), with glasses for sale at Washed Ashore from 3 to 5. The wine/nog walk will be followed by the traditional lighting of the Christmas tree at 5:30 p.m., with Wild Rivers Coast Alliance Executive Director Jim Seeley doing the honors.