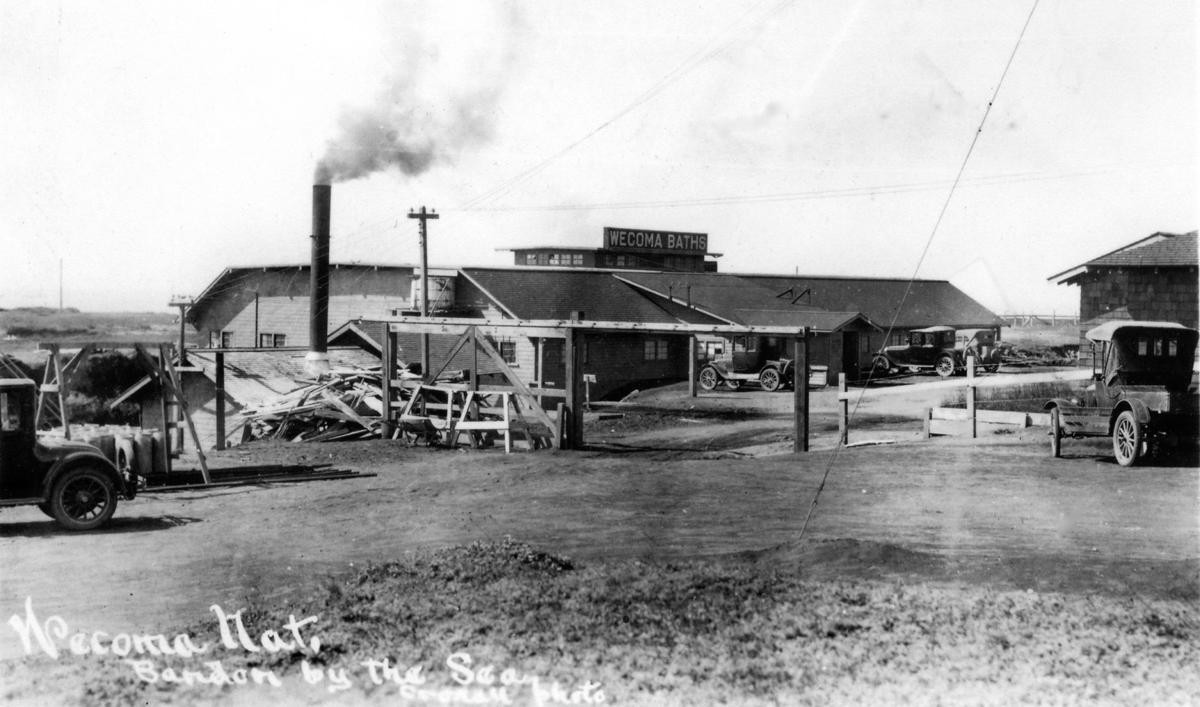 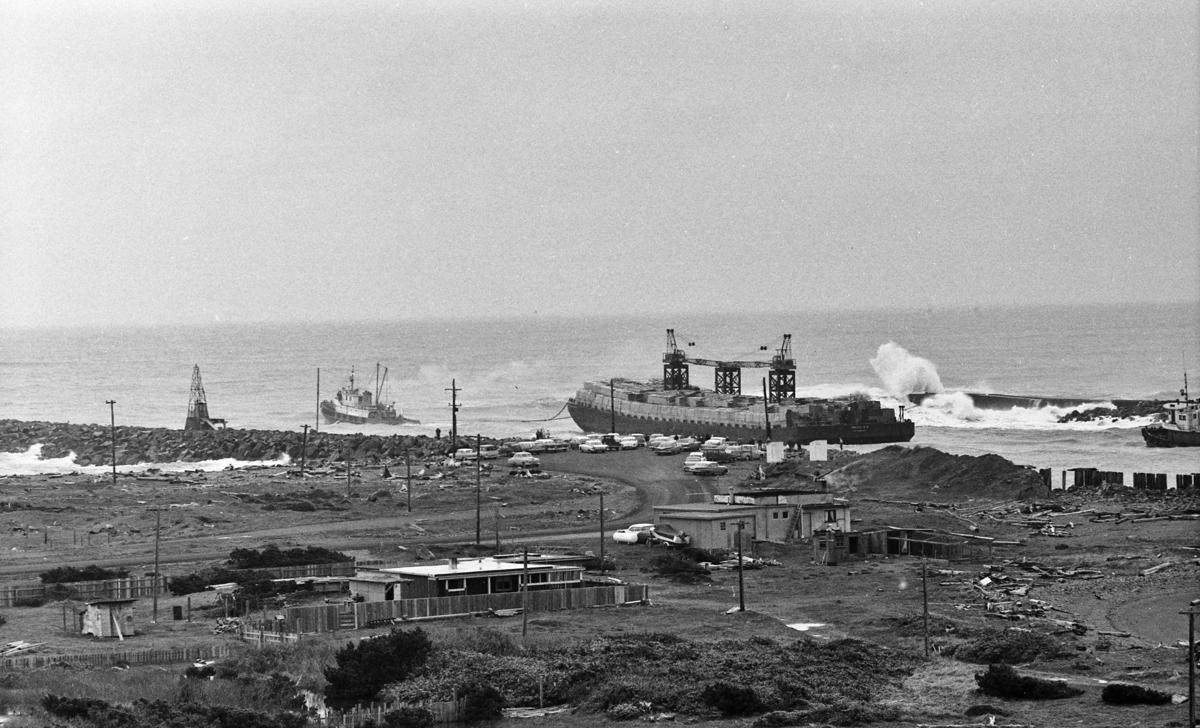 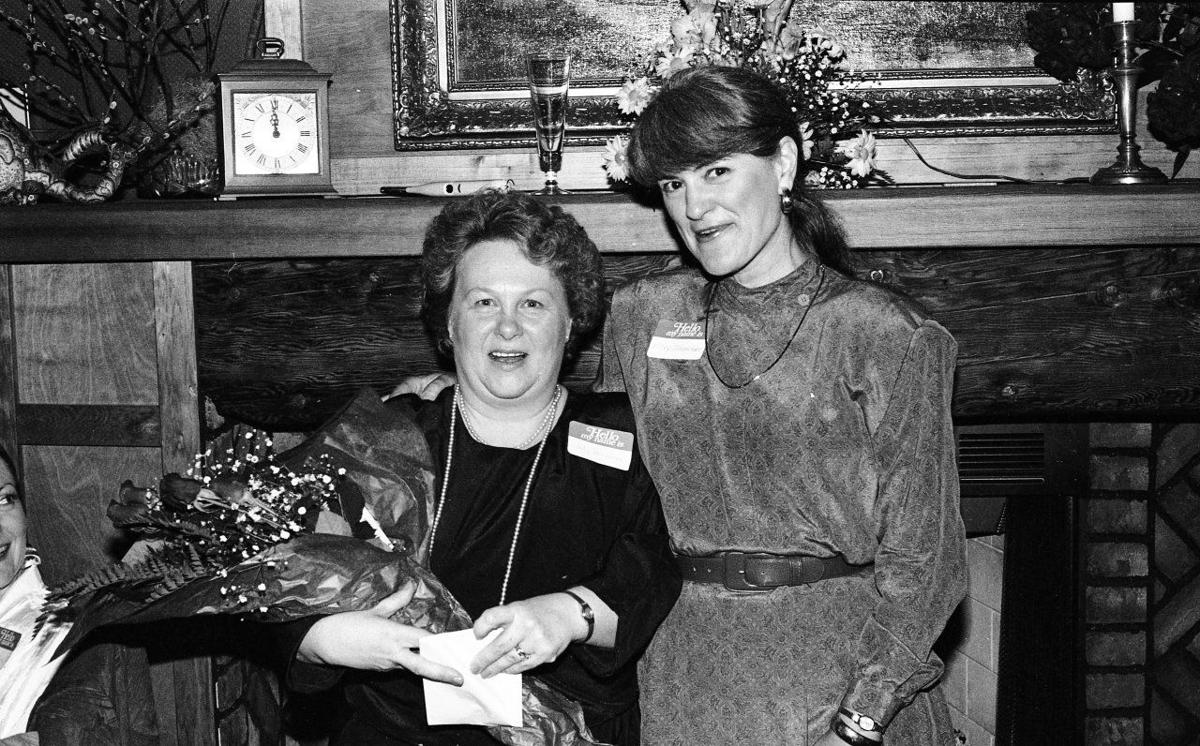 We've all heard a lot about the saltwater natatorium, Wecoma Baths, which was built by J.F. "Jack" Kronenberg in 1924 at what is now known as Coquille Point. For years, you could see parts of the building's foundation to the right of the stairs that lead to the beach and just west of the present motel.

I am reprinting part of an article, which appeared in the Western World in March of 1925.

"The entire building is so arranged and placed that it takes advantage of the natural contour of the land, and the view from the cottages east of the natatorium, which are a part of the same investment, is not obstructed by the building. In the upper end of the building appears a large rock that has been left just as it was, and which will be made a part of the decorative scheme."

It talks about an aquarium that was to be placed near the large rock, filled with salt water containing specimens of the many kinds of fish that were found in this region. A fireplace was to be built in one corner of the room.

"Mr. Kronenberg has endeavored to build, in the natatorium and the cottages, an addition to the city's attractions that will act as a magnet to draw tourists to the beach. Nothing else could make quite as strong an appeal to the visitor as a chance to swim in warm water.

"The dozen cottages that have been built on a knoll just east of the natatorium, will be rented to tourists who want to be close to the beach."

The natatorium had closed shortly before the Fire of 1936, when it was destroyed along with most homes and businesses in west Bandon. Kronenberg was the father of John Kronenberg and his sister, Jean Rittenour, both of whom live in Portland, although Jean also has a home in Bandon.

The second picture was a familiar scene in the 1960s as a barge, guided by tugs in front and at the rear, crosses the Bandon bar, loaded with lumber from Moore Mill & Lumber Co. This was taken in February of 1961 before the restrooms were built, as evidenced by the small wooden outhouses, which can be seen near the end of the barge.

Jim Proehl happened to come across this picture of Judy Densmore and me while he was scanning in the Western World negatives from the mid-1980s. As out-going president of the Bandon Chamber of Commerce, I had installed Judy as the new president. Later she and I became the only two women to serve as mayor of Bandon. Judy's grandfather, Herbert Brown, and her father, Vern, built Sunset Motel, which continues to be operated today by the fourth generation of the family, Judy's son, Bryan Longland.

I remember that the year I was elected president, we had a sit-down dinner for 220 people in the former Harbor Hall across from Lloyds, which now houses Second Street Gallery and Coastal Mist.

I ran across an article from Oct. 7, 1926, when Governor Walter M. Pierce was to be the guest speaker at the chamber banquet and election of officers, held at Hotel Westland. He was a personal friend of the chamber president, C. R. Wade, grandfather of Marilyn and Margaret Wade.

I know a lot of people are disappointed that Bandon, like most other communities along the coast, have decided to forgo their fireworks display this year. Believe me, we are all disappointed, but after talking at length with Fire Chief Lanny Boston and others, we felt we had to err on the side of plain old common sense.

Lanny knew how hard it would be to deal with large groups of people, congregating here for what could have been the only fireworks display on the coast. He told me he did not want his people (firefighters) to become exposed and "take it home to their families. I also don't want to have OSHA step in," said Boston. "I think you made the right decision."

But Lanny said he could see no reason why the two fireworks booths that sell each year in Bandon could not continue to operate as they are required to have a permit. "If people can't buy their legal fireworks here, they will just go somewhere else," he said. He hopes that if people are going to shoot off fireworks on the Fourth of July, they do so in a safe manner.

He and I had both heard that OSHA, the enforcement agency for the Governor's re-opening and stay at home orders, had shut down a local business for a couple of days for not complying with the rules. He said the only ones that are exempt are small "mom and pop" businesses, who do not have employees. He also was asked if the City had anything to do with the enforcement, and he told them no, that is a state function.

Boston talked further about what this fire season will look like, with agencies, like US Forest Service, state forestry, Coos Forest Protective Association and others having to deal with large cuts in their fire-fighting budgets. "That will impact all of us," Boston told me. Instead of a crew bus going out to fight a fire with six firefighters aboard, with the new social distancing rules in place, it would cut the number of passengers to four. All of these restraints are going to impact the way wildland fires are fought.

I learned recently of the death of long-time resident Ron Kasper, who was in his 80s. Ron had suffered from heart disease for some years according to a friend, and on May 4, he felt sick and decided to drive himself to the local hospital. But as he drove east on 11th Street toward the hospital, he apparently suffered a heart attack, and slumped over the wheel, with his foot pressing down on the accelerator. His car went into the cul-de-sac at the hospital, crashed through the landscaping and went over the bank between the hospital and the clinic, before bursting into flames, according to Fire Chief Lanny Boston.

I had a former student of Tom Edson's ask me for an address for Cindy after learning of Tom's death. So if anyone would like to send her a card, her address is 1224 NE 53rd, Portland, 97213.

I read something the other night in the New York Times that stunned me. It seems that when authorities were rescuing people from their flooded homes in Michigan during the recent unprecedented flood they had to take "social distancing" rules into account. I guess they couldn't have too many people in a rescue boat at one time??? My guess is if I were in danger of drowning, Covid-19 might be the last thing on my mind. I've heard a lot of stupid things lately, but this one topped them all. Well, at least for this week ....

If you haven't filled out the new census form, it's easy. All you have to do is go to 2020census.gov and fill it out. It takes less than 10 minutes and is important for everyone to be counted.

There have been reports about people in the Bandon area experiencing a larger than usual number of ticks on their animals and on themselves after a walk in the woods. Deer ticks are known to carry Lyme Disease, and people are urged to use caution, as this is a disease that can have long-lasting and debilitating health problems.