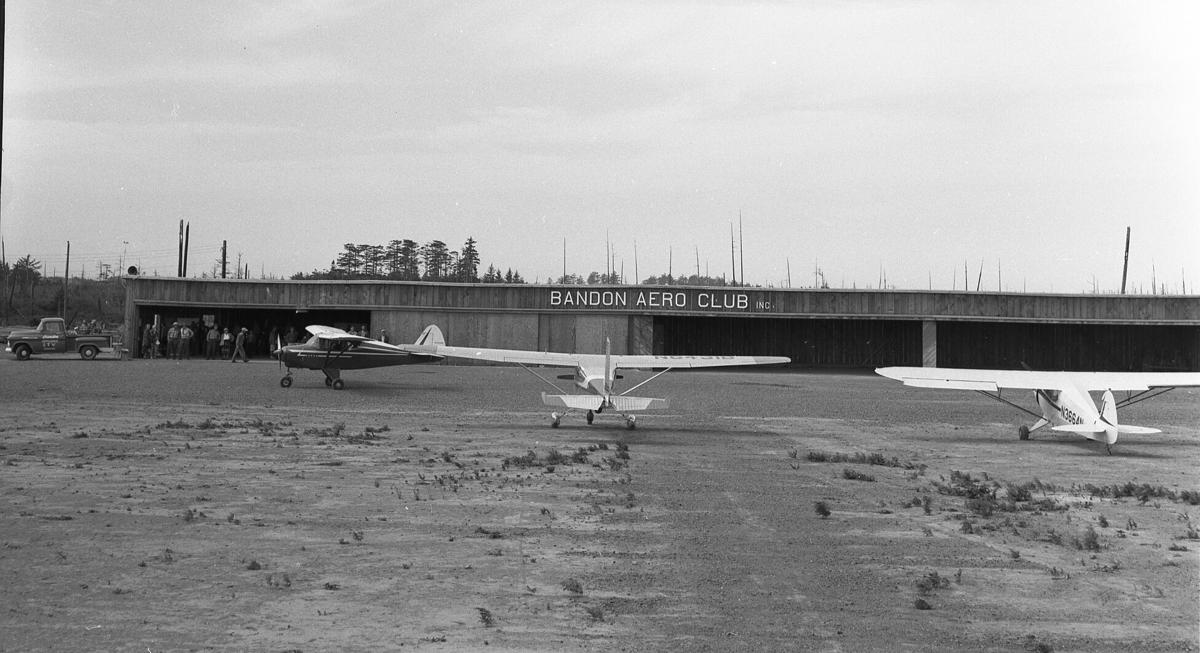 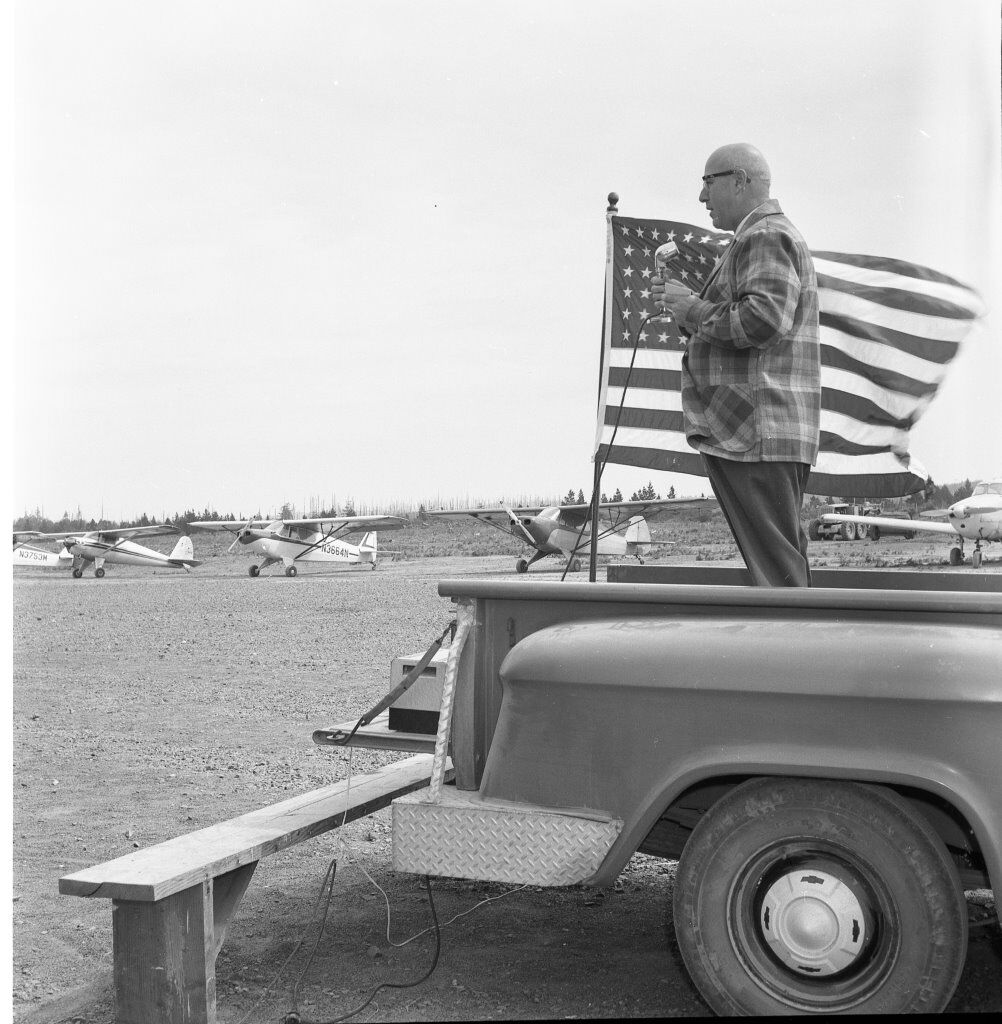 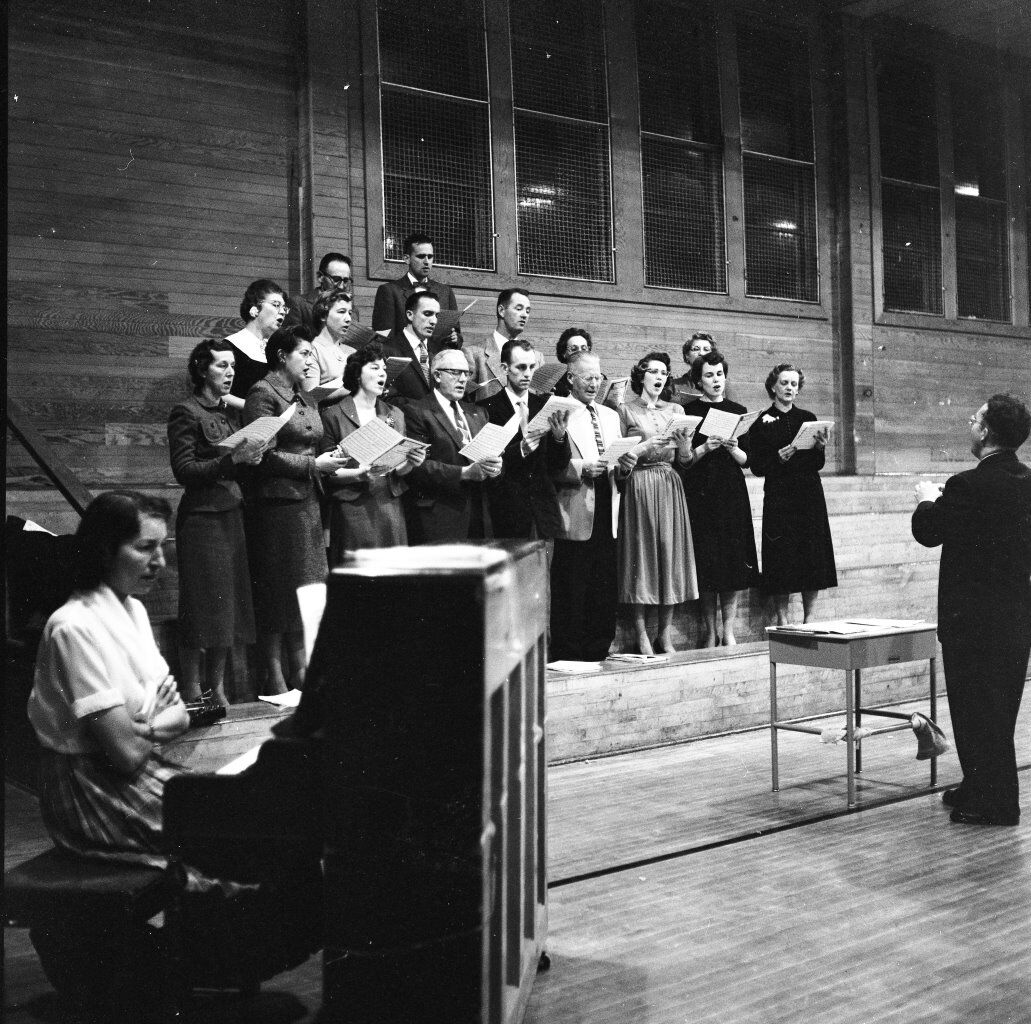 My first photo this week has to do with the formation of the Bandon Aero Club and the building of the Bandon State Airport. The headline of a story in the April 4, 1957, Western World reads; "Clearing Starts At Airport Site."

The State Board of Aeronautics had accepted the offer by Kehl, Inman and Albertson, along with Grady Younce of Gold Beach, of an 80-acre tract of land lying east of the state highway department weighing station south of Bandon, for the purpose of building and maintaining an airstrip.

After checking out the layout, the state gave Albertson the "go-ahead" to start clearing the brush, windfalls, and the cover off the site and work was begun immediately.

A state official told members of the Bandon Lions Club that the airstrip would probably be an all-weather field, with gravel runways and grass between, when first constructed.

The Bandon Aero Club planned to incorporate as a non-profit organization with activities to be both aerial and social, with the immediate purpose of actively promoting and siting the establishment of the new airport south of town.

Building an adequate road from Highway 101 to the airport site was the first project, to be followed by construction of club house and hangar facilities (pictured above) at the field.

The second photo was taken 16 months later during the formal dedication of the Bandon Airport, which included an early fly-in, drive-in breakfast, sponsored by the Bandon Aero Club.

Principals in the program included, pictured above, Melvin Boak, president of the Bandon Chamber of Commerce, who addressed the crowd. Others taking part in the program were Chet Raines, Aero club president; Howard Kehl, past president of the Aero club and one of the group of land owners who made construction possible; School Supt. Roland L. Parks, master of ceremonies for the chamber, and Mayor Eddie Waldrop.

The third photo will bring back a lot of memories for old-timers who will remember many of the people in this photo, taken in December of 1957 as the new Bandon area Community Chorus presented a Christmas concert in the Ocean Crest Grade School gym. In those days, the gym was pretty much "it" when it came to large gatherings, including the 1957 high school graduation (my class) ceremony. The only other place where social events were held was the dining room at Lloyd's Cafe.

Curtis Starr directed the choir, with Mrs. Evelyn Chesselet, at left, as the piano accompanist.

I learned just after I wrote my column that my long-time friend and 1966 BHS graduate Jill Chappell Sumerlin died Sunday evening, July 26, at her Tillamook home. Details will be forthcoming from the family.

The Bandon Western World headline "a modified Cranberry Festival is a go" generated a lot of negative comments on Facebook, which made me wonder .... until I read the article.

The writer, Amy Moss Strong, detailed the well thought-out plan presented by Chamber President Anthony Zunino that could allow the festival to go on ... in a modified, scaled back form, including the possibility of a virtual coronation, outside dining (to allow for social distancing), and no regular parade. He did say that maybe there could be something similar to what the Bandon VFW organized for the Fourth of July, which involved a festive impromptu car and truck parade throughout the community.

Whether or not Zunino, who has served as the long-time and hard-working chairman of the Festival for years, will be at the helm this year remains to be seen as he's not happy about being thrown under the proverbial bus ....when he was trying hard to put something together for the community, while staying within the Governor's guidelines.

This might be the time to mention that a scaled down version of the Brookings Azalea Festival was held last weekend and I understand a music festival is on tap for a resort in Gold Beach next month.

Thanks to Amy for the well-written article and to Anthony, for continuing to do his best for our community. If it sometimes seems like a thankless job ..... maybe that's what we should be addressing.

I was sad to learn of the death of former long-time Bandon resident Ann Kemp, widow of Cecil Kemp, who died July 16 a few days shy of her 98th birthday.

After living in Ocean Ridge Assisted Living in Coos Bay for 14 years, her daughter, Pam Kemp Paugh, moved her to her home in Nampa, Ida., a month ago.

Cecil died in 2014, and at that time, they had been married 69 years. Pam said her mom was "sharp as could be. I'll most remember my Mom for her supportive role in my Dad's many activities, both community and church, and her love of family," Pam said.

Her immediate survivors include her four children and their families, Bob Kemp of Newport, Pam (Kemp) and Bill Paugh of Nampa; Patrice (Kemp) and John Baugher of Vancouver, Wash., and Susan (Kemp) and Bob VanZelf of North Bend.

If you're wondering, like I am, when the grass (or more like a field of dandelions and dry hay) at the local post office will be mowed, it's anyone's guess.

I have twice talked to the postmistress about it. The first time she told me she needed three bids for the work, but at that time she had only two. Two weeks later, I mentioned it again. This time she said she only had one bid.

So, if you know someone who would bid on the mess at the post office, please have them submit a bid. It appears that is the only way this eyesore will be taken care of.

I'm about ready to grab my trusty weedeater and do it myself.

This is nothing new for the US Postal Service as the grounds have been this way at least the last three summers .... but I don't remember it going this long before something was done.

The fire chief planned to talk to someone about it last week, but I am not sure of the outcome .... since the fire hazard (particularly along Baltimore) was still there Sunday night.

Two of my sisters and I spent Sunday swimming in the Sixes River and giving thanks that we weren't in the valley or the metropolitan area where temperatures were expected to reach nearly 100 degrees. The weather was perfect, with virtually no wind. The only negative was a huge explosion of horse flies .... or whatever those biting kind are called. But a little Deet pretty much kept them away.

An article in the July 20 New York Times was headlined "Deaths from Covid-19 slowed, but now they're catching up again."

And although Oregon's "daily death per million" (0.8) was among the lowest in the country, we were the third highest in the statistic as to how daily deaths have changed since June 1.

Arizona led the unenviable list with an increase of 319 percent since June 1, followed by Texas (+307 percent) and Oregon, plus 267 percent. Other states whose rates have increased over 200 percent were Tennessee, Idaho and Florida.

States like New York and Massachusetts, who peaked much earlier than did Oregon, showed big declines in the Covid-19 death rate since June 1.