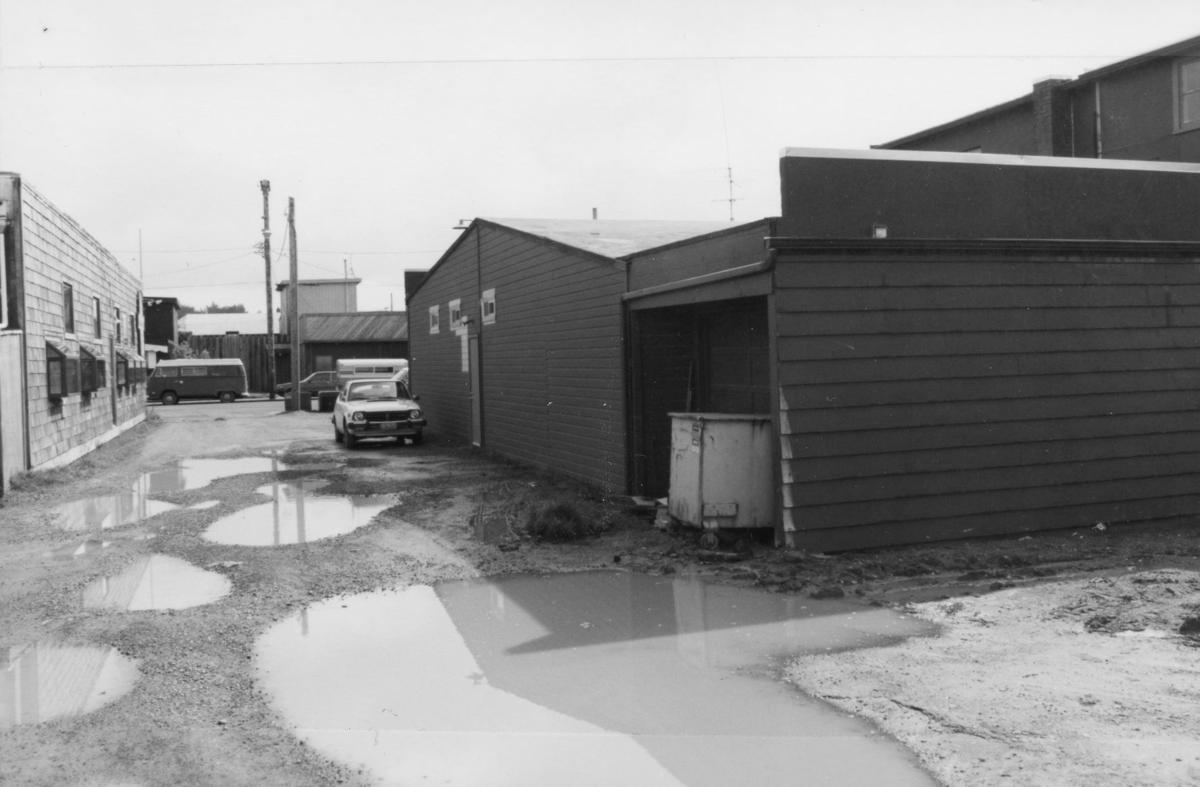 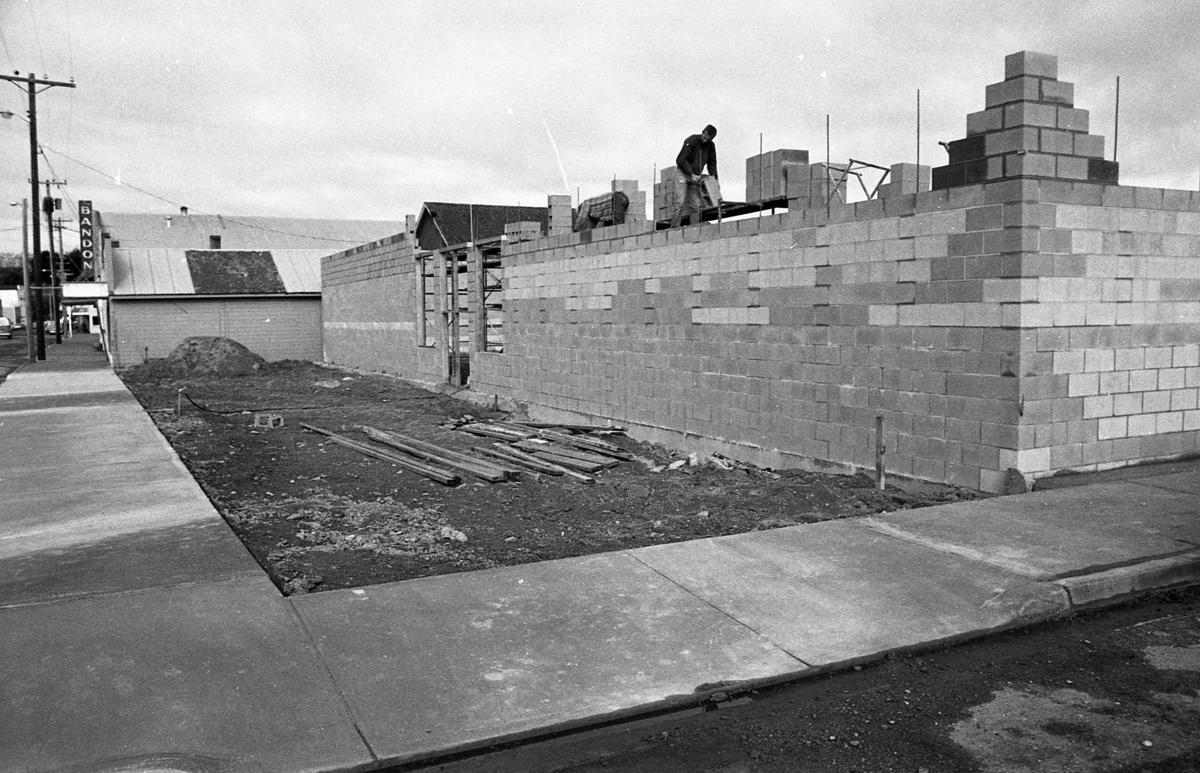 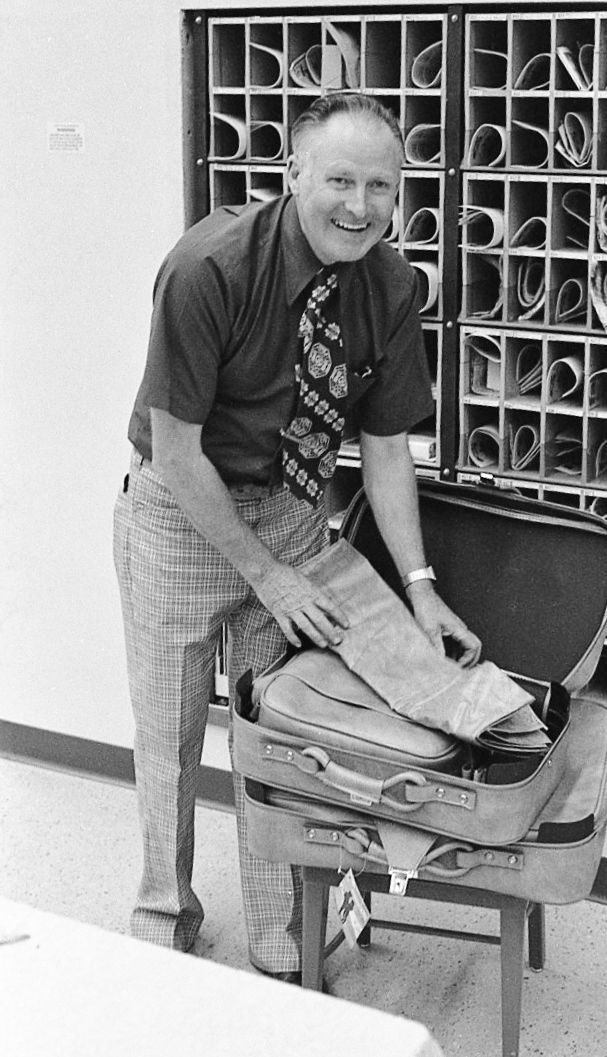 Jack Ward retires in 1973 as postmaster

Jack Ward retires in 1973 as postmaster

I love this first picture, mostly because this area looks so different today. I am guessing that it was taken in the late '70s or early '80s before Old Town's facelift, looking east from the area behind The Minute Cafe. I could be wrong about the date as the small colored picture was not dated, so I am just guessing.

This area is now the Pedway between the back of The Continuum building (at right) and Foley's Irish Pub (at left). Today the Pedway is paved and beautifully landscaped between Alabama Avenue (alongside Olivia's Seaside Merriment Cottage) and Baltimore Avenue. And ugly dumpsters, like the one in the picture, have been moved to a more central location. This photo was taken before the Continuum Center was remodeled as you can see there is no back entrance like there is today. The space where the garbage tote is in this picture has been remodeled into what today is Jen's Joint, a popular cafe, with its own door leading out to the Pedway.

The second picture was taken in the late spring of 1975 as Melvin Boak was rebuilding McNair Hardware, which had been destroyed in January of that year in what was determined to be an arson fire (almost a year to the day after another arsonist burned our high school to the ground). A burglar was attempting to open the safe inside the hardware store when the store caught fire and was completely destroyed.

At the time of the fire, Melvin estimated it would cost $50,000 to rebuild, plus another $60,000 for the inventory that was lost. The safe contained all his accounts receivable records and corporation papers. At the time there was about $11,000 on the books. I remember that it was a lot like the M&L Grocery and Croxall & Perry Grocery, most families had a charge account at McNair's.

The Hardware fire came less than a year after Bandon Market (formerly Davison's Market) burned just to the east of the McNair's. Although police said they did not think it was arson, two Bandon men chased someone away from the building, but they could never prove that he had started the fire.

In December of 1974, an arsonist set fire to Perry Bros. Veneer plant (at Rosa Road and 11th), which completely gutted the north end of the plant.

The hardware store building is now home of Bandon Brewing Co. and Bandon Vision. Just to the left in the photo you can see the former Sadye's Confectionary building which is now Alloro Wine Bar. Down the street was the Bandon Theater, which has long since been torn down and is now a vacant lot between Bandon Coffee Cafe and the Washed Ashore building.

The grand opening for the new cement block McNair Hardware building was in September of 1975....some eight months after the fire. Bandon Market did not rebuild and is now a parking lot at the corner of Delaware and Highway 101.

The third photo features Jack Ward in 1977 as he retired as postmaster after 30 years at the Bandon Post Office, having started his career as a clerk. Most of his years were spent in the old post office on Baltimore Avenue, which is now the home of Foley's Irish Pub. That building was owned by George Kronenberg and Eddie Waldrop and was built specifically as a post office. Jack was instrumental in moving the post office to its present location, which opened in late 1975.

Jack and his wife Shirley also owned the Bandon Theater, and were my landlords during the years I lived in the upstairs apartment from 1969 to 1976 ... for $75 a month.

Their daughter Sharon Ward Moy and her family recently moved back to Bandon to make their home; their other daughter, Peggy, is married to Bayard Forrest, and the family has a home in Pagosa Springs, Colo.

I saw an article in the local papers recently about the death of John Hepburn, who was missing from a facility in North Bend and some time later his body was found over an embankment in the Cape Arago area.

Although most locals did not know him by name, John and his lady friend were around Bandon for a number of years and could be seen at all hours of the day walking around town ... sometimes in the middle of the street and pulling a wagon.

I had hoped that he and his friend would receive the help they needed when they left Bandon, but I was sorry to read about his death at the age of 54. He had been living at the People's Place, a boarding-room style nonprofit in North Bend.

I was working at Western World years ago when Ocean Crest School decided to broaden its honor program to reflect character rather than just academic achievement. And that decision has meant a lot to many young children over the ensuing years.

The character for December's "Caught You Being Good" honor was empathy, which is certainly a trait that deserves to be honored as it seems there is far too little of it in this age of "social" media and contentious discourse.

It's fun to read the names of the youngsters honored, from kindergarten through fourth grade, as well as what they have done to deserve the award. The article also includes a photo of the youngsters, which makes it even more meaningful for the children and their parents.

If you want to lighten your day, read closely the article in the Jan. 25 Western World to see what Ocean Crest School children were "caught" doing that garnered them the award.

Bandon lost two native sons last week, with the death of Kenneth Lee, 82, and James Allen "Jimmy" Cooper, 62. Both men died on Jan. 20. Ken Lee was a long-time EMT and worked for Southern Coos Hospital for 38 years, often on the ambulance with the late Dave Elliott.

Among his survivors are his wife Betty, sister Virginia Weaver, twin brother Robert Lee, three sons and a daughter.

Jimmy Cooper, who lived in Coos Bay, was the son of Connie and George Cooper and leaves many relatives, including his sister, Charla Lusk.

I had no more than finished writing my column (early Sunday afternoon because I wanted to watch the Oregon-OSU women's game and the Grammy's) when I learned about the tragic death of Kobe Bryant and his 13-year-old daughter, herself a rising basketball star, in a helicopter accident, apparently on their way to her game. Latest information is that there were nine people on the helicopter when it went down in California.

He was a personal friend of Oregon's Sabrina Ionescu and she took it particularly hard, which was to be expected. Not only was he a basketball legend with the Los Angeles Lakers, but he was a huge supporter of women's basketball. What a loss.

When the Gorse Action Group is in the weeds, it’s literal, they have a lot to say about it.

Get a summary of today's local news on the go with our Daily Headlines newsletter.