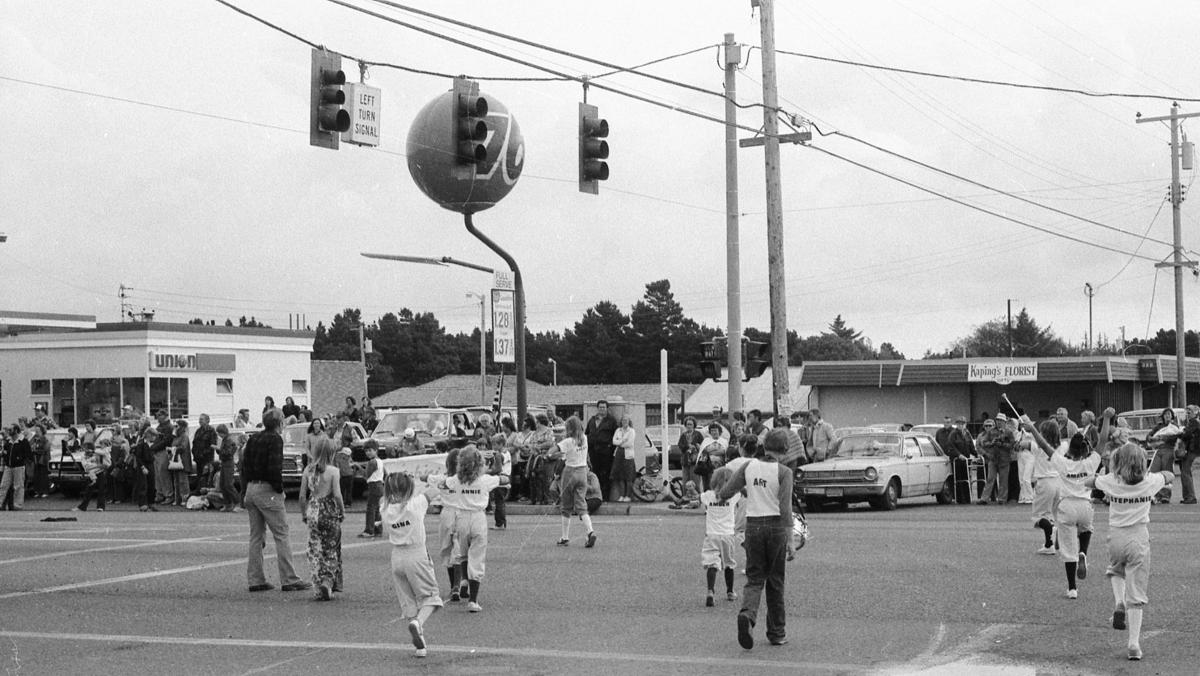 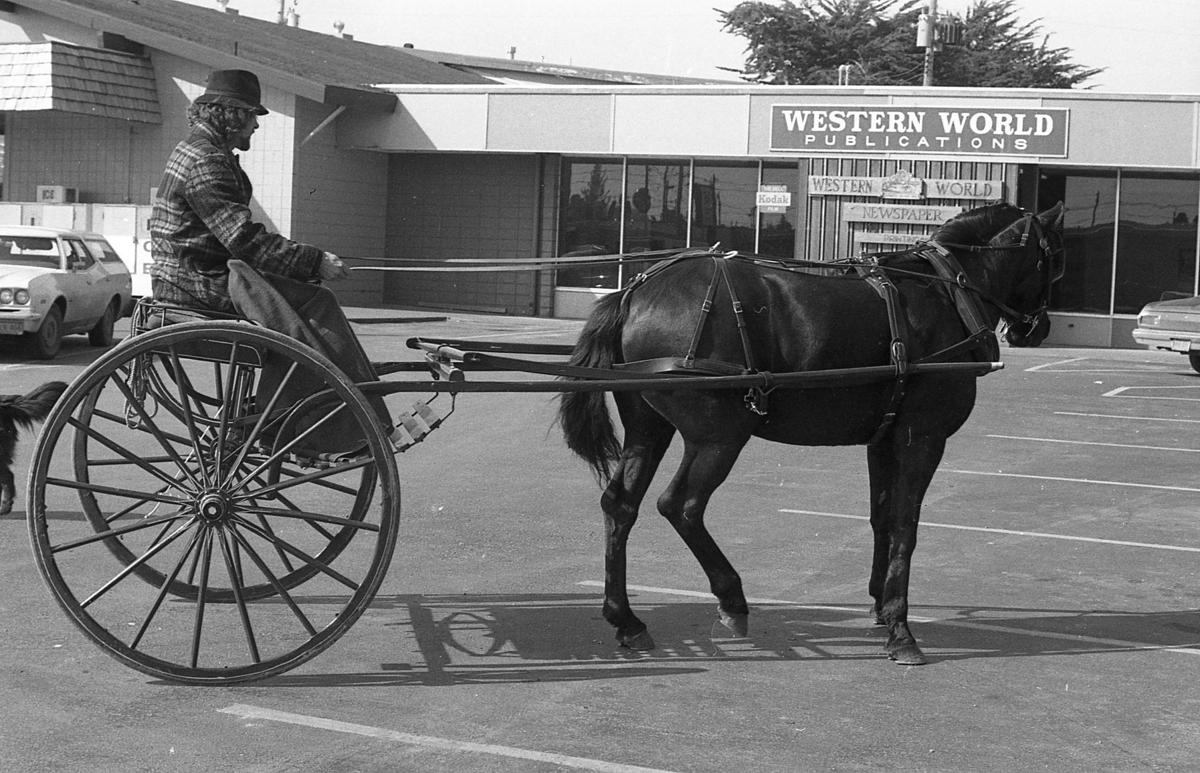 Horse and carriage in front of Western World office, 1981 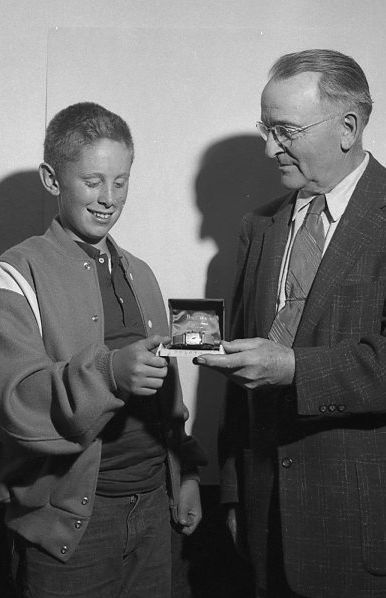 Horse and carriage in front of Western World office, 1981

Although I can't identify any of the kids in the first picture I am sharing, taken during the Cranberry Festival parade in 1982, I think it shows how much the Highway 101/11th Street intersection has changed over the years. I do see teacher Mike Lafayette marching with the kids, so they are probably from the middle school or junior high. At left you can see the Union Station, which is now the site of the building, recently purchased by Pacific Properties, that housed Bandon Video for many years. At the far right is Kaping's Florist, the florist shop now owned by Mary Cameron. Behind the service station, you can see part of the brick building that was the home of Western Bank (which started out as Bank of Bandon) for many years. That building was later replaced by the bank building that is now at the intersection of 101 and 11th (just a bare lot in this picture) and is home to Banner Bank. Note that the price for regular gas was 1.28.9 at that time.

I remember taking the second picture for no particular reason except that it was unusual to see a horse and buggy in the parking lot in front of our building. This is in the McKay's Market parking lot, in front of Western World, which, when this was taken in 1981, had occupied the east end of the McKay's building since we moved up there from the old bank building (now Masonic Hall) in about 1965. A couple of years later the paper moved downtown on Second Street into what is now a real estate office in the east end of the building that houses Washed Ashore and Broken Anchor. After the paper was sold to Susan Price and Melody Gillard Juarez, they purchased the old home where the paper is now on 12th and Baltimore.

I love this third picture of two of my favorite guys taken in August of 1956 as my grandfather, L.D. Felsheim, owner of Western World, hands a Bulova watch to Ron Sutherland, who won the prize for selling the most subscriptions to the paper. I had to confirm with Ron exactly when this picture was taken as the date wasn't on the negative envelope.

Ron, as most of you know, was the oldest son of Bandon's long-time and highly successful football coach Dick Sutherland ... also one of my favorites.

For those of you who are wondering how the money raised by the city utility rate increase, which was overturned by the courts last month, was to be returned, the council agreed with the recommendation of our new city manager that we issue people a credit on their next month's utility bill. Funds had been withheld since July, and the average credit is expected to be about $100.

The Bandon Crab Fest, which proved to be very popular last year, will return again this year in a slightly different format .... with a Saturday night dinner as well as a Sunday afternoon meal.

Sponsored last year by Lori Osborne as a fundraiser for the Bandon History Museum, the event has been taken over by the Chamber board, of which Lori is a new member.

Cost of tickets are $45 for a crab dinner, or $50 for a prime rib dinner. Hot-dogs will also be available for children.

Tickets for the event, which sold out last year, are available at www.bandoncrabfest.com.

The photos that were posted on Facebook Saturday of the King Tide which hit the Oregon coast this weekend were phenomenal. Nothing could show the power of the ocean like the crashing waves, which moved water and driftwood into areas that aren't usually drenched.

Unfortunately, like so often happens, tragedy struck ... on the northern Oregon coast in Clatsop County when a Portland man and his two children were swept into the sea near the Clatsop County/Tillamook County line at Falcon Cove. The father and his 7-year-old daughter were rescued, but she later died in an area hospital. As of Sunday evening, the 4-year-old boy's body had not been found. The family was from Portland.

My heart goes out the father, who was carrying both his daughter and his son when the wave struck them.

Earlier in the week several locals had posted pictures of people on the north jetty, in what looked to be an extremely dangerous situation. Most locals know enough not to endanger themselves or their loved ones; but no matter how hard we try we don't seem to reach our visitors with that information. Or maybe they think it won't happen to them ....

The Arizona State women's basketball team defeated previously unbeaten (and ranked No. 3 in the nation) Oregon State Sunday afternoon .... after handing the nation's No. 2 Oregon Ducks its second loss of the season Friday night. Had Oregon been able to beat Arizona State, they might have moved into the No. 1 spot after Connecticut lost to Baylor ... but it was not to be. (Baylor snapped UConn's 98-game home winning streak). Oregon State had a chance to move up from its No. 3 position had they been able to beat Arizona State but the Sun Devils had other ideas.

It's still pretty unusual for two of the top five teams in the nation to be located within 50 miles of each other.

I can't wait until the two teams square off later this month: Jan. 24 in Corvallis and Jan. 26 in Eugene. Those will definitely be sold-out games.

It appears that UCLA is the only unbeaten women's college team in the nation as they defeated Utah and Colorado over the weekend, while previously unbeaten North Carolina State lost to North Carolina.

I, for one, applaud the recent decision by OregonLive to eliminate website comments, which many other news sites have done in recent years.

The Oregonian editor explained that very few people contributed to the vast majority of comments on the site ...adding "some of these conversations are uncivil, even downright nasty at times. Moderating the comments for off-topic posts or personal attacks takes time and resources that are better spent producing independent local news."

As one reader put it, in a letter to the editor: "In a society dealing with unrest, there is no need to encourage thoughtless, hurtful comments that serve no purpose other than to inflame others."

It was neat to see that former Pittsburgh Steeler Troy Polamalu was selected as a Pro Football Hall of Fame finalist. I still remember when Troy was playing football for Douglas High School in Winston during my years covering sports for the Western World. He also played college ball for USC.