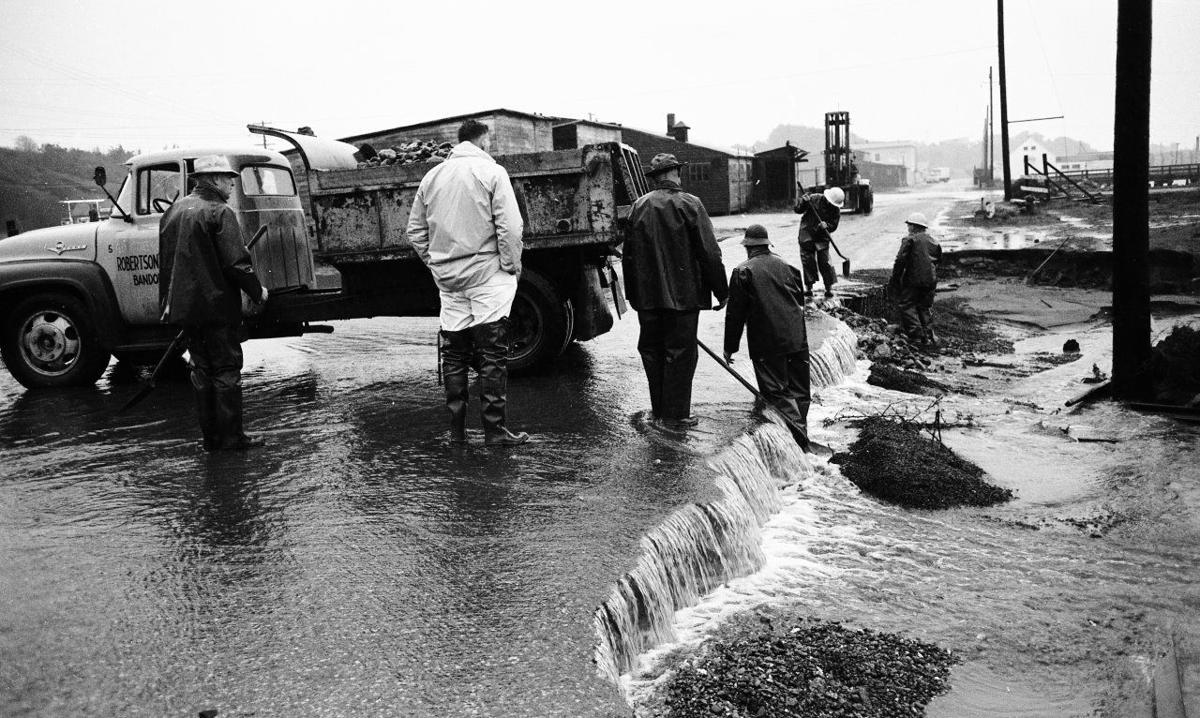 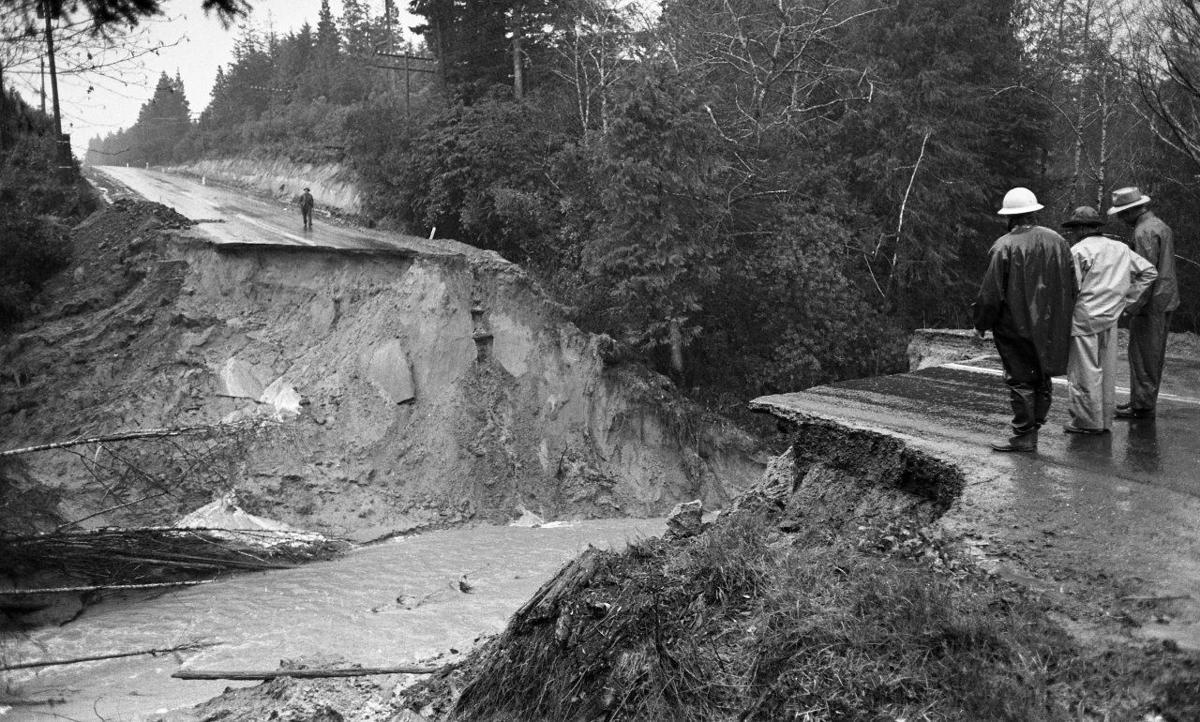 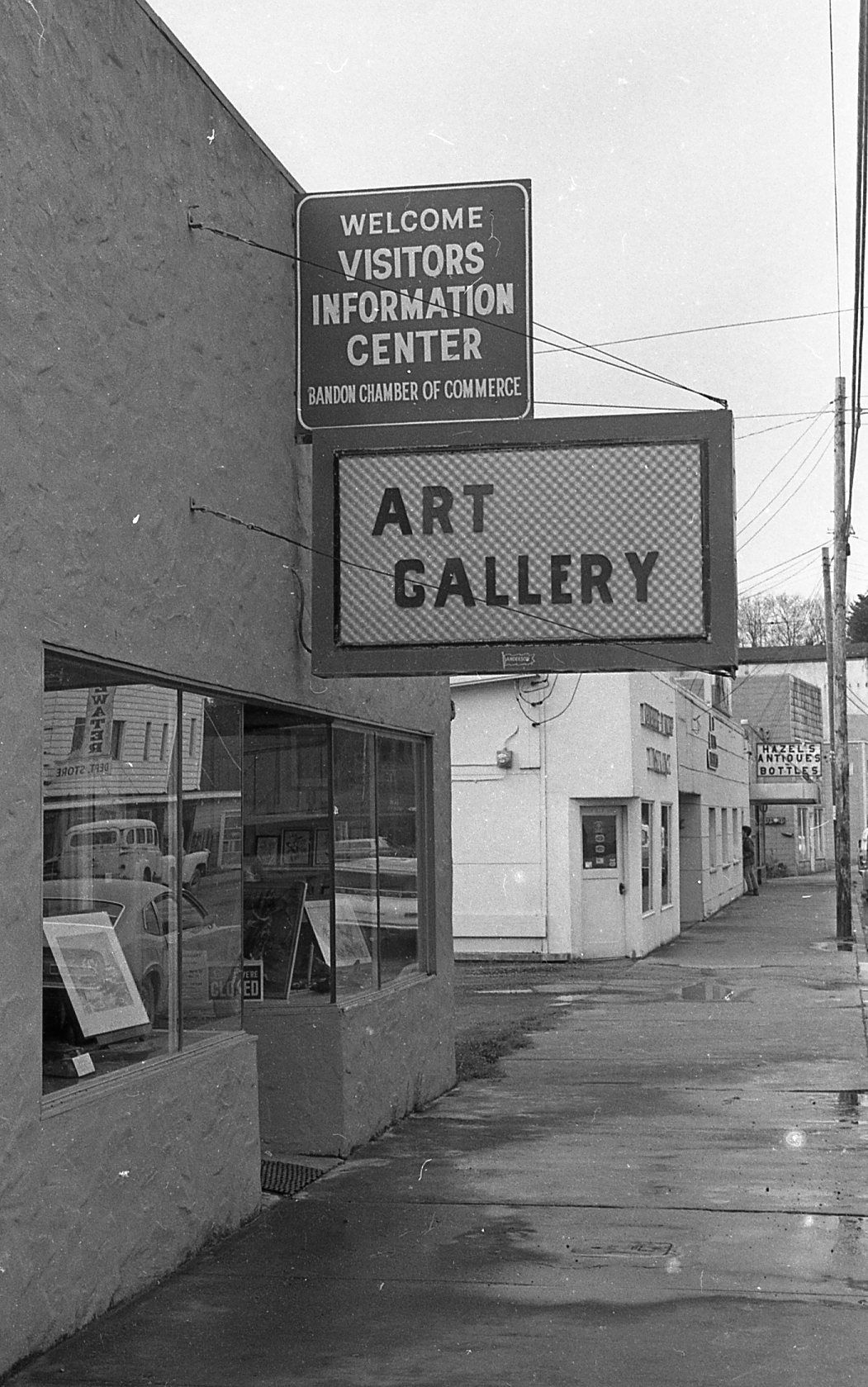 We often think of winter as being November, December and January, but historically two of our biggest storms, including the following pictures from February of 1961, didn't come during those months. The other, of course, was the Columbus Day Storm of October 12, 1962.

In mid-February of 1961, Bandon was inundated with over seven and a half inches of rain in a two-day period, which resulted in a great deal of flooding.

As a result Ferry Creek flooded that end of town until the waters eventually found an outlet into the river over First Street between Elmira Avenue and Riverside Drive, pictured here.

The first photo shows the Bandon Public Works crew, with help from Robertson's Sand & Gravel, dumping rip rap along First Street, trying to keep the roadway from washing away. Among those pictured are, from left, City Manager John Fasnacht, Police Chief D.S. MacDonald (in light clothes), Joe Harris, Bob Hiley, Jack Potterf and Harvey Hiley. In fact, the next time I see Harvey down at the museum I will ask him if he remembers this night ... nearly 60 years ago.

The caption beneath the picture explains that the city power line crew took part to save a power pole which carries the line to the Moore Mill, but they aren't pictured.

Buildings in that end of town that were impacted included the cheese factory (about where Face Rock Creamery is now), which had three inches of water over its floors, while its subsidiary, the Surfside Dairy (across Third Street) was submerged in about two feet of water.

Fortunately, for those businesses, the obstructed drainage which caused Ferry Creek to routinely overflow in the years after the Fire, has been addressed by the state.

Total rainfall for Bandon between Feb. 1 and 15th that year was 12.89 inches.

I had only been working for the Western World for two years when this big rain storm hit but I definitely remember when Highway 101 nine miles south of town washed out.

As seen in the second photo, the entire roadway across the gulch for a distance of 200 feet and 35 feet in depth was swept way.

Men on the right, standing on the edge of the break, were members of the state highway maintenance department who were making plans for immediate repairs. The man across the way was likely a Curry County resident wondering how he was going to get across.

The third photo was taken in 1972 in downtown Bandon on the south side of Second Street. As you can see the Bandon Chamber of Commerce Visitors Information Center was located in the art gallery, across from Lloyd's Cafe, in the building that now houses Coastal Mist and Second Street Gallery. Looking down the street is Kronenberg & Waldrop Insurance (now Sassy Seagull), the pharmacy building (now Winter River Books), and Hazel's Antiques (now Bandon Baking Co.)

The reflection in the art gallery window shows Edgewater's Department Store on the next block (now the Continuum Center and previously the Golden Rule). I particularly love this picture because you can see how far we have come in sprucing up the Old Town area.

Speaking of rainfall, Gerry Terp sent me the December rainfall figures, which indicated we had 12.01 inches of rain for the month, which was considerably more than the two previous years (4.62 and 7.72).

I saw an article on the front page of The World last week that definitely grabbed my attention. It was titled "Strapped Cities Looking to Sell Sewer Systems." In the body of the article it talked about cities who are selling both their water and sewer utilities to private companies as they can no longer generate the revenue necessary to pay the costs of the public pensions.

The article talked about a number of cities across the country who are considering selling off their utilities, which will not bode well for the consumers, who will have no say in the rates they pay.

But it is certainly something that cities, like Bandon, have the option to do, as what private company would not want to buy what is essentially a monopoly business to provide such essential services.

If you haven't read the article, it is worth the time to do a Google search and read it.

If you haven't had a chance to see the 40 photographs from my collection of old Western World negatives (mid-to-late '50s and early '60s) now on display at Robin Miller's office building, the Bandon Professional Center, just south of Bandon Shopping Center, you don't want to miss it.

I understand the photos will remain up through most of the year. The photos are displayed along the hallways upstairs, so you won't be interrupting anyone's private space if you take the time to visit.

These are part of the 30,000 plus negatives that I saved in the early '80s from being hauled to the dump by one of the many owners of Western World that I worked for through the years. I had come to work one morning to find boxes of negatives stacked to the ceiling in preparation for being hauled out to the dump. I was horrified knowing that either my grandfather, my uncle or I had taken most of those negatives. They were Bandon's history and I was determined to save them. So I hauled them box after box to my musty old basement, where they languished for 30 years until only a few years ago when Jim Proehl and I began scanning them into our computers. And these are the photos that are on display at Robin's building and that I share in my column each week.

If you want to read the story that columnist Steve Duin wrote about me a couple of years ago just Google "Mary Schamehorn by Steve Duin." It's a great read and tells the story lots better than I can.

They are just part of the huge collection of Bandon's history that I am leaving in my will to the Bandon History Museum.

It's great to read about Bandon's success on the basketball court this year, with the news that both the boys and the girls varsity teams won the 11th Annual Bandon Dunes Holiday Invitational Tournament, held last week in Bandon. It's not often that both the boys and the girls teams in a school share such success, but I know the Tiger fans love to see how well they are performing, and are looking forward to a great season.

How much coffee trivia do you know?