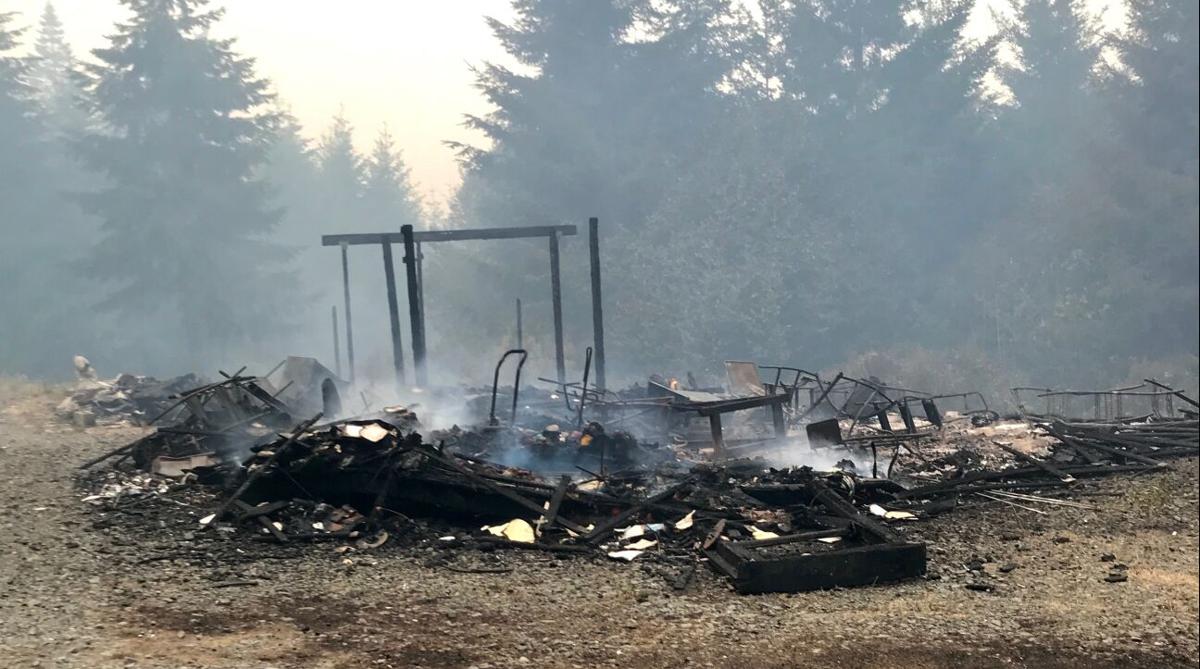 A yurt art studio owned by Candace Kreitlow and her husband Pete Bauer burned to the ground Tuesday in the North Bank Lane fire. 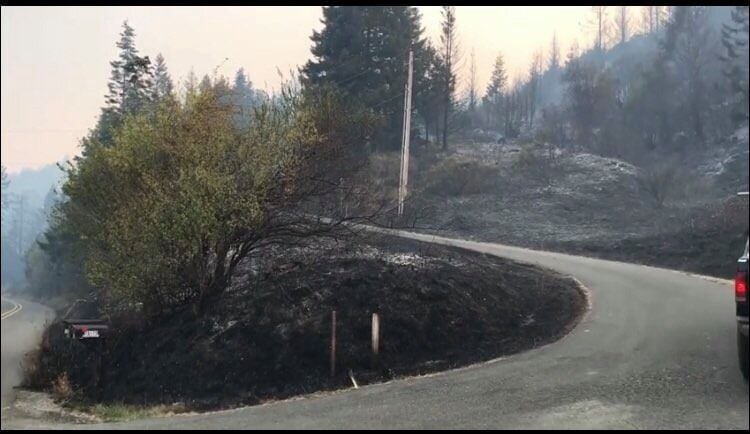 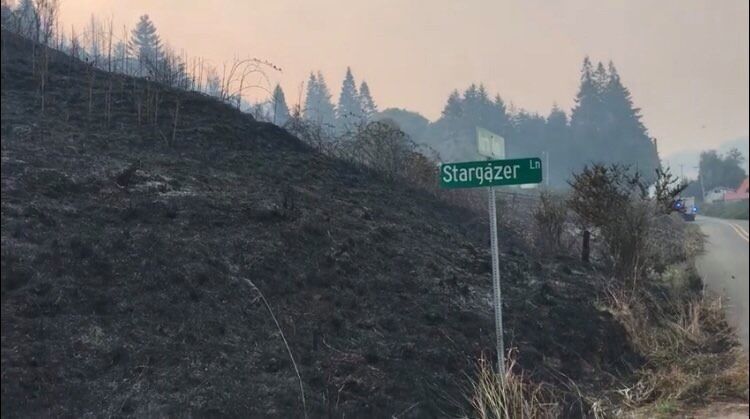 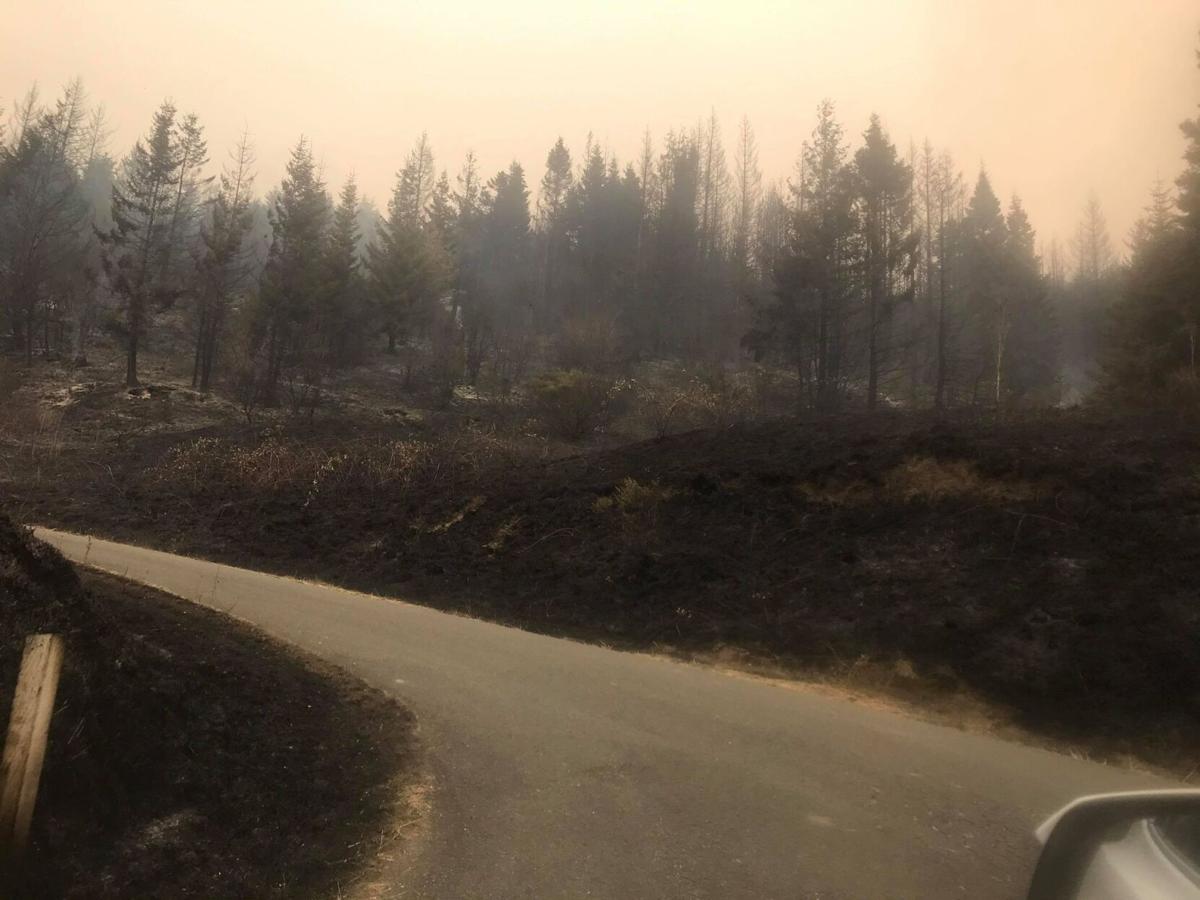 Stargazer Lane near the North Bank Lane fire on Wednesday. 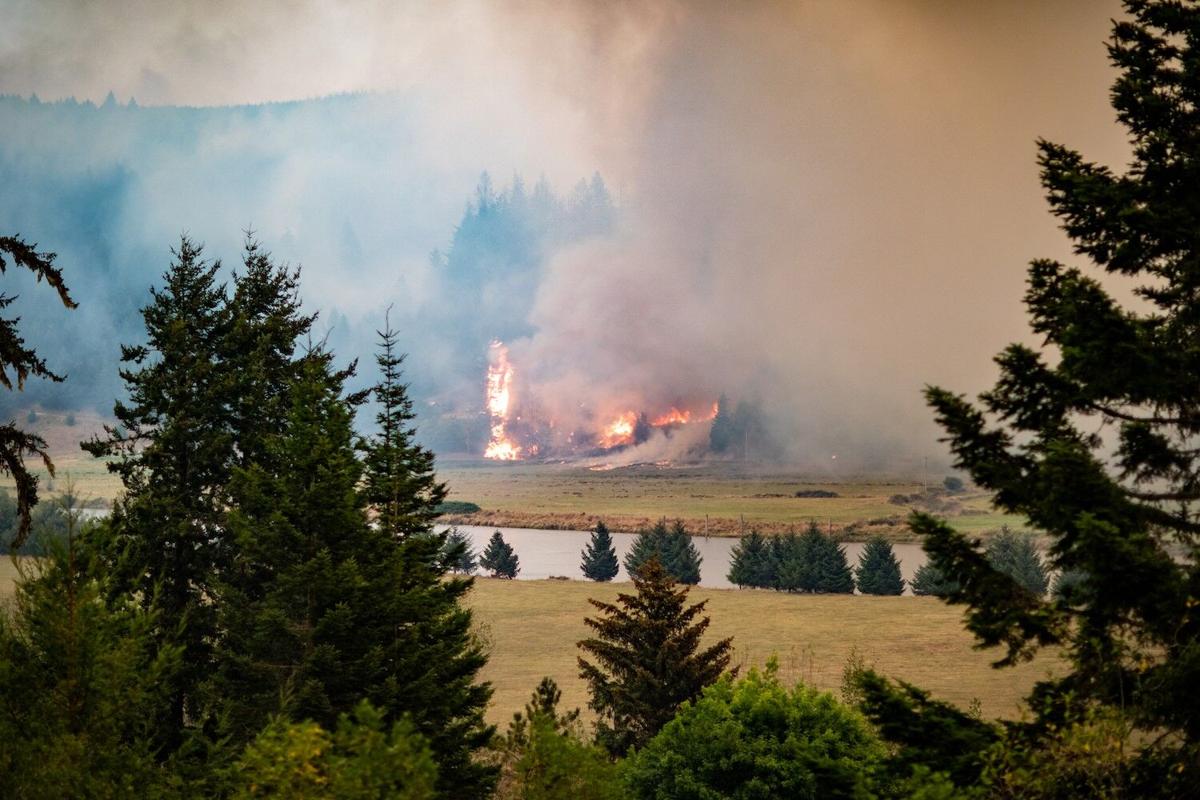 Robin Miller took this photo from his home on Highway 42S Tuesday afternoon showing the North Bank Lane fire on the other side of the Coquille River.

A yurt art studio owned by Candace Kreitlow and her husband Pete Bauer burned to the ground Tuesday in the North Bank Lane fire.

Stargazer Lane near the North Bank Lane fire on Wednesday.

Robin Miller took this photo from his home on Highway 42S Tuesday afternoon showing the North Bank Lane fire on the other side of the Coquille River.

BANDON — The North Bank Lane fire that started from a downed power line on Tuesday morning has burned approximately 350 acres and was 20% contained as of Wednesday afternoon, according Coos Forest Protective Association spokesperson Dominique Ray.

Lines have been cut around the fire and it has been burning within those lines with flare-ups throughout the day Wednesday.

"The fire stands at 350 acres, this may change as we get an opportunity to GPS the fire lines in the next several days," Robison wrote. "Just at shift change yesterday evening, the last trail was completed tight to the fire. With the trails complete, focus will be to mop the fire edge 50 feet in away from the fire lines."

Higher humidity, lower temperatures and no wind is allowing crews an opportunity to get the fire contained in the next several days, Robison added.

"Yesterday was the last shift for the Coos County Rural Fire Structure Group," Robison wrote. "Their assistance was greatly appreciated and if we need further help they will be with us within a moment’s notice."

The firefighting effort will continue over the next several days as crews work toward mop-up objectives. Some downsizing of resources has begun and Robison anticipates releasing the two helicopters today. They will be reassigned to other fires to help with the statewide effort that is taking place.

"Thanks to everyone that came together during this historic weather and fire event," Robison wrote. "I’m grateful for the effort and the passion that everyone has for keeping our district safe."

Meanwhile, most of the residents who either were told to leave or who self-evacuated have returned to their homes to find charred hillsides and, in one case, a completely destroyed studio inside a yurt.

"So far (our) house is OK," wrote Candace Kreitlow who with her husband Pete Bauer lives close to where the fire snaked down the hill, burning Bauer's woodworking studio where he made fine art pieces, along with equipment, many pieces of myrtlewood and Kreitlow's weaving loom, among other things.

"Studio is literally burnt toast," Kreitlow wrote. "Fire still threatening the house. ... Air is toxic, of course. But ... we are ok as are the kitties. Sooooo Thankful for good friends & neighbors & AMAZING Firefighters."

A barn and one other structure located in the fire zone also suffered damage, mostly to their roofs, but the rest of the homes in the area are still standing unscathed.

Ray said there are 162 firefighers working the fire, in addition to local agencies who have also responded, including Bandon Rural Fire Department and Coquille Fire & Rescue. Many other South Coast fire departments, along with local police and sheriff's deputies responded on Tuesday, but Wednesday, CFPA firefighters and contracted personnel were on scene.

The crews and equipment include five 20-person contracted crews, one 10-person crew from Shutter Creek Correctional Institution being managed by a crew boss from CFPA, two district hand crews, two CFPA bulldozers being operated by CFPA personnel, a type I helicopter (heavy weight), a type II helicopter (medium weight) and a type III helicopter manned with a CFPA employee.

"That (type III helicopter operator) flies air attack and gives coordinates to the aircraft on the fire and also provides ground resource information because they are above the fire," Ray explained.

There were no fixed-wing aircrafts on the fire Wednesday, though there was one on Tuesday dropping fire retardant as the fire was erupting.

"These are local companies that normally work in the timber industry and have agreements with us and can come and help when we have fires," Ray said.

"CFPA is actively suppressing the fire and structural departments are protecting the structures, coordinated with law enforcement," Ray said, adding that a local landowner has agreed to provide a field for contractors to camp in between day and night shifts.

Firefighters worked the fire throughout the night Tuesday and were expected to do the same Wednesday and beyond, depending on the fire's status.

"It's all weather dependent," Ray said. "If the weather changes for the better, it will help progress. If it continues to be bad, it will slow progress."

Wednesday morning the weather remained oddly warm for the South Coast, but the wind had calmed down overnight. Throughout the day, heavy smoke lingered in the area from Coos Bay south to Langlois and Port Orford, still being pushed by east winds. A marine layer slowly creeped in later in the day and by evening temperatures were down from the low 90s and high 80s to the low 60s. Rain is predicted for Monday and Tuesday.

One helicopter was rerouted from the North Bank Lane fire in the early afternoon when a fire broke out at Tugman State Park just off U.S. Highway 101 just north of Lakeside. Ray said local fire departments also responded and along with the helicopter, CFPA personnel and a Shutter Creek crew were able to contain that fire at about one-half acre.

"They stopped it quickly and mopped it up," Ray said. No other fires are burning in the South Coast CFPA district, she added.

Mike and Susan Deets own a home built by Mike on Stargazer Lane, which was the one street where residents were ordered to evacuate.

Susan Deets wrote in a message, "Not one foot of our property or house was burned or damaged." She said neighbors Burr and Bobbie Gibbons' house was fine, too.

"Firefighters brought up a cat and built a fire break between Burr's south where a few fires were trying to get going," Deets wrote. "Pretty much the entire (95%) of our mile long asphalt driveway was burnt on both sides. It’s horrible. Looks like a war zone."

Bandon Fire Chief Lanny Boston was on scene both Tuesday and Wednesday. Wednesday afternoon Boston said there were still active flames within the control lines.

"We'll increase the lines today and will stay on hot spots near homes in the area," Boston said. "A lot will depend on what Mother Nature does. We managed to handle it thanks to our neighbors. Weather will be the factor."

Boston and Bandon Police Chief Bob Webb said Bandon Dunes Golf Resort suffered a small balcony fire outside one of the resort's restaurants but managed to get it out before Bandon Fire arrived. It was not clear what caused that fire.

Bandon Dunes General Manager Don Crowe said Thursday morning there was a "smolder with a little smoke" on one of the decks on the main lodge at the resort.

"Our maintenance staff jumped up and used a fire extinguisher to put that out," Crowe said. "Rather uneventful compared to the bigger picture of what's going on in the area."

Crowe said Bandon Fire responded and by that time, BDGR maintenance staff had already taken the boards off the deck and the fire department checked it for any evidence of fire, giving staff the "green light."

Webb said if city of Bandon residents need to be evacuated due to a fire or other emergency, the city will utilize its tsunami warning sirens to alert the public.

Boston also said the North Bank Lane fire never jumped the Coquille River, but that crews were watching on the Highway 42S side to make sure.

"People need to be vigilant," Boston said. "If they see embers (from the North Bank Lane fire), they need to go out and feel it to see if it's cold or warm and do what they need to do if it's warm. If (the fire) jumps the river, we have a real problem."

Boston said with most agencies tapped out due to the large number of fires burning in Oregon, Washington and California, firefighting resources are in short supply.

"People need to wake up and be responsible. The public needs to help us out," Boston said. "We have enough for one call. Firefighters are not available right now. Yesterday we were lucky and a lot of good work went on."