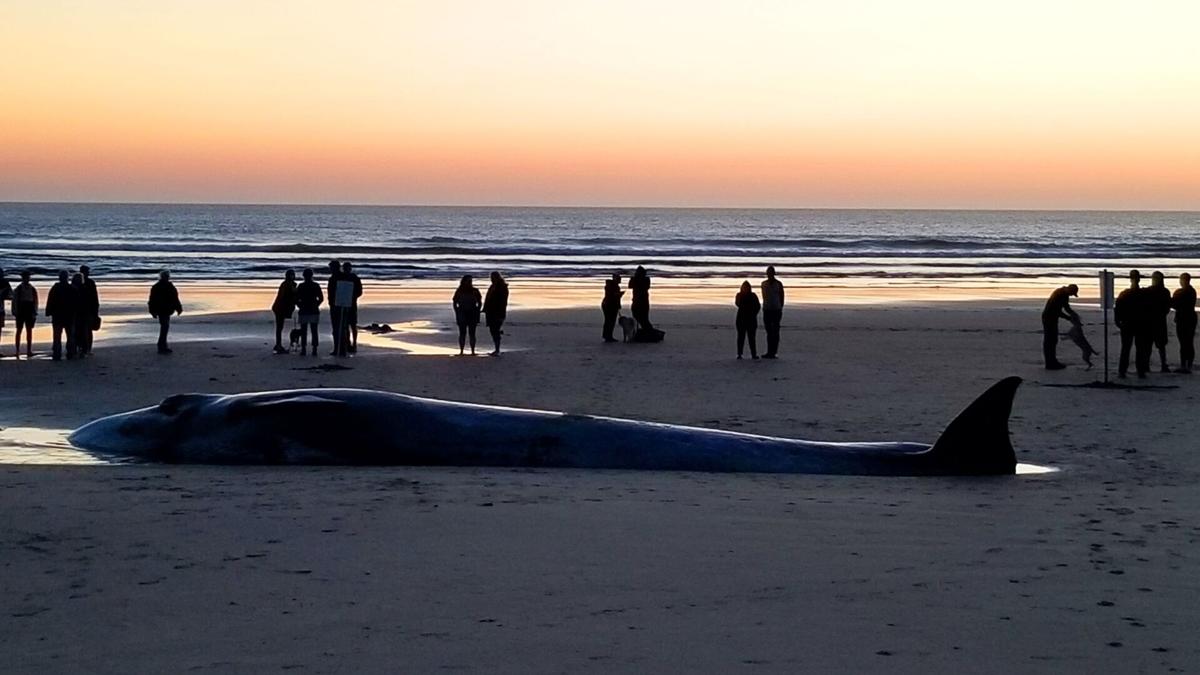 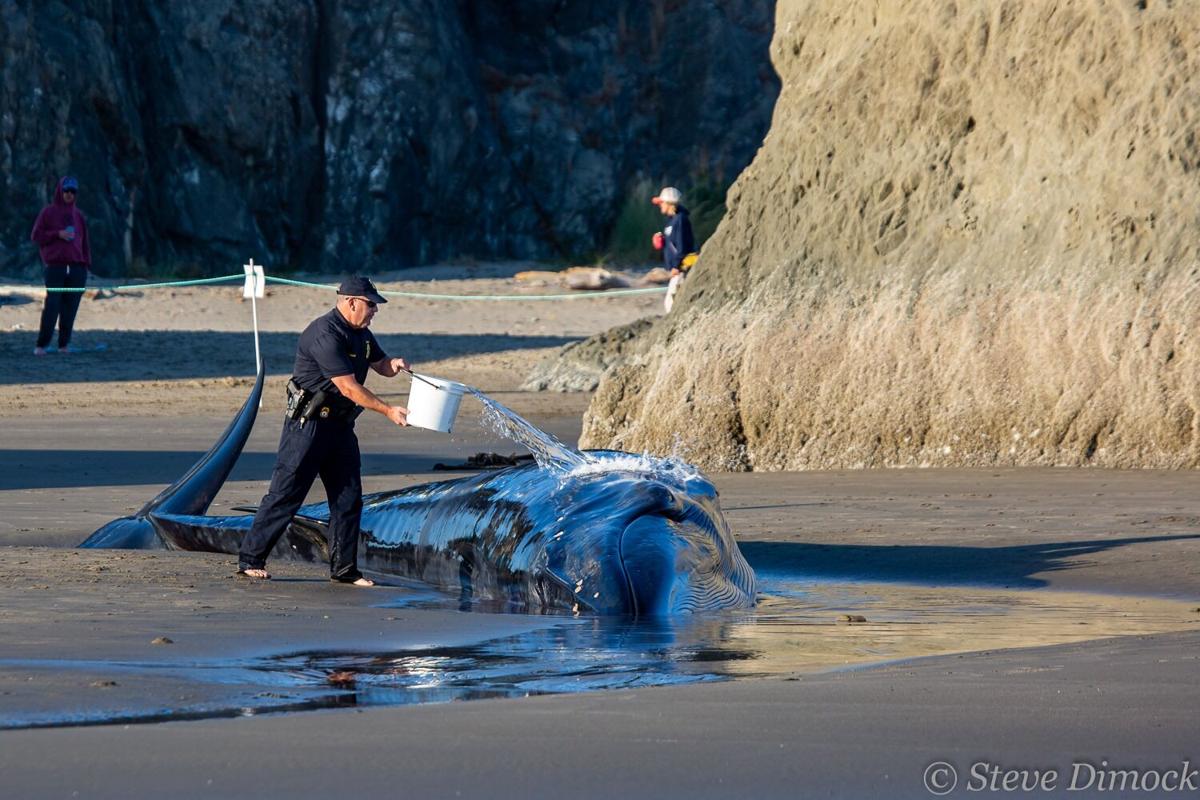 Local photographer Steve Dimock captured this image of an Oregon State Police officer throwing water on a beached sei whale Saturday afternoon as officers and wildlife officials tried to save its life and make it more comfortable. The whale died later that evening. 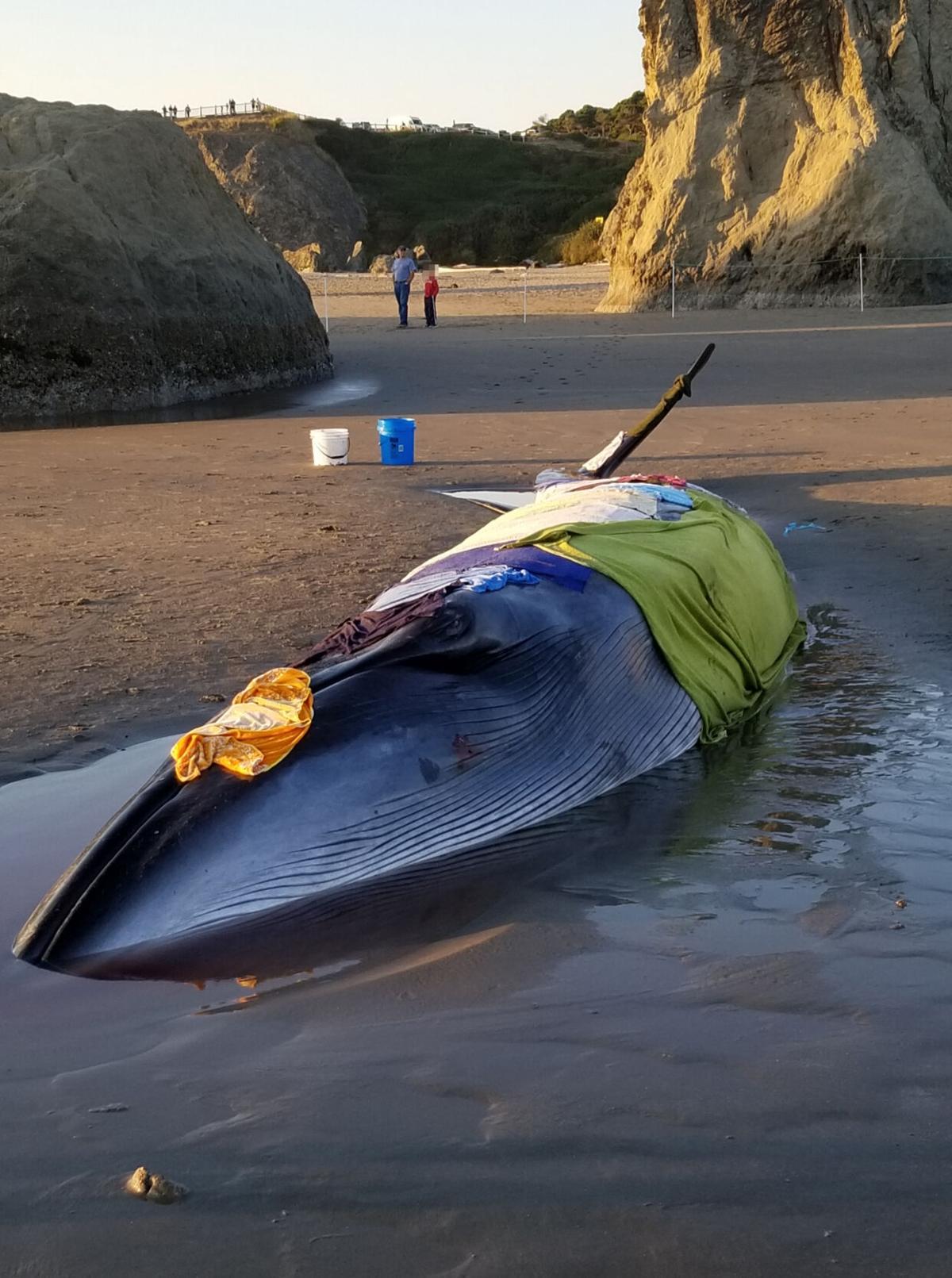 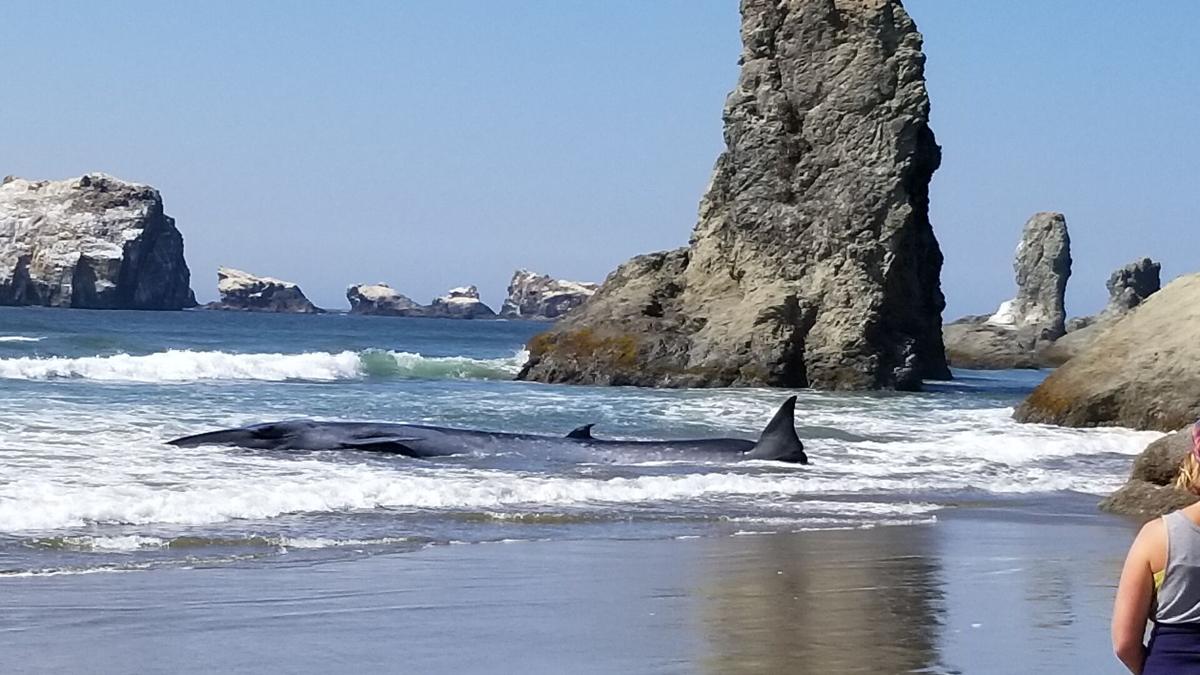 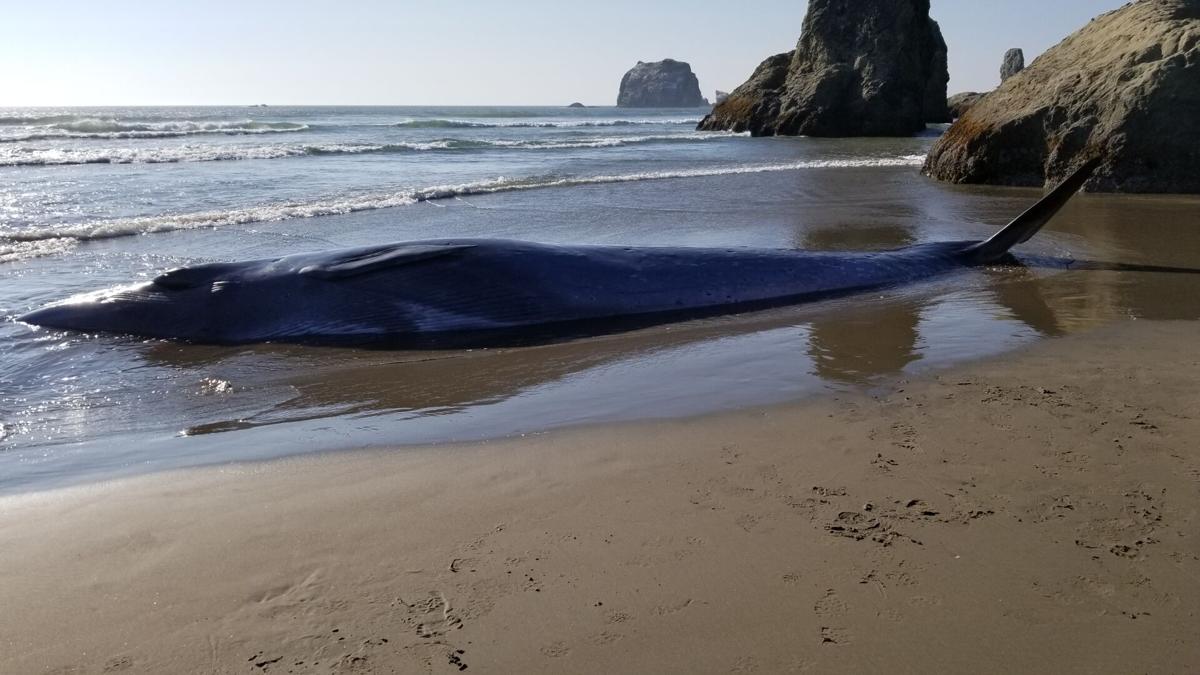 Local photographer Steve Dimock captured this image of an Oregon State Police officer throwing water on a beached sei whale Saturday afternoon as officers and wildlife officials tried to save its life and make it more comfortable. The whale died later that evening.

BANDON — What has been tentatively identified as a 38-foot sei whale became stranded on the Oregon coast just south of Face Rock viewpoint in Bandon Saturday afternoon, Sept. 5.

While alive when it first came ashore, the sei whale was stranded by the tide and died Saturday evening, stated the press release. Based on its size, it was a subadult male, meaning it was not yet fully-mature. The necropsy was performed Sunday, Sept. 6, by Oregon State University, World Vets, and Sealife Response, Rehabilitation and Research. The necropsy allowed marine mammal biologists to collect samples to try to determine what may have caused the animal to strand.

The carcass will be buried on the beach shortly thereafter. It is against federal law to take pieces from a whale carcass.

The whale drew dozens of onlookers to the beach. OPRD roped off the whale so people wouldn't disturb it. Sunday morning, officials brought in heavy machinery with plans to bury the whale after the necropsy. The official report indicated the whale died from a lung infection.

"(It was) a sad day at the beach yesterday," wrote local photographer Steve Dimock, who posted several photos on social media.

"I have come across a beached whale on a couple of occasions," Dimock wrote. "This was the first time I have watched as it gasped for breath. A difficult thing to see and watch."

Dimock said officials on scene were providing relief as best they could for the mammal, dumping ocean water on it and covering it with soaked blankets to keep it cool and wet.

"I am afraid it was too badly injured and they were simply trying to keep it as comfortable as they could ...."

Sei whales have not been seen on Oregon's beaches since the 1950s. Sei whales occur in subtropical, temperate and subpolar waters around the world, according to the NOAA Fisheries website. Often found with pollock in Norway, the name "sei" comes from the Norwegian word for pollock, "seje."

The sei whale population has been greatly decreased by commercial whaling. During the 19th and 20th centuries, sei whales were targeted and greatly depleted by commercial hunting and whaling, with an estimated 300,000 animals killed for their meat and oil.

Commercial whaling ended for this species in 1980. Although whaling is no longer a major threat to this species, some scientific whaling continues today in Iceland and Japan. Vessel strikes and entanglement pose the biggest threat to sei whales today. The sei whale is listed as endangered under the Endangered Species Act and depleted under the Marine Mammal Protection Act.

NOAA Fisheries and its partners are dedicated to conserving and rebuilding the sei whale population. They use a variety of innovative techniques to study, protect and rescue these endangered whales. They engage their partners as they develop regulations and management plans that foster healthy fisheries and reduce the risk of entanglements, create whale-safe shipping practices and reduce ocean noise.

Status: Today, there are around 8,600 sei whales in the North Pacific. This is only little more than 20 percent of the original population estimate of 42,000 for this area.

The total population of sei whales in all U.S. waters is unknown.

More information about sei whales is available online at https://www.fisheries.noaa.gov/species/sei-whale.