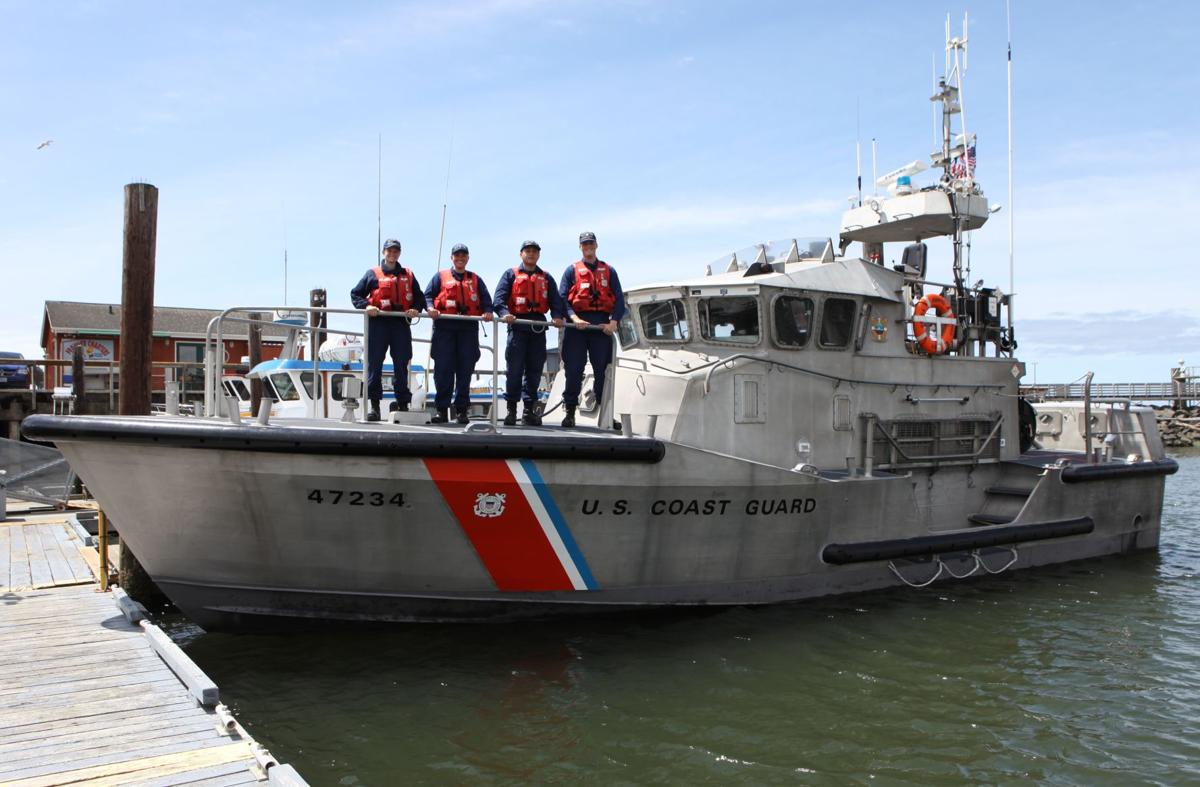 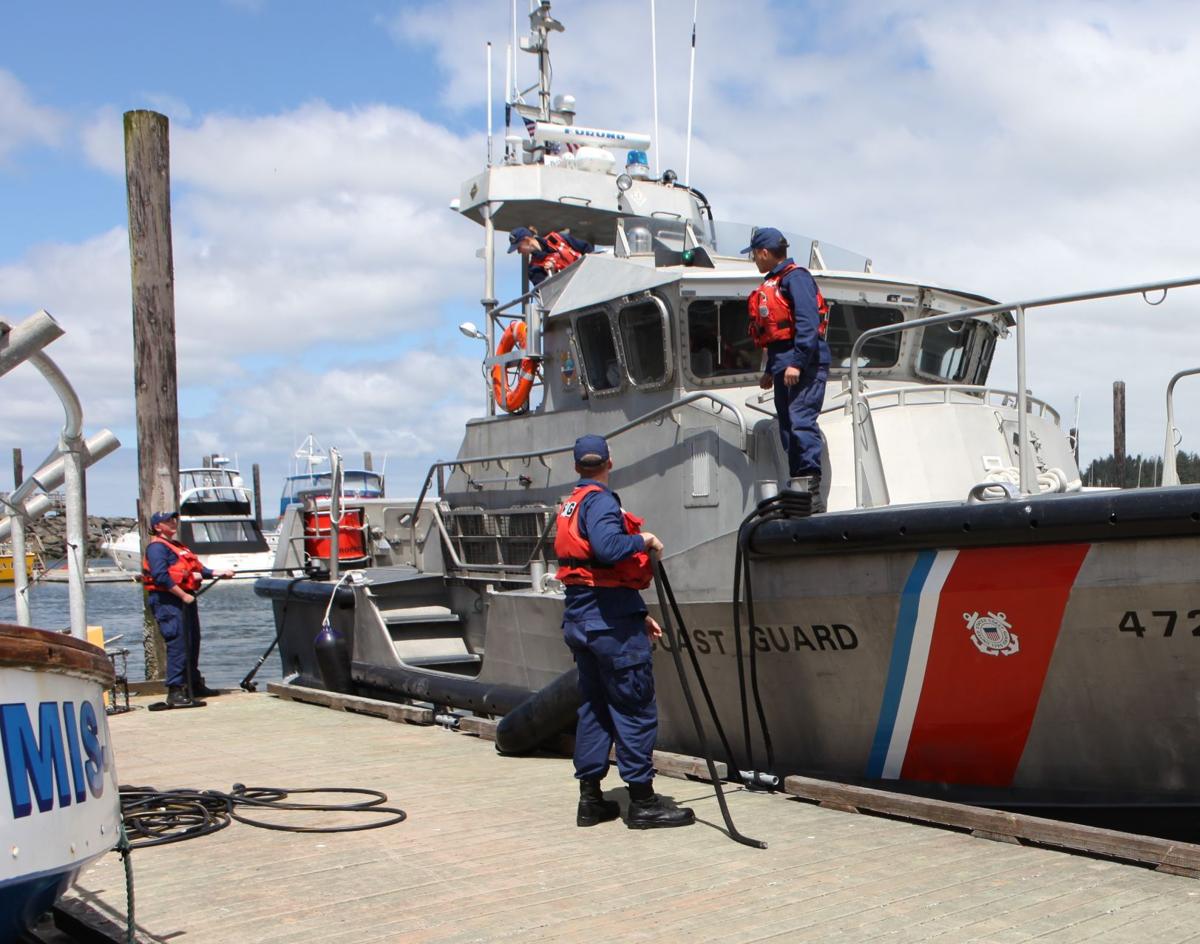 U.S. Coast Guard members, Coquille River Patrol, tie up the 47-foot motor lifeboat after moving it from an outer dock in the Bandon marina. 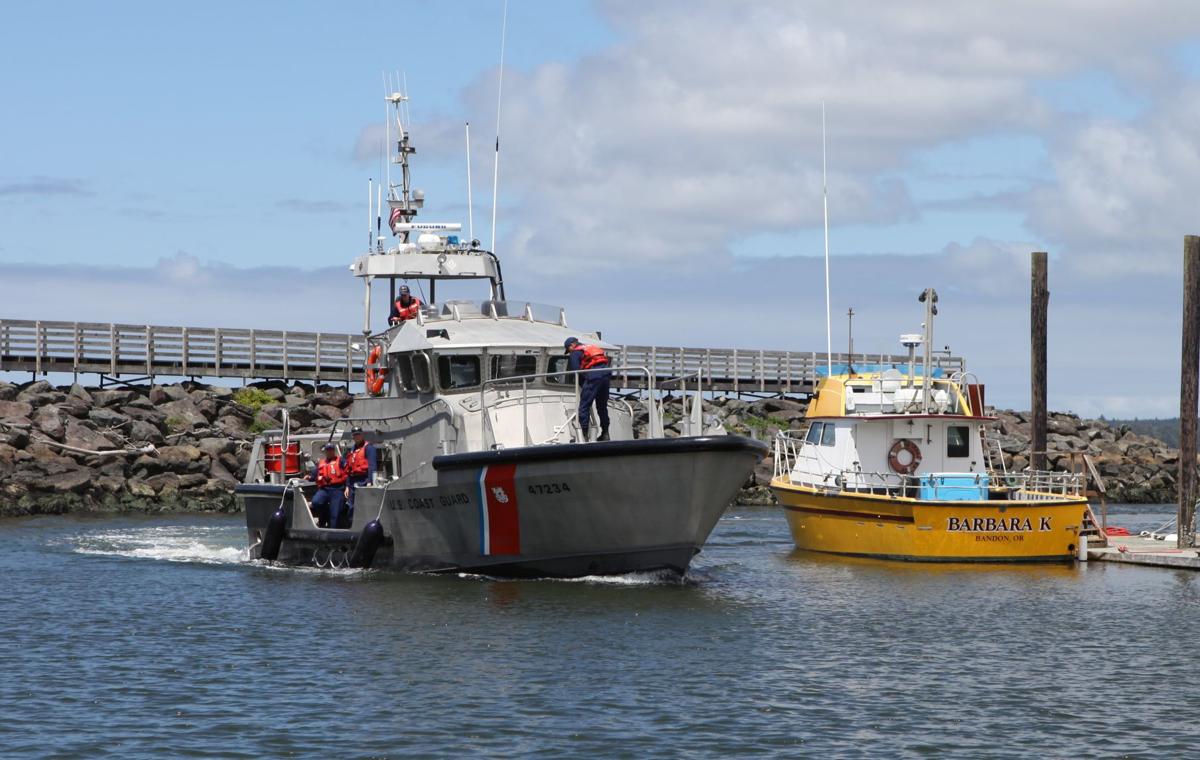 Members of the U.S. Coast Guard, Coquille River Patrol, move the 47-foot lifeboat from an outer dock in the Bandon marina. 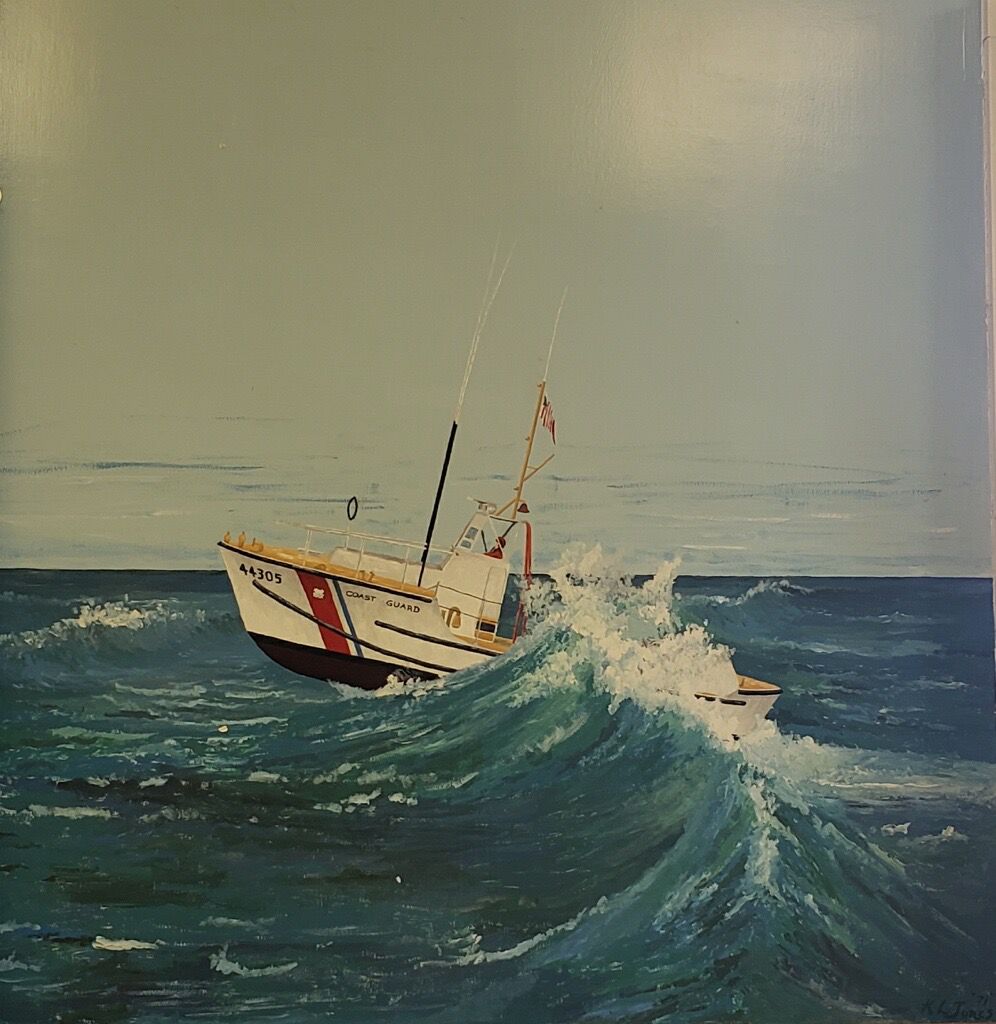 U.S. Coast Guard members, Coquille River Patrol, tie up the 47-foot motor lifeboat after moving it from an outer dock in the Bandon marina.

Members of the U.S. Coast Guard, Coquille River Patrol, move the 47-foot lifeboat from an outer dock in the Bandon marina.

BANDON — The U.S. Coast Guard is back for the summer with a 47-foot motor lifeboat and new quarters in an historic building.

A crew of eight Coast Guard members will rotate throughout the season with four members on during weekends from Thursday through Sunday, providing 24-hour coverage of the Coquille River during the busy fishing season, both sport and commercial. The boat arrived later than its usual Memorial Day appearance this year, but will be stationed here on weekends through Labor Day or later, if boat traffic warrants it, said Boat Operator and Boatswain's Mate 2nd Class Rachel LaFevre, acting Officer of the Day on Saturday.

"If traffic increases, we'll be down more," LaFevre said. "We're evaluating how much boat traffic is here on weekends and all I've seen this weekend is a few crabbers, though I'm sure that will increase as tourism picks up."

LaFevre has spent the last five summers with the Coquille River Patrol, providing Coast Guard coverage. This is her last year here, as she will soon be transferred to the Brookings patrol. Originally from Astoria, LaFevre has been in the Coast Guard for 11 years. She said she is happy to be close to home and especially likes the South Coast area.

Instead, the crew is back in the former Coast Guard building at 390 First St. SW, leasing three spaces — two upstairs for sleeping quarters and the space downstairs at the west end of the building, formerly leased for many years by Syd Wiesel, LCSW. That space, which includes a small kitchen, is being used as the common area.

On the walls of that room, LaFevre said there are large painted murals depicting Coast Guard boats crossing Bandon's sometimes treacherous bar, signed by K.L. Jones. One depicts a 44-foot motor lifeboat and the other shows a 36-foot motor lifeboat. Those boats were replaced in the late 1980s and early 1990s by the 47-foot motor lifeboats used today.

Josh Adamson, project manager for the Port of Bandon, said the Coast Guard is leasing the space from the Port under a one-year license until they decide whether they want a longer-term lease.

LaFevre said "it's pretty cool" living in the building where former Coast Guard members lived that was built in 1939 after the Bandon Fire of 1936 leveled much of that area of what is now Old Town. The building was located adjacent to the Coquille River for the specific purpose of housing the Coast Guard. It has three stories plus a lower shop area. On the river side is a dock, now rotted and unsafe, that was once used as a fueling dock, and a ways — a boat launching and hauling area.

Boat builders such as Joe Bolduc built two paddlewheelers in the 1980s that had their maiden launch from the Coast Guard dock.

The Port obtained the shuttered and decommissioned building from the federal government in the early 1980s, in a trade for land the Port owned on the north side of Moore Mill. The U.S. Fish & Wildlife Service was interested in owning the land to expand the Bandon Marsh National Wildlife Refuge, which was officially established in 1983. The Port refurbished the building to make it livable again.

The bottom floors of the building have since been used as the Port's shop area, while the upstairs rooms have been leased to various tenants, including at one time the Bandon Historical Society Museum. The upstairs main apartment — the commanding officer's quarters — was later used to house the Port manager and his family, then the harbormaster and his family. That space is now used as the Port's offices.

People may have noticed the Coast Guard crew clearing the area across from the building that used to be a stairway, which was used by crew members to access the top of the hill to observe the bar and river. LaFevre said they are clearing the area and cleaning up the concrete block and will paint it and "make it look nice."

"It's pretty rough, though," LaFevre said, stressing that the path is not open to the public.

On Sundays, the crew moves the boat back to Charleston, which takes about 30 minutes, though they may extend its weekend stay in the Bandon marina if boat traffic increases.

"We'll reevaluate (each weekend) and we might stay longer," LaFevre said.

Meanwhile, if the boat is in the marina, the crew is here, she said. And she reminds the public not to be concerned if they hear the boat and a Coast Guard helicopter from Sector North Bend doing training exercises, even in the late evening when it's almost dark.

"If we're lowering a basket up and down, it's definitely training," she said.

Those who need to contact the Coast Guard for bar conditions or other reasons can call the line they've had for many years — 541-347-2038 — it's been transferred down to the Coast Guard building. Leave a message and a crew member will return the call, or call the Coos Bay Coast Guard Station at 541-888-3267.