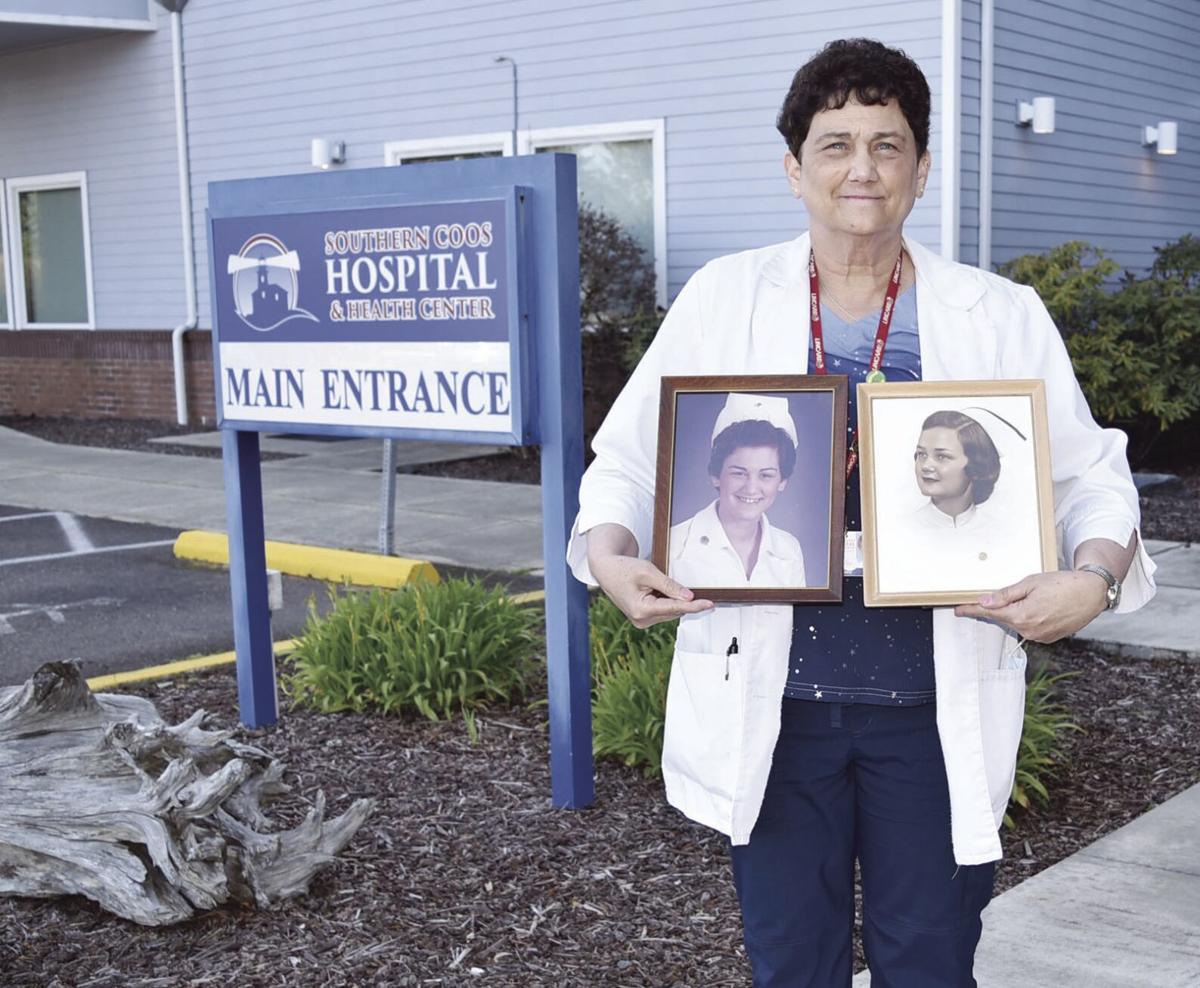 Registered Nurse Debbie Allen is retiring from Southern Coos Hospital & Health Center after 41 years. Here, she holds nursing school graduation photos of herself and her mother,  Jeanette Denison, who inspired her to pursue her career. 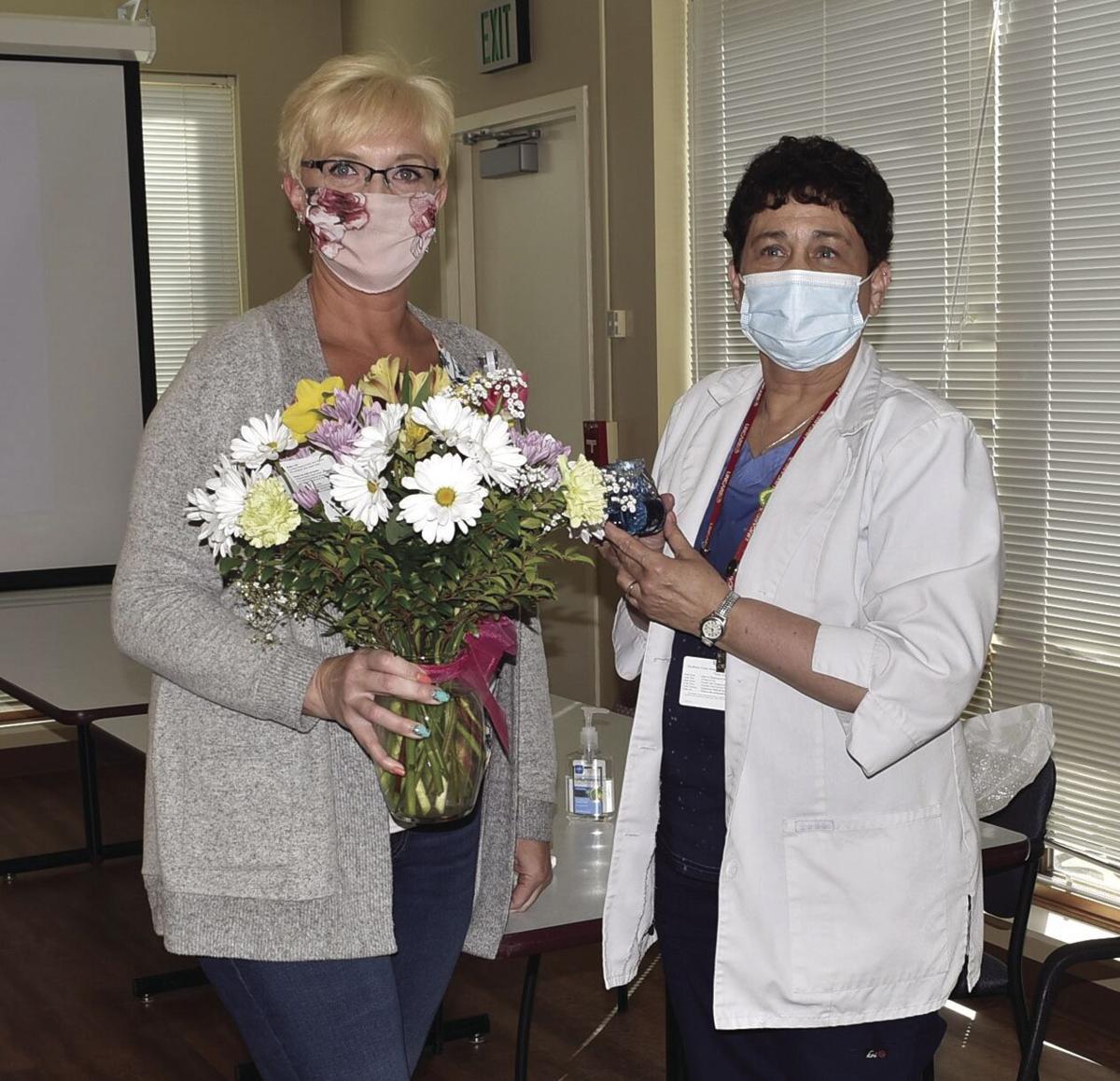 SCHHC RN Debbie Allen, right, receives flowers and a gift on behalf of the staff from Chief Nursing Officer Cori Valet during a daily staff meeting at the hospital.

Registered Nurse Debbie Allen is retiring from Southern Coos Hospital & Health Center after 41 years. Here, she holds nursing school graduation photos of herself and her mother,  Jeanette Denison, who inspired her to pursue her career.

SCHHC RN Debbie Allen, right, receives flowers and a gift on behalf of the staff from Chief Nursing Officer Cori Valet during a daily staff meeting at the hospital.

BANDON - When Debbie Allen graduated from nursing school in Montana, she wasn’t sure where her new career would take her, but she knew it was something she’d wanted to do since she was in seventh grade.

After all, her mother set the example.

“I grew up in a small farming community near Missoula and my mom worked as a nurse at a small hospital there. I got to work with her sometimes,” Allen said.

In high school, Allen focused her studies on what she’d need to get into nursing school, including college-level courses. After high school, the rigorous three-year program at a private nursing school had students working from day one while also completing their studies. Of the 75 people in her class, 42 successfully graduated.

Allen received her nursing degree in 1977 when she was 21. With her college roommate, she moved to the southern Oregon coast to work at Bay Area Hospital. She worked there for one year, then at the former Coquille Clinic in Coquille before taking a job in Bandon at Southern Coos Hospital on Sept. 1, 1979.

She has worked “just about every nursing job” over the years, including in the pharmacy, as an employee health nurse, in discharge planning, as a swing bed coordinator, in cataract recovery, as a charge nurse in the Emergency Room, as a floor nurse and as a nurse manager.

Her final assignment at Southern Coos was in the hospital’s pharmacy.

Allen started at the hospital in its former location and moved to the new campus when it was built in 1999. She worked under Edie Beckner, director of nursing for the hospital for 17 years. Allen is among only a few employees left who have served the district in both locations.

Nursing has changed over the years, but the biggest change has been the implementation of computers and, more recently, electronic health record systems, Allen recalled.

“When I was growing up, we didn’t have computers,” she said. “We took computer classes at Bandon High School to learn how to use them at work.”

So many things are now monitored electronically in health care. Allen remembers when nurses had to count the drips on an IV pump to make sure a patient was getting the accurate amount of fluid.

“We all got very good at it, believe me,” she said.

In the pharmacy, nurses used to have to mix medications under the guidance of a consulting pharmacist. Now, they are mostly purchased pre-mixed from an off-site pharmacy. She always enjoyed working in the pharmacy, learning the different medications and how they interact.

A few years ago, her department implemented a Pyxis machine – an automated medication dispensing system – that helps clinicians dispense the right medications, for the right patients at the right time.

Allen also spearheaded the SCHHC drive-through flu shot clinics for the past 16 years.

While giving to the community as an RN, Allen also devoted time to her family, including Tony, her husband of 42 years, who worked for many years as a truck driver for Bandon Concrete, and her two children, Michael, 38, and Megan, 33, who were both adopted from Calcutta, India, as infants.

Michael is now a mechanic in Albany and Megan lives in Wilsonville, where she works with adults facing mental health challenges.

In retirement, Allen hopes to travel with Tony, now also retired, to visit family. She also has many projects at home she’d like to complete, such as organizing boxes of photos and creating scrapbooks.

“I know (retirement) will be bittersweet,” she said. “My last day will probably be full of tears and Kleenex. It’s going to be nice to be at home and decompress but I’m sure it will take time to get into that retirement mode.”

Allen said she will miss the camaraderie of the hospital staff – people who have been there to vent to and cry with. She’s enjoyed meeting new people and training new nurses over the years.

But taking care of patients is what she will remember most.

“That’s why I got into nursing in the first place,” she said.