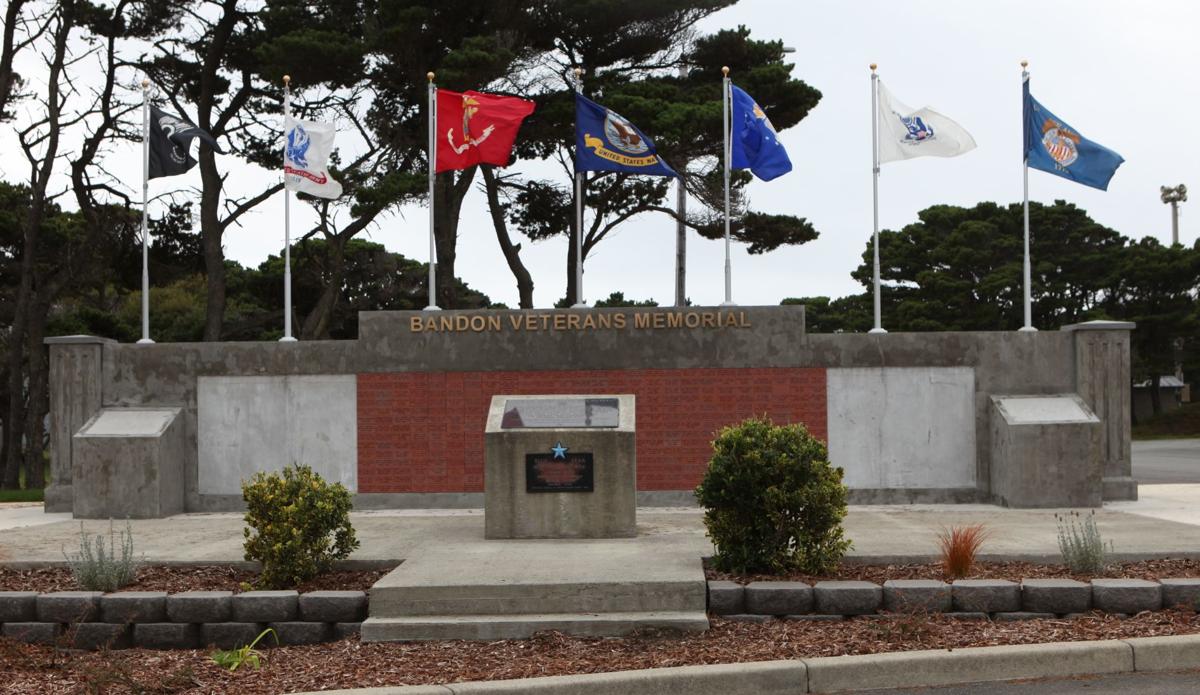 The new Bandon Veterans Memorial — before the flags were stolen over the weekend. 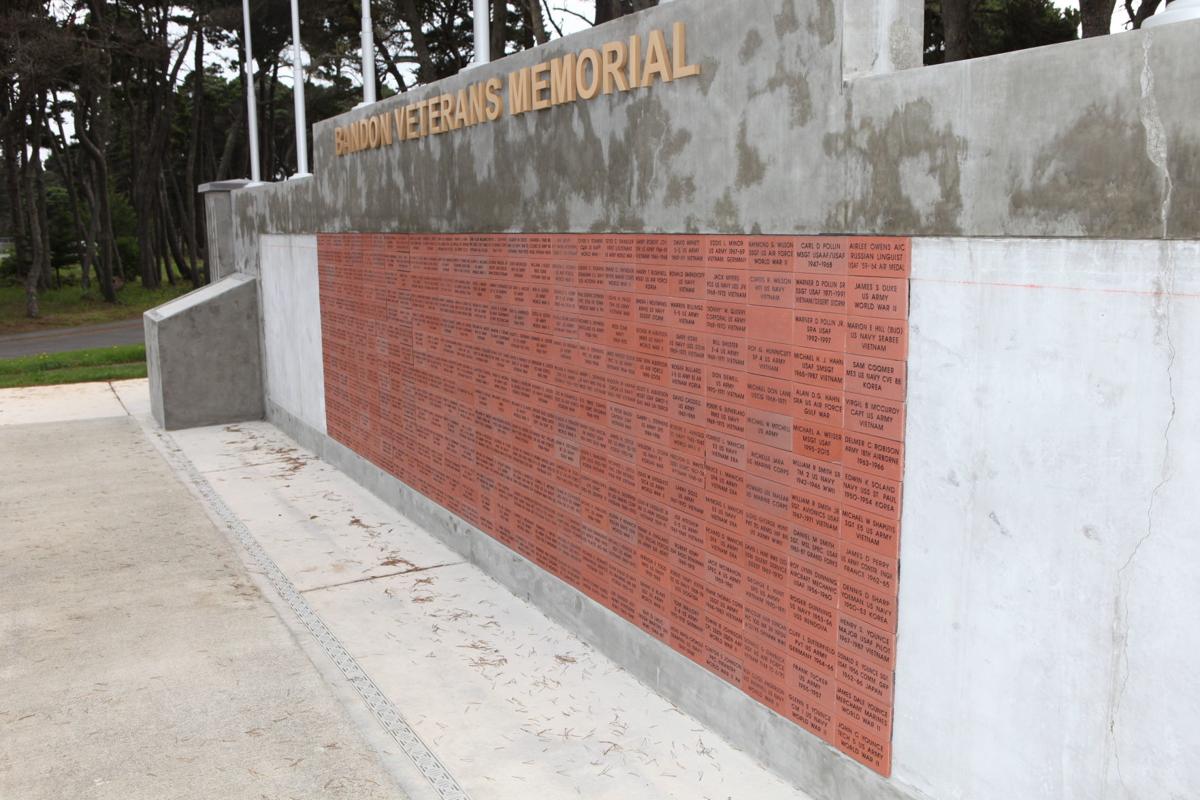 The new Bandon Veterans Memorial will be dedicated at 11 a.m. Monday, Nov. 11. 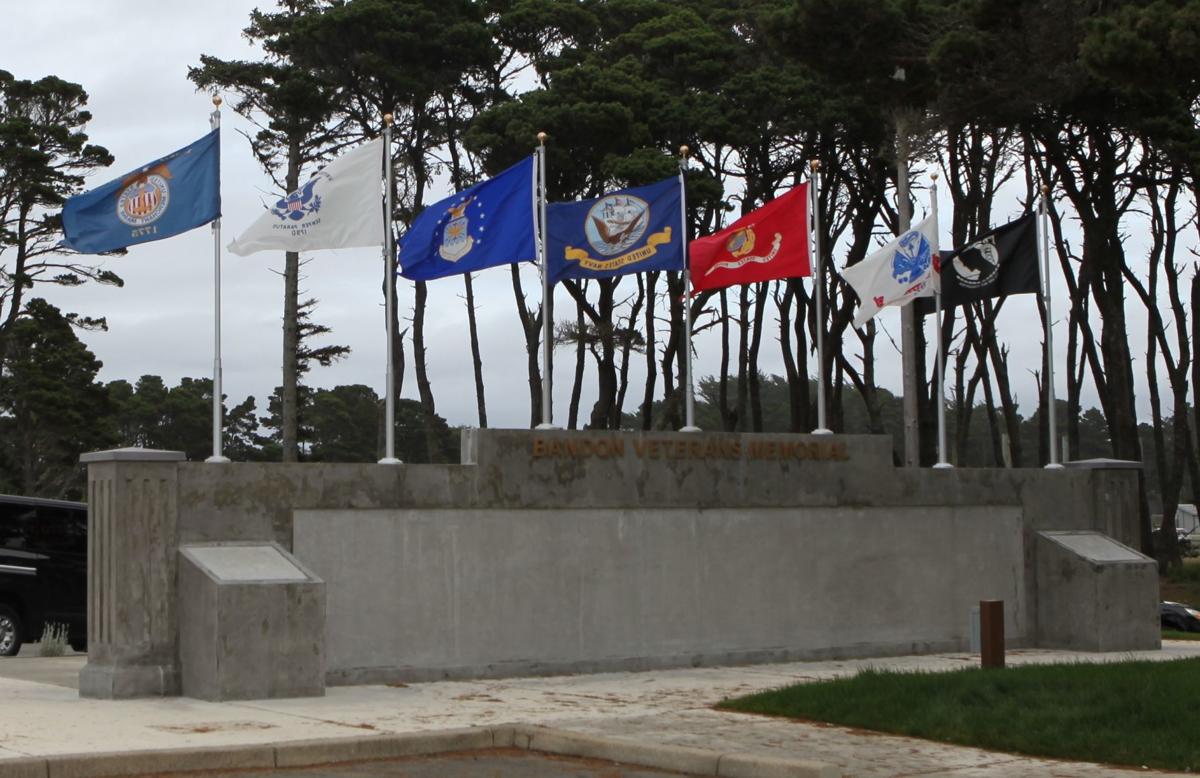 The rear side of the new Bandon Veterans Memorial, where there is space for more personalized bricks.

BANDON — The flags at the new Bandon Veterans Memorial have been stolen.

The theft happened days before the memorial’s dedication at Bandon City Park, which is still scheduled for Monday, Nov. 11.

“It is disrespectful,” said Bill Smith, chairman of the Veterans Memorial Committee. “We have no idea why, when or who but are rushing to get replacement flags to carry on with our dedication.”

The new Bandon Veterans Memorial will be dedicated at 11 a.m. Monday, Nov. 11.

According to Smith, the flags disappeared sometime Saturday night, Nov. 2. There were seven of them, five representing each branch of the military, one Missing in Action/Prisoner of War flag and one Merchant Marine flag.

“The memorial is on the same site where the Lions Club established a memorial for the U.S. Coast Guard and the U.S. Army during WWII,” Smith said. “We had decided to expand that to include all veterans … Our committee had a three-year project thinking it would be an appropriate place to honor all veterans and expanded the site.”

The seven flags were three-feet by five-feet and will cost anywhere from $40 to $60 each to replace, depending on the type of flag the committee would purchase.

“We want double-sided flags,” Smith said. “We’ve had one person offer to make a replacement and we have a maintenance fund for the site. We will discuss it with this person who made the generous offer so cost won’t be a real problem, we just need to locate the ones we need in time for Veterans Day.”

An unnamed Bandon business has also offered to help put in security cameras at the memorial in case this happens again or if any other crimes are committed in the future.

“It’s hard to say what people’s motives are,” Smith said. “I would tell whoever took the flags to just return them, no questions asked. It’s hurt the veterans I’ve talked to that someone would do this. It could have been a disgruntled veteran, a kid pulling a prank, I don’t know. I don’t think this will be the last we see of something like this around the country, either.”

The rear side of the new Bandon Veterans Memorial, where there is space for more personalized bricks.

Smith added that since the flags were taken, he’s been scared of going out to the memorial because he isn’t sure what he will find.

“I’m scared of going out there and maybe seeing the wall painted over or damaged,” he said. “I hate to say that, but those are the thoughts I have. It’s a sad deal.”

To make a donation toward buying new flags or increased security at the memorial, call Smith at 541-347-3674 or email him at carbil2000@gmail.com.

When Howard Hoffer returned from serving in Vietnam, he, like many other veterans, received a less-than-enthusiastic welcome.