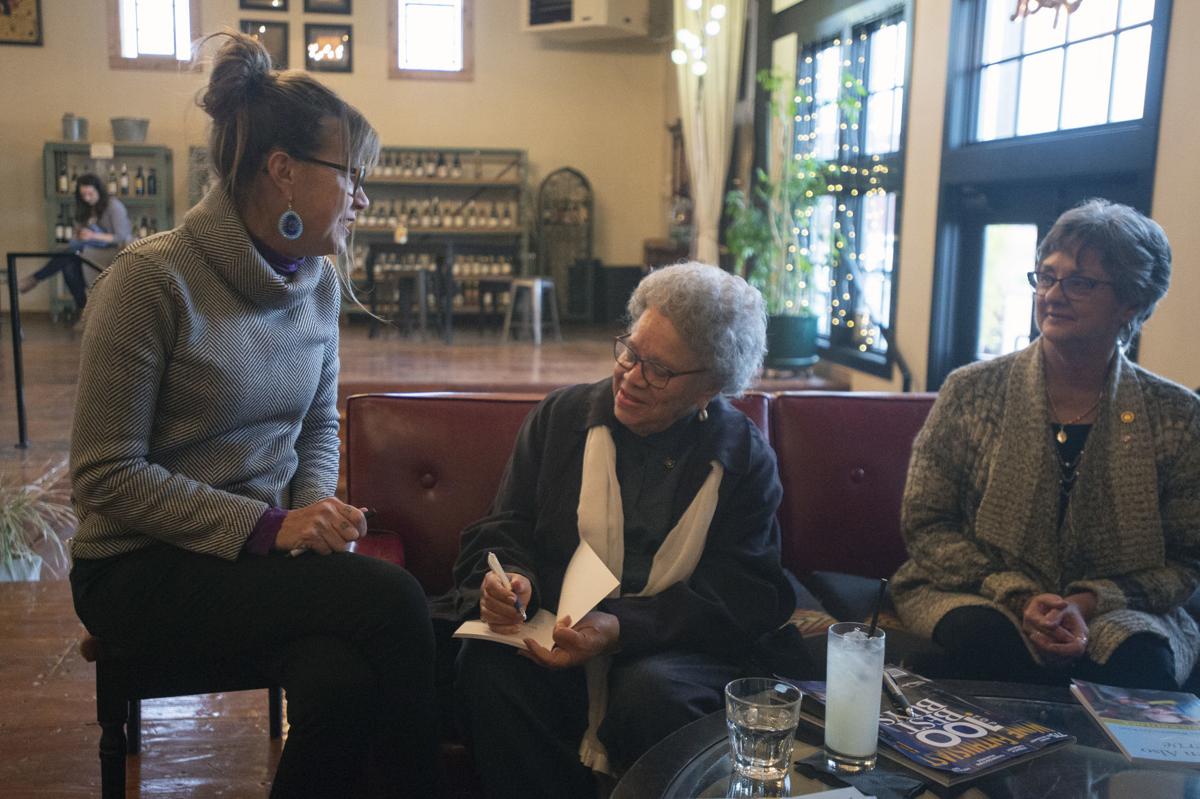 Dr. Sylvia Whitlock, center, the first female to become a Rotary Club president, signs one of her books Tuesday for DeDee Peterson, owner of Front Street Provisioners, at the restaurant in Coos Bay. 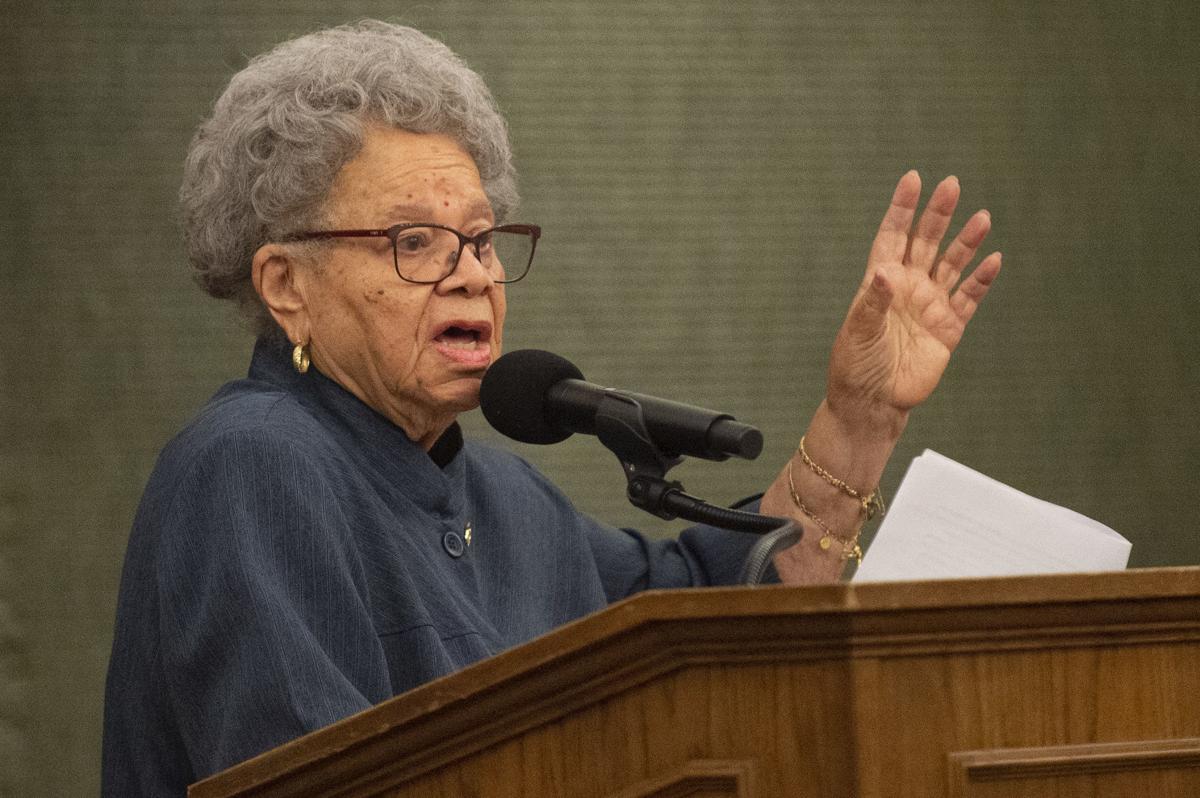 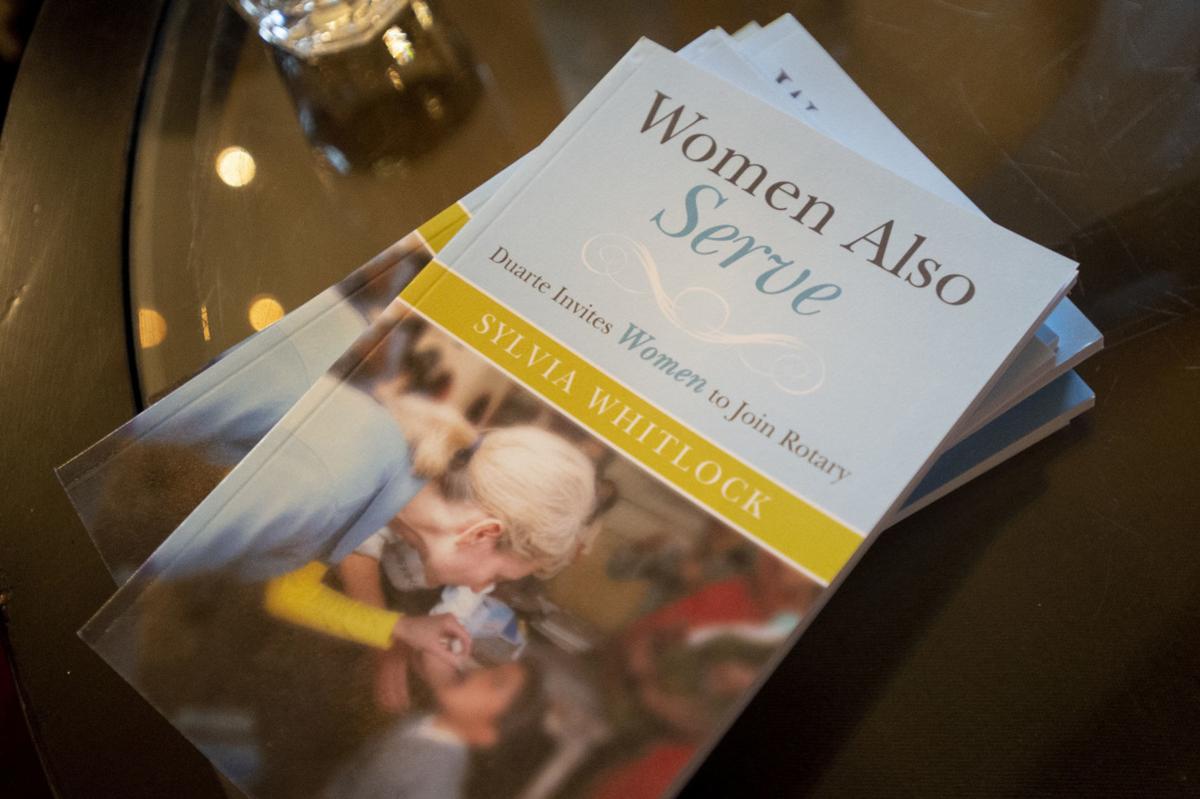 COOS COUNTY — An advocate, a trailblazer and a humanitarian — these are just a few words people used to describe Dr. Sylvia Whitlock, the first female Rotary Club president, at a presentation hosted by the Coos Bay-North Bend Rotary Club Tuesday at The Mill-Casino Hotel & RV Park.

Dr. Whitlock, who shared her experiences with the Rotary club through her speech titled “Edge of Tomorrow,” awed attendees as she recounted how she first joined Rotary in 1982 which was during a time when women were excluded as members.

With an invitation from then Duarte Rotary Club president Richard Key, Dr. Whitlock said she along with four other women joined the club and continued on its mission of serving others and promoting peace through its various service projects and initiatives.

Dr. Whitlock told attendees Tuesday that she remembers submitting her paperwork using only her first initial and last name, which she was advised to do, as Rotary did not admit women as members.

With the support of the “forward-thinking” men in the club like Key, Dr. Whitlock said she and other women continued on working alongside their male counterparts even after their charter was revoked.

The renamed “EX-Rotary Club of Duarte continued meeting and performing various charitable work around California for 11 years. It wasn’t until 1987, after losing in the California Supreme court, when the U.S. Supreme Court ruled that Rotary clubs may not exclude women from membership on the basis of gender that the club regained its charter.

Giving much credit to Key and the other men involved with her inclusion into the club, Dr. Whitlock said she’s still fascinated with how much people today resonate with her story.

“I’m fascinated that people are still fascinated by this story,” she said. “We didn’t think 33 years later people would still be talking about this, but that’s because when we first started when (Richard) invited us it was simply a membership issue, but for the world it was a civil rights issue.”

Dr. Whitlock continued her speech and talked about the various projects she’s been a part of throughout her decades-long membership with Rotary.

As a former Rotary district governor, Dr. Whitlock, who said she was inspired by authors Nicholas Kristof and Sheryl WuDunn’s “Half the Sky: Turning Oppression into Opportunity for Women Worldwide,” decided to direct her focus on educating young women in underserved, poverty stricken areas.

She turned her efforts to the Piyali Girls School near Calcutta, India where her district raised about $90,000 to support the school. Last month, Dr. Whitlock, who has an extensive educational background, said she visited the school, which marks her 10th trip there, to visit with students and to provide educational training to their instructors.

With speaking engagement all around the world, Dr. Whitlock required no stipend for her visit and while in Coos County she encouraged folks who attended her presentations to make donations to the Piyali Girls School.

“The more you give the more you get,” said Dr. Whitlock. “Giving is the ultimate experience and what I’ve learned from Rotary is that there is no limit to the generosity of individuals who find a problem that seems so impossible to solve, but can find solutions.”

Germaine-Shimotakahara, who is the fifth woman to become president of the Coos Bay-North Bend Rotary Club’s throughout is nearly 100 year history, said she met Dr. Whitlock at a Rotary leadership conference last summer in Hamburg, Germany and knew immediately she wanted to invite her to Coos County to share her story and insights.

According to Germaine-Shimotakahara, women make up 38 percent of membership in the Coos Bay-North Bend Rotary Club, which is slightly higher than the national average of 32 percent. At the start of the new Rotary year, which began July 2019, the club started with 104 members and has since grown to 117 members, she said.

“I have never heard anyone so inspiring than (Dr. Whitlock),” said Germaine-Shimotakahara. “She has changed the world for women.”

The public is being asked to help identify two individuals after they abandoned a vehicle on the railroad tracks.