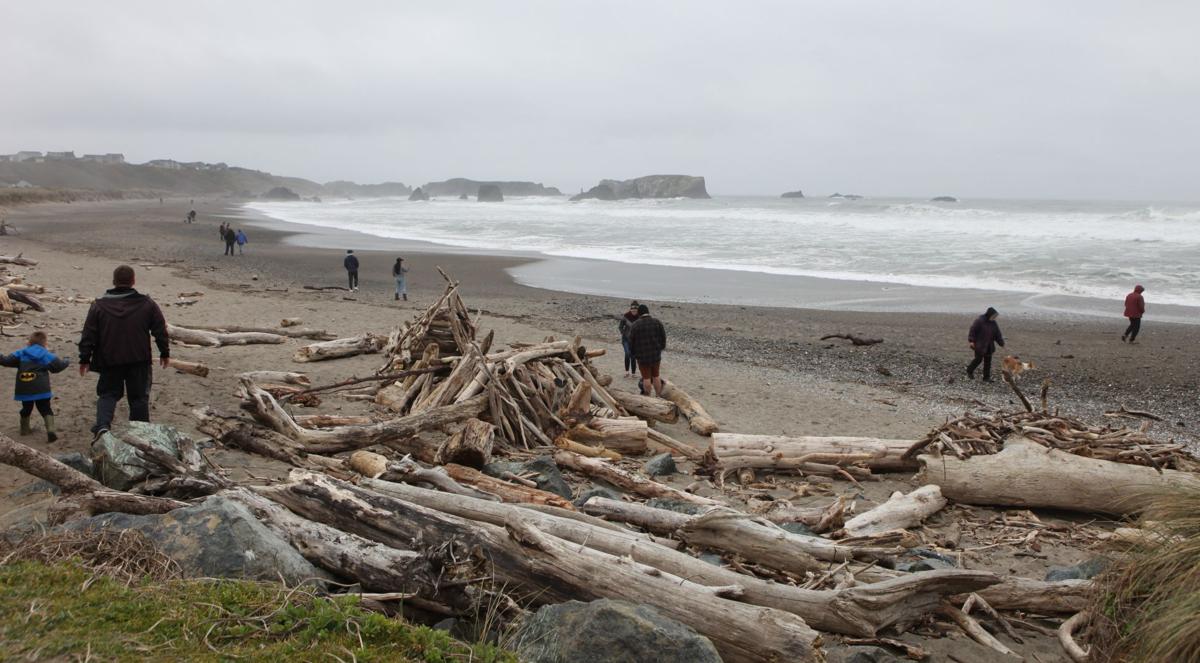 Visitors flocked to the beaches and other public areas in Bandon last weekend at the start of Oregon's Spring Break, prompting city officials to pass an emergency resolution to ban all non-residents immediately. 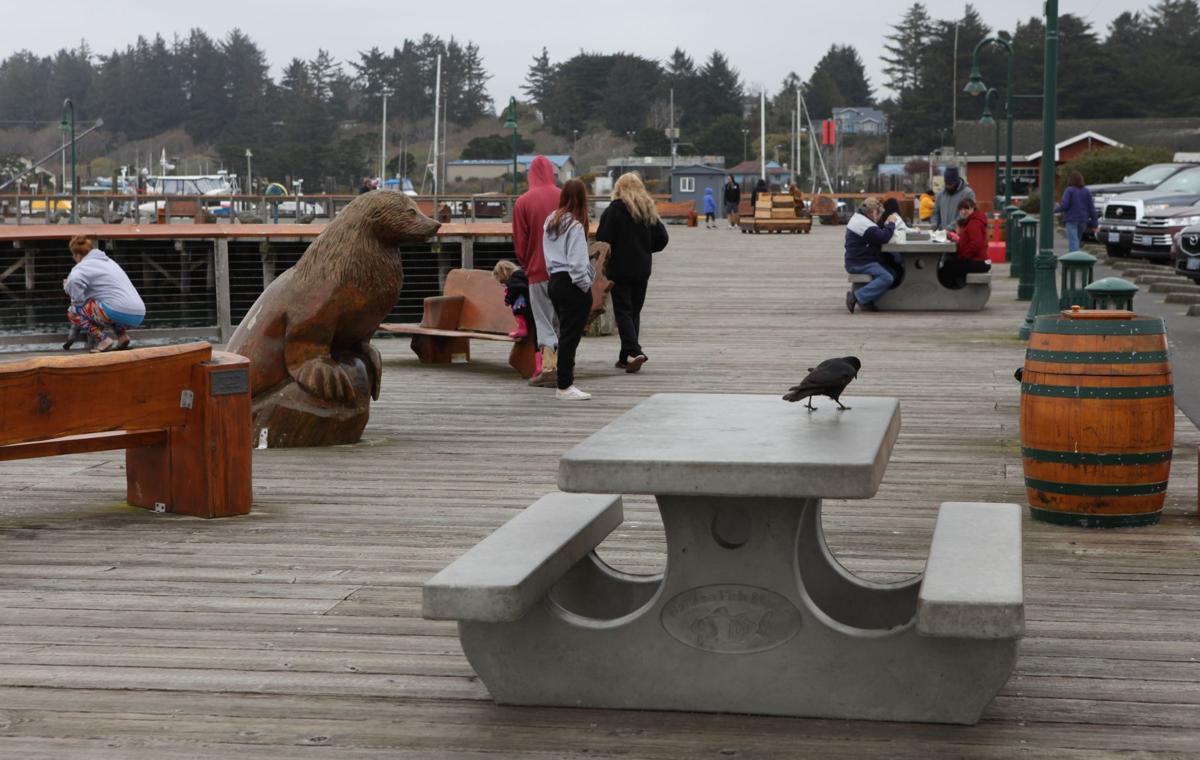 Though not as busy as usual during Spring Break, the Port of Bandon's Boardwalk was still crowded with people over the weekend, presumably visiting from out of the area.

Visitors flocked to the beaches and other public areas in Bandon last weekend at the start of Oregon's Spring Break, prompting city officials to pass an emergency resolution to ban all non-residents immediately.

Though not as busy as usual during Spring Break, the Port of Bandon's Boardwalk was still crowded with people over the weekend, presumably visiting from out of the area.

BANDON – In response to the dozens of visitors who arrived in Bandon last week, preparing to spend Spring Break recreating at the coast, the Bandon City Council held an emergency meeting Monday afternoon and unanimously passed a resolution asking them to please leave -- immediately.

While Bandon and all other communities nationwide deal with the COVID-19 pandemic, there are still people who didn’t take Governor Kate Brown’s recommendations seriously to stay safe by practicing social distancing.

After vacationers from around the state and surrounding states flocked to coastal getaways last weekend, Brown tightened the social distancing measures and issued an executive order directing everyone in Oregon to stay at home to the “maximum extent possible” and added to the list of businesses that will be temporarily closed to stem the spread of COVID-19.

In response to the number of visitors coming to Bandon, and following similar actions in other Oregon coastal towns, the City Council approved a resolution to limit the transmission of COVID-19 by telling visitors to leave.

“One thing that I want to stress is that our neighbors from Coos and Curry counties are still welcome to shop here as they are not affected by the resolution,” said Mayor Mary Schamehorn in an email. “We made several tweaks to the original proposal and the biggest one is that we added the word ‘overnight’ to Section 1, which now says: ‘All overnight visitors within the City’s jurisdiction are ordered to evacuate within 24 hours of the effective date …’”

“Without the word ‘overnight,’ it made it look like people from Langlois, Coquille or Myrtle Point could not come here to buy their groceries,” Schamehorn added. “And that simply is not true, and we definitely wanted to clarify that.”

At the request of a local minister as well as Amy Fine, CEO of the Southern Coos Hospital & Health Center, the City Council added a line to Section 2 that said people could remain in the motels for medical purposes, which would include doctors and nurses who are in Bandon on a rotating basis.

Another healthcare worker said that if he were to contract the virus rather than quarantine at home where he could infect his family members, he would quarantine in a motel room.

From March 16-22, the city experienced a heavy influx of visitors from outside the city. Visitors congregated throughout the city without following social distancing guidelines issued by state and federal authorities and causing a depletion of critical resources such as food and supplies at local vendors.

City Manager Dan Chandler said he visited local grocery stores and was shocked when he was told visitors were stocking up on food and other supplies.

The resolution allows Chandler to authorize a limit on the amount of a single transaction from a grocery store, drug store or other establishment selling “critical or important supplies.”

"Our City Council was surprised at the number of people who came to town last week and who were flat-out ignoring any social distancing practices," Chandler wrote in an email. "This creates a dangerous situation for a community like Bandon, with a high percentage of elderly people, and limited hospital beds. It won’t take much to overwhelm our local health care system."

"Our hearts go out to everyone caught up in this pandemic, but we listened to the experts. We hope that by making the hard decisions now, we can all get back to normal sooner.

The community overall has been very supportive of the council’s decision," Chandler added. "It is unfortunate that a couple of hotel owners are refusing to comply. We would hope that they would have more concern for the community than that, and we are exploring enforcement options."

Bullards Beach State Park campground was full on Friday and Saturday nights, before the Oregon State Parks and Recreation Department closed all the state parks on Saturday afternoon, asking visitors to leave by 1 p.m. Sunday.

County parks are now also closed. The Governor’s “stay-at-home” mandate stipulates that while people are encouraged to take a walk in their neighborhoods, practicing social distancing, they are not allowed to recreate at public parks.

OPRD has not yet closed the beaches to the public, but has the authority to do so.

Aside from food and other goods, the southern Oregon coast has limited medical resources, which further endangers the local population when there are large influxes of visitors during times of declared emergencies, according to the city.

“The Bandon City Council believes an ongoing influx of visitors to the city poses a serious risk to the health and welfare of the local populations during the COVID-19 crisis,” states the resolution.

The city’s declared state of emergency on March 19 authorized it to carry out any activity to minimize the impact of emergency conditions.

With that in mind, the City Council required that all overnight visitors within the city’s jurisdiction to evacuate within 24 hours of March 23 and remain evacuated while the resolution is in effect.

The Council defines a visitor as “any individual who is spending time in the city for pleasure, recreation or non-business reasons and is not a resident, property owner or business owner.”

“This really came about because of the concern that I heard over the weekend from locals who were fearful because of the large number of tourists who were arriving here for Spring Break,” Schamehorn wrote.

Schamehorn said Bandon Chamber of Commerce President Margaret Pounder spoke with most of the motel owners over the weekend and Pounder said they understood as they also had their own concerns.

“I am extremely worried about the economic health of our economy and well as the physical and mental health of what is happening across the country,” Schamehorn wrote. “But most important, it was necessary to take these drastic steps to comply with the governor’s order of ‘stay home, stay well.’

Schamehorn said she spoke with the mayor of Warrenton on the Oregon coast, who was apparently the first one to institute a closure to tourists. Warrenton has a number of large campgrounds within their city limits where many people were staying.

“He, like the locals I spoke to here, encouraged us to approve this, which we did on Monday,” Schamehorn wrote.

“I have also been concerned about the impact of Bandon Dunes Golf Resort and emailed both (General Manager) Don Crowe and (owner) Mike Keiser asking for their help in addressing the problem,” Schamehorn added. “Last night, Don emailed me to say the resort would be closed down Wednesday until April 6. I know this was a hard decision to make, but it was the right one.”

Also excluded from the resolution are essential workers, including but not limited to doctors, nurses and other healthcare workers, U.S. Coast Guard members, delivery drivers and other people providing essential services to the city, and people staying in lodging for medical purposes.

Hotels, inns, bed-and-breakfast establishments, temporary vacation rentals and short-term rentals are prohibited from operating while the city’s emergency declaration is in effect.

All hotels within the city limits of Bandon are permitted to provide services only to residents registered for longer than 30 days, employees of a facility provided lodging at no cost as a requirement of their employment, and any essential workers providing services to the city.

Property owners and managers of Bandon hotels were asked to “take all reasonable steps” to ask visitors to leave no later than 5 p.m. on Monday, March 23.

The declaration remains in effect through at least May 1, but may be extended as necessary.

“We have to err on the side of caution to keep our community members safe, and that is what we have done,” Schamehorn wrote. “But people still need to observe the social distancing requirements, which are so critical to stopping the eventual spread of the coronavirus.

“It’s really is up to each of us to do what we can to stay safe which in turn will protect our family, friends and neighbors.”