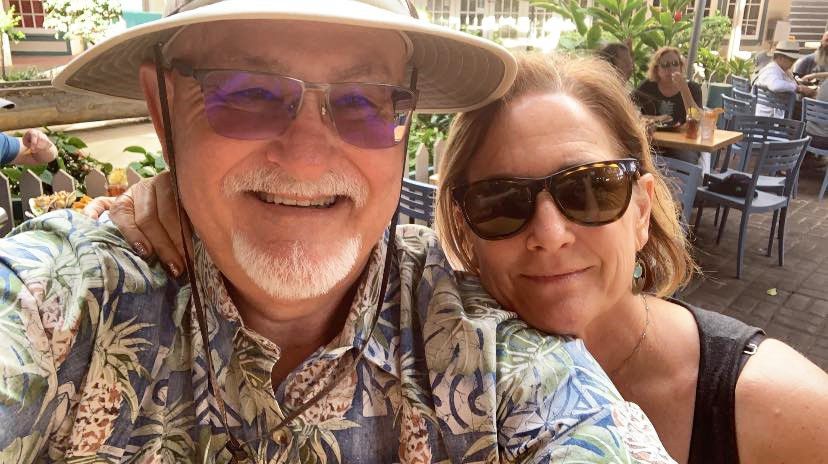 Mike and Kathleen Sterling are in quarantine at Travis Air Force Base in Fairfield, Calif., after traveling on a cruise with Princess Cruise Lines where several people tested positive for COVID-19. . 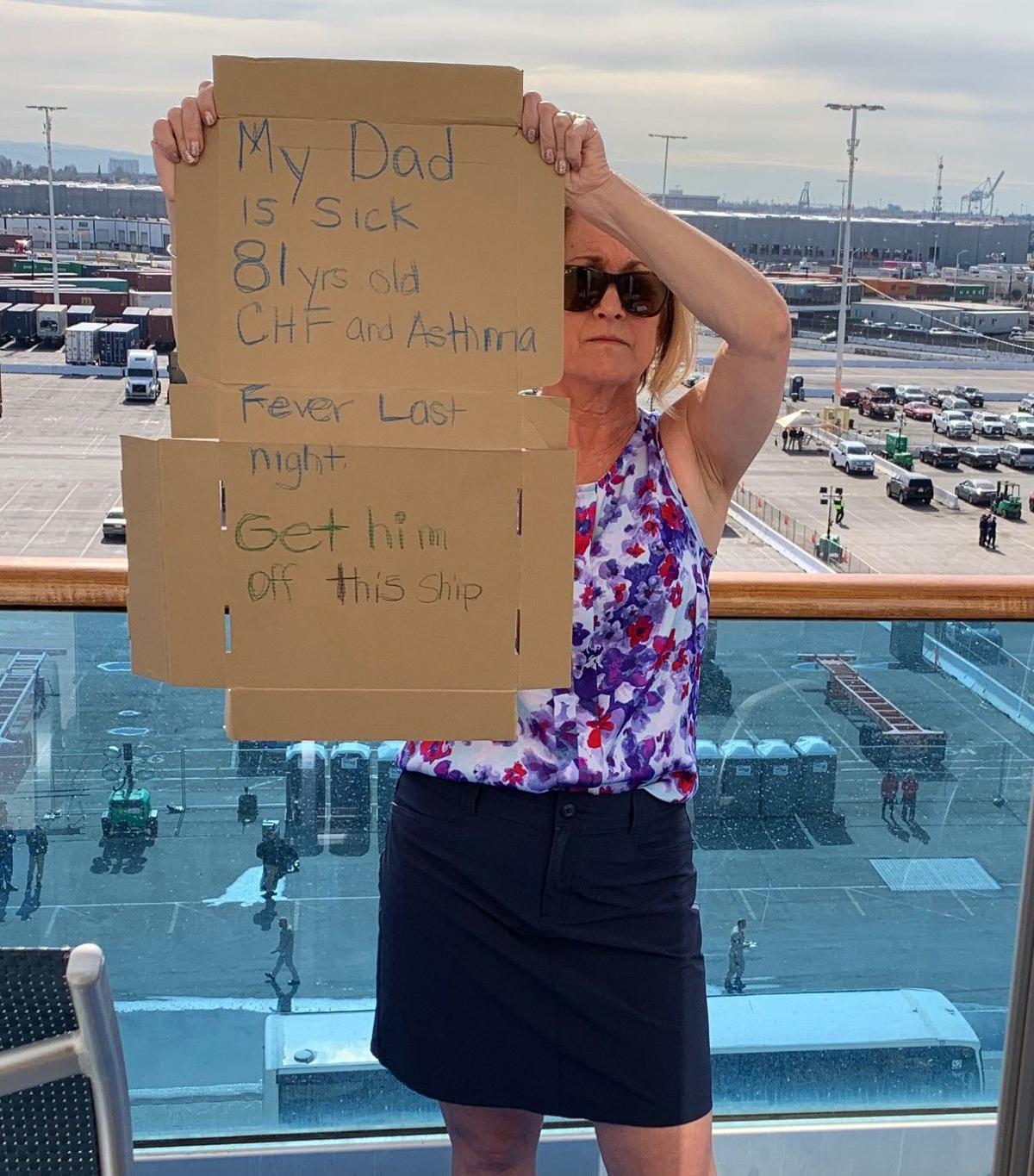 Kathleen Sterling holds up a sign to advocate for her elderly father who was on a cruise with them when several people tested positive for coronavirus. 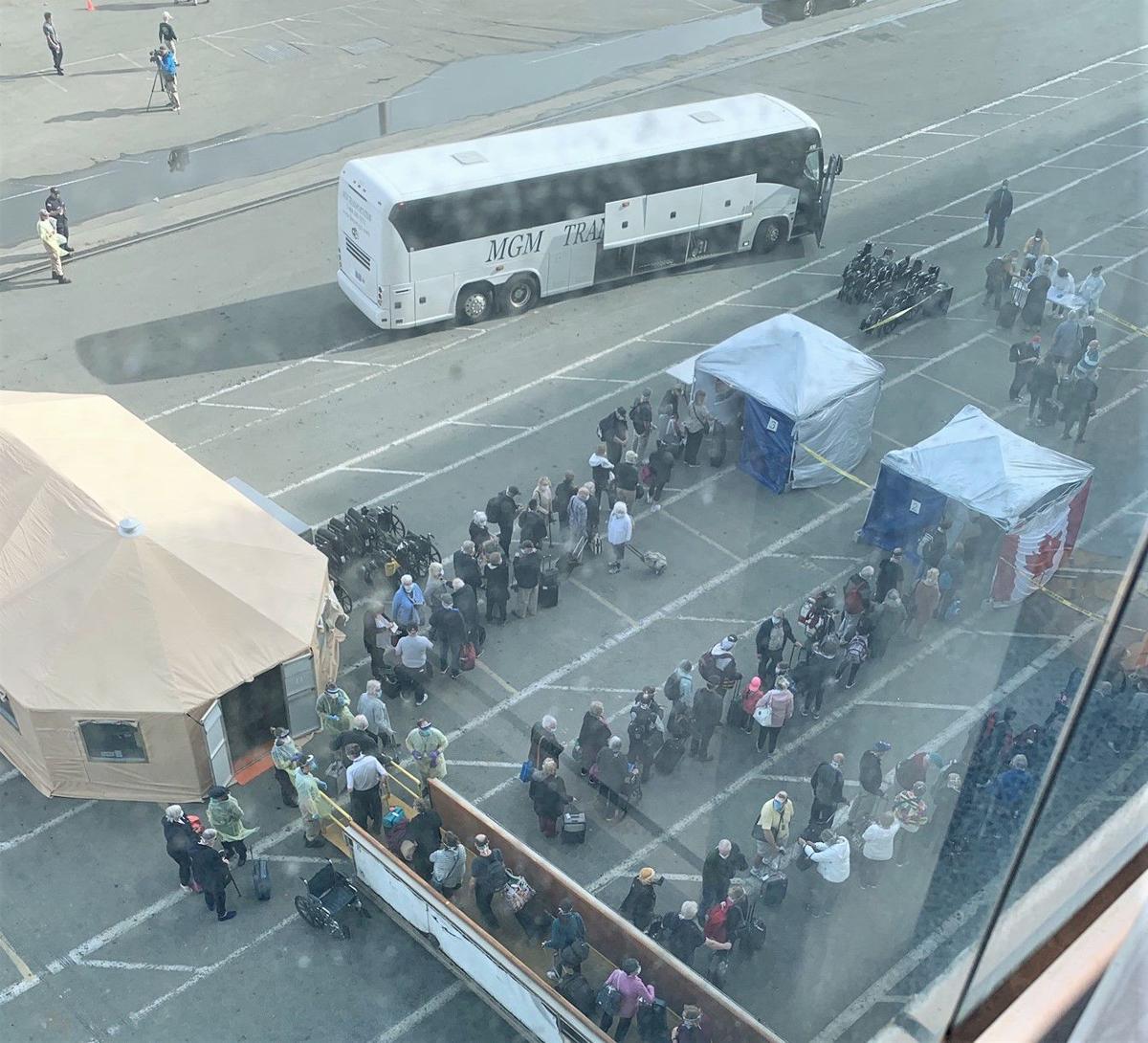 Mike Sterling took this photo from the ship of a group of Canadians leaving the ship as he and his wife Kathleen, along with her elderly parents, waited to be off-loaded. 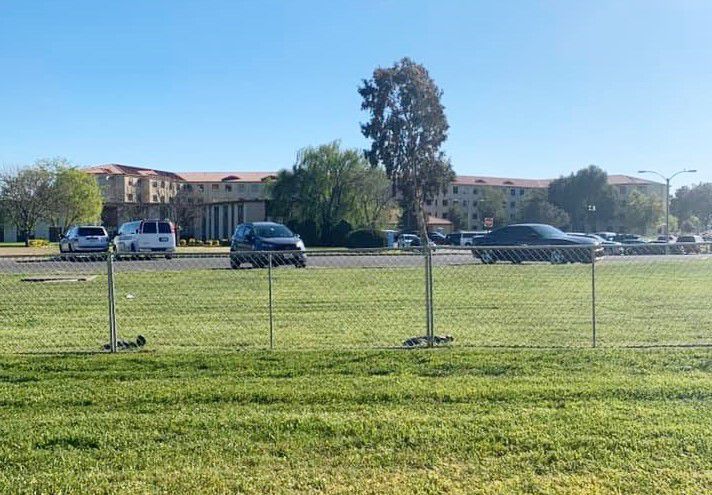 TRAVIS AFB, Calif. — When Mike and Kathleen Sterling were heading to Mexico after spending more than a week in Hawaii on a much-anticipated 15-day Princess Cruise Lines trip with Kathleen's parents, the captain's voice abruptly sounded over the ship's loudspeaker.

They were changing course, cutting the cruise short and heading back to port in San Francisco. There were more than 20 COVID-19 cases on the ship and someone on the same ship on the cruise prior to theirs had died from the virus. This is the same cruise ship that made national headlines recently when it was unable to dock for several days due to the presence of the coronavirus.

Little did the Sterlings know they'd be a part of the news.

The 2,000 passengers on the ship and most of the 1,000 crew were told to isolate themselves in their cabins. However, Kathleen's parents, who are elderly and with chronic health conditions, were on a different level of the ship and were both suffering from the flu. Kathleen wasn't allowed to physically check on them, though they were in contact via cell phone.

The situation only got worse, said Mike.

"We got to San Francisco, but we circling outside the port instead of docking," Mike said. "On Wednesday, we were quarantined and were given food on a tray outside our rooms."

Then on Thursday, a Coast Guard helicopter dropped tests onto the ship. Forty-nine people tested positive and of that number 21 of them had the virus. Of those 21, 19 of them were crew members, Mike said.

When the ship finally docked, people were told the elderly and sick would be let off first. But Kathleen's parents were not among them. Instead, Mike said, a group of Canadians on the ship were off-loaded and tested in tents set up outside the ship, then loaded onto a bus. They tried to call the ship's captain to tell him Kathleen's parents were ill and elderly. By that time, her father was suffering from a fever and the crew's doctor had given him medicine for flu symptoms but wouldn't let Kathleen speak to him. The couple was frustrated and angry and didn't feel informed about the situation.

"We're not happy at all with Princess Cruise Lines and the lack of information," Mike said.

Mike Sterling took this photo from the ship of a group of Canadians leaving the ship as he and his wife Kathleen, along with her elderly paren…

At that point, Kathleen made a sign that she held outside their balcony, facing the docks. The sign pleaded for her father to be removed from the ship immediately due to his age and chronic heart failure condition.

That got the captain's attention and her father and stepmother were able to leave the ship.

Mike and Kathleen were able to leave soon after and they and her parents were taken to rooms at Travis Air Force Base, where they must spend 14 days in quarantine, starting March 13, in addition to the six days on the ship.

"We're fine," Mike said. "We take our temperatures every day and haven't had any symptoms."

Kathleen's parents are doing better and don't have any COVID-19 symptoms, though are being quarantined on the other side of the Air Force base. All of those in quarantine are able to go outside for walks, but only within a fenced area. They also have to wear face masks if they leave their rooms. Thankfully, Mike has not heard of any deaths from the cruise they were on due to the virus.

Mike and Kathleen Sterling are in quarantine at Travis Air Force Base after being exposed to people who tested positive for the coronavirus. N…

Kathleen, who works at Southern Coos Hospital & Health Center, is able to use family leave for her longer-than-intended absence. Mike, who is a real estate broker, owns a boat in Bandon and loves being on the open sea but said it was the worst vacation he's ever had. Though they both understand the gravity of the COVID-19 situation and the importance of following mandates, Mike is resolute.

The City of Coos Bay issued a press release Friday, March 20, reminding residents to only flush toilet paper down the drain as its wastewater operators have noticed a significant increase in non-flushable products.