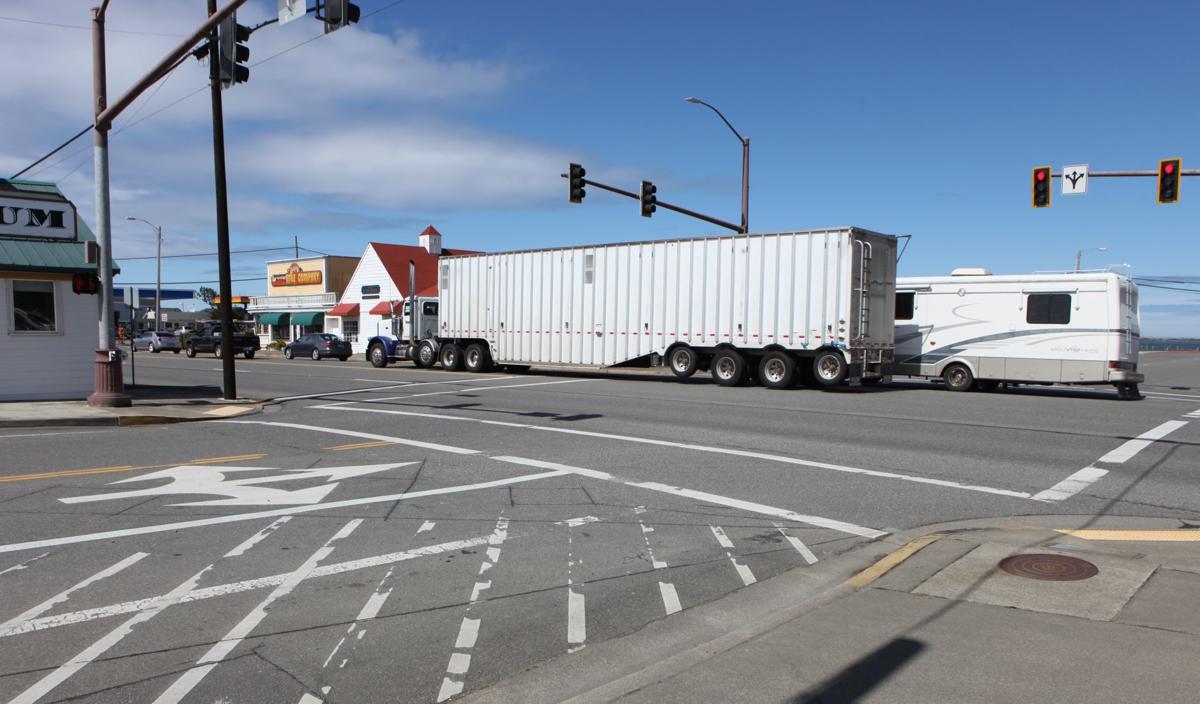 Intersection at U.S. Highway 101 and Fillmore 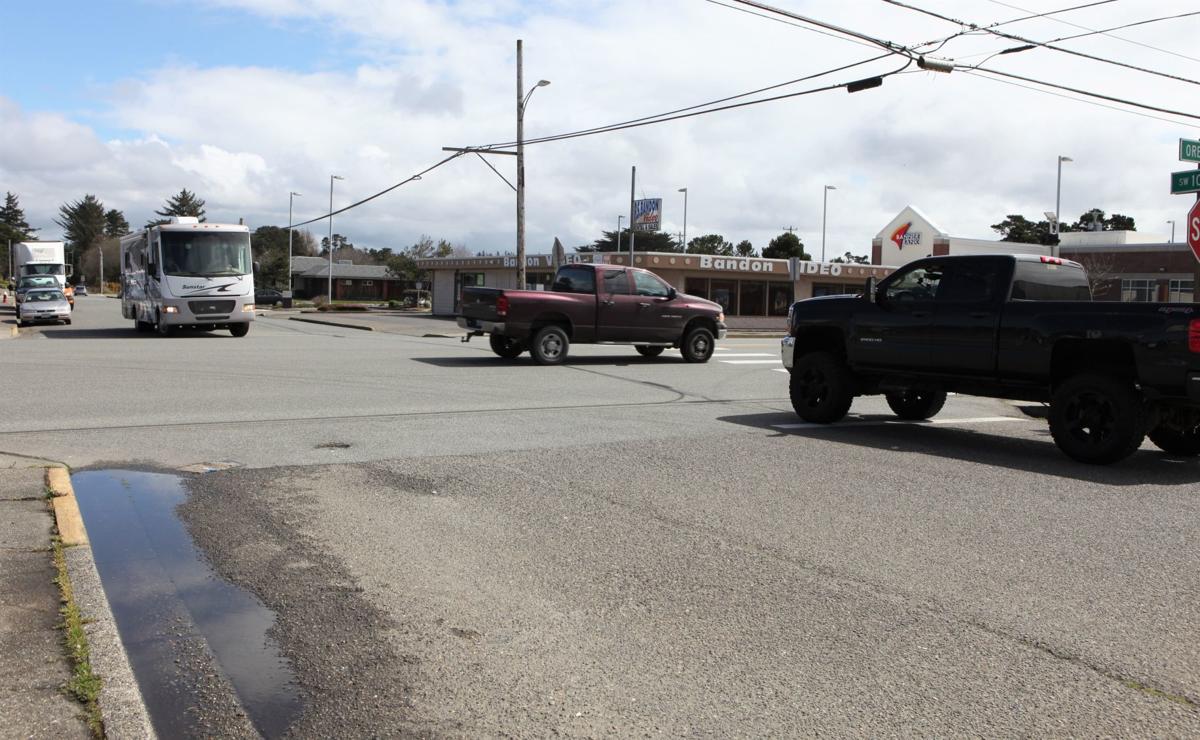 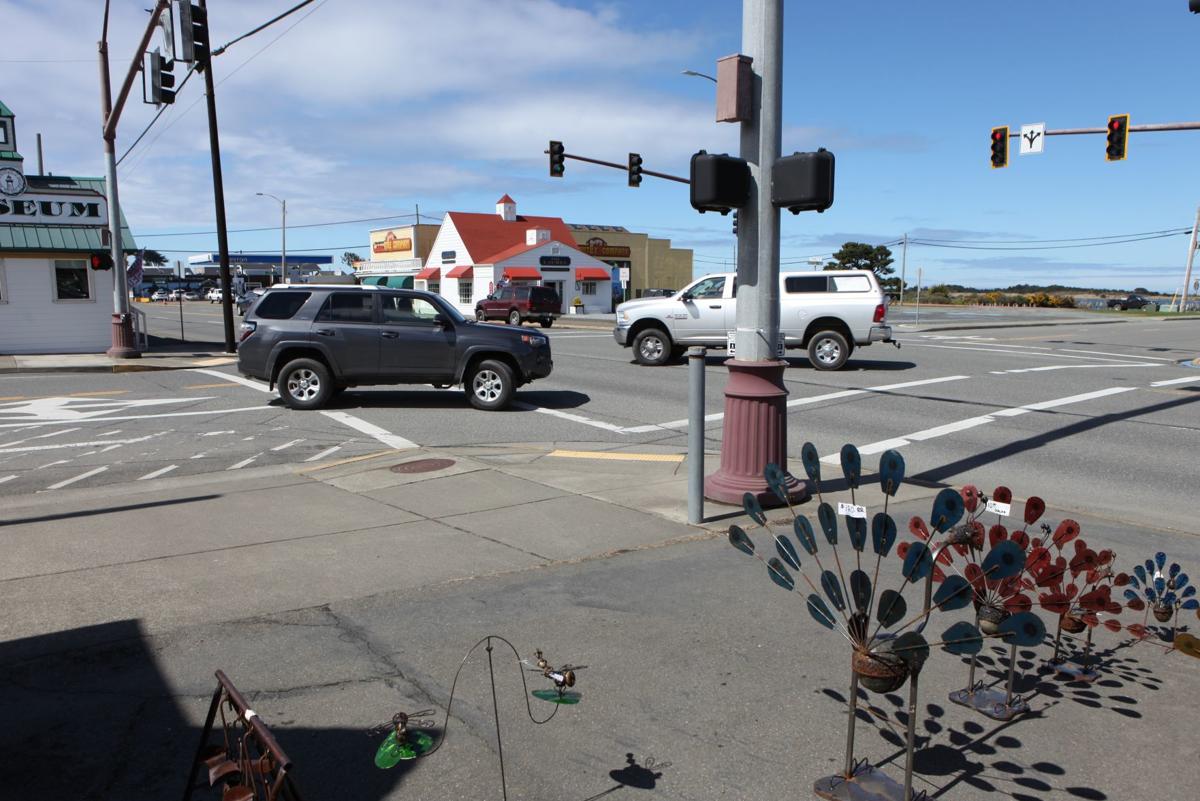 Intersection of U.S. Highway 101 and Fillmore

BANDON - Changes are coming to U.S. Highway 101 through Bandon - as soon as the end of the month.

By a 4-2 vote at Monday's City Council meeting, the council approved the so-called "road diet" re-striping of U.S. Highway 101 by the Oregon Department of Transportation for 1 mile through town.

There will also be additional space as a separation for pedestrians and can be used in certain areas as a stopping point for the Bandon trolley and bus service, according to City Manager Robert Mawson.

Parking along Highway 101 will not be allowed at this time, Mawson said.

Saying the City could always "undo" the re-striping, Mayor Mary Schamehorn promised after the vote that if the new highway alignment doesn't work out, the council will change it back to the former configuration.

However, changing it back would cost the City approximately $50,000 - the cost ODOT quoted to have the re-striping done. ODOT will pay for the initial re-striping.

ODOT District Manager Darrin Neavoll was on hand at the meeting to answer questions from the council and the public.

The council already reviewed and agreed to move forward with the re-striping plan at its November meeting, which was also attended by ODOT officials. At Monday's meeting, the council was asked to adopt the specific plan.

For the road diet, the 1-mile re-striping area would begin at the south end of town just south of 13th Street near the 76 gas station. It would continue through town to where the current median ends just south of June Avenue near Bandon Veterinary Hospital, Mawson said.

In addition, crosswalk concerns near the school zone at Ninth Street and Highway 101 and at Highway 101 and Fillmore Avenue, as well as other unsafe crossings at 12th, 10th, Oregon, Chicago, Delaware, Elmira, Harlem and June avenues would be reduced. ODOT officials have stated that a flashing crosswalk sign at Ninth Street in the school zone cannot be accommodated until the highway is reduced to two lanes with a middle turning lane at that intersection.

However, not everyone agrees that the re-striping will be beneficial.

"The people who speed will still speed," Councilor Powell said. "The side streets will get backed up. I'm not in favor."

Councilor Vick said his biggest concern is the Bandon Concrete trucks that have two trailers will have a difficult time turning east from the highway onto 11th Street to get back to the plant. If the trucks use the center lane to make the wide turn, drivers may get confused and continue in the regular lane, causing an accident.

Council President Braun asked ODOT if the new configuration is a problem caused by its design, can the city be off the hook financially to re-stripe the highway back to its original state?

Neovoll said ODOT will stand by any issues caused by the road diet and address those as they are revealed.

"But I don't know how you'd write (financial responsibility) into the contract," Neavoll said.

Resident Scott Vierck addressed the council, saying he doesn't understand what problem the City is trying to fix.

"We have a crosswalk problem, so a flashing light would do it," Vierck said. "We have a simple problem and we're going to change the whole flow of the city? I just don't see this is what's needed."

Kevin Murray, co-owner of the Human Bean coffee drive through and manager of McKay's Market told the council the road diet will cause even more issues for his businesses than there are now, for delivery trucks and for customers.

"As a business owner, I'm strongly against this," Murray said. "The ingress and egress to our businesses (will be affected). To get out and head south (on Highway 101) will be nearly impossible."

Murray asked why Florence and the Empire area of Coos Bay can have flashing crosswalks without having to re-stripe the roads.

Some people also spoke in favor of the proposal.

Schamehorn read part of a letter from former City Manager Matt Winkel, who first introduced the idea. Winkel was out of town.

"I think the road diet will actually help local businesses, whether they want to believe it or not," Winkel wrote. "It will result in slower traffic, improve tourist’s ability to see what businesses they are driving by, better see the arches and entrances into Old Town, and make it much easier to make a left-turn into local businesses. It seems to me that we have had an inordinate number of accidents and close calls with the current configuration. The road diet will certainly improve safety at the Fillmore Avenue/Highway 101 intersection, enable the installation of safe pedestrian crossings, and provide bicycle lanes where bicyclists are currently forced into the vehicular traffic lanes. On top of that, providing more space for pedestrians, benches, and landscaping can’t do anything except improve the appearance and enjoyment of Bandon by visitors and residents alike."

"Bandon’s main street through town needs to stop serving as a high-speed passing zone for tourists and commercial vehicles that are trying to get out of town so they can get to another city as quickly as possible without stopping to patronize Bandon businesses or enjoy the recreational opportunities here," Winkel added.

Jim Seeley told the council that as a resident, he's seen how positive the road diet has been for Port Orford, where the highway was re-striped in the same manner a couple of years ago.

"Now is not the time to be penny wise and pound foolish," Seeley said. "I think we should give it a try and let's see if we love it as much as Port Orford does."

Patrick Salandro also said he is in favor of the road diet. He said the highway now is dangerous for cyclists and if a pedestrian or cyclist were to get injured, it wouldn't take much to sue the city.

"If we end up not liking it, we can go back and change it," Salandro said. "I think the city would be foolish not to move forward."

The re-striping could begin as early as April, depending on weather. Neavoll said it will take about three days to complete and the highway will remain open during that time.

No pool in park

City Manager Robert Mawson announced at Monday's meeting that the non-binding survey sent out in the City's utility bills had been tabulated and he presented the results to the council. Approximately 3,800 surveys were sent out in the bills and the city received 352 qualified surveys back, some of which represented two votes in one household. Of those, 367 people said they were in favor of a swimming pool being located in City Park and 280 survey respondents said they were against the idea.

There were a number of comments made on the surveys and presented to the council as well, but those were not read to the public.

Following the presentation, Mayor Mary Schamehorn said she wasn't sure how the City got to the point of such animosity between those in favor of a pool located at the park and those against. Last year, the council voted 5-1 to not locate a pool in the City Park. But since then, an anonymous $2.5 million bequest was announced that stipulated it could only be gifted if the pool was located in the park.

That led to the City instructing the Parks and Recreation Commission to consider the idea and to go on site in the park to scout feasible locations.

Intersection of U.S. Highway 101 and Fillmore

Despite the survey's results, Schamehorn said she felt it was time for the council to drop the issue.

"I think it's best the pool committee build on their own property and (the City) will work with the committee to help them with infrastructure that will allow them to build on their property," Schamehorn said, referring to the 10-acre piece of land the nonprofit Bandon Swimming Pool Corporation already owns located adjacent to City Park.

Schamehorn said in addition to the huge divide the issue has caused in the community, as witnessed through social media and letters to the editor as well as advertising in the Bandon Western World and Coffee Break, the City also could never solve the liability issues. In addition, community pools in other areas of the state, including Ontario and Sandy, have had to close recently due to lack of funding.

"We don't know what's going to happen in the future ... but we can always give our letters of support," Schamehorn said. "It needs to be on pool property and not on city property and I think we just need to put this to rest."

In other business: The council approved to second reading an Accessory Dwelling Unit ordinance. ADU's are now allowed outright by the state but each municipality can address certain specifics for their area via an ordinance. The vote was 5-1, with Councilor Claudine Hundhausen opposed, so the ordinance cannot be adopted until the next regular City Council meeting. Details of the ordinance are available online at www.cityofbandon.org or by visiting the planning department at City Hall.

Bite of Bandon a tasty evening

BANDON - "Sweet Marino, Les and Nick," a night of creativity, laughter and performing arts will be presented by the Bandon High School Speech …