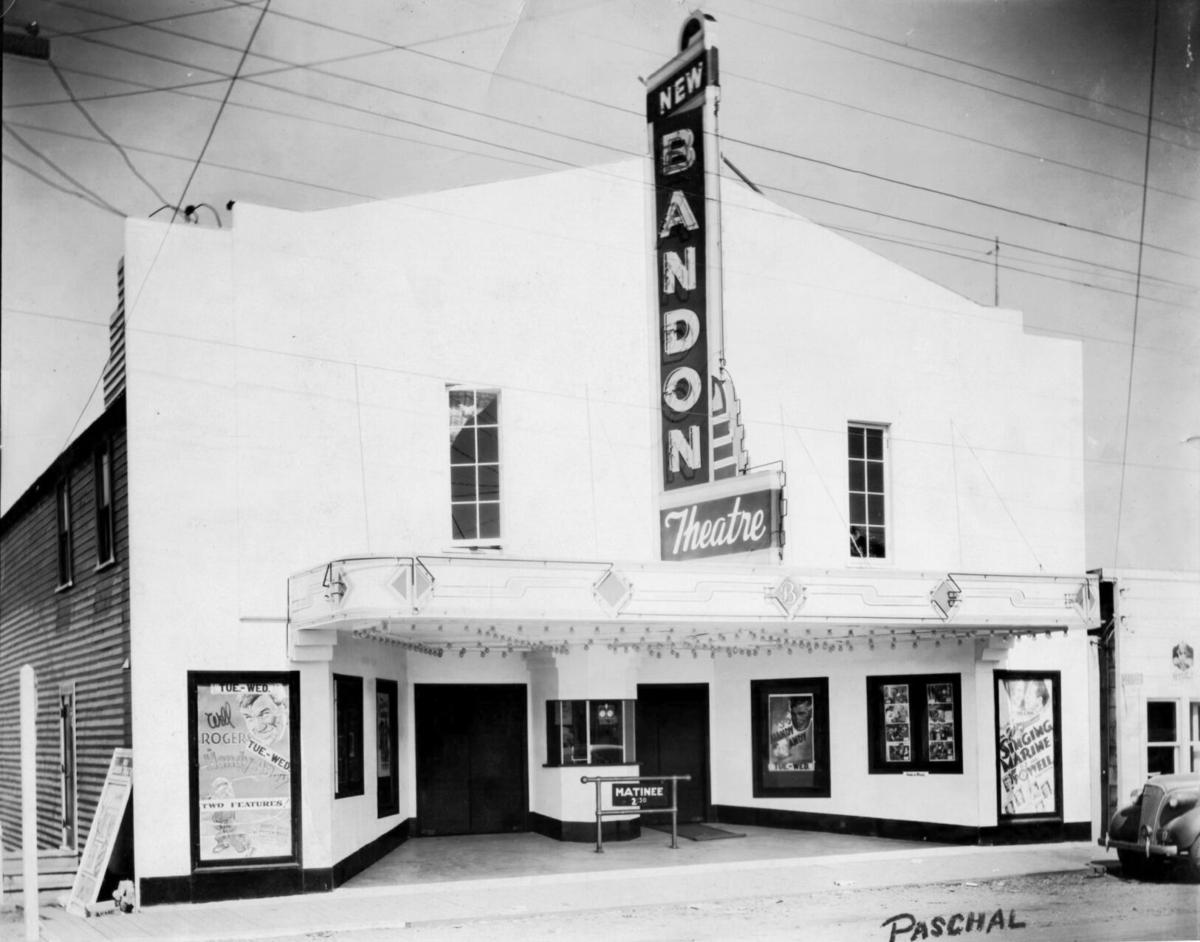 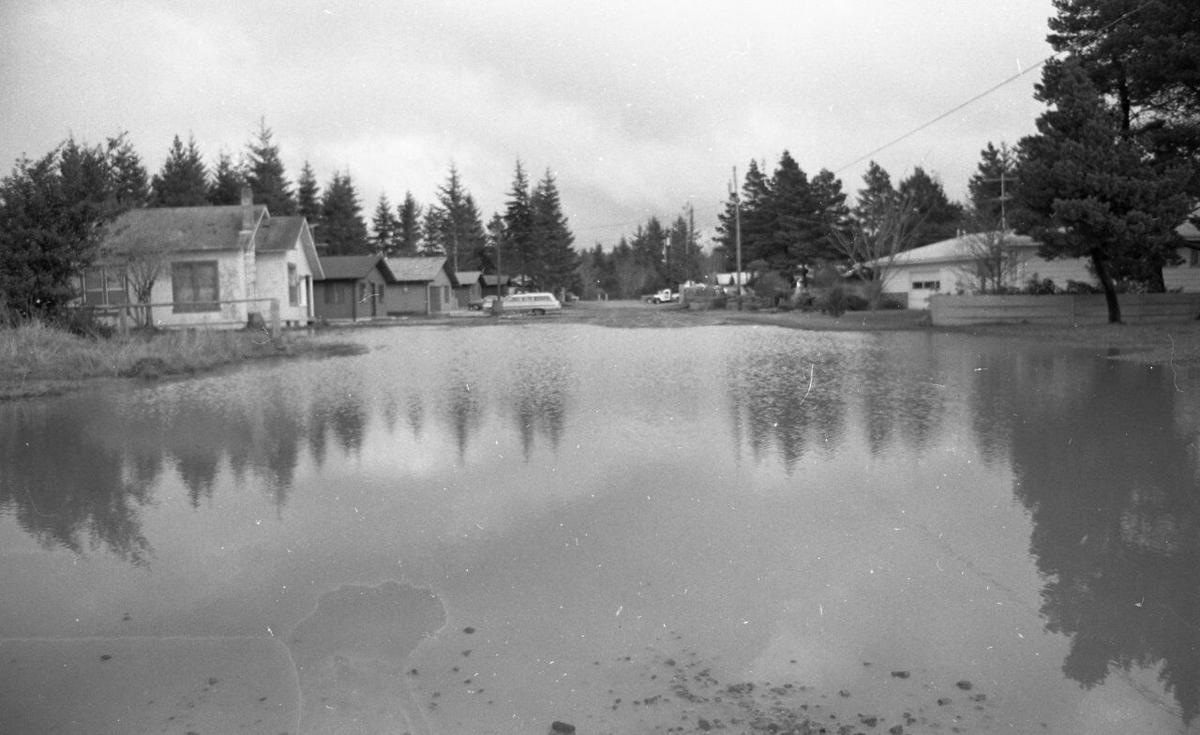 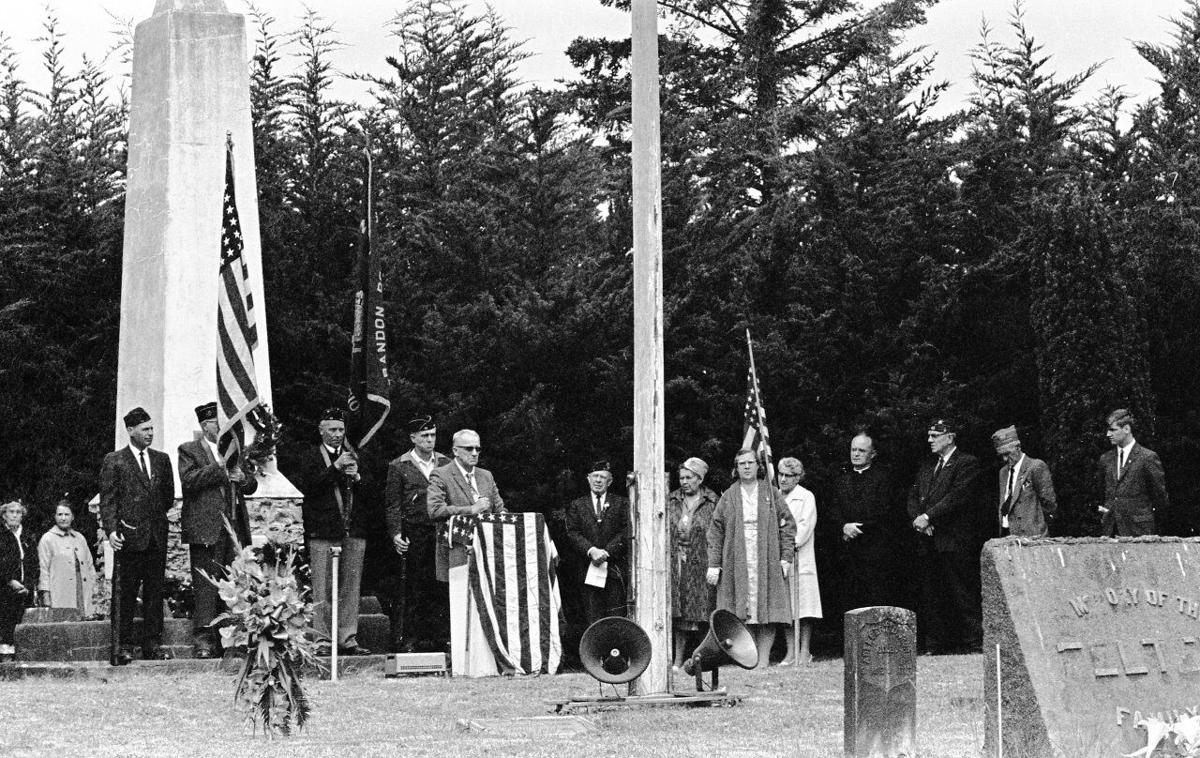 The first picture I am sharing this week is the new Bandon Theatre, built shortly after the Bandon Fire of 1936 by Dick Fisk, who owned other theaters up and down the coast, including one in Gold Beach. Two movies playing the day this picture was taken, probably sometime in the late 1930s, were The Singing Marine, starring Dick Powell, which came out in 1937, and Handy Andy,  starring Will Rogers, which was filmed in 1934.

Before the Fire, Bandon had at least two theaters, the Hartman and the Rex, which were the bedrock of people's entertainment.

The Western World article of June 10, 1937, had this to say about the new theater: "The new theater building is far more complete, and more attractive than most people expected. The entire building was erected and the installations were made ready for the first showing in 32 working days.

"The building is more than a temporary structure. While of frame construction, it is so built that it can easily be encased in concrete walls, thus making it practically fireproof from the outside. An up-to-date steam plant will furnish heat for the structure, which is 42x117 feet. The stage is 14 feet deep, with an opening 42 feet wide.

"The seating capacity of the theater is 570 seats being fully upholstered. The new structure is modern in every respect with ladies' lounge and cosmetic room furnished in chrome steel.

"Living apartments are being provided on the second floor for Mr. and Mrs. Fisk.

"The shows are to be given each night, at 7 and 9 o'clock. Five different feature pictures will be shown weekly, with four changes."

I lived in the two-bedroom apartment upstairs from 1969 until 1976, renting from the then owners, Jack and Shirley Ward, for $75 a month.

The theater, which was torn down in 1985, was located where the vacant lot now sits between Bandon Coffee Cafe and the Harbor Town Events Center/Broken Anchor building.

As we head into winter I am reminded of the winter of 1979 when we were hit with a big rain and wind storm in February, which caused streets like this, in the second photo, to flood.

Rain, which dumped nearly 5 inches of water on Bandon during that week, completely covered Division Street off North Avenue, just north of Rumpty's (Now Rancho Viejo Mexican restaurant). Other roads, including Beach Loop, had water standing on them because of drainage problems.

Wind gusts up to 70 mph damaged signs, including the read-a-board at Buck's Sentry south of town, and played havoc with the new traffic stop lights at 11th and Highway 101. It also caused temporary power outages throughout town.

The third picture was taken at the GAR Cemetery on Memorial Day 1966. The featured address was given by Robert MacWhorter, at the flag-draped podium. Others either identified in the newspaper article or who I can recognize are H.M. "Max" Howe, to the right of MacWhorter, representing Bandon Post 26, American Legion; Clara Harris, Ruth Lennon (with flag), Father Alan Kennedy, William Stewart of Medal of Honor Post 3440, Veterans of Foreign Wars; Milford Harris, and BHS student Mike Mauzey, far right, who recited the Gettysburg Address. At far left, I think I see Vivian Kranick; and the man on the stage, at far left, I am sure is Jack Ward.

I was sorry to learn that Esther Williams, former chair of the Southern Coos Hospital District board of directors and the long-time chair of the city's Parks and Recreation Commission, died Saturday of colon cancer at the age of 84.

Esther had owned a Myrtlewood shop south of town, and for some years operated Brewed Awakenings on Elmira and 101.

She was a retired health care professional, who had worked for the health district before retiring.

I also learned that Joyce Yost Moore, a member of the BHS Class of 1952, died Nov. 23 at Bay Area Hospital. Joyce had worked in the school district cafeteria for years and then returned to school to become a beautician, later opening her own shop in the Wheelhouse building.

I know that her husband, Frank Moore, and her daughter, Joy Moore Hall, had predeceased her,  and I believe she is survived by at least one son, Frank, as well as her half-brother, Bob Elliott of Bandon.

I know that the cranberry growers have completed their harvest by now, but I found an interesting item in the Oct. 4, 1945, issue of Western World. In even older papers I learned that, the school district pretty much excused students who stayed home to help their families with the harvest.

"The cranberry harvest has started in the Bandon area at most of the bogs, but with altogether too few pickers to assure its successful conclusion before inclement weather sets in, according to prominent growers.

"At the L. M. Kranick bogs all methods of harvesting are being employed including water raking, dry scooping and machine picking, but their choice berries are being saved for hand picking. The Hooker and Fish bogs are to be machine picked and water scooped, while hand-picking is in progress at the Boak, Baker, Wilson & Nielson and Biescke bogs.

"Reports on all bogs have not been received but it is generally understood that all are short of pickers and ample opportunity is afforded all who wish to take part in the harvest."

Even today, growers rely heavily on family members and friends to help with the harvest.

I received a press release this week from the Oregon State Police concerning the capsizing of a small inflatable boat at the mouth of Netarts Bay, on the north Oregon coast.

A husband and wife from Fairview were crabbing with an electric motor when their boat capsized in heavy seas. Lyda Hong, 41, who was rescued by the US Coast Guard helicopter crew, survived because she was wearing a life jacket; her partner, Srun Hong, 53, was not wearing a life jacket and his body had not been found at the time the press release was issued.

It is interesting that the TV announcer had the same press release that I received, but she chose not to mention the fact that one was wearing a life jacket and the other wasn't.

It's an important message ....

The Governor has announced new regulations, effective Dec. 3, but instead of being statewide mandates, they have been issued county by county, in four categories: lower risk, moderate risk, high risk and extreme risk.

Restrictions vary depending on the category, which will be re-evaluated every couple of weeks.

At the present time, 21 of Oregon's 36 counties are in the extreme risk category, including the three big metro counties, Marion, Lane, Douglas and several Eastern Oregon counties.

What that means for Coos County is that indoor social and at-home gatherings are to have a maximum of six people (recommended from no more than two households); for outdoor, the maximum is eight people.

Eating and drinking establishments are allowed to have indoor dining, not to exceed 25 percent capacity, with an 11 p.m. closing hour. Outdoor dining is allowed with a maximum capacity of 75 people, six per table; limit two households.

Indoor recreation and fitness establishments, like gyms, pools, K-12 sports, collegiate sports are allowed with a 25 percent capacity or 50 total (whichever is smaller). The same restriction is for indoor entertainment, including theaters, museums, etc.

Retail stores and indoor and outdoor shopping centers are allowed to be open with a maximum 50 percent of capacity, but are to encourage outside pick-up.

Churches, funeral homes and mortuaries are allowed at a maximum 25 percent capacity or 150 total (whichever is smaller); 200 outdoors.

Personal services, like barber shops and beauty parlors, are allowed, and visitation is allowed at long-term care facilities.

For the 21 counties in the extreme category, inside dining is not allowed, nor is indoor recreation or entertainment.