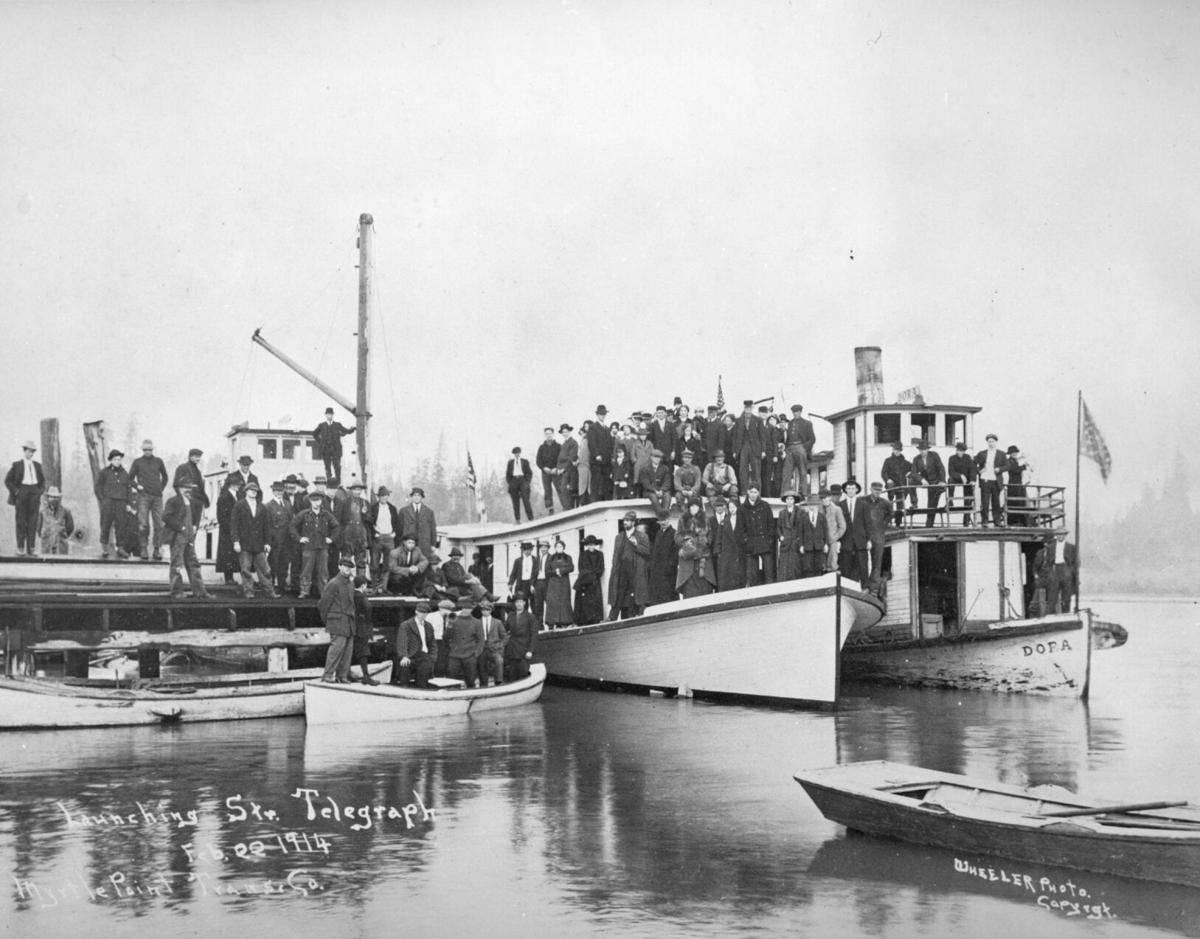 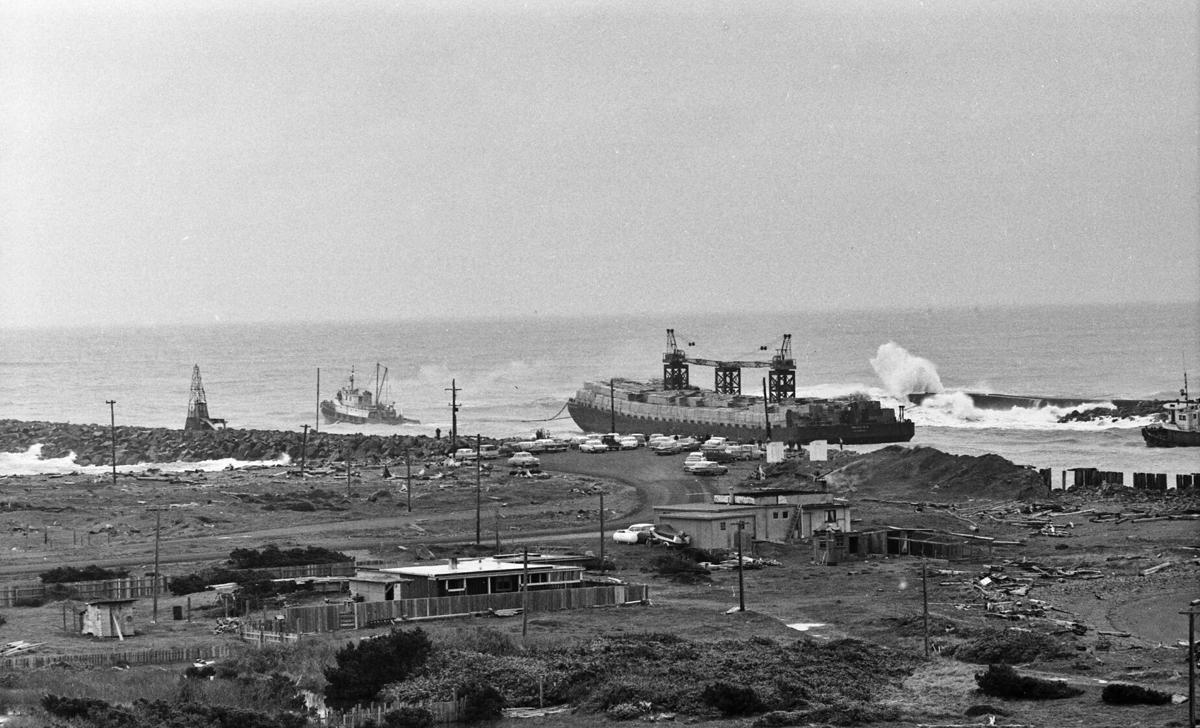 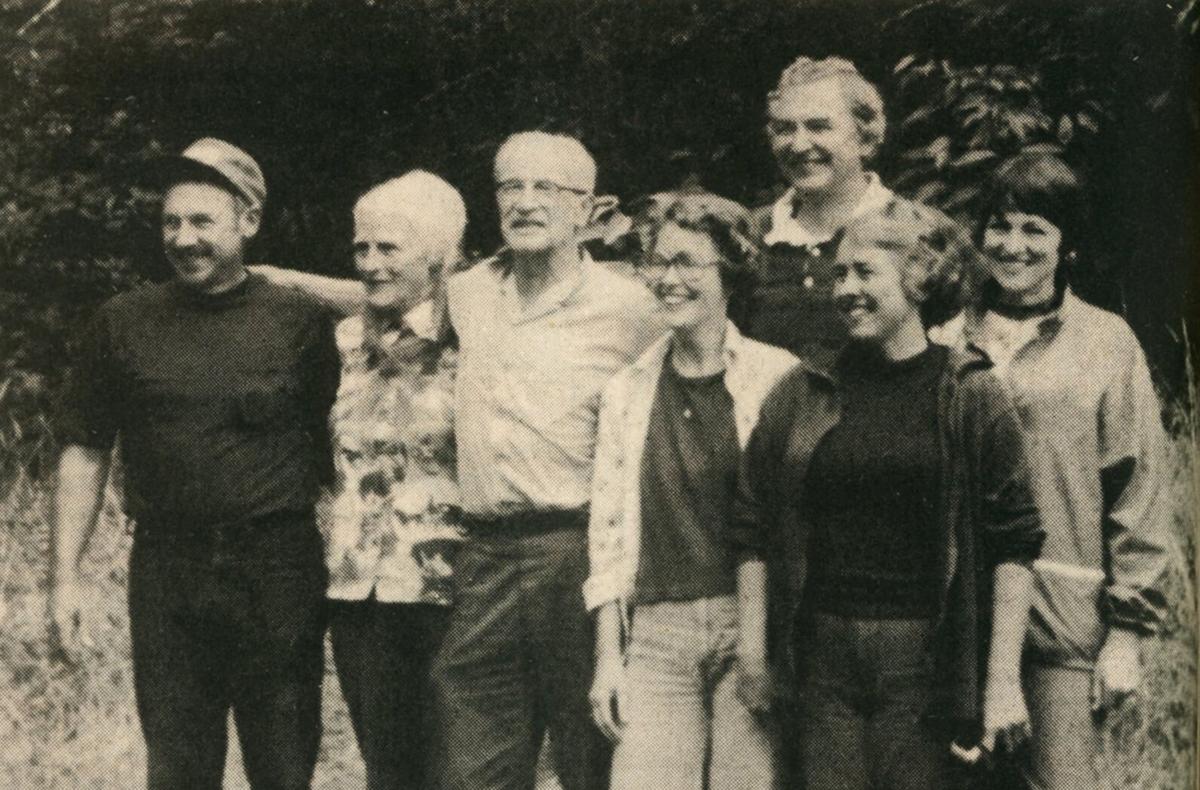 The first picture I am sharing is the launch of the Telegraph, which drew a large crowd to the dock in February of 1914.

The 103-foot long steam sternwheeler was built at Prosper by Carl Herman.

In his book "Wooden Ships and Master Craftsmen," published in 1978, Ernie Osborne talks about the Telegraph, which he said was probably "the best remembered vessel among old-timers in the Bandon area. She was a powerful vessel and, in 1916, was lengthened to 115 feet. From her launching until the end of her career, she was owned by the Panter family of Bandon.

“She was involved in a bitter rivalry with the Charm, and once as the Charm was going into Jarman's landing to pick up a passenger, the Telegraph put her bow against the stern of the Charm, pushed her out of the landing and picked up the passenger herself. The fare was 15 cents. Obscene language turned the air blue; oil cans were thrown; tie-up lines were cut, and as a final result, the U.S. Steamboat Inspectors were called in and ruled for suspensions.”

The Telegraph was finally beached at Paris “Hap” Ward's ranch at Randolph in 1927 along with the Myrtle and later the Dora.

Recently, I shared a picture of the Grace Dollar, which generated so much excitement when it first crossed the bar into Bandon ... and heralded the possibility of even larger vessels carrying lumber out of Bandon. And that is why I chose this picture of the Pacific No. 2 as it crossed the bar in February of 1961 carrying more than four million board feet of lumber. Note how the South Jetty area has changed in the last 60 years.

But it is the Grace Dollar that I want to talk more about, after I found an interesting article in the March 11, 1913, Bandon Recorder, talking about a reception held for the captain and officers of the Grace Dollar at the Commercial Club Hall, with club president E. H. Fish presiding.

G.T. Treadgold, well-known attorney, was called on to deliver an address of welcome.

“In part he said, ‘When I saw the S.S Grace Dollar coming over the bar today I was moved and impressed at the sight of this grand ship entering the harbor of Bandon. I believe it is only a step to the time when we will have a great harbor here, and ships at Bandon take on lumber carrying it through to the ports of the Atlantic without transshipment.

“‘The fact that the harbor has developed from comparative insignificance to its present stage of importance gives promise of greater things.

“‘To advance the opinion that a large city will grow upon the present site of Bandon is considered by many here as fanciful as a mere dream. I believe that the ideas of dreamers supported by practical work will make of Bandon a harbor that will be open to ships as much larger than the Grace Dollar as she is larger than the ships which came into this port, fifteen years ago.”

Today, of course, our harbor is primarily used by recreational vessels and the days of the large lumber carrier is long gone.

Mr. Treadgold, who also served as city attorney, was murdered three years later (in 1916) when he was gunned down in a mechanic's garage across from the court house in Coquille by a Bandon man, who harbored a grudge. He was only 31 years old but had already distinguished himself as a community leader. His murder is a story for another day.

The third picture I am sharing was taken in August of 1978 as Elmer and Grace Gant celebrated their 50th wedding anniversary. Elmer was in the clothing business in Bandon before and after the fire of 1936, along with other members of the Gant family. Grace was a member of the pioneer Thorn family and both were active in the community.

The Gants spent that weekend with all five of their children and other relatives camping on the Sixes River. From left are son Tom, Grace and Elmer, daughter Susan Winnop, son Dr. Jim Gant and daughters, Gloria Haga, and Glenda Hawkins who died recently at the age of 86. The article says their grandson, Gary Gant, flew up from Boulder Creek, Calif., to join the Sixes River gang. Tom, Gloria and Gary still live in Bandon today. Jim lives in Cottage Grove and Susan lives in Satsuma, Alabama.

I am not sure how many people will remember him, but Dan Harper was a well-known chiropractor in Bandon years ago, before lifestyle choices took him in a different direction.

I understand he was found deceased at a property up Two Mile last week. I do not know the particulars, but the woman who told me estimated that he was probably in his 70s.

I also learned Sunday that BHS alumni Chuck Cravey had died in his sleep recently of complications from diabetes. I believe he was in his early '60s. Chuck graduated from BHS in the class of 1976 with Susie Korenko and my youngest sister, Mindy.

Since October there has been an epidemic of marijuana shops in Portland being robbed, including eight involving a firearm, and most attributed to teenagers. The DA's office said 12 of the 21 suspects charged so far have been teenagers.

Initially most of the thefts were smash-and-grabs, but later morphed into armed robberies, one of which ended in the murder of a shop keeper. To make it more dangerous for marijuana shops, they deal only in cash because on a federal level, it is still considered an illegal drug.

The owner of a cannabis shop in Southwest Portland kept his money stored in two black, refrigerator-sized safes in the backroom of his dispensary, with the code known only to the owner and his manager. One contained $125,000 in cash, $25,000 of which the owner was planing to pay to the state in a few weeks’ time when his taxes were due. But robbers zip-tied the manager’s wrists and ankles, leaving him facedown on the floor after they forced him to tell them the code to the safe. They left the dispensary through the back door (with the money) and peeled out of the parking lot. The ordeal lasted 18 minutes.

Shop owners can also have their bank accounts shut down if they try to run cannabis money through their personal bank accounts.

Some are hoping for the passage of a bill called the Secure and Fair Enforcement Banking Act, which would significantly reduce the number of marijuana robberies and burglaries, because there would be little to no cash on the stores’ premises. If passed, the SAFE Banking Act would provide a “safe harbor” that allows banks to offer financial services like loans, credit card processing, and access to capital to the cannabis industry without criminal risk.

Cities and counties across the country will be receiving COVID 19 relief, although the details as to how the money can be used is sketchy at this time.

Having undergone cataract surgery Thursday on my second eye, I can certainly attest to its success as I can see things I did not even know were there .... cobwebs for one; wrinkles for another, but as many have said, the brightness of colors is amazing. I should have done this several years ago, but kept putting it off.

Having to put eye drops in four times a day for a month is a bit of a drag, but it's a small price to pay for having my vision restored. So, if any of my readers are hesitating about having the surgery, don't. There is really nothing to it, and it is definitely painless.

I feel the same way about getting my second COVID vaccine, although I will say I did experience a bit of soreness for a few days, but again the feeling of relief is overwhelming after a year of worrying if I might contract it. The more people who get vaccinated the sooner we will be able to return to some form of normalcy. I personally can't wait for that to happen ....

The crowds were in town this week for Spring Break and thankfully the weather was mostly good as people were sitting outdoors every place they could find a seat. Many restaurants had tables lining the sidewalk, and most were full.

It would be wonderful if our restaurants and bars could just open for inside seating, but I am not sure that will happen anytime soon based on our COVID numbers. But hope springs eternal ....

It's been a week since a 43-year-old Coos Bay woman was killed in a one-vehicle accident Monday night on Whiskey Run Beach. April Garrett died when she fell off the roof of a vehicle, apparently being operated by her 46-year-old husband, Jerry Garrett.

There has been no further information about why she was on the roof of the Mercury Mountaineer on the beach at around 7:40 p.m.

There has also been no information put out about an incident which occurred on Highway 101 at Dollar Hill Saturday evening involving numerous police, fire and other emergency responders. All I know is what I saw on Facebook, which indicated that the driver had been traveling 100 miles an hour and officers were trying to stop him with tack strips north of town. One person said they saw what appeared to be a male being detained alongside of the road. I am sure the story will eventually come out ....