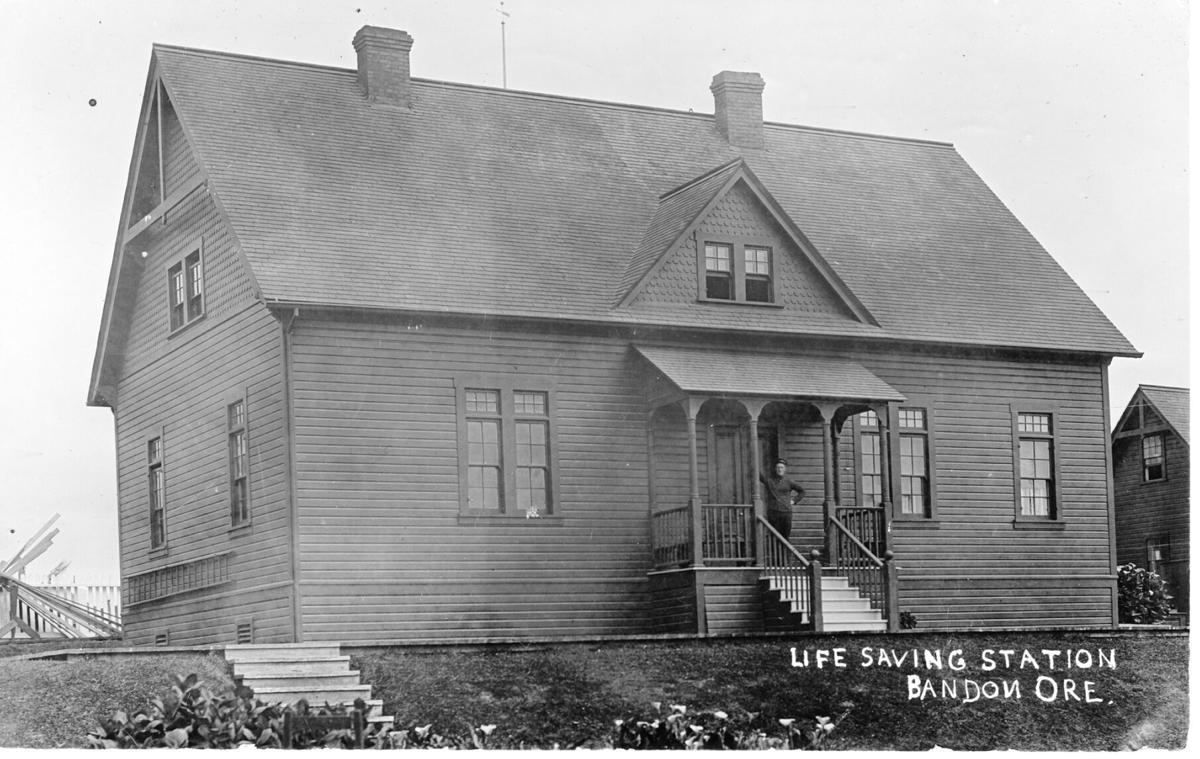 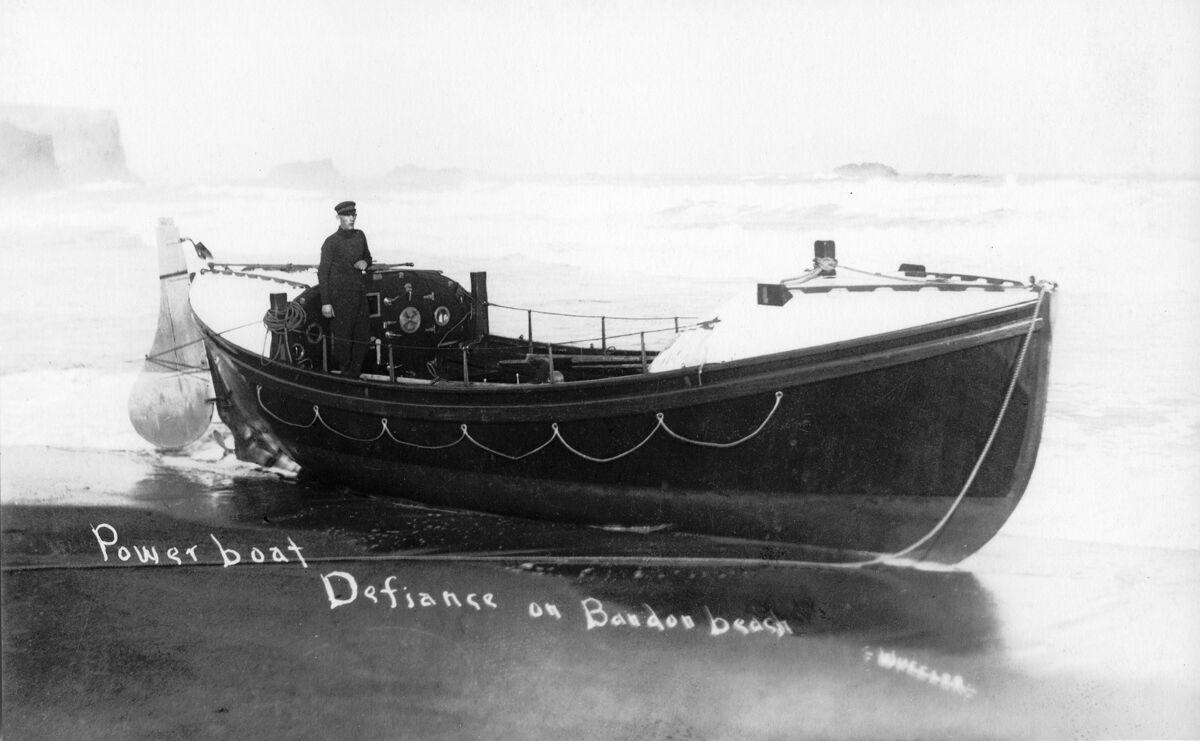 Powerboat Defiance in Bandon circa 1906 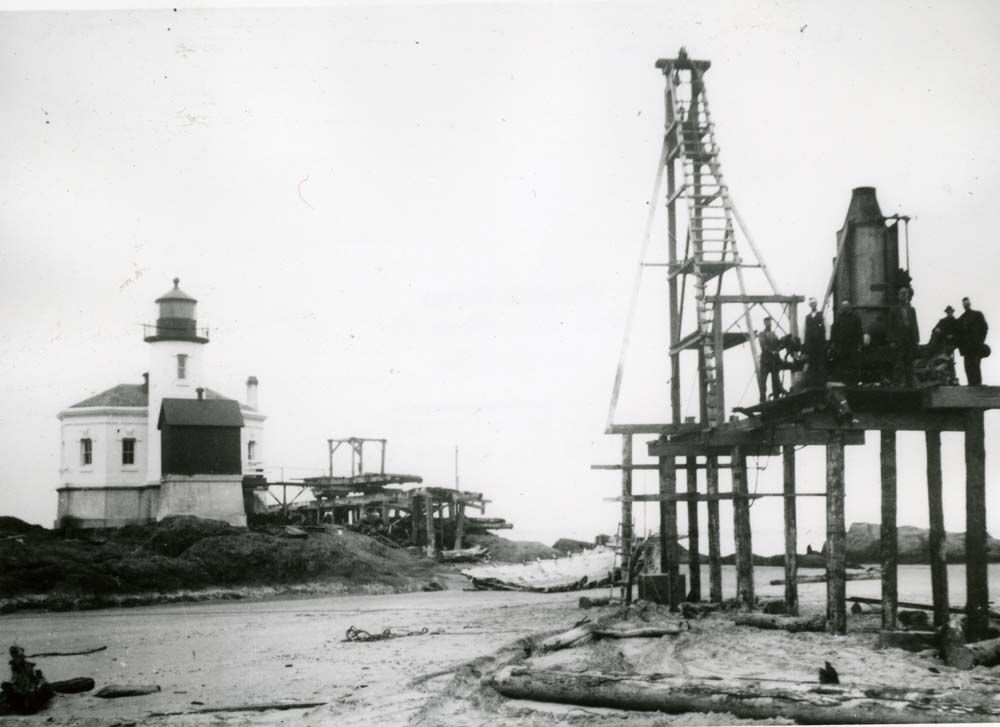 The Coquille River Lighthouse during construction of the North Jetty

Powerboat Defiance in Bandon circa 1906

The Coquille River Lighthouse during construction of the North Jetty

I never realized what an important role the local harbor played in the early days of shipping until I found an article in the Oct. 6, 1911, Bandon Recorder headlined "Many Vessels come to the Coquille River." The subhead read: "The Largest Fleet of any Port Between San Francisco and the Columbia River," as the article talked about the 26 vessels plying in and out of the Coquille River and the total carrying capacity of those ships.

That is why it makes sense that the government would send one of their top power boats to the local life-saving station in the form of the Defiance, which is picture number one.

The Jan. 2, 1912, Bandon Recorder had this to say, in a top front-page article. "The new power life boat for the U.S. Life Saving Station arrived on the (Steamer) Bandon this morning, and she is certainly a beauty. She is 36 feet long, has a 40 horse power engine and is calculated to ride most any kind of a sea.

"The boat was built expressly for the Bandon station and is the first one of its kind to be put on the Pacific coast. Every detail of the boat is perfect and it makes the life saving equipment of the Bandon station most complete indeed.

"It is built entirely of mahogany and white oak, with copper fastenings throughout and weighs 9 tons."

Another article in a subsequent paper explained that the Defiance was the first of 12 boats scheduled to be built, and "is therefore the only boat of its kind now in use in the life saving service, not only in the United States but in the whole world."

The local life saving station (the crew quarters of which can be seen in picture number two) "has quite a wide coast range to cover in case of an accident at sea, as there is no station between here and Humboldt Bay, and it is possibly partly for this cause that the good boat was sent, but the excellent service rendered by Capt. Johnson and his crew, no doubt had much to do with it."

I love seeing pictures of the life-saving crew because I can always recognize Leslie Kranick, who served with the crew for many years, and later became one of the areas leading cranberry growers.

The article adds that "the local life saving station is now perfectly equipped as any station in the United States. In addition to the new life boat, which cost approximately $12,000, the government has spent about $4,000 fixing up and beautifying the local station, a part of which was spent on the concrete retaining wall and sidewalk on First Street."

The concrete retaining wall that the article refers to is still there. I believe the boats launched from the ways, located in the boat station on the west end of First Street and directly across from the crew quarters on the hill. The "new" Coast Guard station was built in 1939.

The third photo shows the building of the north jetty (known in those days as the lighthouse jetty), and dovetails with an article in the Aug. 8, 1911, Bandon Recorder headlined "a portion of the lighthouse jetty goes down." It seems that a stretch of 220 feet was washed out by the big breakers.

The article explains that the latest washout, coupled with the area which previously had washed out, made a gap of nearly 400 feet.

'The lighthouse jetty was built only two years ago at a cost of about $4,000 to the light house department and it would appear that it is impossible to build a jetty that will stand against the continual pounding of the surf in that particular place. It will be remembered by people who were here two years ago, how close the water came to undermining the dwelling of the lighthouse keepers and only for the erection of the jetty at that time, the building would have been in the sea in a few days."

Most of us are still reeling from what happened at the nation's capitol last week. I sat glued to the television set hour upon hour, horrified at what I was seeing.

It's hard to put into words what I felt, but a letter to the editor in Sunday's Register-Guard said it pretty well. This was not written by a columnist for a national newspaper, a TV commentator, or an editor.... but by an ordinary citizen.

It was written by a senior-aged American who said he believes in peaceful protest, free speech and justice.

"What I saw on Jan. 6 shook me to the core. Having lived overseas for 10 years and living through two revolutions, survived the overtaking and burning and looting of our school by extremists, I never thought I would see this again and in the country I love and serve.

"If you are one who thinks this is OK or justified, you have been misled and misguided. Those involved are not patriots; they are terrorists.

"They need to be to be prosecuted to the full extent of the law. And what happened is insurrection, and people from the highest power down to the rioters need to be brought to justice."

Not sure why we are so shocked that this could occur considering what has been happening nightly on the streets of Portland and Seattle, and on a smaller scale in Eugene and at our own state capitol while so many in authority turn a blind eye.

One of the three Oregonians arrested in Washington, D. C. that day happened to be from Bandon. Rodney "Rod" Taylor (not to be confused with Rob Taylor), 57, was charged with violating the curfew. The other two people arrested were involved with the Republican party organization.

Taylor's "take" on what happened in Washington, D.C, differs greatly from what we saw on the national news. He said "it was not a riot.  There were some paid agitators who did some damage on the doors and a couple of windows at the Capitol, and I was trying to alert others to not follow the lead of the agitators engaging in that behavior. Later at our hotel I was trying to show a police officer some video of an innocent woman being beaten by police batons, and I was arrested for a curfew violation at that time. I spent the next three and a half hours in cuffs, total seven and a half hours in custody before I was allowed to pay my $25 fine and go."

Saturday night, he held a debriefing session at Pastries ' Pizza in Bandon. I understand Taylor was not the only Bandonian who was in Washington, D.C., that day, but I have no way to confirm that as Taylor was apparently the only one from Bandon who "made the news."

He had only recently presented a petition to the city council at our December meeting urging us to allow our businesses to reopen. His group (Free Coos County), which also included several local business people, who have a very legitimate concern, and Rob Taylor, gathered in the council chambers to express their concerns about the closure, mandated by Governor Kate Brown.

Outside of bullhorns blaring from the parking lot in front of city hall, urging people to attend the meeting, most people expressed their feelings in a respectful way.

Unfortunately, that is not what happened in Washington, D.C.

I was so sorry to learn that the man who had suffered a medical emergency last Tuesday on north Harlem not far from his Harvard Street Apartments home was Gareth Williams, 57, who is best known as the gentle giant who was on stage for a number of Bandon Playhouse performances over the years. He was a towering presence of a man, with a wonderful singing voice and a quiet demeanor.

He had worked in the kitchen at a number of different restaurants over the years, including Bandon Dunes, Edgewaters and McFarlin's. On the day that he apparently suffered a massive heart attack, he was delivering food from Good Neighbors Food Bank for people who needed help but did not have vehicles, something he did every month.

After suffering the attack, his car veered off the road and struck a vehicle parked in a driveway on the east side of Harlem, with the driver standing outside of it and his dog inside. While the vehicle was badly damaged, the dog was fine. Emergency personnel tried hard to revive Gareth, but they were not successful.

His mother, Dawn Williams, who worked for a time in the city office, died in 2013. Since that time he has lived at Harvard Street Apartments and was an active member of  Faith Baptist Church where a memorial service will be held in the next couple of weeks, according to Pastor Don Conn in information posted on Facebook.

A woman posted on Facebook Sunday that while driving along Beach Loop Road, she encountered the road closed sign in the dip near Crooked Creek, and proceeded through it as many of us have done over the years. But she was greeted by a sheriff's deputy on the other side who gave her a stern warning about the dangers of driving through water, and she just wanted to alert people that they might be cited if they ignore the warning sign.

This has been an ongoing problem for years, but apparently the cost to the county of installing a culvert would be prohibitive; at least it has never been taken care of in all the years that I can remember.