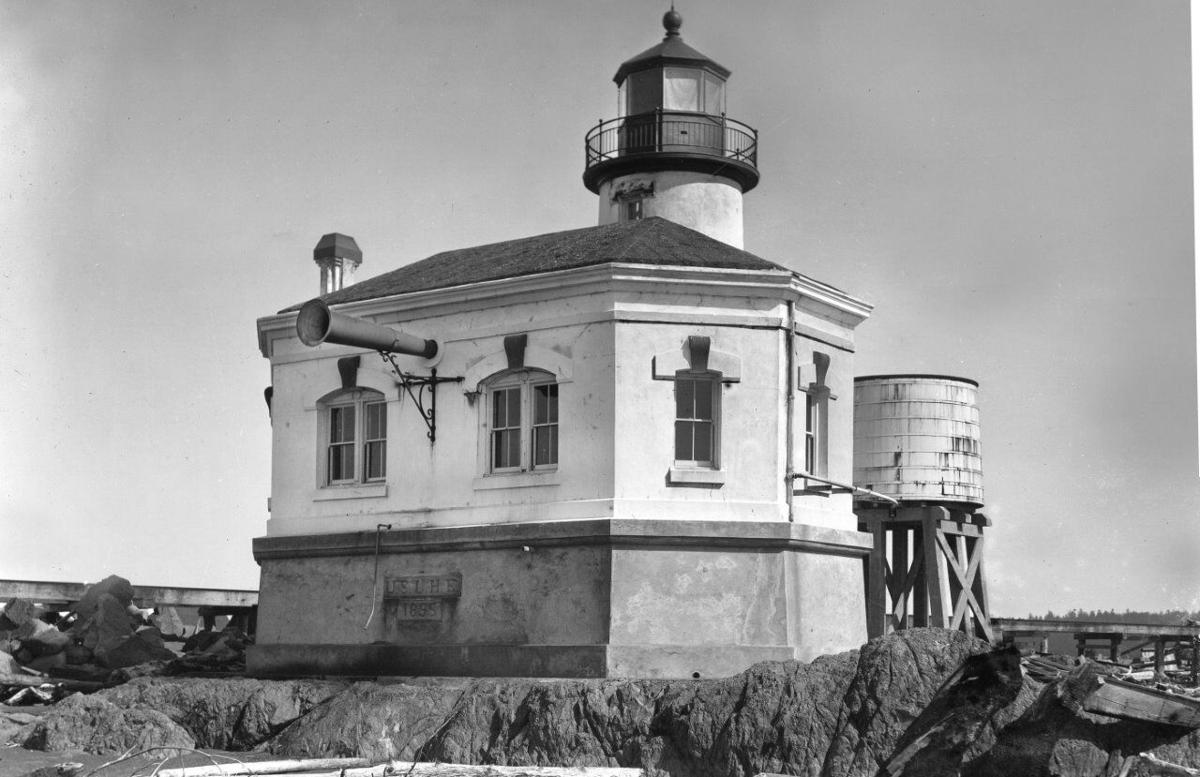 The Coquille River Lighthouse, which was built in 1895 and still stands. 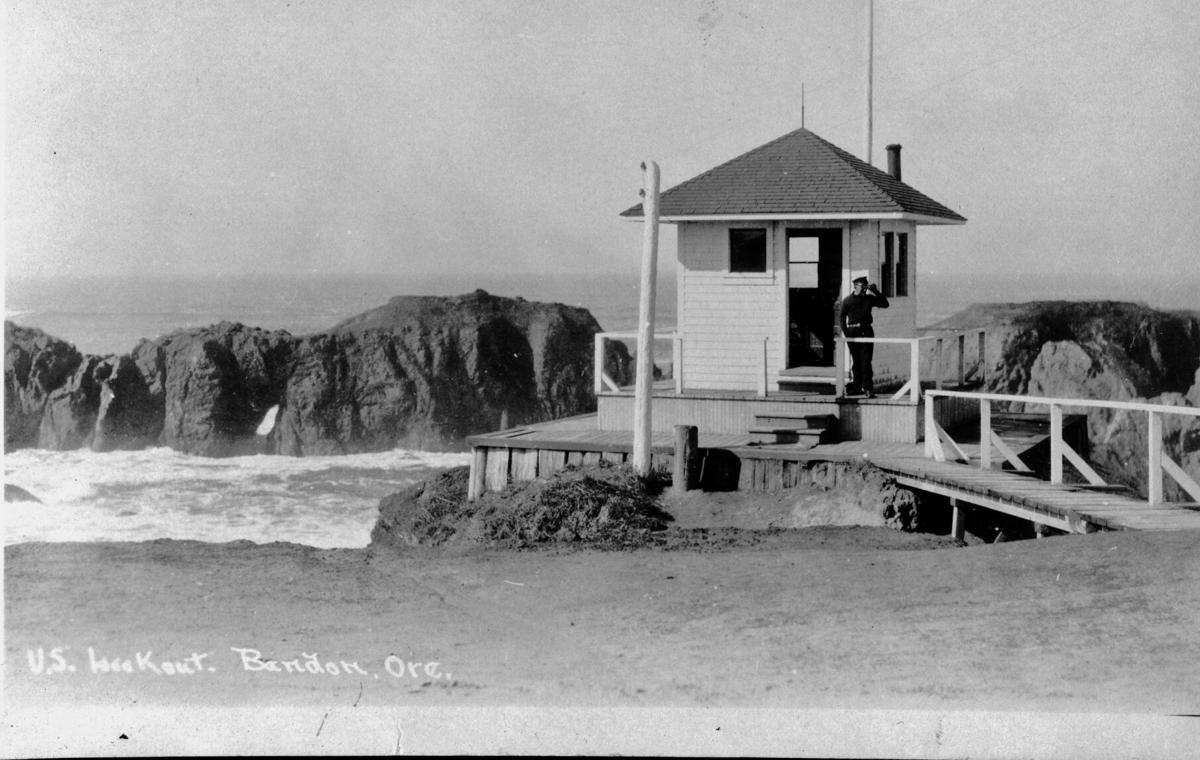 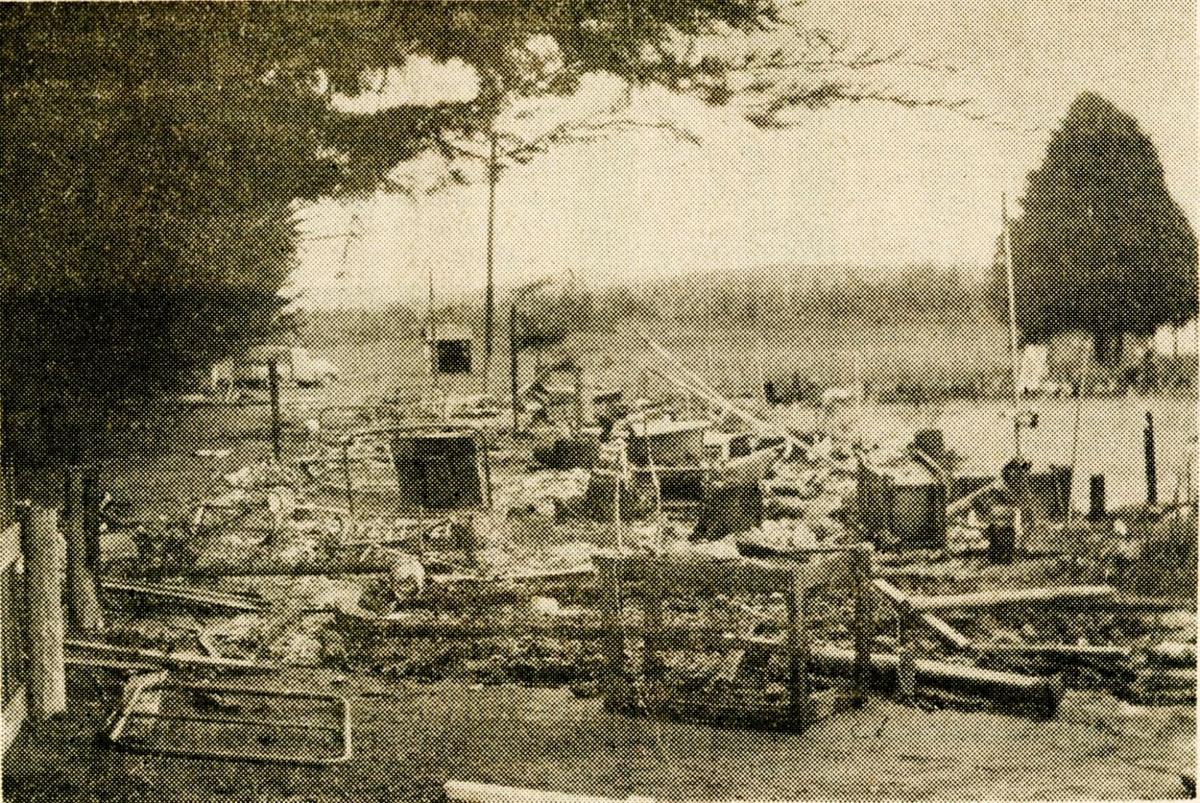 The aftermath of a 1949 fire at Dew Valley south of Bandon.

The Coquille River Lighthouse, which was built in 1895 and still stands.

The aftermath of a 1949 fire at Dew Valley south of Bandon.

I love this old picture of the Coquille River Lighthouse, which was built in 1895 and still stands today. But there was a move afoot in 1911 to have it relocated.

Here is what an article in the Aug. 8, 1911, Bandon Recorder had to say about the lighthouse.

"There has been considerable agitation to move the light house across the river to a point near the lookout and this proposition has the support of all the sea captains who come into this port. They say that the light house, where it now is, is a hindrance to coming in after night because the glaring light shines in their eyes, blinding them in a way that they cannot see the channel. Also it is impossible to see the light or hear the fog horn when approaching from the south, consequently the light house where it stands at present does not answer the purpose in any way. Whereas if it were on the hill near the lookout, it could be seen from all directions, and the cost of up keep would be reduced to practically nothing. Whereas it has cost nearly ten thousand dollars in the last few years where it now stands."

(Update: In the July 30, 1912, Recorder, I found a headline titled "Arc Lights on Jetty Big Help to Mariners." Here's what the article said: "Lighted by a system of electric arcs recently established on the Coquille by the city of Bandon, and maintained by the municipality, the matter of taking a vessel into the Coquille River at night, has been made comparatively easy, according to Captain Levi Snyder, master of the gasoline schooner Anvil. About a dozen arc lights have been placed on the jetty. The string of electric lights extended on down to the city and it was like going along a well-lighted street, according to the captain.)

The lookout referred to was the U.S. Live Saving lookout on Coquille Point, featured in the second photo, which was located at the end of 11th Street. Not only did the Life Saving unit have a boat at their station at the west end of First Street, but there was also a boathouse directly below the lookout toward the mouth of the river which housed a surfboat, breeches buoy, life preservers and other equipment. This was often used in case the bar was too rough for the power boat to cross.

The third picture I am sharing this week was taken in December of 1949 when a fire south of town at Dew Valley left 21 people homeless. All 10 units of the Dew Valley auto court burned to the ground. It was located about five miles south of town, across the highway from the Dew Valley clubhouse. I am guessing that it was situated where the Misty Meadows complex is now.

The only casualty was a little dog that was trapped in the cabin where the fire started. H.H. Hugh, manager of the court, was knocked down on the porch by a blast of flames as he opened the door to go after the dog.

The blaze, of undetermined origin, was discovered about 8:30 p.m. as flames broke through the roof of cabin No. 1 at the south end of the L-shaped court. Seven of the 10 units were occupied, and only a few blankets and other personal effects were saved.

The court was owned by Mrs. Ellen Tregonning of Bandon. The store and service station, situated near the court, were saved through efforts of members of the Bandon fire department who wet down the building with hoses until the fire truck's water supply was used up. Among those who lived at the court were Mr. and Mrs. Lawrence Stiltner, Mr. and Mrs. Cecil Young and Mr. and Mrs. Arthur Foster. The men in the families worked in three mills in the area, including the S.R. tie mill, the Carl Bowman mill and Schonfield mill.

"After the fire broke out Saturday night, a dance beginning at the Dew Valley clubhouse across the highway was called off. Instead of holding a dance Mr. and Mrs. Andy Anderson, Speed Anderson, Mr. and Mrs. S.W. Brown and daughter, Del, pitched in to serve hot coffee for the fire refugees, care for the children and provide a warm shelter," according to the article.

It was said to be the worst fire in the area since the Bandon Fire of 1936.

I was sorry to learn of the passing of former Frank C. High Medal of Honor VFW Post 3440 Commander Royce Kelley, who died Jan. 15. Royce and his wife, Deborah, were such big ambassadors for the VFW and were always so welcoming when I would visit the Post. He was a true gentleman, and a real patriot.

I saw a post on Susie Korenko Jones' Facebook page that her step-son, David McMahon (son of John McMahon), had died in a car accident last week on his way to visit Susie and his sister, Ashley Newell. David was in his mid-40s. Susie and David had talked on the phone for an hour before he left on his trip to Bandon, and they were all looking forward to his visit. He had many relatives here, and it is so sad.

People are reminded that their stimulus check may be coming in the mail in the form of a debit card. It looks just like one of the many credit-card offers that we regularly receive in the mail, so be sure and look at it carefully before throwing it away. Because it might really be your $600 stimulus check as I know at least three people who have received one of the debit cards. Another friend received hers through direct deposit in her bank account.

It's too bad the government did not let people know that they could come in the mail as a debit card, or maybe they did, and I just missed it.

I was afraid it was coming. Coos County's restaurants, bars and gyms are once again closed because the county has been moved back into the Extreme Risk category, which means our Covid-19 case load exceeded the equivalent of 200 cases per 100,000 population.

It has been shown pretty conclusively that the majority of the new cases come from unrestricted social gatherings and congregate care facilities. Not restaurants, bars and gyms, who now must close to indoor seating and indoor workouts.

A case in point: The Coos Bay Life Care Center has recorded 81 cases of Covid and seven of the county's 14 deaths, while Bob Belloni Boys Ranch has accounted for 27 cases and one death.

But it's our local businesses that pay the price. And they are the ones who have gone the extra mile to conform to the social distance restrictions, strict cleaning regimens, and the pared-down occupancy restrictions.

Too often it seems that common sense takes a back seat to a matrix system that does not account for where the cases are coming from ... and it should.

The Oregonian had a timely editorial in Sunday's paper, expressing the frustrations felt by so many Portland business people, who have been the target of repeated acts of vandalism.

As the writer put it, "Portland vandalism reports are up nearly 50 percent and many other property crimes are spiking amid an unchecked crime wave that is unnerving the city's businesses and prompting some to consider walking away."

"Downtown Portland business owners have been complaining for months about a sharp uptick in vandalism and other crimes, often committed by people who have used protests for racial justice for cover. Portland Mayor Ted Wheeler promised to take a tougher stance on vandalism after more than a dozen businesses and buildings were damaged during back-to-back nights heading into the New Year, but admitted this week that the city and police are ill-equipped to crack down on the criminal destruction."

Among those businesses that have been repeatedly vandalized are restaurants, who are already facing hardship and possible permanent closure because of the pandemic.

And you wonder why business owners and Portlanders in general are losing hope?

And it's not just one group that is causing havoc in Portland.

For example, the new Portland city commissioner (councilor) Dan Ryan, has had his home vandalized seven times by the group of people who are protesting his vote NOT to further defund the Portland Police Department. He has refused to go along with black activist and fellow city commissioner Joanne Hardesty, who is determined to defund the Portland police (at a time when crime is rising exponentially).

The same group of "social justice" activists occupied the three block area around the "red house on Mississippi Street," protesting the eviction of a black and indigenous family, who had missed 17 mortgage payments, moved to another home and the house had been sold to a man who agreed to sell it back for what he had paid for it.

Then there is the group of vandals, basically opportunists tied to neither political party, who are taking advantage of peaceful protests to vandalize, loot and burn other people's property.

Then there are the Proud Boys and Patriot Prayer groups, comprised almost entirely of white males, who took part in the riot at the US Capitol, converged on the state capitol in Salem and are often seen as counter-protesters in Portland and Seattle gatherings that often turn violent.

There is enough blame to go around ... for extremists in both political parties.