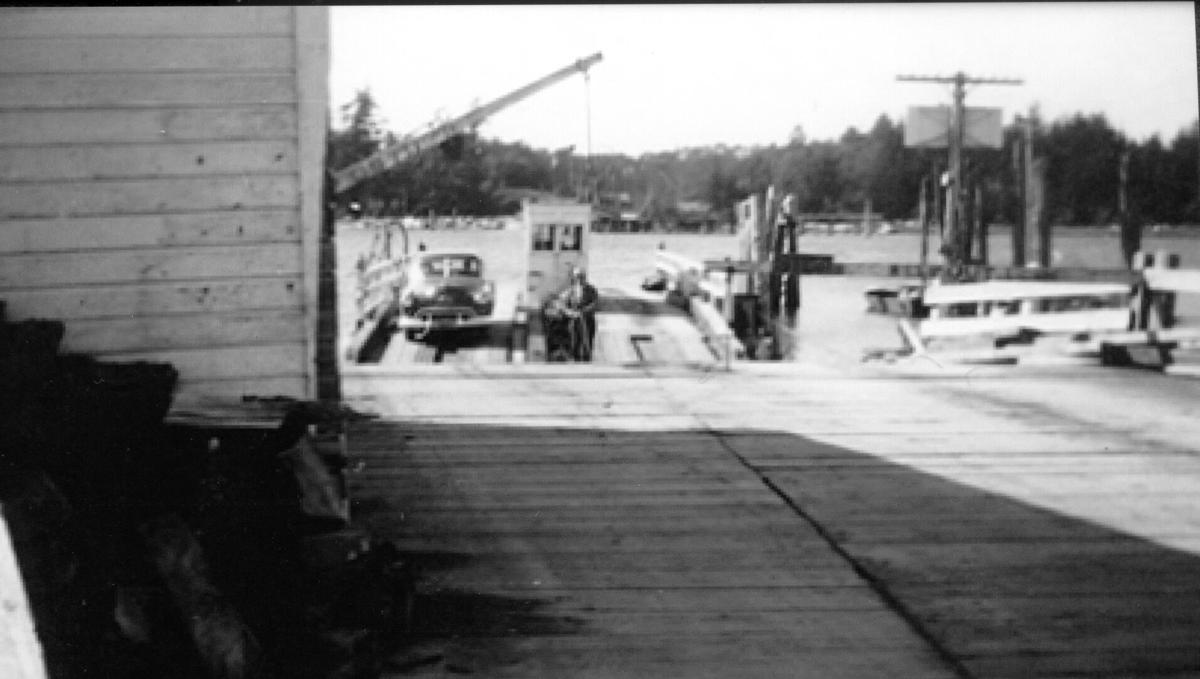 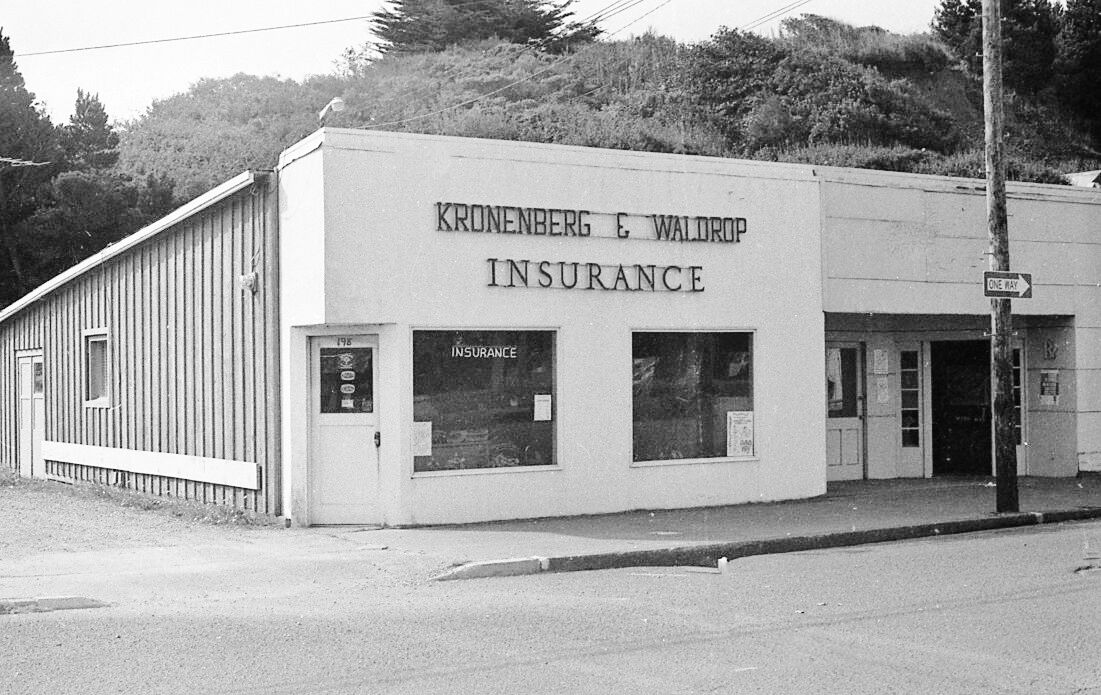 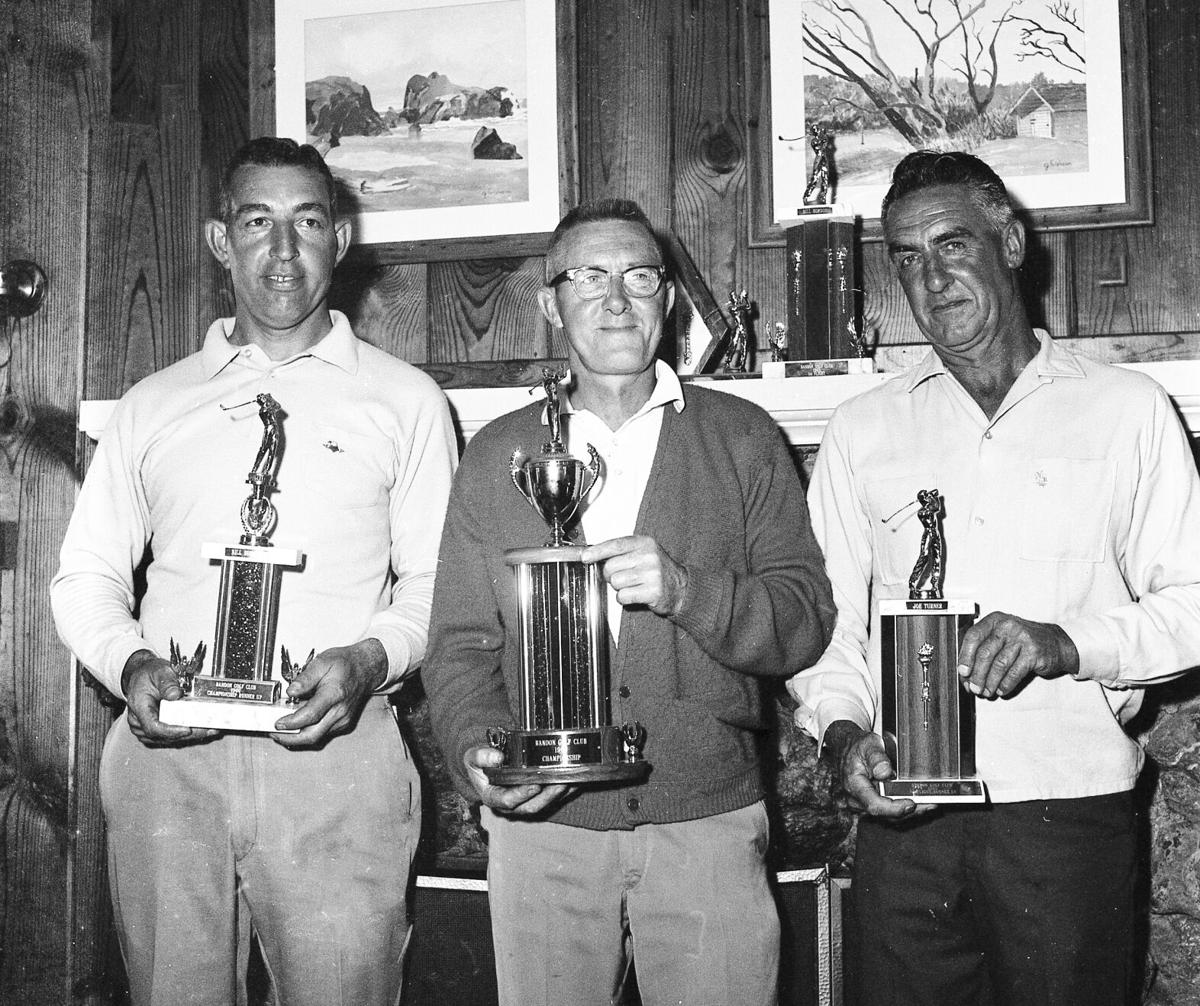 The first picture I am sharing this week comes from a small snapshot so it's pretty blurry, but it more closely depicts what it was like to ride across the Coquille River on the Bullards Ferry.

People who lived across the river had to depend on the Ferry to get "to town," but unfortunately it wasn't always available when they needed it, and that is what prompted the front-page Western World article of Oct. 16, 1941, headlined "Bullards Ferry Seen as Local Bottleneck to Lower River Folks."

"Although the people of the Bullards area have commercial, social, educational and religious interests identical with the people of the Bandon area, they are restricted in their opportunity for intercourse by limited ferry service. And vice versa, Bandon people who have interests on the Bullards side of the river must likewise time their activities to suit the restricted schedule of the ferry service.

"Acting upon the assumption that a bridge might be inopportune at this time of high prices and shortage of materials due to the defense program, the people of the lower river are preparing to ask the county budget committee to provide means for 24-hour ferry service. A petition is being circulated at this time."

I do think the ferry operated 24 hours a day for a few years, and I do know that it was 13 more long years before the new Bullards Bridge officially opened on April 1, 1954. The ferry had been operating for 45 years, having begun in 1909.

The bridge was financed by federal, state and county funds. The county's share was financed by a $300,000 bond issue, which was estimated at the time that it would be repaid in 20 years from savings realized by discontinuance of the county-owned ferry.

Regarding the second photo, I knew that the Gant Brothers (operated by Elmer) had a clothing store on Second Street after the fire, but I was never exactly clear where it was located, until I found an item in the July 17, 1941, Western World.

The article described what was taking place at the Bandon Medical Center building, which housed Fuhrman & Shindler drug store, and the offices of Dr. E.F. Lucas and Dr. Floyd Dodds. (Today that building is occupied by Winter River Books.)

"The new building, with an attractive front, will remain of one-story construction, but will include the Elmer Gant clothing store and the medical and dental offices. (The picture that I have shared of what was then Kronenberg & Waldrop Insurance was the spot that Elmer's clothing store occupied in 1941. Today it is the home of Sassy Seagull.)

The photo I am sharing was taken later, probably in the early '60s, but it clearly shows the part of the building where Gant's clothing store was located as well as the alcove and the doors leading into the pharmacy and the doctors' offices.

The article ends by saying that the concrete sidewalk in front of the building, which was badly damaged by the fire of 1936, will be torn up and replaced. In case this isn't clear, it was the sidewalk that was damaged. The buildings on that street, except for the concrete First National Bank (now Masonic) building, were destroyed.

According to my extensive research, which involved poring through hundreds of pages of old Western Worlds, Gant Bros, Inc. (which included Elmer and O.T.) opened a store in Bandon in the summer of 1928.

In March of 1932, an article indicates that Elmer Gant had opened a new store in the Bandon Medical Building on First street, under the name of Elmer Gant, the Clothier. He is quoted as saying that "the new enterprise has no connection whatever with the former one."

So before the Fire, Elmer's business was on First Street; after the Fire, he was on Second Street. It appears that he may have gone out of business in December of 1943. He was in the cranberry business for many years.

The third picture was taken in July of 1966 when the winners of the club championship at the Westmost Golf Course celebrated at the clubhouse. The club champion was Ray Baird, center; runner-up was Bill Burgher, at left, while Joe Turner was runner up for the first flight. Not pictured was Bill Hopson, first-flight champion.

I love this photo for another reason: the two watercolors on the walls of the clubhouse were painted by my grandmother, Grace Felsheim, an ardent golfer. Four years earlier, in 1962, my beloved grandfather, L.D. Felsheim, had died on the golf course after suffering a heart attack while climbing the hill to reach the 9th green.

Tony Chatman, spokesman for CERT, wanted me to let readers know that he will be distributing free N-95 masks and hand sanitizer to residents and businesses during January, while supplies last. He said he would be setting up a trailer at either McKay's or Ray's, and he will post on Facebook when he will be there so people can stop by.

Former Bandon teacher and long-time resident Jim Curran was honored on his 96th birthday last Monday with a drive-by party in Coquille, where he now makes his home. His daughter-in-law, Patti Curran, posted a neat video that showed the many cars driving by to wish their favorite teacher good wishes on his birthday.

Jim and his late wife Flo were big supporters of our museum, and Jim never missed a Bandon Fire program and the opportunity to share his story of being a 12-year-old paper boy in Coos Bay at the time of the fire.

I didn't know about his party until after it was too late to make it to Coquille, but I have talked on the phone with him recently, and I do know how much he misses being around people, so I am sure the party gave him a big boost.

Rainfall for December was 9.83 inches, compared to 12.01 inches in November.

I was glad to learn that the board of the Southern Coos Health District had recently given Eugene F. Suksi, who had been serving as interim CEO, a three-year contract.

I met him not long after he arrived here, and was impressed with his knowledge of the health care industry. I am glad to hear that he is no longer the interim ... and that they would not be going through another CEO search.