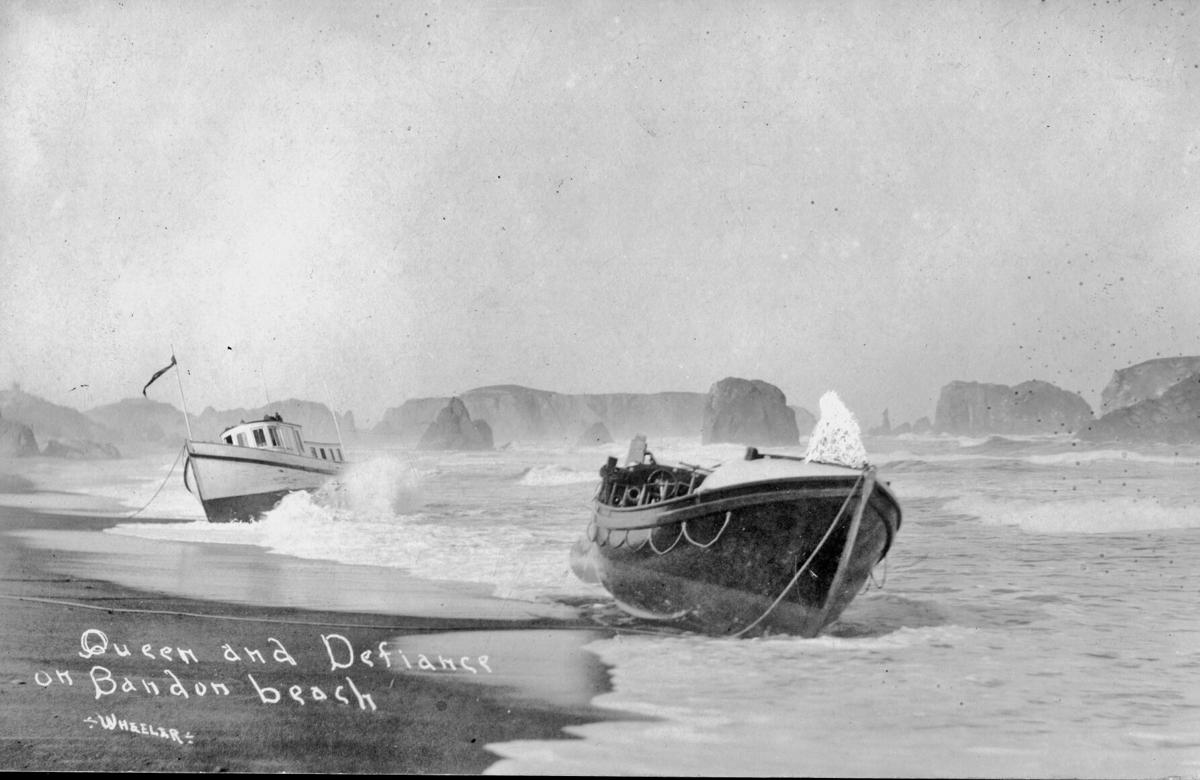 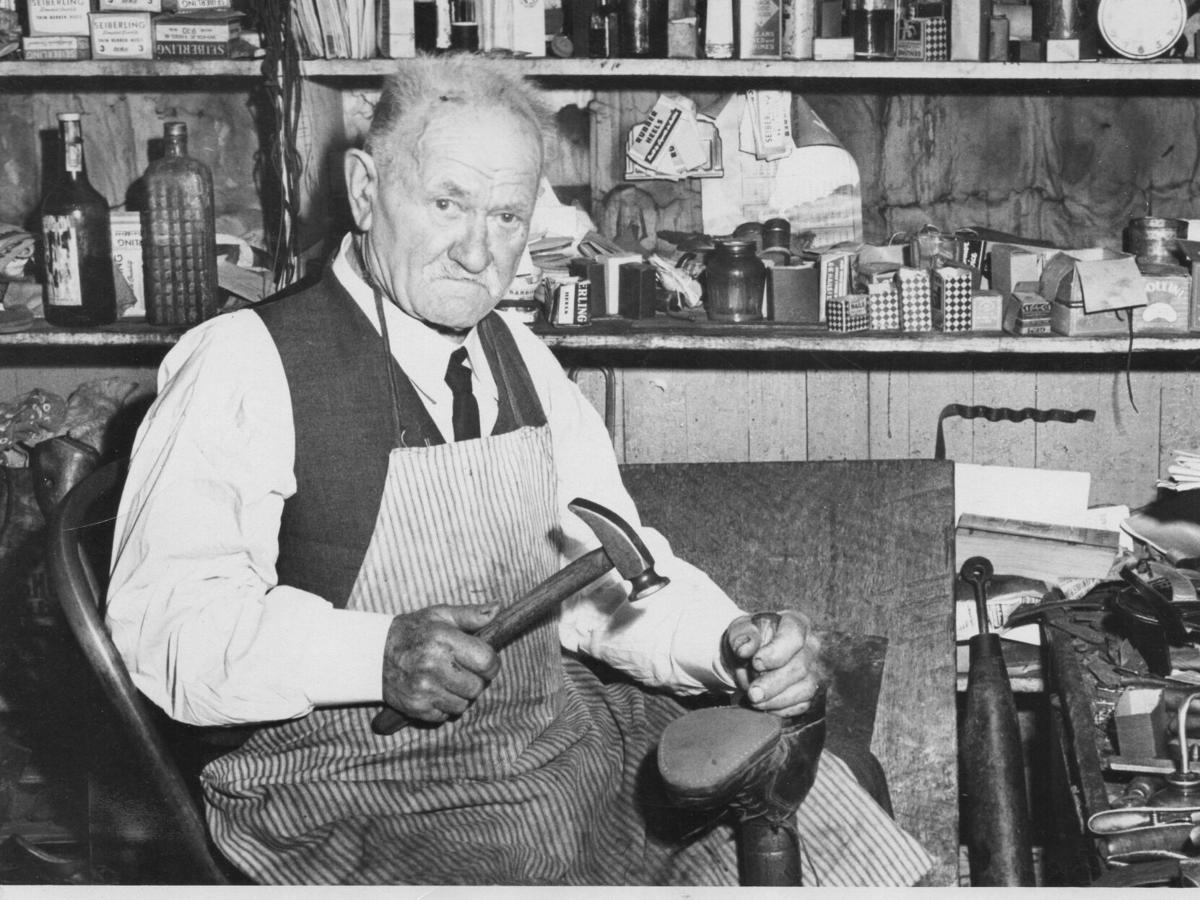 Bandon businessman Mike Breuer was instrumental in the creation of the city's first library. 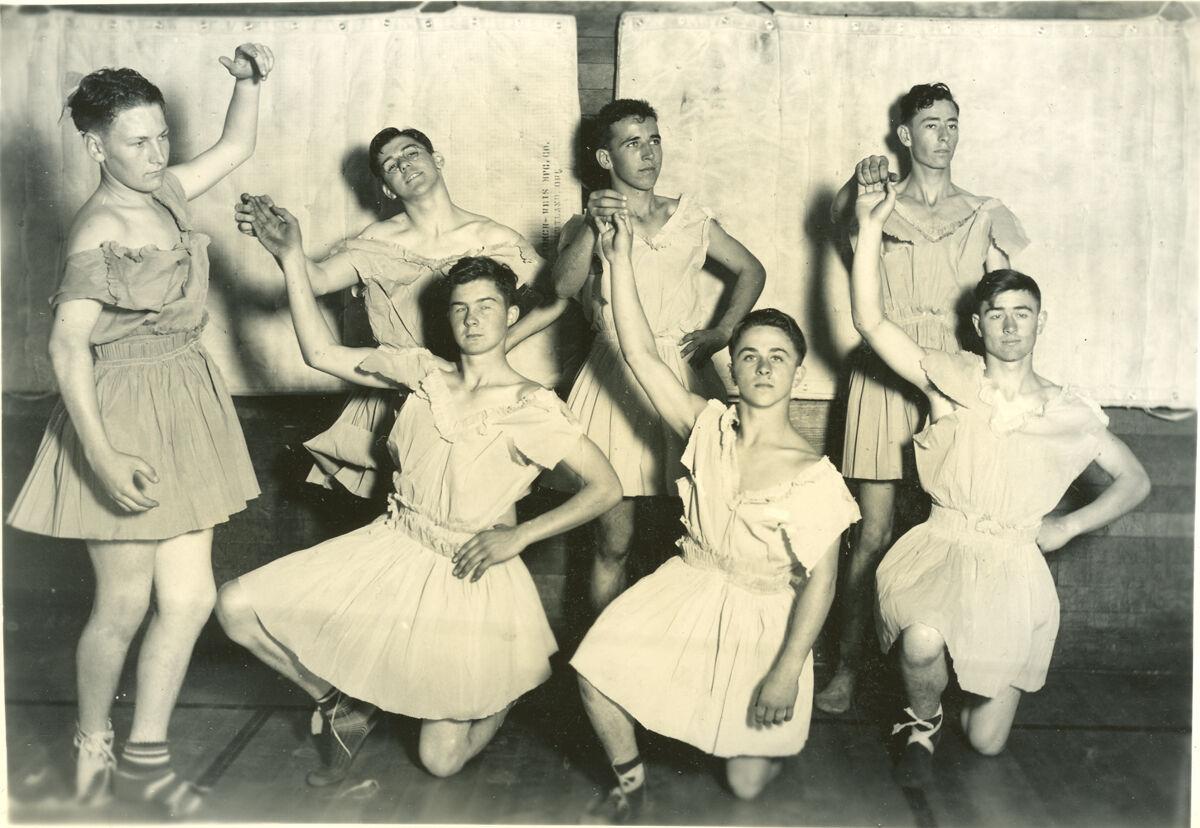 Members of the Bandon High School class of 1941.

Bandon businessman Mike Breuer was instrumental in the creation of the city's first library.

Members of the Bandon High School class of 1941.

I've had the postcard of the first picture I am sharing for a long time, but I had not been able to find any information about it. I knew it was taken on the beach just south of the South Jetty and all I could think of was what it would have been like to drive down to the jetty and see these two vessels in the surf.

Tonight, I found the story in H.S. Contino's book "Shipwrecks of Coos County," and I will share it with my readers.

"Sometimes rescue operations do not go according to plan. Such was the case on July 16, 1914. The trouble began when the 43-foot gas boat Queen (at left) encountered rough seas while attempting to cross the Coquille River bar. The vessel was struck by an enormous wave that smashed the window in its wheelhouse and flooded the engine room. Although the stalled motor was successfully restarted, a line on the deck that had been washed overboard  became tangled in the propeller. Capt. Hark Dunham sent out a distress call that was answered by the U.S. Life-Saving crew. They arrived on the scene with their power lifeboat, the Defiance, and attempted to tow the disabled Queen back to port. However, as the two vessels approached the Coquille River jetties, they were struck by several large waves. While the two boats struggled to remain upright, the towline managed to get tangled up in the Defiance's propeller. With both engines disabled, the life-saving crew tried without success to tow the boats to safety. Both vessels drifted south where they washed ashore."

It is interesting as my postcard appears to have been doctored. In the exact same photo in the Contino book, there is a man standing on the bow of the lifeboat; in my picture he has been erased and only a white blur remains, almost like a wave breaking over the bow.

I know I have shared this second picture of shoemaker and businessman Mike Breuer in the past, but the story of how he founded the first library here is something I just discovered in a 1945 issue of Western World.

"Mr. Breuer was instrumental in establishing the first free public library in Bandon back in 1905.

"A fleet of some 30 small sailing schooners carried lumber and coal from the lower Coquille River to San Francisco. Members of the crews were often forced to remain here weeks at a time before weather conditions permitted them to sail. There was no place for them to find entertainment or relaxation except in the numerous saloons of that day. After their money was gone they soon wore out their welcome in those places and they were hopelessly stranded.

"Mr. Breuer conceived the idea that a reading room would add materially to the situation, so he, assisted by Mr. Chase, who at the time operated a woolen mill here, rented the lower part of a building adjoining the old Bank building the upper story of which was occupied by the Bandon Recorder, a weekly newspaper published by Mr. Stitt, grandfather of David Stitt of Langlois.

"Through the courtesy of Adam Pershbaker of Parkersburg they obtained lumber to construct shelving. They equipped the place with a number of good books, subscribed for two daily newspapers and some magazines. There was no librarian, but borrowers were put on their honor. As they took a book out they wrote their name and the name of the book on a slip of paper that hung on the wall.

"Mr. Breuer cut and conveyed wood from the beach to provide heat for the reading room, and his son, Victor, kept up the fire and did the janitor work."

Everything went well and the idle sailors enjoyed the place ..... until gradually it became apparent that books disappeared without any record.

"At any rate Mr. Breuer .... abandoned the project and gave the library to the school house on the hill, which building later became the Legion Hall."

The building the article refers to was the original school built in 1893 on the hill across from where the old Coast Guard station stands today.

I love this third picture taken in 1940 of a group of students, who were members of the BHS Class of 1941. I can identify the four men in front, but not the three in back. In front, from left, are Harold Howe, Don Goddard, Vernon Barrows and my uncle, Lou Felsheim, posing as ballet dancers, apparently for some kind of school fundraiser.

Edith Winters still lives in Bandon today, at the tender age of 97.

First of all I want to thank everyone who supported me in my successful re-election for mayor. For those of you who have not seen the results, I polled 1,059 votes compared to my opponent who received 756 votes. Although more votes were cast in 2020 than in 2006 when she last ran against me, the margin of victory was similar. The first time I received 742 votes and she had 505.  It's hard to know what more I can say than just "thank you."

I was also happy that voters returned our two incumbent city councilors, Brian Vick and Geri Procetto, as well as newcomer Patrick Salandro, who will be a great addition to the council. He's already shown he's willing to be part of the solution, as he is on both the city's parks and recreation commission and the planning commission.

While having coffee at the bakery Saturday, a woman stopped by and handed me the city newsletter, on which she had circled some of the information (most particularly the part about the contributions to the county made by the Bandon Dunes Golf Resort, which had originally been in my column and then in the newsletter).

Under suggestions as to what she should do with the old golf course property, she added; "Build housing. Desperately needed and a continuous source of income that can increase."

She also circled the part about the city receiving more in TOT tax than in property tax revenue and added the word "Wow!"

At the bottom she wrote: "These notices are just excellent plus they keep 'unconnected' people like myself in the loop."

I certainly appreciate her comments and hope that everyone who receives a city utility bill takes the time to read the newsletter that accompanies it. It is one way of reaching our constituents.

I was sorry to learn this week of the death of one of my 1957 BHS classmates, Colleen Colgrove Melhorn.

I know Colleen had lived in Newport for many years and often came to our class reunions. Among her survivors is her younger sister, Paula.

Colleen and I were born three days apart, me on Aug. 5, 1939, and she on Aug. 8, so our mothers were in Leep Memorial Hospital at the same time. Colleen's mother, Hazel Colgrove, was well known in Bandon and for years had Hazel's Antiques, first in the building which now houses Bandon Baking Co. and later in her house on Beach Loop Road just north of Sunset Motel and Lord Bennett's Restaurant.

Colleen was also a Cranberry Queen and if I am not mistaken she either won the Miss Coos County contest or at least was a finalist.