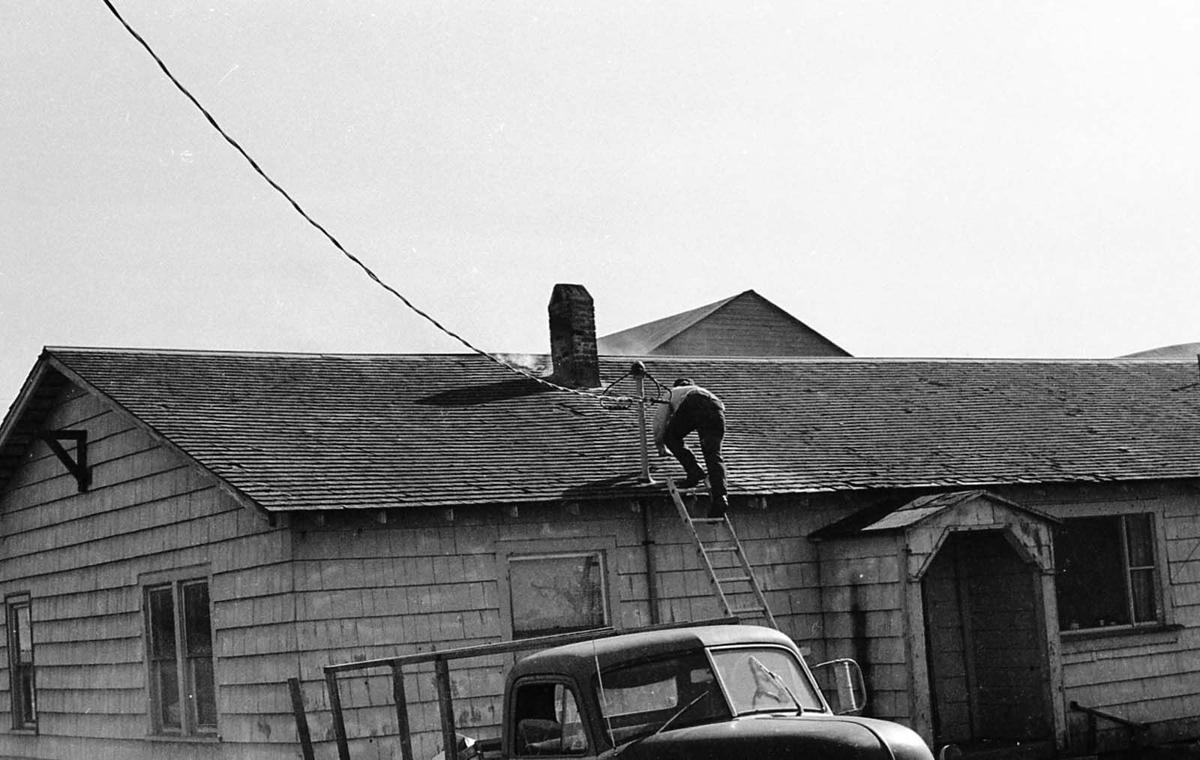 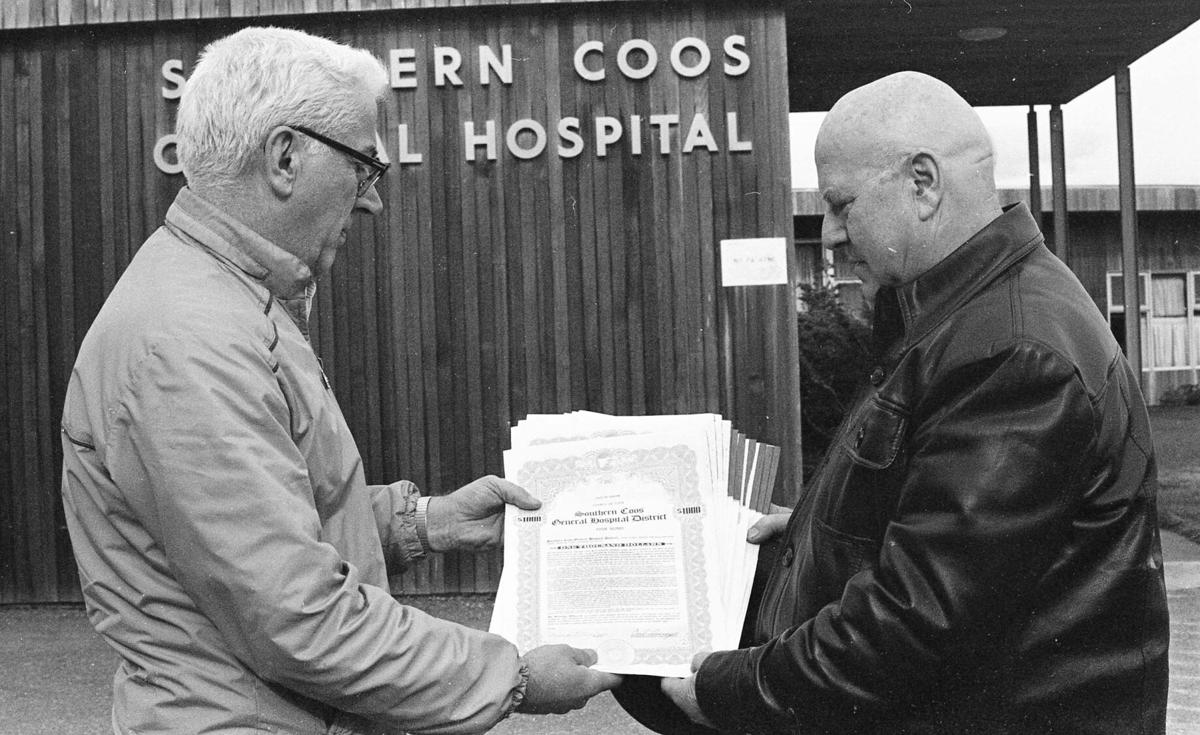 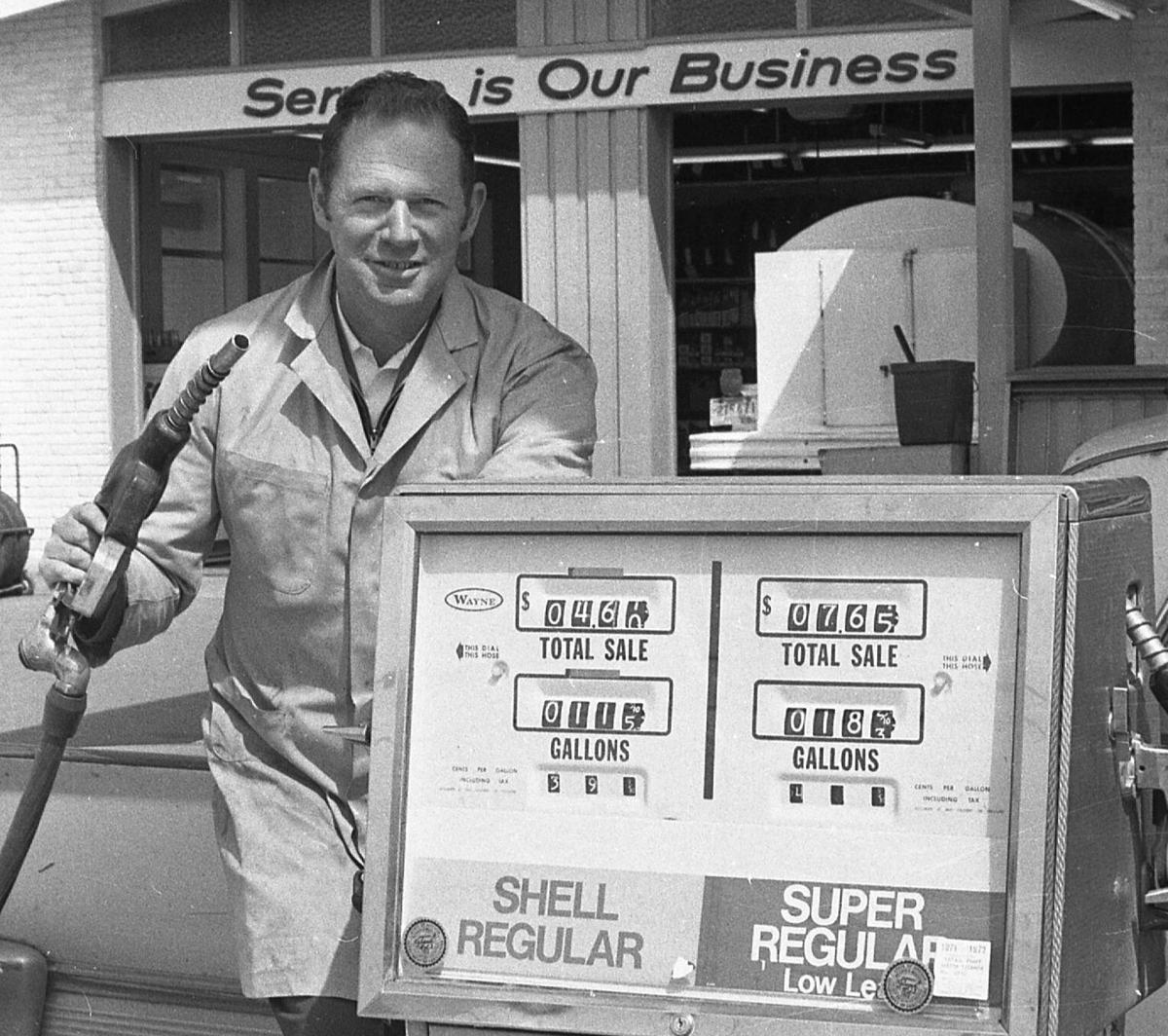 The first picture I am sharing this week is the former Leep Memorial Hospital building on First Street, which had been abandoned for a number of years before the first "new" hospital was built on the hill off Ocean Drive overlooking the river and the lighthouse, which opened in 1960. It was later replaced by the existing hospital at the east end of 11th Street. This picture was taken in the '70s during a fire in the attic, when it was being used as a personal residence.

The building in the photo was originally built by the Red Cross after they came into Bandon to provide services as a result of the Bandon Fire of 1936. It opened as a hospital in 1937, and that is where I was born in August of 1939.

But by 1946, problems surfaced, which included a shortage of nurses and a report by the fire marshal on the safety of the building.

At a community meeting in October of 1946, R.V. Leep Memorial Hospital Association secretary Merritt J. Senter explained that the 10 beds, including four in the maternity ward, were not enough to serve the needs of the community and surrounding area.

The board agreed that it was necessary that a new hospital be built, especially since it was operating under a temporary permit from the fire marshal because of the serious fire hazards at the present location.

Several months earlier, the Leep board had accepted the donation of a large piece of property, known as the Boak property, donated to the district by the city of Bandon, deemed suitable for the new hospital and additional buildings that might be added in the future.

In August of 1946, an item in Western World said "Tuesday was record day at the small local hospital, when Nurse Donley reported 15 patients and 7 babies under her care." One of those babies was Charles Gregory Crew, born to Mr. and Mrs. Charlie Crew.

But a few short months later, in October of 1946, it was announced that the hospital would not accept patients after Nov. 2 as it would close for a week to give Nurse Donley a much-needed rest. She has been the only registered nurse working permanently at the hospital, and the nurses - mostly high school girls - as well as the practical nurses have been on a temporary basis.

A spokesman for the district added: "Looking closer at the picture, and the operation of the present hospital, the Board has been wondering if a new hospital is what the community and the surrounding area really wants. Nurses are badly needed - particularly registered nurses. There is no use to contemplate a new one unless we can staff our present hospital, and it would appear that it is up to us, here at home, to staff the place because in attempting to secure registered nurses elsewhere we are informed that the same shortage exists in other places, too."

Ironically, some 75 years later, the same problem exists when it comes to hiring permanent RNs.

Thus began the years-long journey toward the new hospital, with bonds to finance it being approved and sold in 1958, and the hospital finally opening for patients in 1960. What transpired and how the district was held up in court by a group of local residents is a story for another day.

The second photo taken in April of 1978 in front of what was then the "new" Southern Coos General Hospital shows administrator George Barnes, left, and hospital board chairman Melvin Boak, right, documenting the final payment to Western Bank on the $203,000 bond issue that helped finance the construction of the hospital.

The Southern Coos General Hospital District was organized on July 27, 1955, for the purpose of providing modern hospital facilities for residents of the area. The first board of directors consisted of Carl Lorenz, Nyna Miller, James Raines, Theresa Devereux and John Fetterman.

I have learned of the deaths of two former residents and one local man in the last week.

Chris Kappos, a long time Bandon resident, died recently in California. Chris first came to Bandon to work on a project in Prosper in the 1970s known as Prosper Development. It was here that he met, fell in love with and married Deneice (Denny). He joined her business, Bandon Realty.

They were both very involved in the community, including the Bandon Lions Club and the chamber of commerce, before retiring to Palm Desert, Calif.

Sunday morning, Jim Quinn of Bandon died after a lingering illness. Jim, who would have celebrated his 80th birthday June 14, owned Bandon By The Sea Park & Sell, which was located south of town adjacent to the former Larry's Express Lube business. He specialized in Corvettes and other vintage autos. Among his survivors is his partner Carol Lee Tavtigian.

Sheila was a native of Brooklyn, N.Y.  and was a former teaching assistant at Adelphi University in Garden City, N.Y.

Sheila had many Bandon friends, loved the arts and was active in trying to bring a swimming pool to Bandon. She had returned to New York a year ago to make her home.

It took several weeks to get the results, but I learned this week that I had been elected as a write-in candidate to the hospital board, effective July 1. I received 394 votes, compared to 118 for Laurea Arnoldt and 38 for Barbara Snyder. Carma Erickson-Hurt received 7, Jennifer Schulz 6 and Rodney Taylor received 5 votes. Another 98 people received three or less for the total write-ins of 664 votes.

After listening to a recording of the May 27th board meeting, I am anxious to get sworn in. I heard one of the relatively new board members make some allegations against the administration that I found way out of line in a public meeting. It did not appear that the board member had talked to the CEO about the charges that he was making, which resulted in a call for an outside investigation.

I will be extremely interested in receiving a copy of the hospital's bylaws and policies that should govern how personnel issues are handled. It may be completely different than in the municipal setting that I am familiar with, but I doubt it.

I will say that I was impressed with a number of positive reports that were presented by hospital staff, including the CFO Jeremiah Dodrill, a graduate of BHS and the son of Walt and Sue Dodrill and grandson of Barbara Dodrill.

I have seen so little in the news about the one-time mayor of Cornelius, Ore., Ralph Brown, who walked out of his home more than three weeks ago, got into his vehicle and drove away. And now he's missing.

Family and friends say the 76-year-old man suffered from dementia and had not been driving for over a year. But he apparently got into the family car, a 2014 dark blue Nissan Sentra (license number 319KQV) and drove away. His family tried to call his cell phone over and over, and one time the night that he went missing (May 16) he did answer and told his daughter he was in the woods near a golf course and he said he knew they would be coming to look for him. But that was the last time he responded to their calls, and he has not used his credit card.

There is no way of knowing where Mr. Brown has gone. He grew up in the Seaside area, and they have searched there, but found no trace of him.

He is a former school principal in Hillsboro, in addition to having served as mayor of Cornelius in the '80s.

Learning yesterday that he still has not been found .... but not because I saw anything in the news but because I did a Google search, I decided it was time to alert people to be on the lookout for him. Hopefully police agencies across the state have him in their database.

Praying the outcome will be as positive as that of the 69-year-old Roseburg man, Harry Burleigh, who was found alive in the Toketee wilderness several weeks ago after being missing for 17 days.

In his case, searchers found evidence of a makeshift shelter about 10 days into the search, but he was no longer there. Family and friends left food, matches and notes for him and told him searchers were looking for him. On day 17, they found him in another shelter. Although he was weak, he was able to walk to a waiting helicopter, which took him to the hospital in Eugene for evaluation.

U.S. employers could require all workers physically entering a workplace to be vaccinated, the federal government said recently. The Equal Employment Opportunity Commission issued updated guidance stating that federal laws don't prevent an employer from requiring workers to be vaccinated. However, in some circumstances, federal law may require the employer to provide reasonable accommodations for employees who, because of a disability or a religious belief, aren't vaccinated. For example, The EEOS said as a reasonable accommodation, an unvaccinated employee entering the workplace might wear a face mask, work at a social distance or be given the opportunity to telework.

The new guidelines also say that federal laws don't prevent or limit incentives that can be offered to workers to voluntarily take the vaccine.

And employers that are administering vaccines to their employees may also offer incentives, as long as the incentives aren't coercive.

A good place to start may be the area's hospitals. It is unconscionable to think that people who work in a hospital, where vulnerable people are treated, do not have to be vaccinated. I do understand however, that unvaccinated people are required to wear a mask.

For anyone worrying about the forthcoming fire season, the latest rainfall information was not good news. The combined rainfall for April and May was 2.37 inches, with 0.83 recorded in May. That is lowest combined rainfall in the 17 years that my friend has been keeping a record. The highest total in that time period was April and May of 2017, when we recorded 15.78 inches of rain.

Fire season officially started Friday, June 4, and people are reminded that open burning is prohibited in the area covered by the Coos Forest Protective Association.