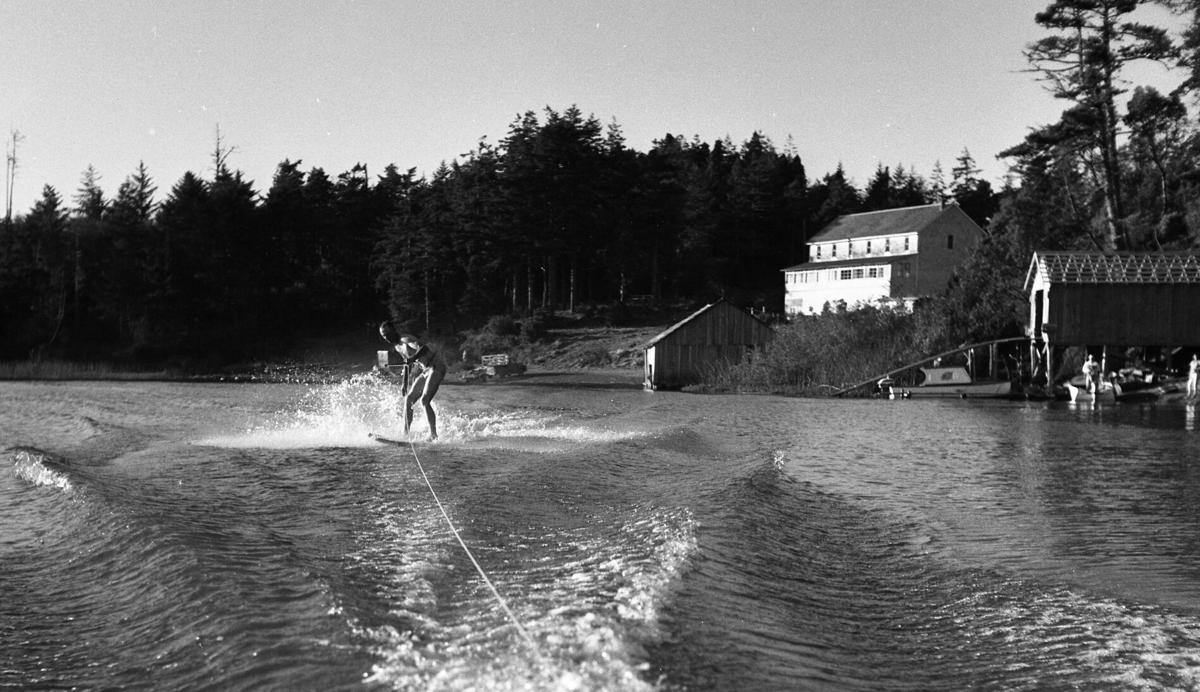 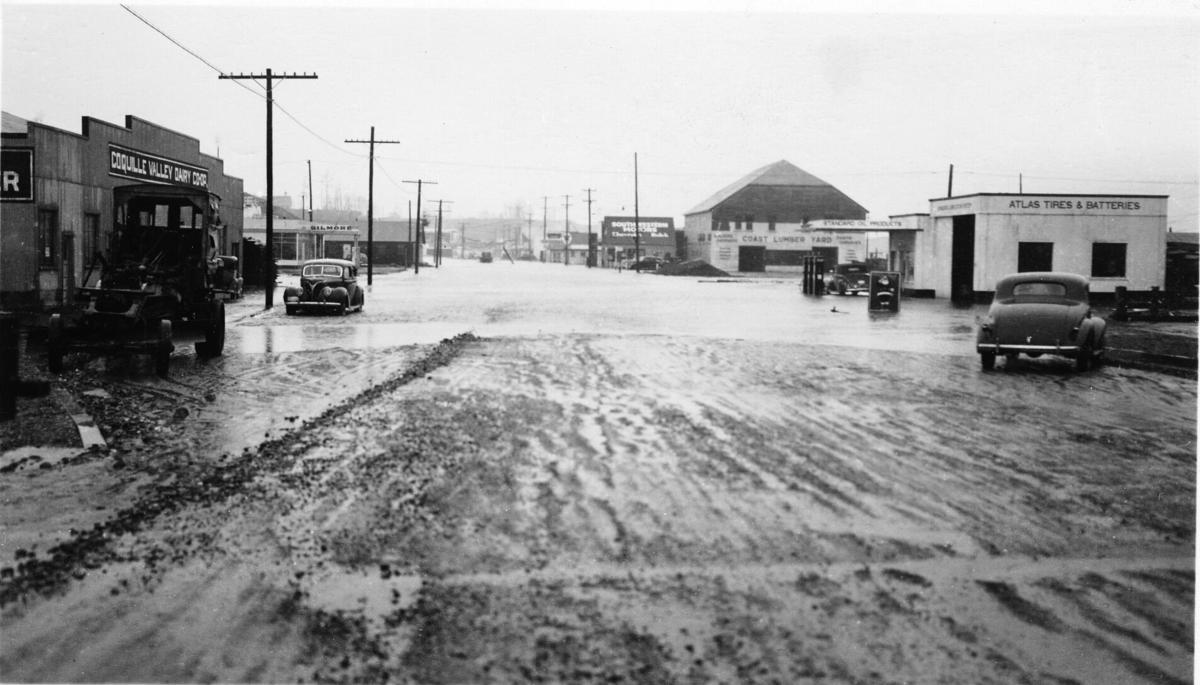 Ferry Creek overflows its banks in 1940, flooding a portion of Bandon. 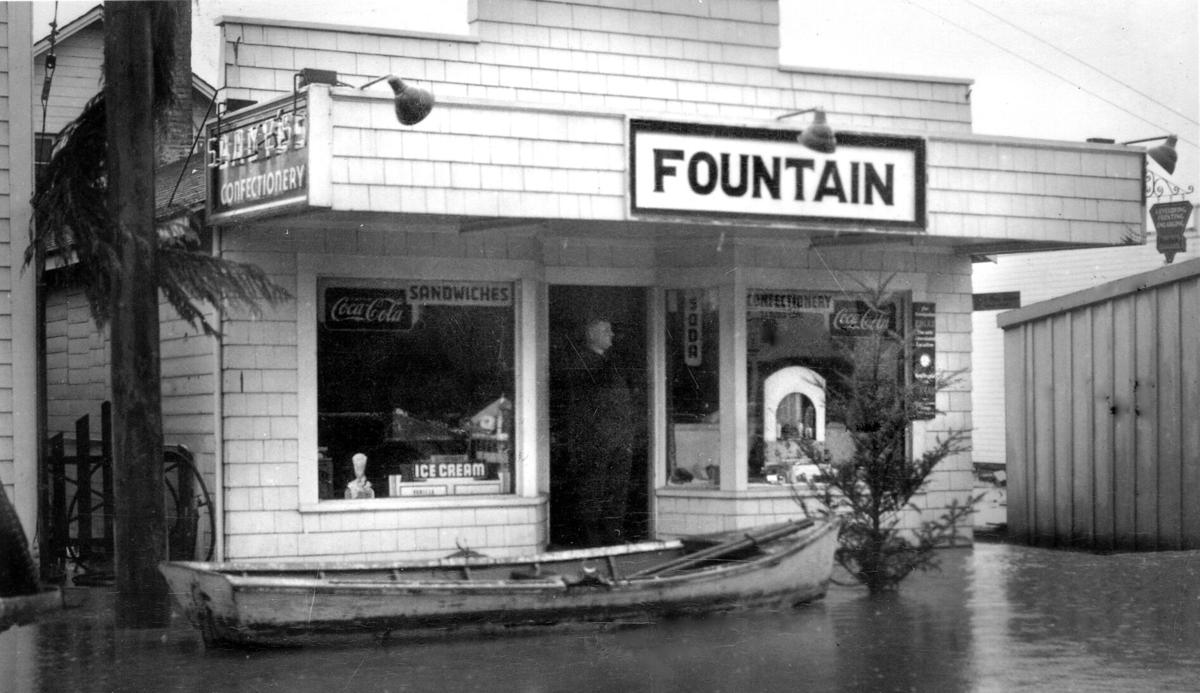 A rowboat sits outside the front door of Sadye's Confectionary, where sandbags kept water out during the flood.

Ferry Creek overflows its banks in 1940, flooding a portion of Bandon.

A rowboat sits outside the front door of Sadye's Confectionary, where sandbags kept water out during the flood.

The first picture I am sharing was taken during a fun day of water skiing on Floras Lake in 1958 by my late uncle, Lou Felsheim, who had a cabin on the lake. But I chose this picture because it is one of the best  pictures I have of the Floras Lake Resort, which is what my story is about.

In the April 24, 1930, issue of Western World I found the headline: "Floras Lake is Open to the Public," with the subhead: "Parties admitted free who don't use tables, wood or water."

It adds that "those using any of the above must pay a charge of 25c per car."

The article continues: "For those seeking rest and recreation Floras Lake Resort owners have provided well. There is a well equipped hotel building with appropriate dining room and dancing floor, and a wide veranda from which a wonderful view of a wide expanse of the lake is obtained. The hotel is known for its excellent dining, room services, everything served being prepared by experienced women cooks.

"An added attraction to individuals and families who want real home comforts while in the wilds is a number of very modernly furnished two-, three-, and four-room cabins, equipped with beds, linen, cooking utensils, baths, electricity, toilets and other conveniences, all facing on the lake front with a view of the wonderful lake which has over 25 miles of shore line.

"The lake, a fresh water body, empties into the ocean which, at the ocean front, is a bare hundred yards away. Here visitors disport themselves in the mighty Pacific, enjoy the surf, clam digging, sea fishing and other sports.

"The lake itself, with its wooded shores, is one of the scenic wonders of the West."

Judging from the photo, we know the lodge was still there in 1958, but I have no idea when it was torn down or stopped functioning as a resort. But it surely sounds like a real showplace, less than 15 miles south of Bandon near Langlois.

The second photo was taken in late December of 1940 when Ferry Creek overflowed its bank and flooded the east end of town. Pictured here, on the left, is the Coquille Valley Dairy Co-op (now the site of Face Rock Creamery), and across the highway, now a vacant lot, is the Standard Service Station, which was owned for many years by George Chappell.  West of the station, and across Fillmore Avenue, you can see the Coast Lumber Yard, which survived the Fire but finally fell into disrepair and was torn down many years later. West of the creamery was my dad's Gilmore Service Station, which is across Fillmore from what was then the city hall and is now the home of the Bandon Historical Society museum.

An article in the Jan. 2, 1941, Western World explains that because of several days of torrential rains, the water rose rapidly and within a short time formed a rushing river the full width of the highway toward the city hall. The water rose to a height of between 13 and 18 inches in places. It completely covered the floors in the Bob-Otto Court (site of the present Chevron station at Elmira and 101) where it also did considerable damage to the service station and the Greyhound bus depot, which were part of the Auto Court.

The third picture shows Sadye's Confectionary, the local soda fountain (now the home of Alloro Wine Bar) where the water was held from coming into the front door by sandbags. But note the rowboat in front of the door.

At the liquor store next door it flowed across the sidewalk and under the building.

"Water covered the floor of the new Bandon Theatre from the stage several rows back but this was largely due to the tide having backed up the water in the special drainage system maintained by the theater," explained the article. The theater was situated immediately west of what is now the Bandon Coffee Cafe.

City employees were finally able to cut ditches across First street between Elmira and Fillmore, to return the water to the river. At that outlet, the bulkhead that held the street fill had to be blasted with dynamite.

So how does our rainfall compare to what occurred 80 years ago. Gerry Terp, who sends me the rainfall data every month, said Bandon recorded 14.13 inches in January, just a little less than the 14.57 recorded in January of 2020 ... but more than double the rainfall for January of 2019, which was 6.79 inches.

I know that the question on most people's minds these days is how do I get the Covid-19 vaccine and where do I sign up.

I asked Frances Smith of Coos County Friends of Public Health and here is what she said:

"If you are already registered through the Coos Health and Wellness website (www.cooshealthandwellness.org) then the next step is to wait for an email. When the amount of vaccine that is shipped each week to Coos County is determined, and it varies, the vaccine committee (which consists of the organizations which are administering it: Coos Health & Wellness, Bay Area Hospital, Southern Coos Hospital, Coquille Valley Hospital, Coast Community Health Center and others) meet on Tuesday to determine how and where the vaccine will best be distributed that week, for example, based on who has the capacity to hold a clinic, or make appointments, and also they consider placing it in a different areas of the county.

"A person should register with the CHW website. When that person becomes eligible, based on age, employment, etc., he or she will receive an email telling where vaccine is being offered and the date if there is a mass clinic. There may be a link to make an appointment at CHW, or there could be information on how to sign up at Southern Coos Hospital or NBMC. So the person has to take that next step to make an appointment, and appointments are made on a first come first served basis. So watch for an email telling you where to make an appointment. If a person does not use the Internet, then they should call Coos Health and Wellness (541-266-6700) to be put on the list for notification."

People  often try to politicize everything having to do with the Covid-19 virus, so I decided to take a look at the nationwide cases and deaths per 100,000 population in the 50 states to see if most were occurring in blue states or in red states.

The six states with the lowest death rates (Vermont, Hawaii, Alaska, Maine, Oregon and Utah) were split down the middle ... with three having Democratic governors and three having Republican governors. The same goes for the six states with the highest death rates (New Jersey, New York, Massachusetts, Rhode Island, Mississippi and South Dakota), as three are governed by Republicans and three by Democrats.

Of all the Super Bowl ads that really got my attention was the one filmed by Bruce Springsteen for Jeep which urged Americans to move past their differences and find common ground: "It's no secret the middle has been a hard place to get to lately. We need the middle. We just have to remember the very soil we stand on is common ground so we can get there." He ends with a message of hope before the words "to the ReUnited States of America."