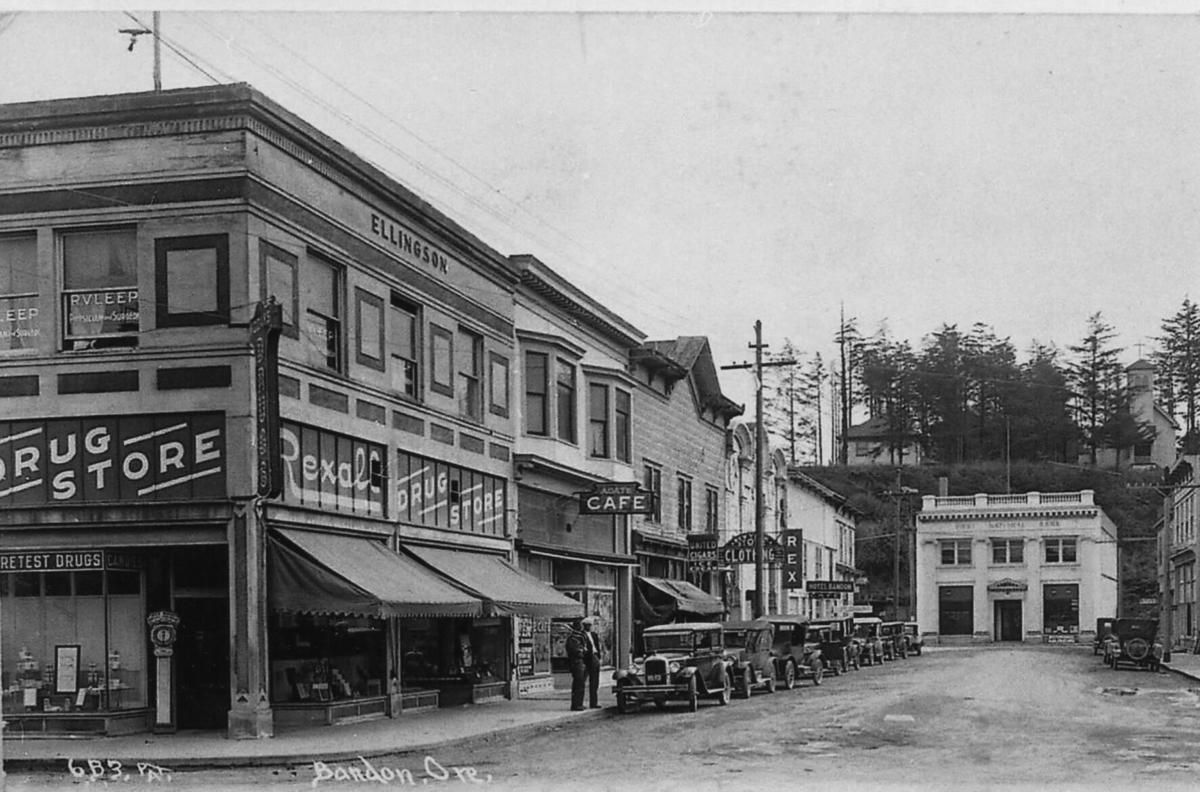 The first of the tragedies occurred in late June of 1929 when Dr. Leep, 41, was hunting sea lions at the Cape Blanco Reef with three Portland doctors, Ed Capps and Archie Rosa, both of Bandon. As they neared the large rocks where they were to land, the waters became rough and Dr. Leep suggested they put on life preservers. He apparently put his shotgun down without removing the shells. 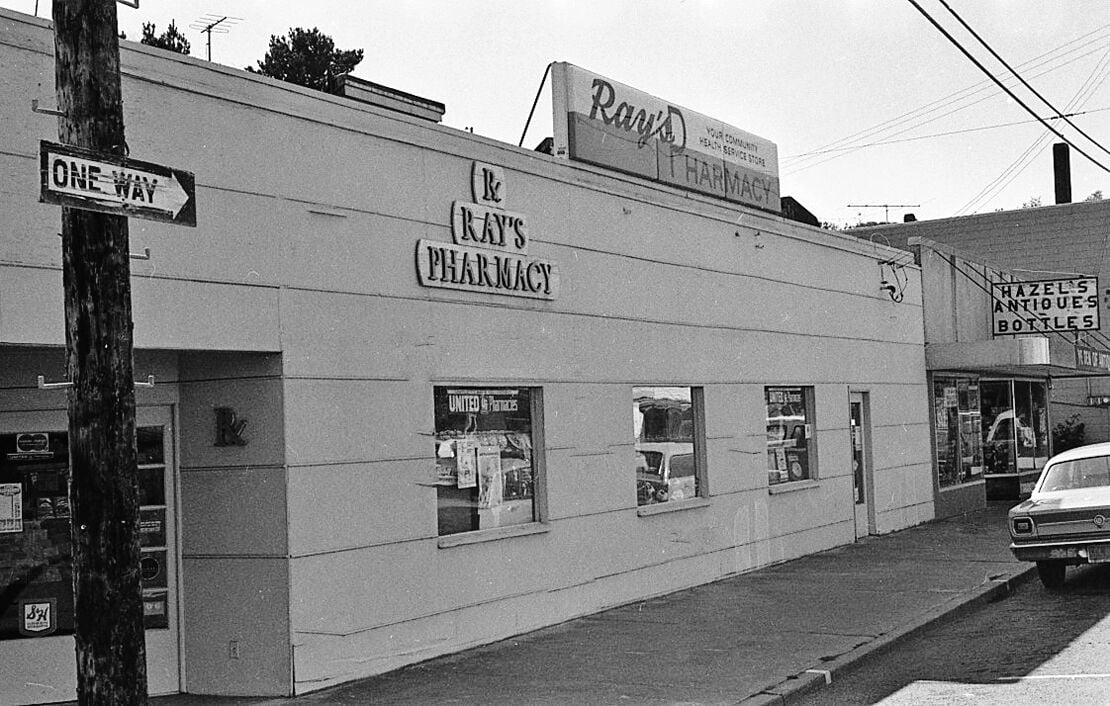 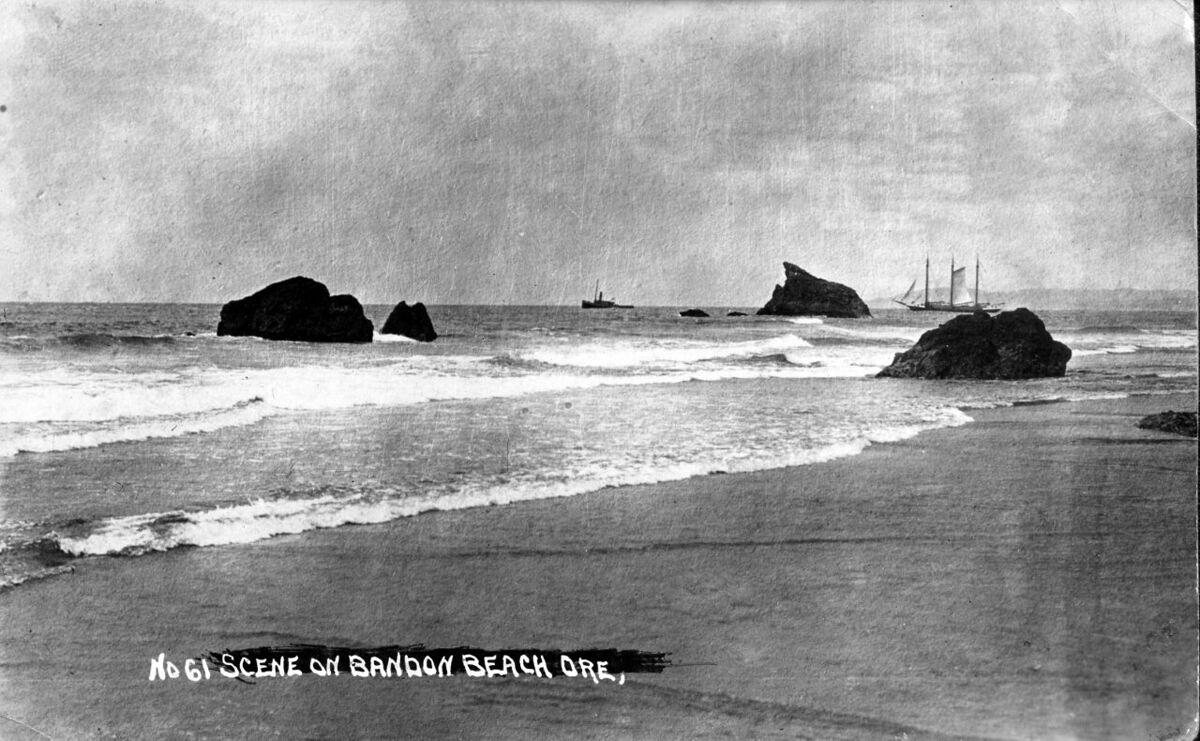 The first of the tragedies occurred in late June of 1929 when Dr. Leep, 41, was hunting sea lions at the Cape Blanco Reef with three Portland doctors, Ed Capps and Archie Rosa, both of Bandon. As they neared the large rocks where they were to land, the waters became rough and Dr. Leep suggested they put on life preservers. He apparently put his shotgun down without removing the shells.

What I really want to tell my readers about this week is what happened to several well-known doctors who served Bandon and Coos County in the 1920s, 30s and 40s. That is why I have chosen to share a picture of the Ellingson building, which was purchased by a group of doctors, dentists and druggists in 1928. They included druggist O.C. Shindler, who owned the Rexall Drug Store (in the photo), Dr. Arthur Gale, Dr. R.V. Leep, Dr. F.A. Voge and Dr. R.E. Donahey. Although not part of the purchase, Dr. R.H. Mast was instrumental in setting up a temporary hospital after the fire. Today, that is the site of the Arcade Tavern building on the corner of First and Alabama. If you look closely you can see Dr. Leep's office on the second floor above the drug store. At the end of Alabama is the National Bank building, which survived the fire and today is known as the Masonic building.

The first of the tragedies occurred in late June of 1929 when Dr. Leep, 41, was hunting sea lions at the Cape Blanco Reef with three Portland doctors, Ed Capps and Archie Rosa, both of Bandon. As they neared the large rocks where they were to land, the waters became rough and Dr. Leep suggested they put on life preservers. He apparently put his shotgun down without removing the shells. Later they decided to lash the guns together to haul them up the side of a bank. One man yelled up at the men, asking if any of the guns were loaded, but because of the strong winds, apparently the guy did not understand Dr. Leep. And in the process of moving the weapons, the gun discharged and killed Dr. Leep instantly.

Dr. Leep, who owned the Leep Hospital in Bandon, was raised in Myrtle Point, where his father was a doctor. He began practicing medicine in Bandon in 1911.

Another of the medical building owners, Dr. Gale, had practiced in Bandon the past 22 years and was among the locals who fought the fire of Sept. 26, 1936, giving aid to the ill and injured while his home and office were consumed by the flames. It is believed that the inhalation of smoke and heat weakened his lungs. He died two months later at the age of 58.

Three years later, in October of 1939, Dr. Mast, 43, owner of Mast Hospital in Myrtle Point, died when he accidentally fell from an eighth story window of the Congress Hotel in Portland. He and Mrs. Mast had been in Portland for the weekend. She was asleep when he is thought to have been in the act of opening the window when he lost his balance.

He graduated from Coquille High School and the U. of O. Medical School, and had been practicing medicine in Myrtle Point the past 17 years, although he frequently consulted with Dr. E.F. Lucas, our beloved Bandon doctor, who was his fellow scholar in medical school. After the fire, he immediately came to Bandon and set up a temporary hospital in the Bob-Otto Court, where he volunteered his services to help people.

Another of the building owners Dr. Voge, died of carbon monoxide poisoning in his Portland garage at the age of 65.

Another well-known Bandon dentist, Dr. S.C Endicott, committed suicide in 1947 on the day of his wife's funeral.

The second photo I am sharing is the medical building constructed immediately after the fire on Second Street (now the home of Winter River books) by O.C. Shindler and Dr. Lucas. It was a quite a contrast from what they had lost in the fire.

I recently purchased this interesting but very old post card (picture number three) which shows a three-masted schooner leaving the Bandon harbor, and a ship outside of the channel.

There were two very disturbing posts on Facebook Sunday, including one which occurred in Coos Bay's Mingus Park when a veteran was assaulted and the assailant reportedly walked free.

Earlier, a man had posted that his young wife was assaulted in broad daylight at 11th and Oak in Eugene as she left a doctor's appointment. A homeless man attacked her and knocked her to the ground. She saw him reach for an object in his pocket and she was able to run away. A short time later, two blocks away another woman was attacked by a homeless man, and this time the victim was stabbed and ended up in the hospital.

The incident in Mingus occurred earlier in the week when a 25-year veteran of the Navy was walking his dog. He was shoved violently into the bridge, hitting his head on a guard rail. The assailant proceeded to kick him in a rage, shouting obscenities. That is when a good Samaritan happened to be walking toward the bridge. She saw what the guy was doing and screamed for him to stop. He began to scream obscenities at the poor lady, who then left the scene in fear and called the police.

Here is the disturbing part: The Facebook post says, "Once the Coos Bay police got on scene, they took the report from witnesses and myself, where I was then told by a captain of the police that the assailant who assaulted me 'wasn't going to jail' even though I specifically stated I wanted to press charges. I was told it wasn't up to the Coos Bay officers, but the sheriff, who's policy is 'not to arrest low level assaults,' only if there's a weapon involved in an assault. This is what taxpayers get from the local Coos County Sheriff and police?" asked the poster, who was the victim of the crime.

I would say I don't believe it, but I have heard of too many crimes being committed in the Coos Bay area, where the suspect does not end up going to jail.

It's time the people of this county began to ask questions. If it's not safe to walk in broad daylight, we need to know it.

I also know that Bandon Dunes Golf Resorts sends thousands of dollars to the sheriff's office every year from taxes levied voluntarily against their lodgers. Time for a complete accounting of how that money is being used.

If priorities need to change as to how the money to fund the sheriff's office is spent, so be it. The safety of our citizens must come first.

I was sorry to learn that long-time Bandon resident Reinhard Schoepel died last week at the age of 80. Schoepel owned Reinhard's Foreign Car Service on Fillmore for a number of years, before he retired. Among his survivors are his daughter Stacia Duval and his granddaughter, Kaleigh, of The Rolling Pin.

The long closed Dave's TV building in Old Town Bandon is finally on the market. Mindy Boston of Century 21, Best Realty has the 1,800-square-foot building listed for $300,000.

It was one of the first buildings to be erected after the fire by Haga and Church, grocers; it later served as Croxall & Perry Grocery for many years before being purchased by the late Dave Elliott, whose family owns it today.

Another commercial building for sale is Mary Ellingson's Bandon Florist 3,000-square-foot building on the corner of 11th and Alabama. It is listed for $595,000. I understand that if the business does not sell, she plans to close the business.

The Minklers are a special family and it is great to hear that Josh is now a Chick Evans Scholar, a full tuition and housing scholarship awarded to exemplary young caddies of outstanding character.

His father is senior pastor at Seabird Chapel. His mother works in the Special Education department at Ocean Crest Elementary School.

For the first time in more than a decade, Bandon will be hosting a state playoff game, when Oakland comes to town Friday night (Nov. 5) for a 7 o'clock game. The winner of that game will play the winner of the Grant Union/Lakeview game the next weekend, either on Friday or Saturday. The semifinal game is the weekend of Nov. 19-20, with the final on Nov. 27.

It appears that Coquille will host Monroe Friday night, but when I wrote this Sunday night, the time had not been posted.

Bandon's football squad, coached by Jordan Sammons, has had an impressive season, with a 7-3 record, including a heartbreaking two-point loss to Coquille  40-38, and an impressive 14-7 win over Reedsport.

In an earlier non-conference game with Oakland, last Friday night, the Tigers fell 18-7, but plan to be ready for a rematch this week.

I have learned that in accordance with the governor's mandates that require health care workers to be vaccinated, 154 employees of the Southern Coos Hospital and Health District are fully vaccinated, while there were 18 religious exemptions granted as well as eight medical exemptions.

People are reminded that a tree-planting event will take place from 10 a.m. until noon at City Park Saturday, Nov. 13, hosted by Friends of Bandon Parks.

Christine Hall, chair of the city's parks and recreation commission, said Bandon has lost over 100 trees in City Park, mostly because of storms and the age of the trees.

Sponsors of the event are city of Bandon, Stillwater Natives Nursery, Friends of Bandon Parks and Samantha Stanger, who is the tree donor.