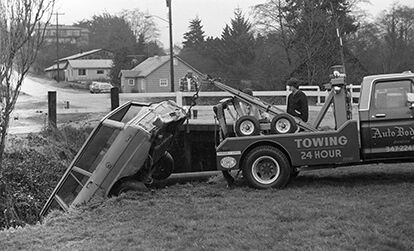 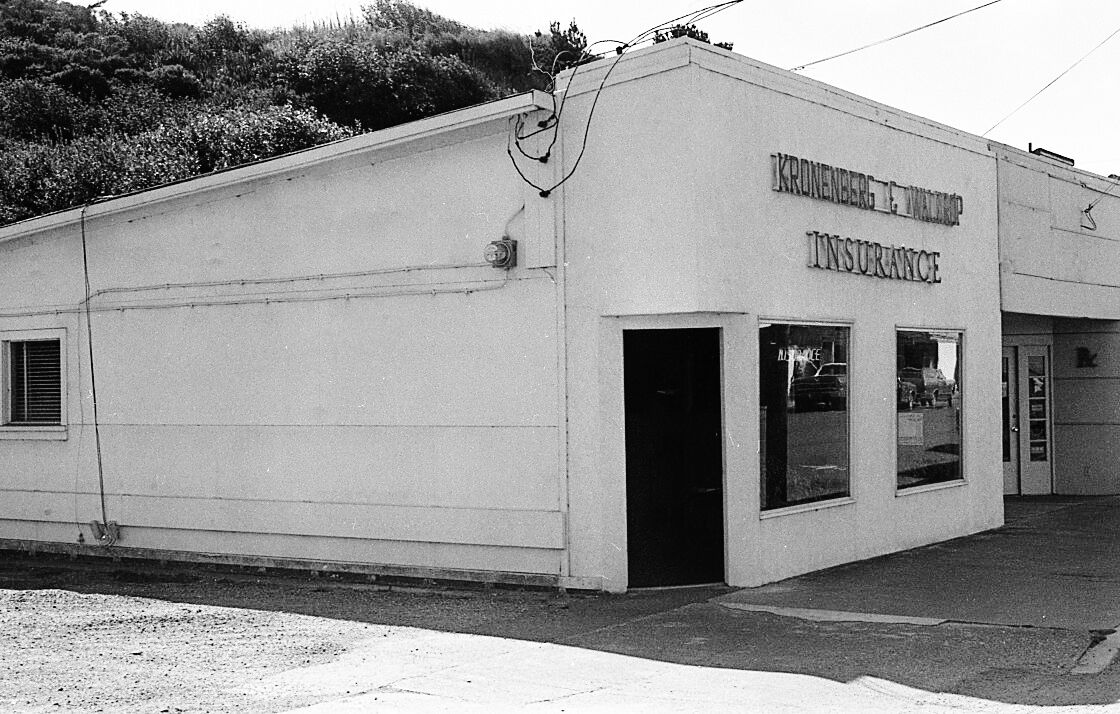 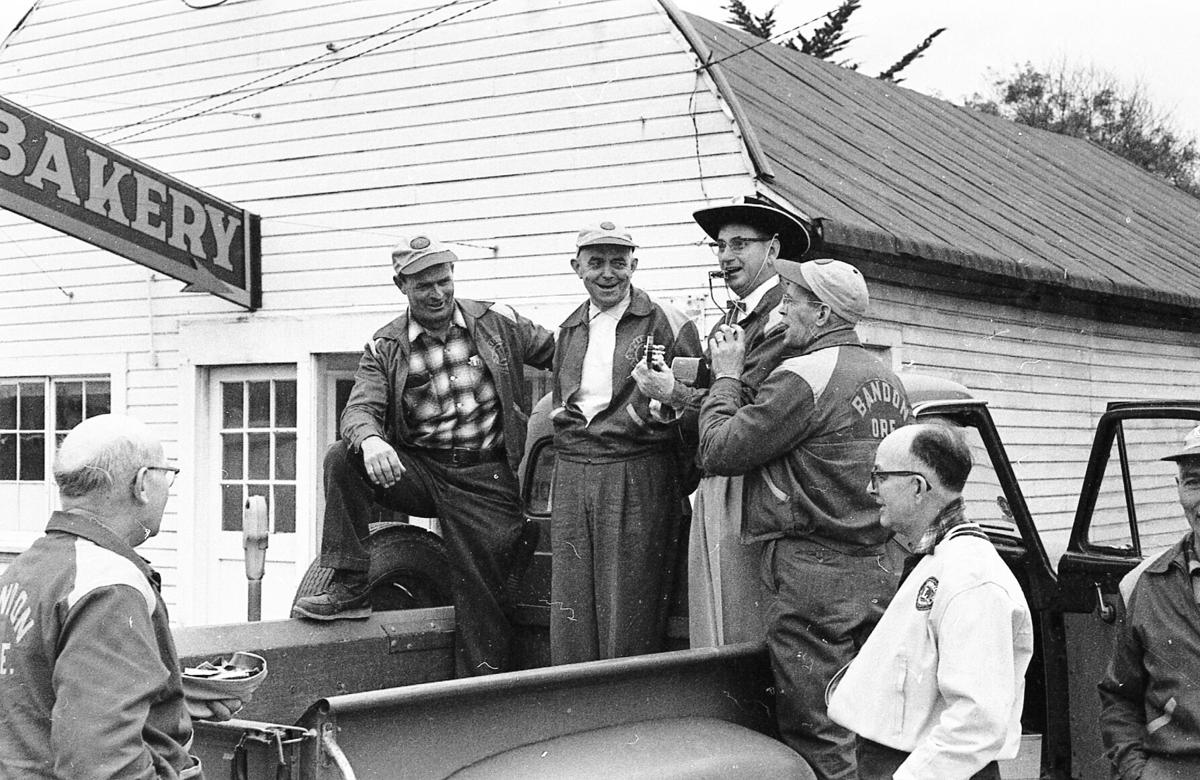 I am sharing the first picture, taken in February of 1979, because I remember clearly that the police did not know if anyone was in the car until the wrecker pulled it out of Ferry Creek, alongside the old Coquille Valley Dairy Co-op (now the location of Face Rock Creamery).

Here's what I wrote in the paper: "A Bandon man, William Gauggel, who lived on Second Street, escaped with only minor injures after he drove his 1963 Chevrolet station wagon into Ferry Creek about 7 p.m. Sunday. Earlier in the evening, his car had been stuck on the city's gravel pile a short distance away, but he had advised Police Officer Harry Franson about 6 p.m. that someone was coming to help him." (You can see Harry standing on the bridge, in the plaid shirt, watching the wrecker tow the vehicle).

"Gauggel told officers Monday that as he drove across the cheese factory parking lot south of Third Street and attempted to turn right onto Third, the car's steering mechanism failed and he drove directly over the embankment, with the car landing upright in the creek some six feet below. Instead of notifying the police, he walked home, according to Chief D. S. MacDonald. It was towed out of the creek by Mock's Auto Body Hospital wrecker."

Note, that half way up Third Street, on the right, you can see the roof of the foundry that the Philpotts owned for many years. It was torn down within the last 15 or 20 years.

The second photo was taken in 1970 of the former Kronenberg & Waldrop Insurance building (previously George's Electric) which was owned by George Kronenberg and Eddie Waldrop. Today the beautiful building is the home of Sassy Seagull, but I've learned that the long-time building owners, Beth and Ed Wood, have sold it. The new owners are Kim DeVane and Lawrence Abbott Jr., who also own a home on Beach Loop. The sale price was said to be $300,000.

I love this third picture, taken in the mid-'60s of members of the Bandon Lions Club gathered in front of Marvin and Esther Leach's bakery in downtown Bandon during a fundraiser for the March of Dimes.

The Lions were a fun-loving, but hardworking, group of guys, and generally at the center of things was school superintendent Roland L. Parks, with guitar in this picture. From lower left are Ernie Wehner, Howard Tucker, George Kronenberg, Parks, O.S. Valentine and Bill Ellis. I can only see one eye of the guy at right who is basically out of the picture, but I think it is Ralph Yockey.

The bakery was located about where Coastal Mist is now.

The rainfall report for the month of September indicated we had 2.62 inches of rain, compared to 4.57 last year and 0.45 the previous year.

Totals for the rainfall year (which is October through September) shows this to be a very dry year with only 35.76 inches of rain compared to last year's 60.81 and 2018 with 61.45 inches.

You've probably heard by now that Southern Coos Health District will be once again giving free flu shots Thursday, Oct. 29, near the baseball diamond in City Park from 7 a.m. to 1 p.m. It's first come, first served and the district CEO Eugene Suksi said they have 150 units of the vaccine for people over 65 and an equal number for those under 65.

I know a lot of you have already voted, but I need to share an email I received recently from a woman who has been involved in the health care industry in Coos and Curry counties for some years .... regarding Ballot Measure 110, which would make a citation for small amounts of meth, heroin and cocaine no different than a traffic ticket.

She said information from the PAC supporting it has "measure 110 incorrectly and misleadingly saying it expands Drug Addiction Treatment. What is means is that people using meth or heroin would not be arrested but sent for a referral for drug treatment. But what it doesn't tell you is that we already have that system in place for everyone with Medicaid (Oregon Health Plan) or the homeless, who are considered presumptive Medicaid. They all have free drug treatment options. They just won't go unless it's court ordered. Measure 110 does not court order drug treatment because it does not have the funds for actually having more drug treatment centers but funds will be taken from our referral and drug treatment agencies here in Coos and Curry counties. If this measure passes there will be no oversight for all the children whose parents neglect and abuse them while using meth and heroin." Most DAs have come out against this measure as has the Oregon Association of Chiefs of Police.

One argument in the voter pamphlet said it best: "Measure 110 sends a terrible message to kids and removes the one tool parents can count on in the fight against juvenile drug addiction."

I want to end on a bit of a humorous note, having recently seen a Facebook post from someone who wanted to see a younger person be mayor. My opponent in the mayoral race is 74; I am 81 (and just finished the most difficult Sudoku of the week in the Register-Guard). In the 1984 Presidential campaign, President Reagan was famous for his quote: "I will not make age an issue of this campaign. I am not going to exploit, for political purposes, my opponent's youth and inexperience." Reagan was 73; Walter Mondale was 56.

I couldn't help but laugh when I saw this .... listed as one of the top 10 debate quotes of all time. Oh what we wouldn't give to see some of that humor today.