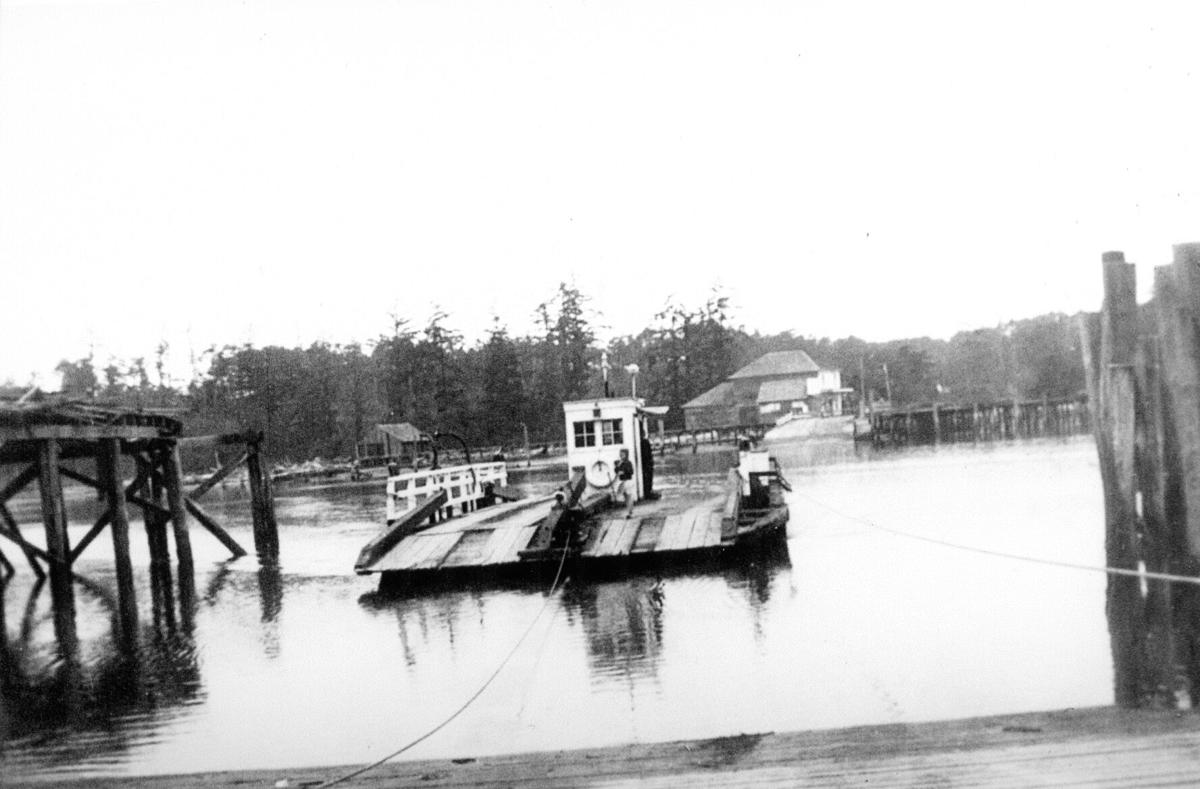 The ferry operates in the 1930s, long before the bridge was built. Bottom, the Bandon Rural Fire Department received a $1,200 grant. 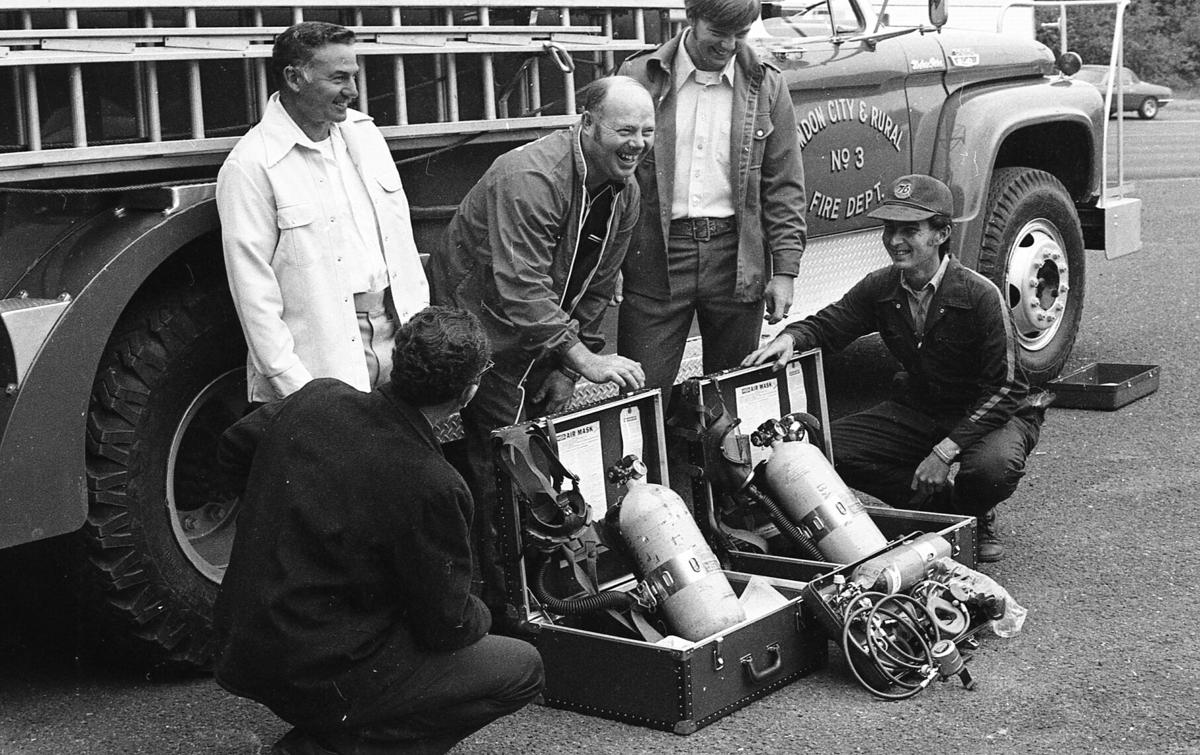 The ferry operates in the 1930s, long before the bridge was built. Bottom, the Bandon Rural Fire Department received a $1,200 grant.

"The Bullards ferry pictured in the foreground of the accompanying Western World photo (first photo) is no more, and its replacement last Thursday by the beautiful new bridge in the background stirred many memories of residents who lived in this area when the first small ferry scow was propelled by hand-operated windlass across the Coquille River in September 1891 by the builder, Robert W. Bullard, pioneer, rancher, storekeeper and postmaster."

I had to look up the word "windlass," and determined it was a type of winch used especially on ships (or in this case the ferry) to hoist anchors and haul on mooring lines.

"When the first ferry crossing was effected, James Morrison was on hand to help Bullard set the passengers across, and on the final day the ferry was in operation last week, Morrison was one of the last passengers to be set across the river by Chief Operator F.S.Younce."

Several weeks ago in my column, I had a picture of Mr. Morrison with the old American flag. He would have been 87 years old when he last rode the ferry with Bill Smith's grandfather, Mr. Younce.

"Bullard operated the ferry as a private enterprise until the county took it over in 1909. For many years, Bullard supplied the scow and a gas-powered boat for towing it, after the hand operation was eliminated, for the sum of $50 monthly.

"Operating expenses of the ferry at the time of its abandonment amounted to approximately $18,000 annually, and required two full time operators and a relief man. An average of 4,000 vehicles, including 1,000 trucks, crossed the ferry each month and between 13,000 and 14,000 passengers," according to the article.

The bridge which replaced it was financed jointly by federal, state and county funds.

The County's share was financed by a $300,000 bond issue, which was expected to be paid off in 20 years from savings realized by discontinuance of the ferry.

"Construction began in January 1953, and while still not fully completed, it was officially opened to traffic Thursday of last week.

"Further work completed this week included the placing of straw on the sides of the fills that make the approaches, for the purpose of helping prevent erosion, and the seeding of the ground."

While those living "on the other side of the river" finally had easy access, it is important to remember that Highway 101 to Coos Bay did not open until 1960.

I remember making several trips across the ferry with my grandmother, Grace Felsheim, at the wheel ... and me mostly worrying if we would make it. We always did ... even the one time that we were stuck in the middle of the river after a problem caused the ferry to temporarily stop working in midstream.

I hear a lot of concerns about the bridge today, which many say is not safe for pedestrians and bicyclists, but considering the alternative .... I'll take the bridge any day.

The second photo, taken in the 1930s, shows the ferry long before the bridge was built. Across the river you can see the Bullards Store, which was later moved to another location because the property on which it stood had to be torn down to make room for an approach to the new bridge.

For years, the building housed the Bullards post office, which was established in June 1897 when Robert W. Bullard, pioneer resident and founder of the Bullards ferry, was authorized to open a post office and to call it by his own name, with the addition of the letter "s".

Bullard and his son-in-law Lester Bundy, were the only two men to serve as postmasters. The Bullards Post Office closed on Jan. 31, 1955.

In the early days, before the ferry, mail was brought to Bullards by boat, two of the most active being the Charm and the Dispatch.

The third picture was taken in July of 1975 when the Bandon Rural Fire Department had just received equipment valued at $1,200, which included two air masks and a portable resuscitator, through an agricultural marketing promotion program sponsored by Dow Chemical USA.

I was so sorry to learn this week that long-time Bandon resident Mike Lane had died after battling cancer. Mike's wife, Martha, taught in the Bandon schools for some years, and they have a son Mark and a daughter Mary, who is married to Craig Minkler. Mary and Craig have a young son, Emmett.

I got to know Mike when he attended several of our city council meetings as we verbally battled the issue of whether or not we would support a Marine Reserve offshore from the Coquille River. I felt it was pretty much a political issue, and when it ended in a 3-3 tie, I knew I was right.

Mike, as a commercial fisherman who represented the fishing industry on a number of important commissions, would have to carry out the wishes of the council, who were completely divided on the issue. But when it came down to a tie, the decision was completely up to me. And for the first and only time in my 17-year career, I refused to vote. One of my "liberal" friends on the council was furious and he commanded me to vote. But I refused.

So, the issue was moot, and it left Mike with the freedom to vote his conscious as to what he felt would be best for those he represented, as well as for the environment. And I had no doubt that he would do the right thing.

A few days later, I saw him in the store, and he thanked me for having the courage to not take a position on an issue, which we clearly were not ready to make nor did we understand the ramifications.

Truly one of the "good guys," Mike is just one more in a long line of our friends and neighbors that we have lost in the last couple of months, and he will be missed.

I received a call the other night from one of my doctor friends, who is passionate and extremely worried about the huge surge in COVID cases that Bandon and Coos County have experienced of late. He is worried that people do not seem to be taking it seriously, in spite of the fact that I know of four people from Bandon, or related to someone in Bandon, who have died of COVID in the last two weeks.

I have learned that there were 17 cases of breakthrough COVID at Pacific View this weekend, and I already knew there were a number of cases in the memory care unit.

I understand one of our local doctors, Doug Crane, has been caring for 30 people who tested positive, but who did not have a primary care doctor.

By far the largest percentage of people who end up in the hospital, and on a ventilator, are those who have not been vaccinated.

Nurses are interviewed nightly, urging people to get vaccinated. One from Peace Health said, "It is heartbreaking ... and preventable. Of the 14 patients in the ICU, only one was vaccinated. And we're angry." The latest surge, which in places like Bandon is far worse than at any time in the pandemic, is taxing health care professionals and the hospitals they serve.

One doctor said today that people are so desperate for a treatment that they are trying experimental drugs that have been used on animals ... while at the same time they are unwilling to take a vaccine that will pretty much keep them out of the hospital, and has gone into the arms of 170 million people in the U.S.

Heartbreaking and mind boggling is the best way to describe what is happening. Even former president Donald Trump was on TV today urging people to get vaccinated.

Governor Kate Brown has issued a mandate that requires all teachers and health care workers to be vaccinated by a date certain. Many are hesitant because they say the vaccine has not received FDA approval, but that came this week, at least as far as the Pfizer vaccine is concerned.

Please, I urge everyone to get vaccinated, and to wear a mask anytime you are indoors around other people. If not for yourself, do it for your friends, your family and our community!

I received word last week that David Johnson (Bandon High School Class of 1976) and a resident of Bandon for the past several years, had died of COVID.

According to my source, he was very ill, and from Bandon, he was sent to Bay Area Hospital. Then they wanted him to go to Roseburg, but the ICU in Roseburg was full. And he died.

I remember David well as he was in the same class with my youngest sister, Mindy.

I recently received the latest rainfall (if you can call it that) data from Gerry Terp, who recorded nine-tenths of an inch of rain for July, compared to fourth-tenths of an inch last year and a third of an inch in 2019. July is historically one of the driest months of the year, and this year was no exception.