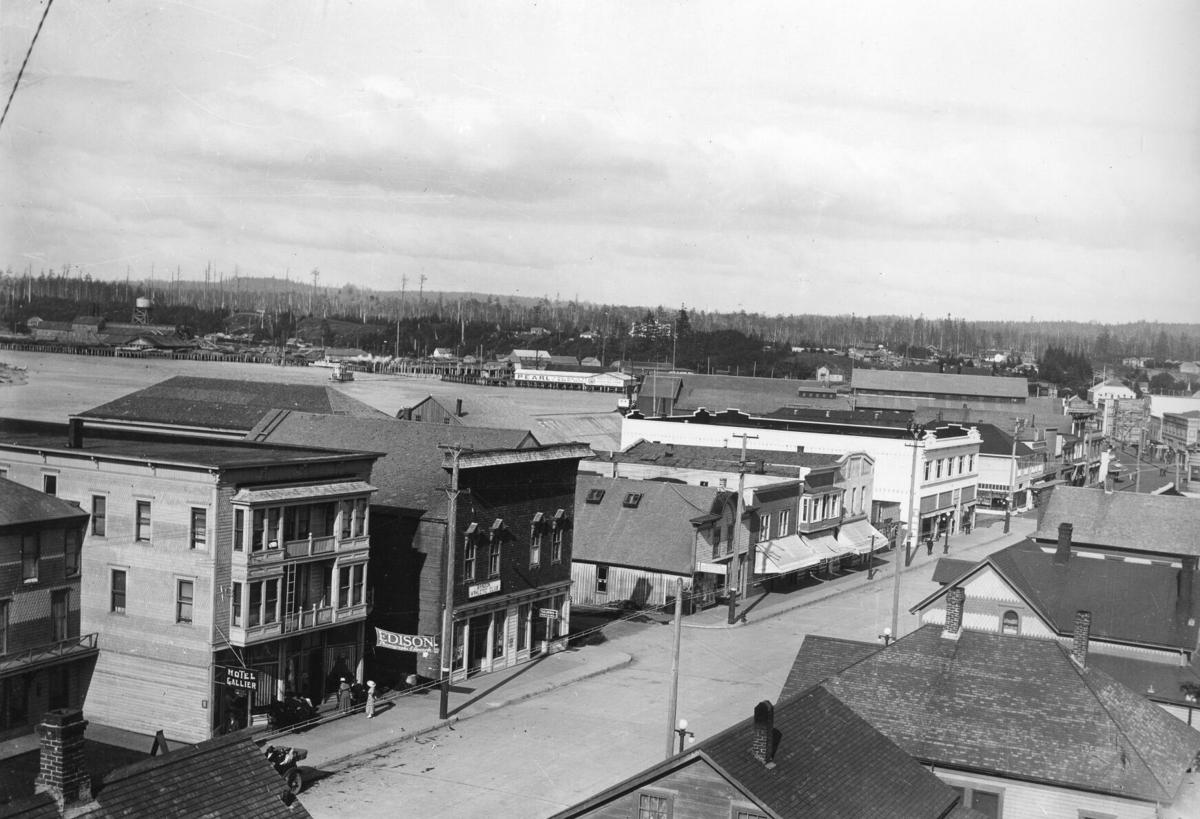 The west end of First Street, including the Gallier Hotel, before much of the town was destroyed in the first of 1936. 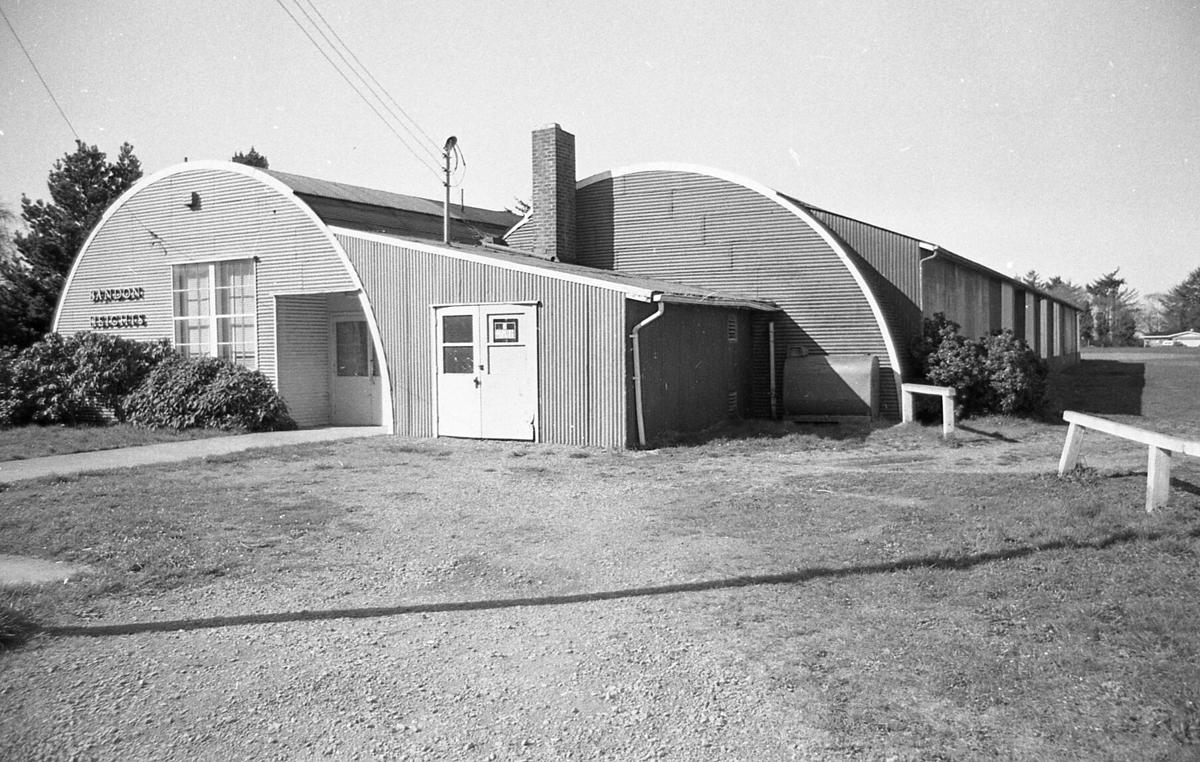 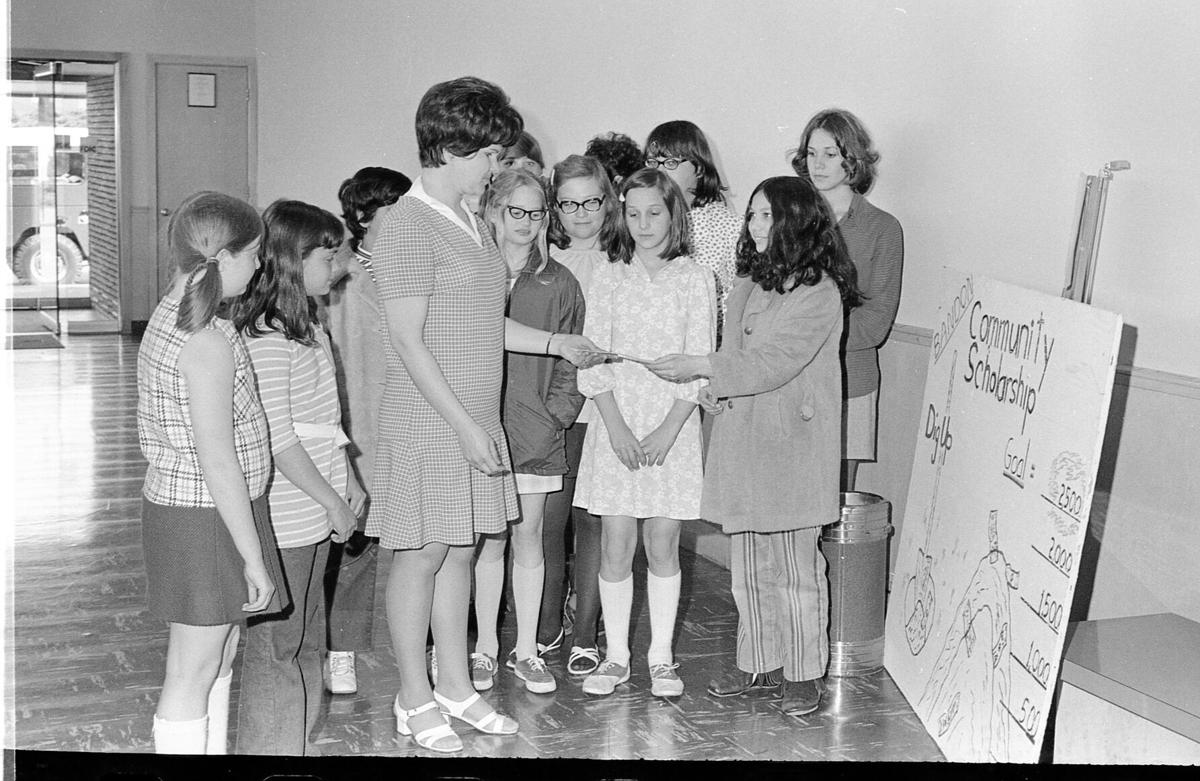 The Measure-Up 4-H Club presents a check to Western Bank employee Joyce Van Leuven for the Community Scholarship Fund in 1971.

The west end of First Street, including the Gallier Hotel, before much of the town was destroyed in the first of 1936.

The Measure-Up 4-H Club presents a check to Western Bank employee Joyce Van Leuven for the Community Scholarship Fund in 1971.

The first picture I am sharing gives a great look at what the west end of First Street looked like before the Fire.

I'm not sure when this picture was taken, but I have chosen it because it is a good picture of the Gallier Hotel, which is the three-story building at bottom left. If you look carefully you can see the Hotel Gallier sign on the west side of the building.

I found a cool story in the May 11, 1916, Western World about the hotel. "Bandon narrowly escaped the ravages of another big fire when through the prompt action of E.M. Gallier with the aid of a patent fire extinguisher, a threatening blaze was put out in Room 2 on the second floor of the Hotel Gallier."

(The other 'big fire" that the writer, who was probably my grandfather, was talking about was the fire of June 19, 1914, which destroyed a large part of the business district east of this area. Little did they know what lay ahead for the town 20 years later).

"One of the lady vaudeville performers appearing at the Orpheum this evening had left a coal oil stove burning in her room while she went down town. The flame of the stove apparently crawled up until it reached through the top, and the casing of the sheet iron affair became a red hot furnace. A celluloid comb on the dresser caught fire and ignited the dresser itself. The floor took fire and an umbrella hanging across the room from the stove burned up. The plastered walls saved the day however.

"The blaze was discovered by Mr. Lemanski, who, while passing down the hallway, noticed the smoke emanating from the transom. He spread the alarm and Mr. Gallier promptly appeared on the scene. He had a hard battle and in the act received an ugly burn on the left side of his jaw and neck. His wound is not serious but has caused him considerable pain.

"With an unusually strong north wind blowing, the fire, if exposed to a draft, would soon have gained such headway that it would have been impossible to overcome it. The hotel building is situated so that a large part of the town would have burned down."

The hotel was located near where the old Coast Guard building sits today.

The second picture is of the QuonsetGrade School, which opened in east Bandon in September of 1949. This picture was probably taken sometime in the '50s, but it looked pretty much the same for many years.

An article in WW says that "First, second and third graders inaugurated the newly completed North Bandon grade school Monday, when classes were begun in the quonset type structure for the first time."

"The building extends east and west, with entrances at both ends of a full-length hallway. Entering through the main entrance on the east (pictured above) one sees the furnace room on the right, housing an automatic oil-burning hot air heating system, outside the main structure. All rooms are on the south side of the building."

This building was later removed and replaced with the quonset hut-type building that sits there today, and I believe houses baseball equipment for the high school and may provide a practice center during bad weather.

The third picture was taken in May of 1971 as Western Bank employee Joye Van Leuven (now Olson) accepts a check from members of the Measure-Up 4-H Club for the Community Scholarship Fund.

I can see Allison Jones next to Joye, Teena Manes next to her, in back Mary Franson and beside her is one of the Gardner sisters. It may be Dixie Wilson handing Joye the check.

I found another article that could easily have been written today .... but in the Feb. 26, 1920, Western World, headlined "City Goes Under 'Flu' Ban at Noon Today."

It seems that at a combined meeting of the city council and the school board, the decision was made that because of the increase in the number of influenza and small pox cases, schools were closed at noon that day.

At that same time an order went into effect prohibiting house parties, basketball games, dances, lodging meetings, shows, churches and all other gatherings of similar nature. The order was effective for a week and was to continue longer if necessary. Several deaths had occurred in the county that week.

While we are on the subject of pandemics, I thought it was interesting to read a Facebook post Sunday from something called "Coos County News Network," indicating that I had joined a coalition of cities urging businesses to reopen on January 1.

The coalition was started by Mayor Stan Pulliam of Sandy, and even though I sympathize with the sentiment that led them to take this stand, I chose to help the Coos Bay city manager write a letter to the Governor, which was signed by a number of elected officials in the county, including Coos Bay Mayor Joe Benetti, County Commissioner Melissa Cribbins, North Bend Mayor Jessica Engelke and me.

My fear is that if the restaurants and bars in those cities who supported Mayor Pulliam's position go ahead and open, they stand to have OLCC suspend their liquor license or to be fined by OSHA. That is the big problem with defying rather than trying to work with the governor.

The letter that I signed onto said, in part: "We and many of the constituents we represent are concerned regarding the current pandemic restrictions on businesses in Oregon as they have resulted in devastating impacts to our lodging, restaurants, fitness, and entertainment sectors. These restrictions are adversely impacting lower-income workers the hardest."

It goes on to point out that available data and research indicates that business-related restrictions have little impact on the spread of Covid-19... quoting research in New York that showed that restaurants and bars accounted for only 1.4 percent of the virus spread.

It adds: "While restaurants, bars, fitness centers and indoor entertainment has been shuttered for months in and around Portland, the virus is still spreading. That spread has been attributed to small social gatherings where arguably virus protection best practices are not being followed."

The letter ends ....."we are urging you to reduce the metrics and restrictions on Oregon businesses. The longer the current restrictions/metrics are in place, the greater the adverse impacts will have both short term and long term on our small businesses, the Oregonians they employ, and our overall economy which is not in the public's interest!"

I heard this week from my childhood friend Margaret Huntington Ward, who lives in Lake Oswego and has been married to former Chicago White Sox baseball standout Pete Ward for many years. Her father, Ben C. Huntington, was superintendent of schools here back in the late '40s before they moved to Vida where he was head of the McKenzieRiverSchool District.

Margaret told me that her husband suffers from the advanced stages of dementia, and that their son, Steve, was hospitalized with the coronavirus in mid-December, and died last week of cardiac arrest as the doctors had run out of options.

It was good to hear from her, even with such sad news.

I was pleasantly surprised to see the Quote of the Day in last Monday's New York Times was by an old friend of mine, Adam Zimmerman, who heads the nonprofit organization, Craft3, which gives loans to small businesses in Oregon and Washington and received $10 million as part of Mackenzie Scott's $4.2 billion giveaway.

Mackenzie is the former wife of Amazon founder Jeff Bezos.

Adam was quoted as saying: "Usually you don't have very large philanthropists wandering the landscape looking to drop millions of dollars very quietly into organizations that they care about. The first email literally got stuck in my junk mail," said Zimmerman, who started out as a RARE student with the City of Myrtle Point over 20 years ago, which is how I got to know him.

Craft3 was also one of the original funders of the Face Rock Creamery.

The non-profit is well known for assisting companies throughout the Northwest, and it was fun to see that Adam was still there after all these years.