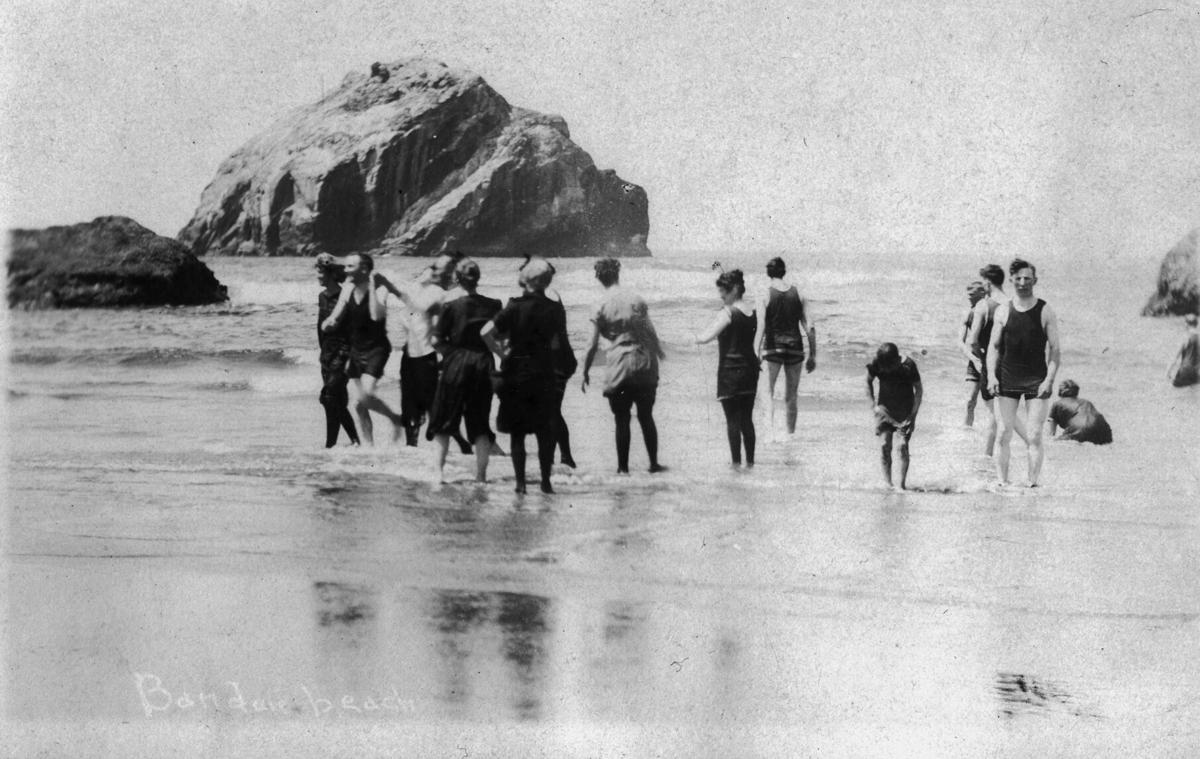 A group of people frolicking on the beach in front of Face Rock (better known as Sphinx Rock in those days). The picture is not dated, but judging from the attire, I would say it was probably in the 1920s or maybe earlier. 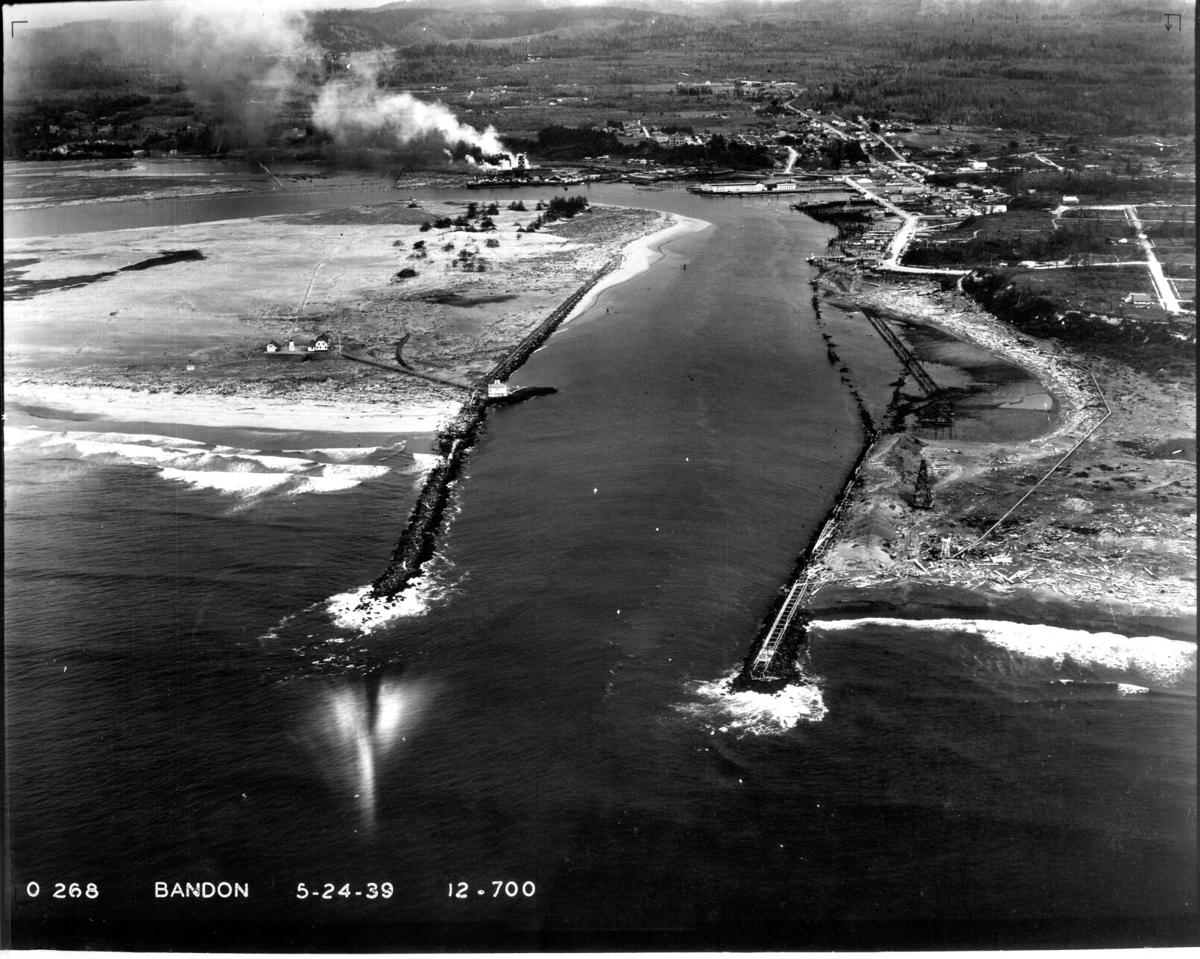 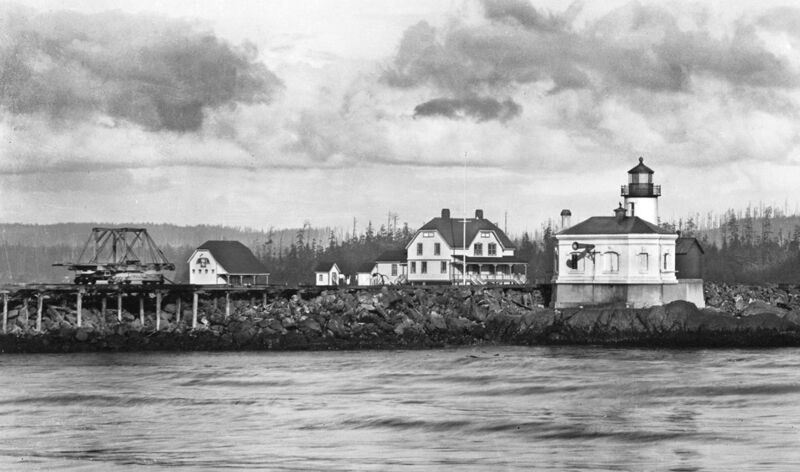 A group of people frolicking on the beach in front of Face Rock (better known as Sphinx Rock in those days). The picture is not dated, but judging from the attire, I would say it was probably in the 1920s or maybe earlier.

While reading my grandfather's editorial in the July 20, 1916, Western World titled "We Need A Bath House," I thought of one of the pictures in my collection, featuring a group of people frolicking on the beach in front of Face Rock (better known as Sphinx Rock in those days). The picture is not dated, but judging from the attire, I would say it was probably in the 1920s or maybe earlier.

It seems that Victor Murdock, a national political figure, was in Bandon the previous week for the six-day Chautauqua, and while here he took off his shoes, rolled up his pant-legs and with other prominent Chautauqua folks went wading in the surf.

"This is simply great," he said. "If they only had a place here where one could get a bathing suit and change clothing, how we would love to fight those wonderful breakers."

And in the evening from the lecture platform, he told the people that with the exception of the Jersey coast in France, Bandon had the most beautiful beach he had sever seen. The Jersey coast is similar to this one in scenery, he said, but it is not superior.

"We, who live here, little appreciate what a wonderful resource the local beach really is. The time is rapidly approaching when people from all parts of the interior will come here to spend their summer vacations. We should begin to prepare for them, and the first prerequisite is a bath house - a place where pleasure seekers can rent suits and change their clothing. Such a place would encourage local people to take advantage of the surf and Bandon would soon gain popularity and become one of the favored summer playgrounds of the Pacific."

The six-day Chautauqua featured speakers from many parts of the country, and was underwritten by a number of Bandon businessmen. The following year, they hoped to make it self-supporting by selling at least 500 tickets.

The editor added: "Chautauqua week made us forget our troubles for a little while, and it was worth the price if for that alone."

A Chautauqua is described as "an institution that provided popular adult education courses and entertainment in the late 19th and early 20th centuries."

I am using the second picture, taken in May of 1939 by the Corps of Engineers, to illustrate an article in the Feb. 9, 1939, Western World about a new plan for the lighthouse, which can be seen in the lower third of the picture. Note the wooden walkway north of the lighthouse which leads to the lighthouse keeper's residence.

If you are viewing this on a computer screen, you can blow it up and find lots of landmarks, including the old high school on the hill in East Bandon, just above the north end of the old truck shop. If you are viewing the print version, it will be harder to see, although you can find Moore Mill in the background with smoke billowing up from the wigwam burner.

Earlier believing that the lighthouse on the north bank of the Coquille River was to be discontinued, the city council adopted a resolution opposing such a move.

Instead Mayor K.I. Franklin received a letter from the superintendent of lighthouses assuring them the contemplated change would actually be an improvement.

"So far as this office is aware, there is no intent to abandon the lighthouse at Coquille River. There is an approved project covering the installation of a light of increased candlepower and an improved fog signal at the end of the south breakwater designed to improve the aids to navigation at the entrance of the Coquille River. When this new aid goes into operation, the present lighthouse will be changed to an electric light and the fog signal at that location will be discontinued. The services of the two lighthouse keepers will be retained in their present quarters on the north side of the river. A larger and more adequate boat will be provided and the keepers will be placed in charge of the ranges and minor lights in Coquille River," said the official.

Eight months later, a front page article is headlined: "Lighthouse buildings are abandoned." These are the buildings you see behind the lighthouse in the third photo, although from a different perspective than in the second photo.

The lighthouse property had been transferred from the U.S. Lighthouse Department to the Coast Guard Department. It meant the elimination "of one of the oldest landmarks on the local landscape - the lighthouse keeper's residence on the north sandspit."

An appraiser was to be coming to Bandon to determine the value of the residence and outbuildings that were to be disposed of. "The old lighthouse tower will likely be left as a landmark, at least for the time, but the equipment will be taken out and neither light nor horn will be operated, said the spokesman."

It was to be replaced by the new light on the south jetty.

Although I don't have a photo to go along with this story, I found some interesting history about Port Orford in the June 8, 1939, Western World in an obituary for Kate Unican Leneve.

She was the last of the Unican family, who had lived in or near Port Orford since 1851. Her parents, Mr. and Mrs. Fred Unican, originally from Ireland, arrived in Port Orford in the first party to be brought by Capt. Tichenor in the summer of that year, with a company of soldiers, following the Indian attack on the nine men at Battle Rock which had temporarily prevented settlement.

"The Unicans settled on a homestead three miles north of Port Orford, on the high ground south of Elk River. There Kate Unican was born March 16, 1864.

"One of her early memories was a harrowing incident of her childhood occurring when the great forest fire of 1868 swept a roaring avalanche of flame over the Coast range and to the ocean, devastating a wide region in southwestern Oregon.

"Only the resourcefulness of hardy, pioneer parents saved the family from death in the flames, surrounded as they were on all sides by burning forests. The children, Kate and her small brother John, were lowered into the well, securely tied to the big bucket which was operated with a windlass. The parents sought a swampy place and dug into the mud and thus saved their lives. When the fire had passed on the second day, they hurried to the well and were rejoiced to find their children also alive and safe. All that day, with their children, sustained only by a few blackened apples found in the little orchard, the Unicans reached Port Orford to find there only three buildings unburned."

She was later married to Dwyer Leneve, who opened the first drug store in Port Orford.

I saw an article in the World recently that said the Biden administration has announced plans for seven offshore wind farms, one of which is expected to be off the Oregon Coast.

The article explained that on June 23 in a presentation to the Curry County Board of Commissioners, the Bureau of Ocean Energy Management outlined their process in identifying locations for the truly massive wind turbines, the largest of which would be taller than the Statue of Liberty and the Washington Monument at more than 850 feet.

The article said, "A trove of documents ... show that the site possibilities extend the full length of the Oregon coastline -- although the South Coast is more likely, because winds blow stronger there."

I saw a very troubling article in The Oregonian (and later Sunday in the Register-Guard) about a crowd of around 100 people in downtown Portland last week, who went on a rampage, smashing storefront windows, lighting dumpsters on fire and generally causing over half a million dollars in damage .... and the Portland police did nothing to stop them.

Portland Police Bureau officials say the reason they allowed it to happen is because of legislation passed earlier this year by the Oregon legislature, which restricted the use of things like pepper spray and rubber bullets for crowd control.

The article explained that the exception would be if the circumstances constitute a riot and if the officer using the chemical reasonably believes its use is necessary to stop and prevent more destructive behavior.

Talk about a city without law! I guess 100 people doing over $500,000 worth of damage doesn't rise to the point where police will intervene. Makes you wonder what that threshold would be?

I can only imagine how the business community feels ....

Did you know that Bandon has lost over 100 trees in City Park in just seven years? That's the question asked by Christine Hall, chair of the city's parks and recreation commission and a member of Friends of Bandon Parks.

People are urged to come to City Park on Saturday, Nov. 13, at 10 a.m. to spend a couple of hours planting trees to replace those lost to storms and aging. They will gather at the City Park gazebo.

I was sorry to learn that Earl Stephens, a member of the BHS Class of 1962, died last week at the age of 78. Earl and his wife, Kathy, had recently moved back to Bandon to be nearer family. Among Earl's survivors are his brother Harry Stephens and his sister Debbie Storm.

For those of you who have been wondering when the Bandon Public Library will once again be open to the public to browse the shelves, the answer is now. They announced that the library will be open on Wednesdays from noon to 6 p.m. and on Saturdays from 10 a.m. to 4 p.m.