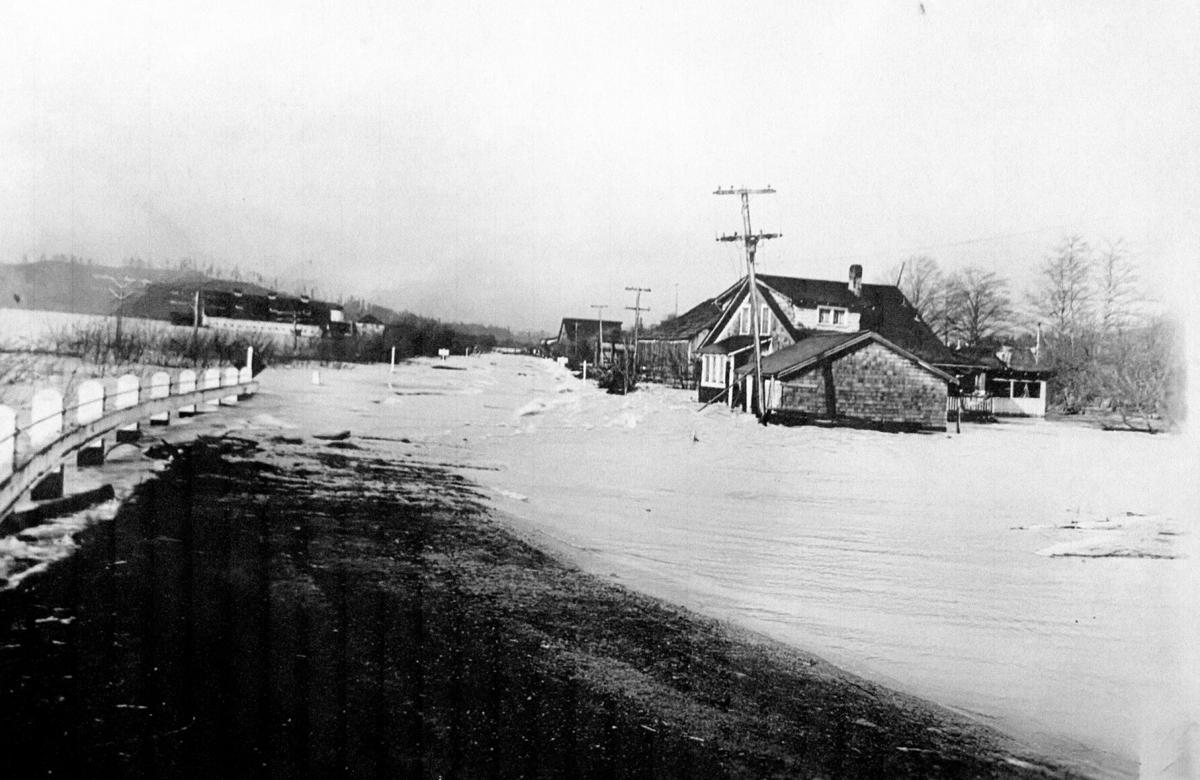 Homes at the east end of the dike heading into Coquille, that seemed to always flood. 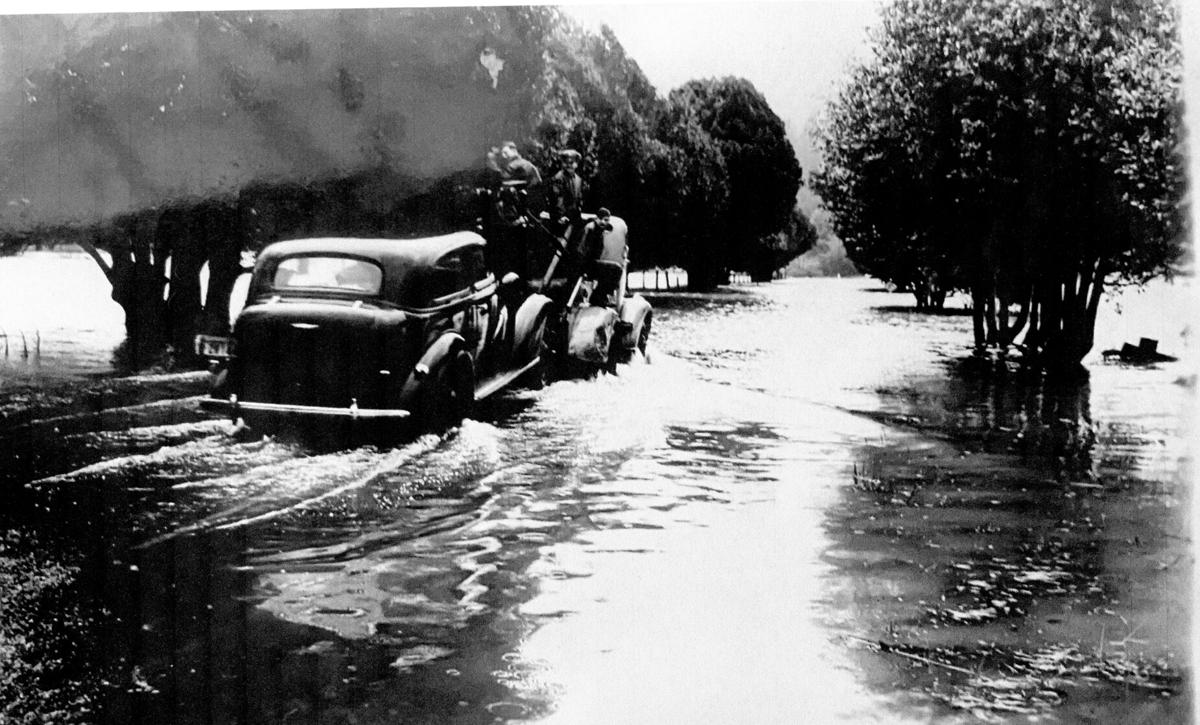 Rescuers pull a car out of deep water. 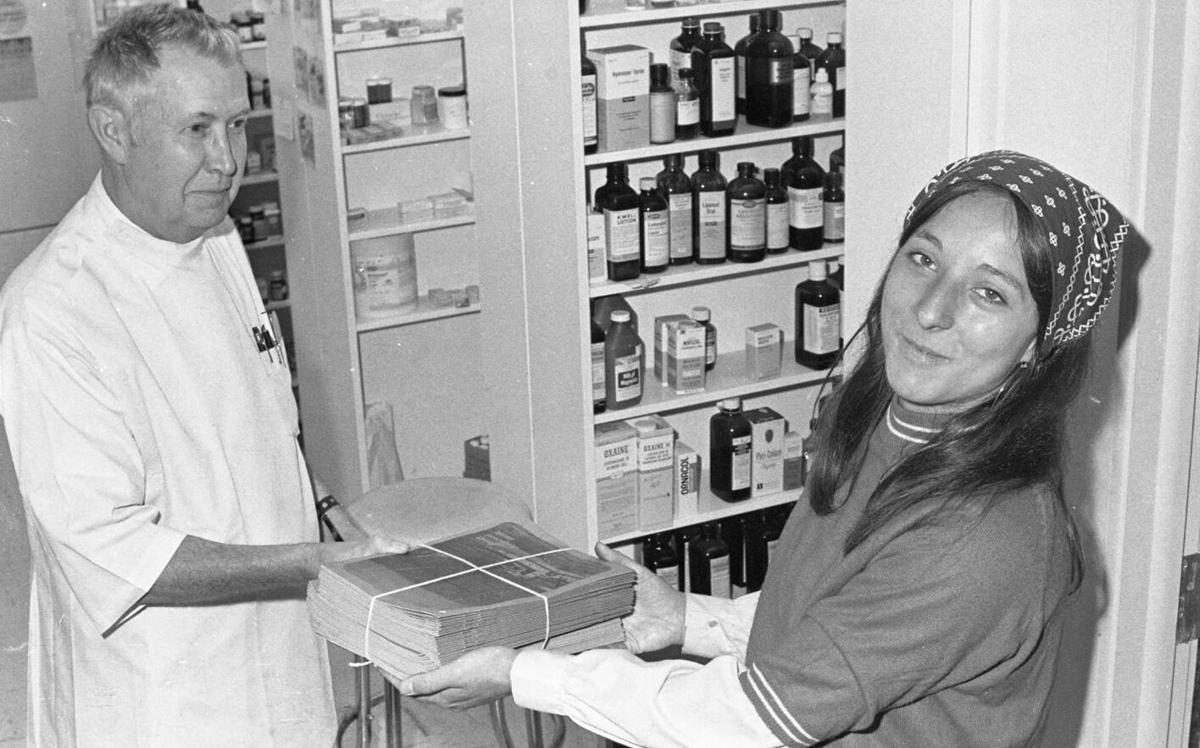 Homes at the east end of the dike heading into Coquille, that seemed to always flood.

Rescuers pull a car out of deep water.

We've read a lot about the Bandon Fire of 1936 and the Columbus Day Storm of 1962, but what we haven't talked as much about was the flood of the winter of 1945. I didn't realize it had been such an important weather event until my friend Diane Blake Lewis sent me a couple of small snapshots of that storm.

Then I began to research the old Western Worlds to learn more about the flood. The pictures simply said "winter of 1945," so I started with the last paper in 1945 and went backwards, finding virtually nothing out of the ordinary. But I knew these pictures were telling a story, and I needed to find it. So, I turned to the Jan. 3, 1946, issue of the paper, and there it was.

The lead headline reads: "Bandon Becomes Host to Many Stranded Travelers During Peak of High Water."

You remember that in those days, there was no Bandon to Coos Bay highway. We had to go to Coquille, through the dreaded dike (in at least one of the pictures) which was often flooded, and then head from there east to Roseburg or north to Coos Bay.

The first picture was taken at the east end of the dike heading into Coquille, which us old-timers remember vividly because of the houses that lined the highway .... and always flooded. It was nothing for the water to cover the entire first floor. After years of floods like this, the structures were finally torn down and the highway was elevated to the height it is today. It still floods, but nothing like the old days.

The second picture also indicates that it was taken along the dike, but I am thinking it may have been a scene east of Bandon in the area of Bear Creek, which often flooded. If you look closely you can see that the old car is being towed, with several guys riding on the back of the towing vehicle.

"Some 200 people, travelers between points from San Diego and British Columbia on U.S. Highway 101, were marooned in Bandon Saturday night and it took the combined facilities of the entire community, including some private homes to afford shelter and rest accommodations. Flood conditions of the highway north and south was the reason.

"The heavy downpour of rain, extending into the third day, had caused flood waters to cover the highway across the dike between Fat Elk and the Coquille bridge to a depth of some 29 inches.

"To the south, Sixes River, Elk River, Rogue and other streams were on a rampage, flooding the highway in a number of places."

Among the people stranded were three busloads of Greyhound passengers.

"Interruption of light and power service for several hours added to the difficulty of serving the stranded folks. Lloyd's Cafe was the only restaurant in operation, but the owners, Mr. and Mrs. Jimmie Camp, managed by candlelight to serve at least sandwiches and coffee to all comers.

"With a shortage of housing facilities under normal conditions, it was impossible to provide sleeping quarters for the unexpected visitors. However, through cooperation of Mayor K.I. Franklin and other city officials, Commander Arthur Dobney of the U.S. Coast Guard station, Legionnaires and citizens in general, all were given at least shelter for the night. All available beds of the coast guard and the local hospital were made available, and the city hall and the Legion hall were kept open and warm for the stranded public. All was done in the spirit of hospitality and without charge."

Many of them even enjoyed a dance at the Townsend hall.

"The undaunted spirit of Jim Walstrom of the Central Transfer Co., U.S. Mail carrier, engaged a small pickup boat, operated on the river by Art Pederson for the fishermen. With Eddie Norton, Central Transfer truck operator at the wheel, the mail took the water route between Bandon and Coquille."

Lindsey, daughter of Jay and Doreen Hess, was a Cranberry princess in 1971, escorted by her brother, Jeff Hess. She graduated from Bandon High in 1972.

It was great to watch Angela Haseltine Pozzi of Washed Ashore as she appeared in person on the Kelly Clarkson show on Earth Day to unveil her latest sculpture, a 13.5-foot-long sturgeon. At the end of the show, Clarkson announced that the Canidae Pet Food company was donating $25,000 to Washed Ashore for their efforts at turning trash into art.

Angela told Clarkson that Washed Ashore, which has generated national publicity for Bandon, has turned approximately 30 tons of trash into 85 sculptures in the last 11 years.

People across the country continue to be amazed by Angela's story as she and her cadre of helpers turn trash into treasures.

I haven't gotten the rainfall information yet for April, but I do know that in March, Bandon recorded 7.07 inches of rain, compared to 5.44 the previous March and 3.20 inches in 2019. My guess is that April will turn out to have been very dry.

You need to pick up a copy of the latest Bandon Buzz, owned and edited by Amy Moss Strong, to see profiles of the candidates, who are running for election on the May ballot. Amy has also given Laurea Arnoldt and me a chance to let people know why we are running a write-in campaign for a seat on the hospital board (position No. 2).

Since the two of us announced that we are running, I also learned that some of the employees at the hospital are urging people to write-in the name of Barbara Snyder, a retired RN, who moved to Bandon a year ago from Arizona where she was the campus director at the University of Phoenix headquarters, charged with ensuring the success of students and faculty, facilities and operations, technology and innovations.

Former Powers school superintendent and Myrtle Point graduate Don Grotting, who is the superintendent of the Beaverton School District, appeared on TV the other night to talk about the epidemic of fentanyl-related deaths in his area.

During the interview, Don said that in 2019 some 70,000 pills containing fentanyl were seized, compared to 700,000 in 2020. I am not sure if that was a state or national statistic, but the increase is definitely alarming.

It has been heartening to see the number of COVID cases continue to go down in Coos County, as we are now in the moderate category and from the looks of our latest numbers, we should stay there or even go down a category.

The latest scam involving a request from a friend appears to be circulating again. I have continued to wonder what's in it for the scammer and I finally figured it out.

This week I received an email from someone purporting to be Shawn G. Jennings (a friend from Coquille) saying she needed a favor from me. "I need to get a Nike Gift Card for my nephew. It's his birthday but I can't do this now because I'm currently traveling. Can you get it from any store around you? I'll pay back as soon as I am back. Kindly let me know if you can handle this."

I decided to go along with their little game and replied: "love to help you. What should I do?"

The person responded: "Great, thanks! Total amount of Nike Gift Card needed is $400 from any store around like Walgreen, Best Buy, 7-Eleven, store, or Walmart store, or CVS store, and you can also get it in Target store too you need to scratch the back of the card to reveal the pin, then take a snapshot of the back showing the pin and forward it here to me online Once again thanks."

My next email was "I am forwarding this to the FBI and the local police."

I did not hear back.

The previous week a similar request came from former resident Lilla Ingram Wallace, asking me if I had an account with Amazon? I responded by saying I was sure the question did not come from her. But "she" responded. "No, I've been trying to purchase a $200 Amazon E-gift card by mail, but it says they are having issues charging my card." And then came the instructions as to how I was to purchase it through my Amazon account and then immediately forward it to her. Ending: "Awaits your swift response."

Someone had definitely hacked into her email address.

The sad part about scams like this is that evidently people do fall for them or they would have moved on to another ploy to part trusting people from their money.