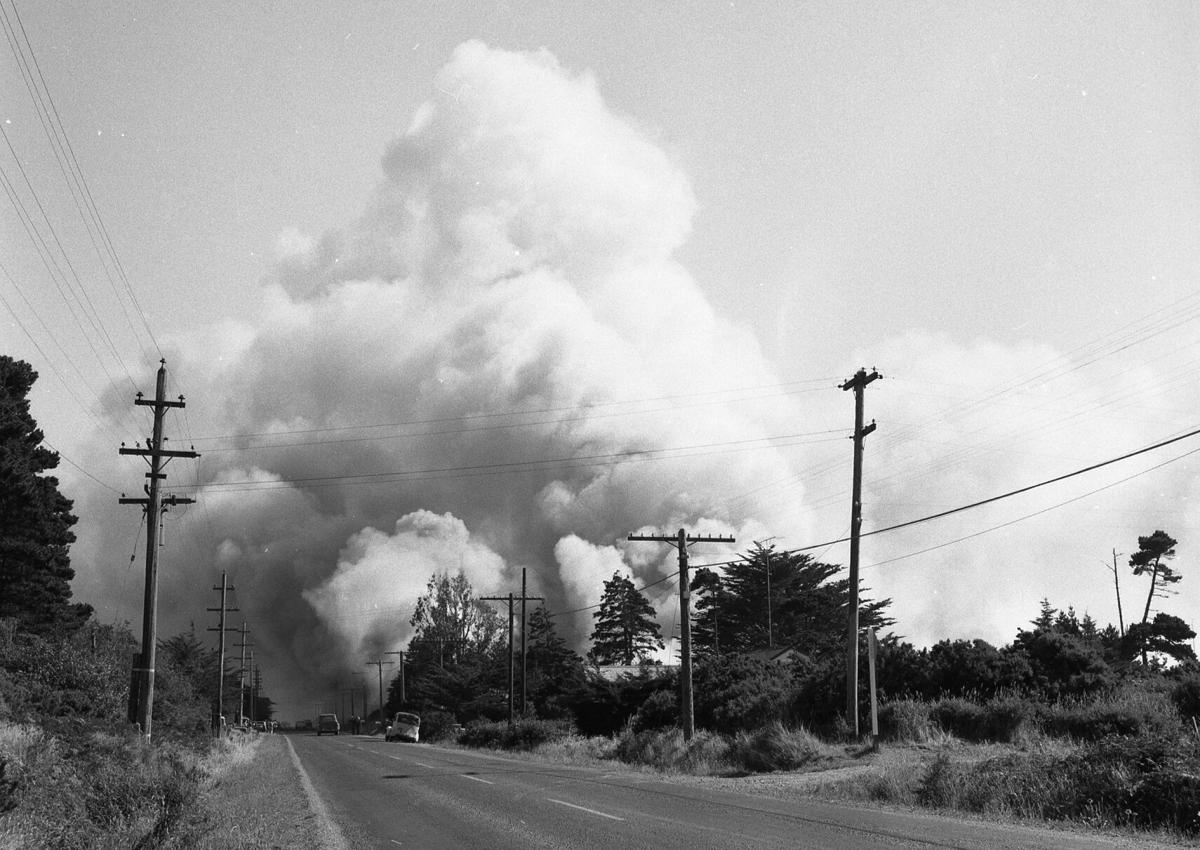 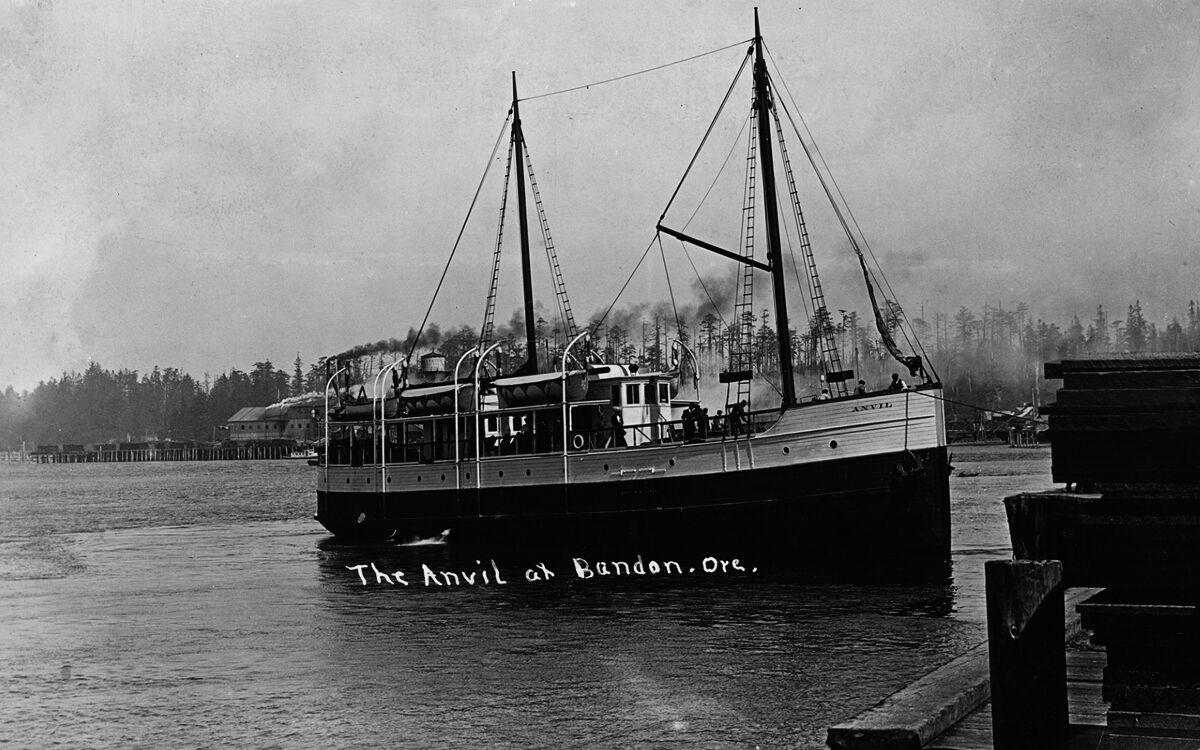 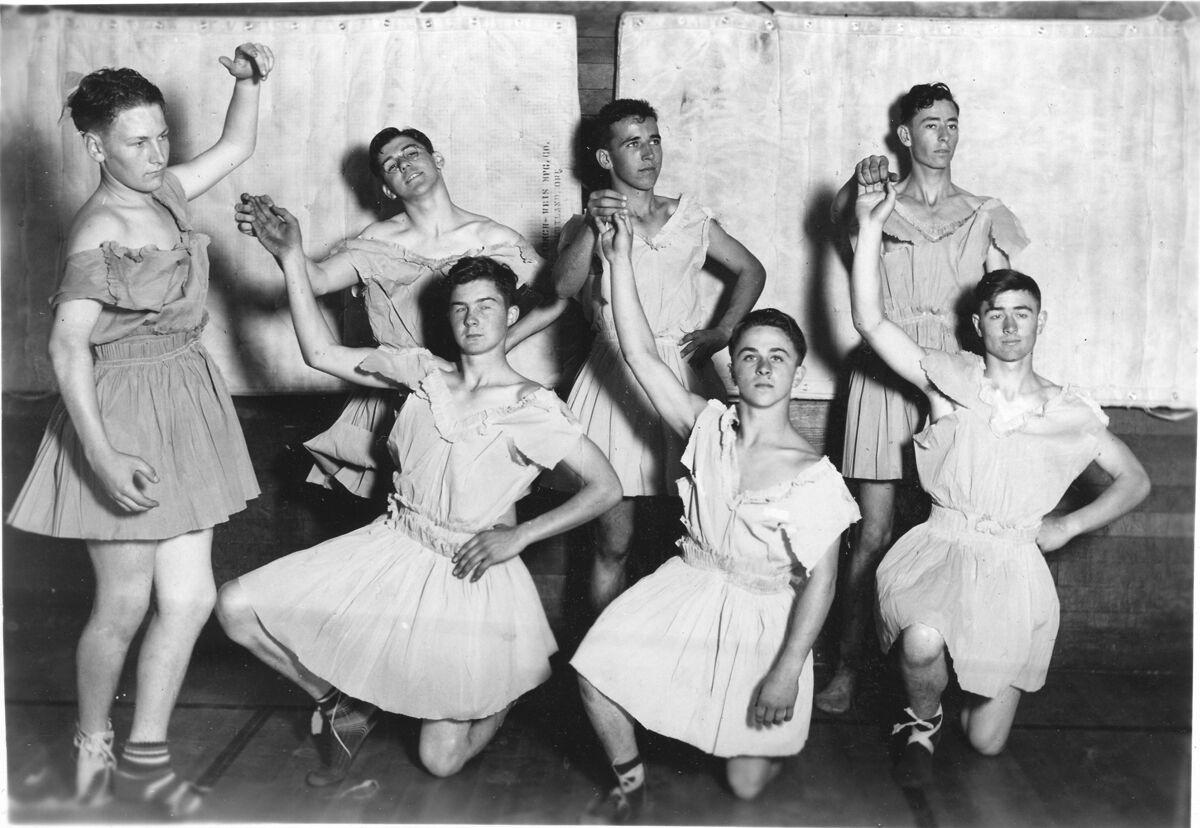 I chose the first picture to go with a story I found in a June 1942 issue of Western World, even though the picture was taken years later in July of 1957 of a gorse fire west of Highway 101. But the message was clear.

The 1942 article was headlined "Fire Trail Is Being Built Around City." This, of course, was less than six years after the disastrous fire of September 26, 1936, which wiped out most of the residential and business districts of Bandon.

Here is, in part, what the article said: "A county-owned bulldozer, with two county men in charge, began work Monday morning to build a fire trail around the city of Bandon. The work is being done under city direction. The machine is loaned by the county without cost but the city pays the fuel bill and the wages of the men in charge. It is estimated it will take from five to 10 days and the cost to the city will be between $150 and $200.

"The trail was started in the southeast part of town where Harlem Avenue intersects East 11th Street. A strip south of 11th from 70 to 100 feet wide is being slashed with the bulldozer, and the Irish furze, dead timber and brush is being piled in windrows so that it can be burned later. This is largely on land east of the Frank Perry sawmill and peeling plant.

"It is planned to extend the trail along the south side of 11th to Franklin, then south to 13th and west to the park."

It then outlined the remainder of the route that the trail would take.

"It is the opinion of Fire Chief C.S. Woomer and other city and county officials, the trail should prove adequate in stopping any fire approaching the city from the east and south. It was from these directions that the fire came into the city in 1936. There are not sufficient trees left in this area to make a crown fire possible, and the fire trails should make it possible to stop any fire on the ground.

"J.H. Fasnacht, public utilities manager, who is supervising the building of the trail, said Monday that the extent of the work must be determined as it progresses. Some spots, where the brush is slight and the danger small, will be skipped, but all in all, it is aimed to make the protective project as effective as possible, for the benefit of the city as a whole, at the least possible cost."

Curly (Woomer) and John would not be happy if they could see how extensive the gorse (Irish furze) problem is today. But this is high on the city council's list and is being addressed in a district-wide approach throughout the city. So, if you get a letter from our gorse guy, please take it seriously. This is a huge problem that needs to be addressed.

The second photo, of the gas steamer Anvil, was probably taken in the early part of the 1900s as I can see the Cody Mill (later Moore Mill) in the background.

In January of 1913, the ship weathered a 75-mile-an-hour gale off the Yaquina bay harbor, which, according to an article in the Oregon Journal, "left the captain and mate looking as if they had been in a fight, and the remainder of the ship's company badly taken up.

"The Anvil arrived this morning at 1 o'clock, after an absence of over a month, during which time she was either bar bound or engaged in fruitless attempts to enter some of the shoal harbors on her route.

"During a fierce gale that struck the little coaster Saturday morning, Captain Levi Snyder was thrown violently on the bridge and had both eyes blackened and his nose skinned.

"The Anvil anchored off the Siuslaw River Friday afternoon awaiting high water to get into that port. The weather looked fine, but before high water they had to heave the anchor and put out to sea. At about 4 o'clock Saturday the full force of a southeast gale hit the Anvil, and she was occupied from that time until 6 o'clock in getting her anchor to the cathead.

"From there she ran for Yaquina bay for shelter, but was unable to cross in after she arrived, so she remained hove to for six hours until the force of the gale was spent.

"Officers and crew are loud in their praise of the manner in which the Anvil behaved in her worst storm."

The third photo was taken in 1940 as Bandon High School student athletes posed in ballet outfits, apparently for some kind of fundraiser. I could identify the four in the front row as Harold Howe, Don Goddard, Chuck Barrows and my uncle, Lou Felsheim.

It's hard to know how to even begin writing about losing one of my closest and dearest friends. Fred Carleton, who died Thursday of a heart attack at Riverbend Hospital in Springfield, was more than just the city attorney, who guided me through numerous pitfalls over the last 17 years, but he was my friend. This summer, former city manager Matt Winkel, Fred and I spent many Fridays at Pacific Dunes eating lunch and perfecting our putting at the Punchbowl. We had so much fun, talked a bit of politics and just enjoyed each others company.

I often turned to him for advice, and I knew I could always count on him to be there for me. I didn't necessarily always agree with him ... but I appreciated him so much and almost always followed his advice.

I am still trying to wrap my head around what has happened as it was so sudden and so final.

He was such a devout family man, loving Gina, his four children and his grandchildren with all his heart. As I read so many people's remarks on Facebook, I know how many lives he touched and that he had enough love for all of us. And we all have our own precious Fred Carleton story. I know I do.

After learning that no one has filed for Position No. 2 on the board of the Southern Coos Health District, I have decided to run a write-in campaign for the seat.

My good friend and long-time city councilor Brian Vick served on both boards for many years, and never felt there was a conflict of any kind. I was elected to the hospital board in 1962 at the age of 23. Later, in the early 2000s, I served again on the board. Our hospital is vitally important to the community, and I feel that I can make a contribution to its long-term health.

I hope that when the ballots come out, you will write in my name for Position No. 2.

Last week, I mentioned that I was surprised to learn that local plumber Stan Avery and his wife Theresa were running for two seats on the school board (against incumbent chair Angela Cardas and Marie Simonds), as the Averys have always home-schooled their children.

After he contacted me, I told Stan that I would share their statement with my readers. Here is what he had to say.

"Our decision to opt for private education for our children was personal, but our reasons to run for Bandon School Board are community based. We chose private education because we could. Nearly one fourth of U.S. public school teachers do so also, for their own children, for the same reasons.

"Most parents do not have the practical option of private education. We know many of these families. Their children may hopefully stay on to become business owners, employees, professionals and parents here in Bandon. Our main goal is to be a voice for those parents, to maximize their informed and personal involvement in the current education of their children in our schools. In particular, we intend to thwart the agendas of outside Marxist radicals to introduce what they call 'critical theory,' a century-old European scheme to erode family, faith and liberty. It has already been injected into many urban districts, despite parental opposition, and we hope to at least keep it out of our schools here in Bandon."

Matt Jarvis, long-time journalist who edits Epuerto News, had an interesting take on what is happening in Coos Bay, particularly in the area around Safeway and Fred Meyer in the south end of town.

He is promoting what is called Neighborhood Watch. "With the number of transients in the area, it's a great solution. Walked downtown Sunday. Kind of scary these days. Saw more transients than anyone else, going through garbage cans, sleeping in doorways. And the garbage build up under the Coalbank Slough Bridge continues. As I drove past, a guy urinating in the field waved at me. I feel sorry for Fred Meyer and Safeway. Unfortunate victims. As the weather gets warmer, the transient problem will only increase. Hopefully the Bay Area can come together for a solution. It's not the homeless community that's the problem, but the transients cruising through with no regard for those who live here. They are your shoplifters, trespassers, UEMVs, mail theft, warrant arrests with no jail time, and disorderly on the police logs. They burn the community and then run to the next one. We're not alone; unfortunately this problem is seen in most towns."