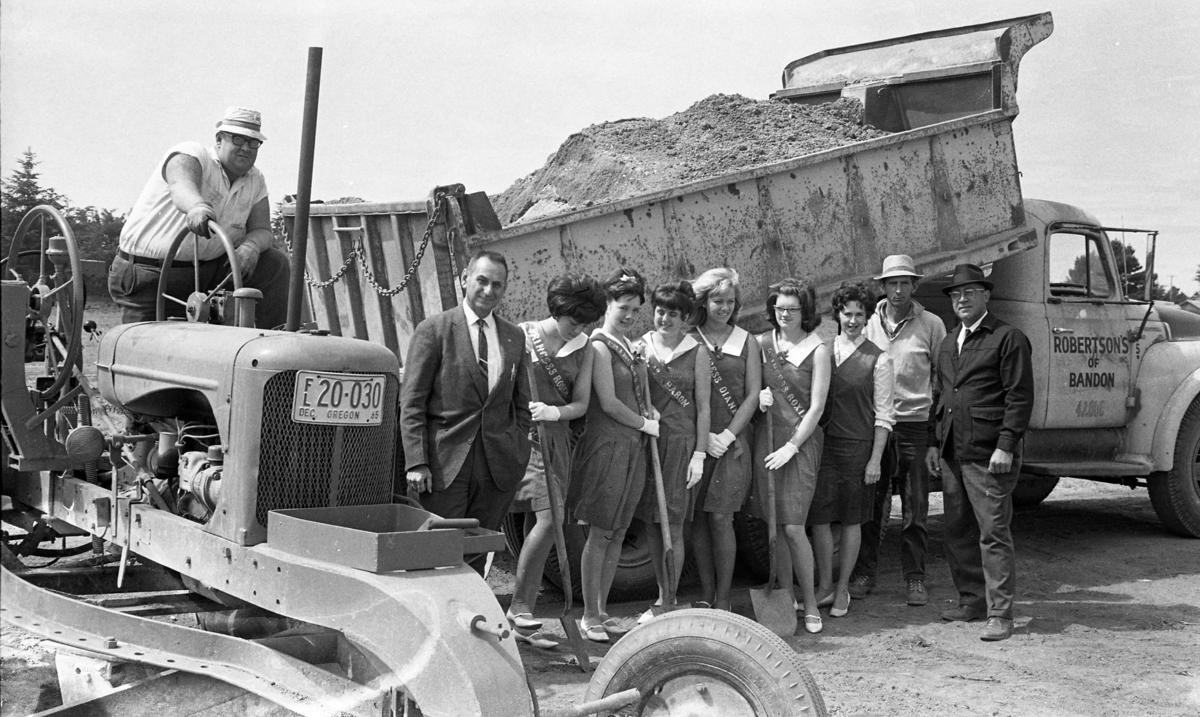 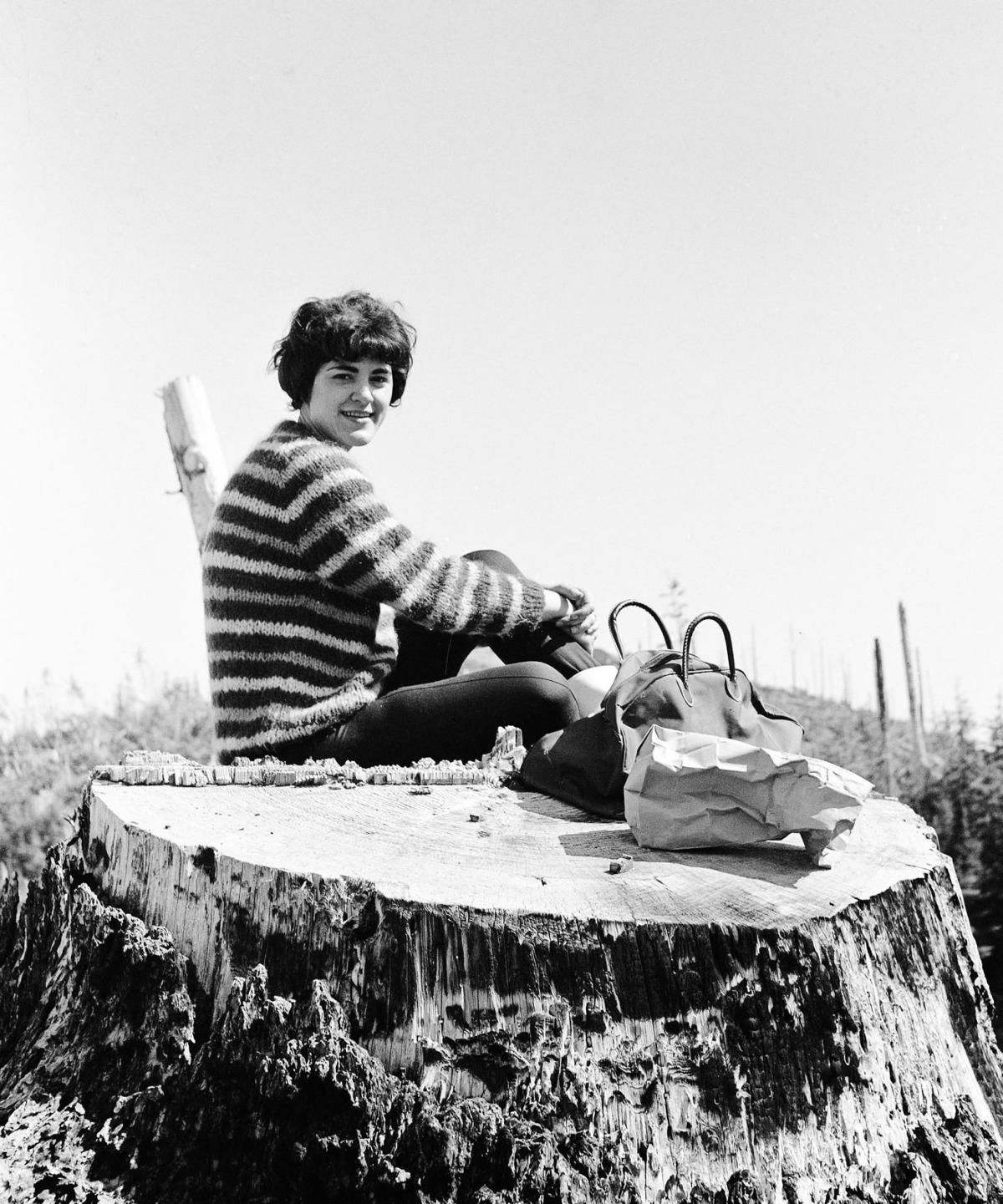 The first picture I am sharing was taken in December of 1957 by my uncle, Lou Felsheim, who was a pilot in addition to being publisher of Western World. This is the hangar at the Bandon Airport, which was formally dedicated in August of 1958 with a big crowd, including many who had flown in for the occasion.

I have dedicated an entire book to the Bandon Aero Club, and on the front cover is Melvin Boak giving the dedication speech. I know Melvin was not a pilot, so my guess is he was probably the president of the Chamber of Commerce. Others taking part in the dedication ceremony were Chet Raines, Howard Kehl, School Superintendent Roland L. Parks and Mayor Eddie Waldrop. Kehl was the sparkplug behind the formation of the Bandon Aero Club and the airport project in general. The road leading from Highway 101 to the airport is appropriately named Kehl Road. Later the Aero Club built their clubhouse along with an office on the south end of the hangar building, which served for many years as Frank Crook's office. His business of repairing planes is now carried on by his sons, Wayne and Brady Crook. Over the years, a number of new hangars have been built, most of them privately owned.

The second picture was taken in 1965 and features the Cranberry Festival princesses posing at the site of the football field parking lot, which was under construction. On the equipment is long-time police officer Sid Dominy. Supt. Roland L. Parks is pictured with the princesses, Rosemary Tiffany, Sharon Strain, Sharon Ward (who was later crowned queen), Diane Blake and Roxie Seat. Others are Carol Kreutzer, princess chaperon; Doyle Greene, employee of Robertson's of Bandon, who was hauling gravel to the site, and Dave Philpott, a member of the festival committee.

I am sharing the third picture, taken of me at a Moore Mill tree planting site in March of 1966 when I accompanied my sister Maggie's class to the event to do a photo feature for Western World. Oregonian columnist Steve Duin used this photo when he wrote a column about me in March of 2015, detailing how I had saved 30,000 Western World negatives from being hauled to the dump. I carried the many boxes of negatives with me for over 30 years before Jim Proehl and I began scanning them into the computer. These are the photos that I now share each week in my column. If you'd like to read the article that Duin wrote just Google: "Mary Schamehorn by Steve Duin" and it will come right up.

I looked back at Gerry's figures for May and saw that he recorded 0.20 inches for 2018 compared to 4.18 inches the previous year.

The latest figures I have from my Prosper pal Frank Sproul (of Upper Valley Builders) are for March, so I will show how much they differ from Gerry's numbers which come from his in-town gauge.

I did talk to Frank and he says his rain gauge is at the top of a hill, which could account for the huge increase. But he says there is another guy in town who has recorded pretty much the same amount of rain.

But he finally did agree that maybe it's time to purchase a new rain gauge, and after he told me that he had recorded 150 inches for the 2016-17 rain year, I thought that would be a good idea. Or maybe it was the 2015-16 year, just not sure.

I was shocked when I opened my ComSpan bill this week and found that the monthly charge for my Internet and one land line had gone from $61.05 to $90.21, without so much as a word. There was an attachment that said a $5 fee is being assessed to all invoices sent through the U.S. Post Office. I could possibly understand that ... but an additional $29.15? To make matters worse I also pay the bills for the Continuum Center and that cost, to serve the entire billing, is just a little over $50 a month. My account serves one person ... me ... and it's $40 more?

I posted my concerns on Facebook and it appears that I am not the only disgruntled customer.

I will call them and protest this bill, and if I don't get any satisfaction, it may be time to look for another service provider. Most people seem happy with Charter (Spectrum).

I also have Dish TV and even though I do not have Showtime, HBO or pretty much any of the "extras" except a DVR, it is now over $100 a month. And there's my iPhone 7 which is $85. Technology is pretty expensive, but I can't imagine being without it ....

The Chamber of Commerce is still advertising for an executive director to replace Julie Miller, who resigned several months ago. In the meantime, Cathy Underdown is serving as interim ED, and is available at the Visitor Center on a part-time basis.

The deadline to apply for the job is Friday, July 27, and interested people are invited to submit a cover letter and resume to sheila@edgewaters.net as board member Sheila Langenberg is now helping with the search.

I learned that Bob Campbell, a former resident of Beach Loop Road who was a substitute teacher on the South Coast for three decades, died on July 8. He was a graduate of Coquille High School.

I do know that he often taught in the Reedsport School District and was a good friend of former Bandon superintendent Kenny Kent, who posted on Facebook about his death.

People are reminded that the July Alive After Five is set for this Friday night, July 20, from 5 to 8 in Old Town, with wine glasses available for $10 at the glass picnic shelter on the port dock at 5. Lachlan Miller will also be performing some vocal music selections at Second Street Gallery, accompanied by Crystal Landucci on the keyboards and Candace Kreitlow on the harp.

I often see corrections in the Curry Coastal Pilot, which I have subscribed to for several years. But I saw one this week that shocked me and made me wonder if it would result in a lawsuit ... rather than just a simple "clarification."

The July 7 front page article indicates that the Lobster Creek fire was under control, with a very large subhead which read: "Campers claim responsibility for igniting blaze."

If you were following the story, you know that it started in the area of the Lobster Creek Youth Campground, but until I saw that headline, I had not read anywhere that anyone was accepting responsibility for starting the fire. But it said that the leader of the group who was camped there told the county parks director that they "will take responsibility for the 397-acre wildfire and have insurance to pay for the costs to extinguish it, Sheriff John Ward said Friday."

Wow. What an admission, I thought.

But the next issue of the paper, July 11, had a completely different story. "The leader of Rogue Climate campers, Lauren Regan, executive director of the Civil Liberties Defense Center, did not tell Curry County Parks Director Josh Hopkins the group accepted responsibility for igniting the blaze that has consumed almost 400 acres. The Pilot regrets the error."

Wow, I am sure they do. This is way beyond a simple typo or inaccurate reporting. That is a huge mistake and I am sure we have not read the last of it.

People are reminded that there is a free household hazardous waste collection event at the Beaver Hill transfer site set for Saturday, July 28, from 9 a.m. to 1 p.m. They are asking that people call 541-396-7624 to make an appointment to drop off their household waste prior to the day of event. Best time to call is Tuesday through Friday from 9 a.m. to 1 p.m.

Get a summary of today's local news on the go with our Daily Headlines newsletter.

Which season are you?