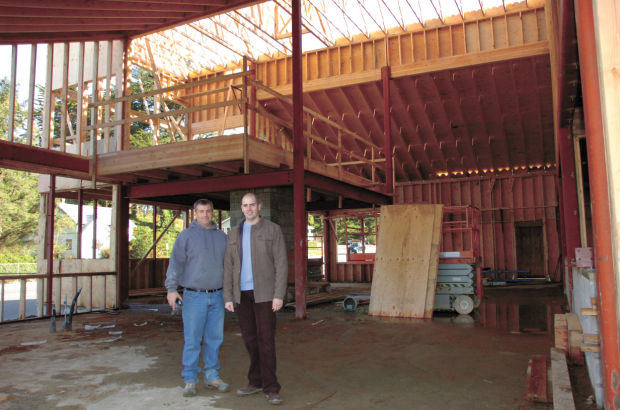 Face Rock Creamery developer Greg Drobot, right, and project supervisor Daniel Graham pose inside the almost-framed building on U.S. Highway 101 and Grand Avenue, on the same site as the former cheese factory. Construction is ahead of schedule. 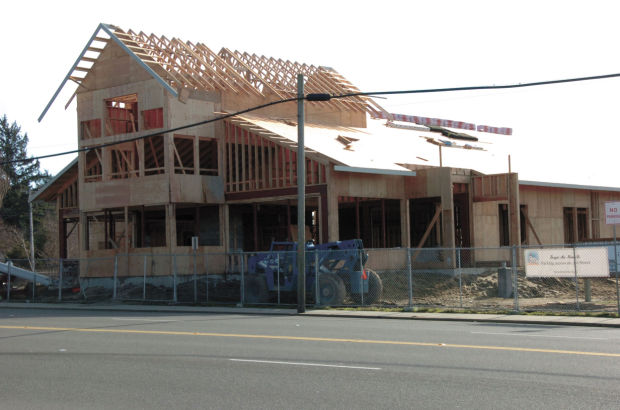 A view from the exterior of the Face Rock Creamery that faces U.S. Highway 101.

Face Rock Creamery developer Greg Drobot, right, and project supervisor Daniel Graham pose inside the almost-framed building on U.S. Highway 101 and Grand Avenue, on the same site as the former cheese factory. Construction is ahead of schedule.

A view from the exterior of the Face Rock Creamery that faces U.S. Highway 101.

BANDON — It’s a dream coming to fruition for many. Even residents who drive by the site daily see something new each time as construction of the Face Rock Creamery continues at a clipped pace.

The final trusses were put into place last week and the building is almost to the weather, with roofing to begin this week. Windows are expected to be installed next week.

Developer Greg Drobot says they are ahead of schedule and he hopes the much-anticipated cheese factory will open by early May.

“It’s coming together well,” Drobot said of the 6,000-square-foot building. “It’s on a very rigorous schedule.”

The loft area, accessed by a staircase, will feature a two-story fireplace and windows that will provide a view of the river and ocean. The loft will be home to a restaurant that will offer wine, beer, soups and pannini’s and other limited menu items showcasing the cheese made downstairs in the building.

“We achieved what we were trying to do with a big, open area,” Drobot said. “But it is a factory and we want people to remember that.”

The main attraction, of course, will be the cheese making. Plenty of windows will allow visitors to watch the process, from the hand-cheddering to packaging. Samples and packaged cheeses for purchase will be in cases in front of the windows and a refrigerated case for cheese, including some high-end cheese from other Oregon creameries that can be purchased to order.  Freezer cabinets featuring Umpqua Ice Cream will be located near the north wall of the building.

Just past the entrance to the building on the west side, a long hallway on the right will lead to offices and employee areas, and will be dotted with photos of the history of cheese making in Bandon. That same hallway will lead to public restrooms being constructed by the city (see sidebar). The restrooms also will have an entrance outside the building.

“We’re just really excited about the whole thing,” City Manager Matt Winkel said. “There’s no doubt now that it’s a real project and it’s going to happen. We’re just trying to make sure our portion of it will be coordinated and done at the same time.”

A 30-foot by 30-foot cold storage area will be located on the south end, just before the loading dock.

“There are a lot of windows and views both upstairs and down,” Drobot said, “And a lot of steel in the construction. It’s always good to over-engineer it a little, though it costs me more.”

One person on site almost continually is Daniel Graham. Graham, a Bandon resident who also serves on the Planning Commission and is the city’s volunteer animal control officer, has been Drobot’s right-hand man since the idea of building a new cheese factory was born. He represented Drobot at many City Council meetings and has gone through every step of the time-consuming process of planning, permitting, designing and constructing the building with Drobot.

“He’s been instrumental,” Drobot said. “Without his input and help, I wouldn’t be doing this project. He’s very hands-on and we want that for quality control. He’s also very good at multi-tasking.”

Interior work is out to bid. Graham, who has a construction background, and Drobot will help with some of the interior work themselves, including dry wall and some interior finishing, as well as installing equipment.

Cheesemaker and former Bandon resident Brad Sinko, hired by Drobot from Beecher’s Handmade Cheese in Seattle, has been making cheese with Drobot once a month in rented space at a creamery in Central Point so there will be cheese on the shelves when the factory opens.

Face Rock Creamery also will be hiring soon and is accepting applications. Barrett Business Services of Coos Bay, owned by Bandon resident Barry Winters, will manage the hiring process, though Sinko, Drobot and Graham will make the final decisions. Drobot expects to hire between 10 and 15 employees initially, in addition to seasonal help.

Local contractors have been used as much as possible, including the concrete work and the plumbing. The project’s general contractor is from Eugene.

“It’s great to see it all coming together,” Graham said.

For more information on the project visit www.facerockcreamery.com.