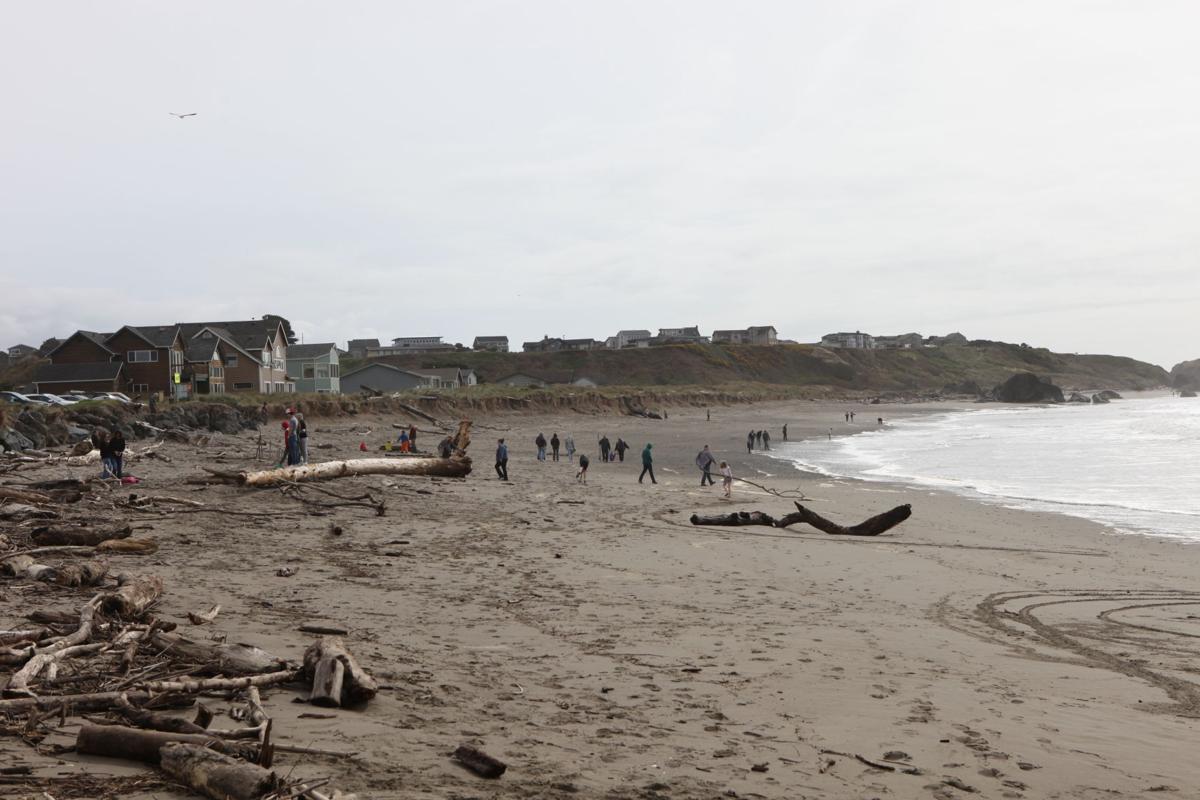 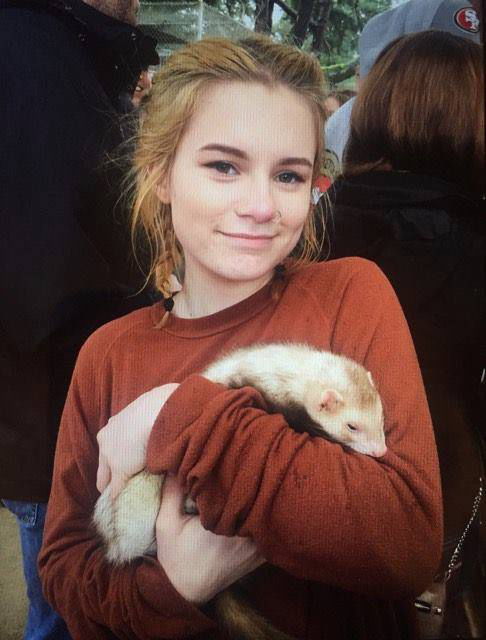 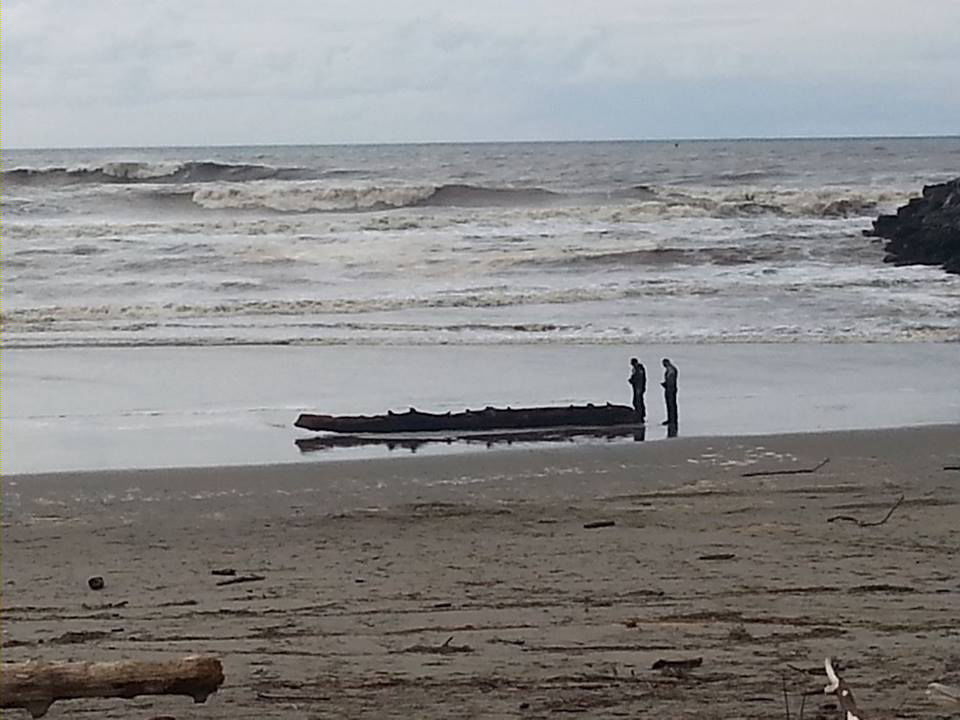 Officers measure a log on Bandon's South Jetty Park beach following an accident that killed a 14-year-old Eugene girl, who was trapped in the surf after the log rolled onto her Saturday afternoon. 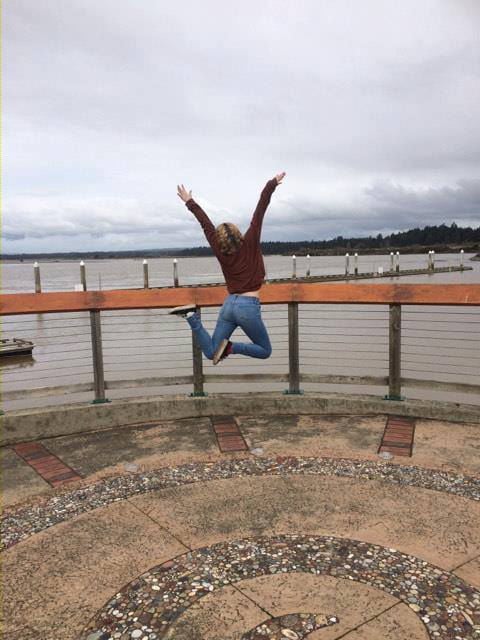 14-year-old Aurora Genai Sheffel is pictured earlier in the day on March 25 on Bandon's boardwalk. She died later that day after a log trapped her in the surf on Bandon's South Jetty Park beach.

Officers measure a log on Bandon's South Jetty Park beach following an accident that killed a 14-year-old Eugene girl, who was trapped in the surf after the log rolled onto her Saturday afternoon.

14-year-old Aurora Genai Sheffel is pictured earlier in the day on March 25 on Bandon's boardwalk. She died later that day after a log trapped her in the surf on Bandon's South Jetty Park beach.

BANDON – A 14-year-old Eugene girl died Saturday afternoon when a log rolled on top of her, trapping her in the surf on Bandon's South Jetty Park beach.

According to Oregon State Police, emergency personnel responded to South Jetty Park beach at about 4 p.m. March 25, after being called to a report that a log had rolled on top of a juvenile. Once emergency crews arrived on scene, they discovered the girl had sustained life-threatening injuries.

Preliminary information indicates that Aurora Genai Sheffel, from Eugene, was playing on a log in the heavy receding tide, when the log rolled on top of her. Witnesses were able to remove her from underneath the log after several attempts.

Despite efforts of a responding Bandon police officer, who administered CPR, and the paramedics who performed life-saving measures, the girl succumbed to her injuries. She was pronounced dead at Southern Coos Hospital in Bandon.

According to her mother, Cora Sheffel Wederquist of Eugene, Aurora was a freshman and a straight-A student at North Eugene High School, where she was a flyer on the varsity cheer team, an unusual accomplishment for a freshman. It was the first day of spring break and Aurora and some of her friends had come to Bandon with the parents of one of them. Wederquist was not on the trip. The weather was windy that day, and there were not a lot of people on the beach, according to Coos Bay photographer Steven Michael, who said he came upon the scene's aftermath, and was told by a bystander that the victim had just been pulled from the surf.

“Emergency personnel arrived and proceeded to deal with the girl's injuries,” Michael said. “A woman came and brought blankets to the traumatized soaked friends who were cold, wet, crying and in shock," Michael said. "She told them, 'you need to stop and pray right now, it looks like they're losing her.'"

“I saw a man standing alone looking distraught and in shock while watching the ambulance drive off with lights and siren blaring. He was holding a child's plastic beach bucket and a pair of wet shoes.”

Wederquist said she was told her daughter did not have her back to the water, nor was she taking a “selfie” when the accident happened, as some reports have stated. Aurora and a friend were standing on the log, and another friend was taking photos of them, her mother said. She was sent that last photo of her, showing the two girls standing on the log, looking toward the surf, with a seemingly innocuous wave coming in. Her stepfather, David Wederquist, said he was told that her friend jumped off the log after the photo was taken, but that Aurora did not.

“She turned her head and it happened,” Cora Wederquist said. “I spoke to her friend that tried to help her. A 14-year-old girl tried to move that log herself, but more water came and rolled it on my daughter. She said it was so quick and that Aurora felt no pain.”

Wederquist said her daughter was a kind, genuinely caring person with an infectious smile.

“She worked hard and gave 110 percent to everything she did. She was hands down the best big sister anyone could have.”

Aurora had a 10-year plan, her mother said. She was going to graduate from high school early, start at Lane Community College, then transfer to Oregon State University to seek a degree in marine biology.

Aurora leaves behind two sets of parents, her grandparents and five younger siblings. A GoFundMe page has been set up by Aurora's aunt, Kayli Keyes, to help her parents with funeral expenses. It can be found here:

More information will be released about the accident when it becomes available. OSP issued this safety tip from the Oregon Parks and Recreation Department, State Parks: The ocean is strong enough to pick up even the biggest log and roll it down on top of you. Some logs may look small, but even the tiny ones can be waterlogged and weigh tons. How to play it safe: If you see a log in the surf or on wet sand, stay off it.