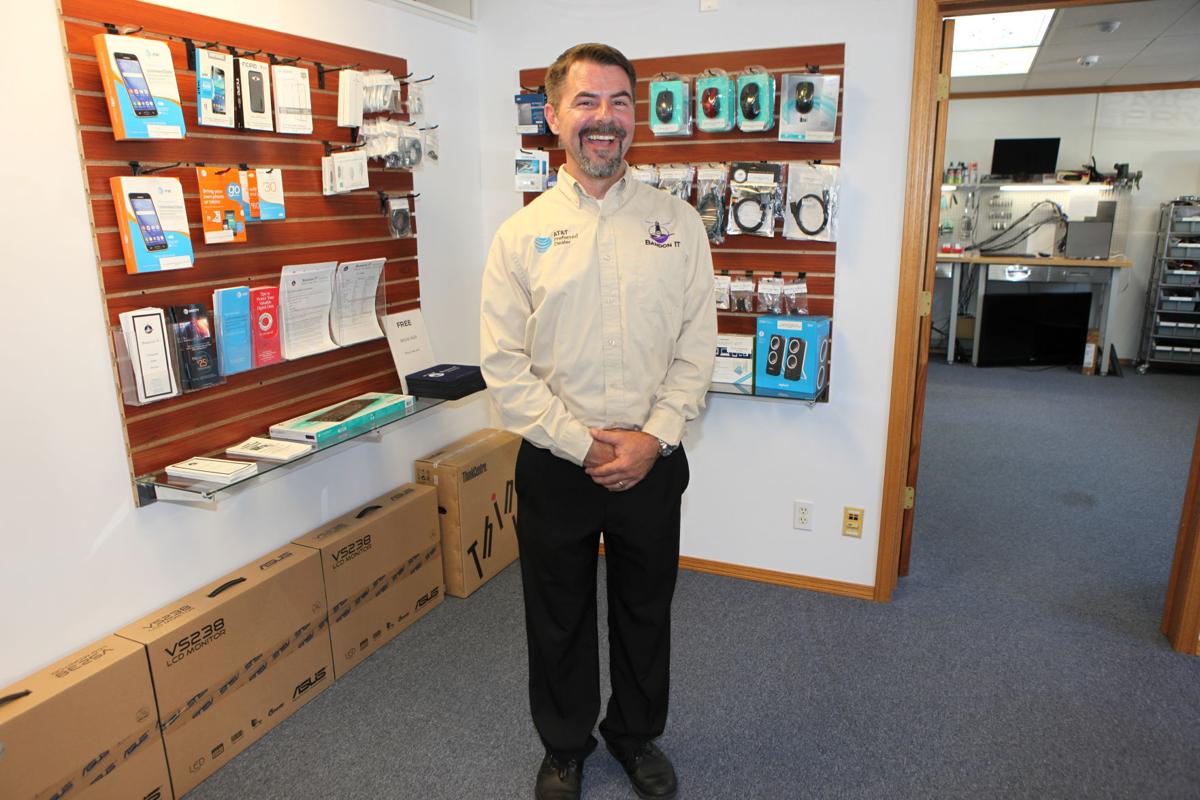 Aaron Barnes, owner of Bandon IT. 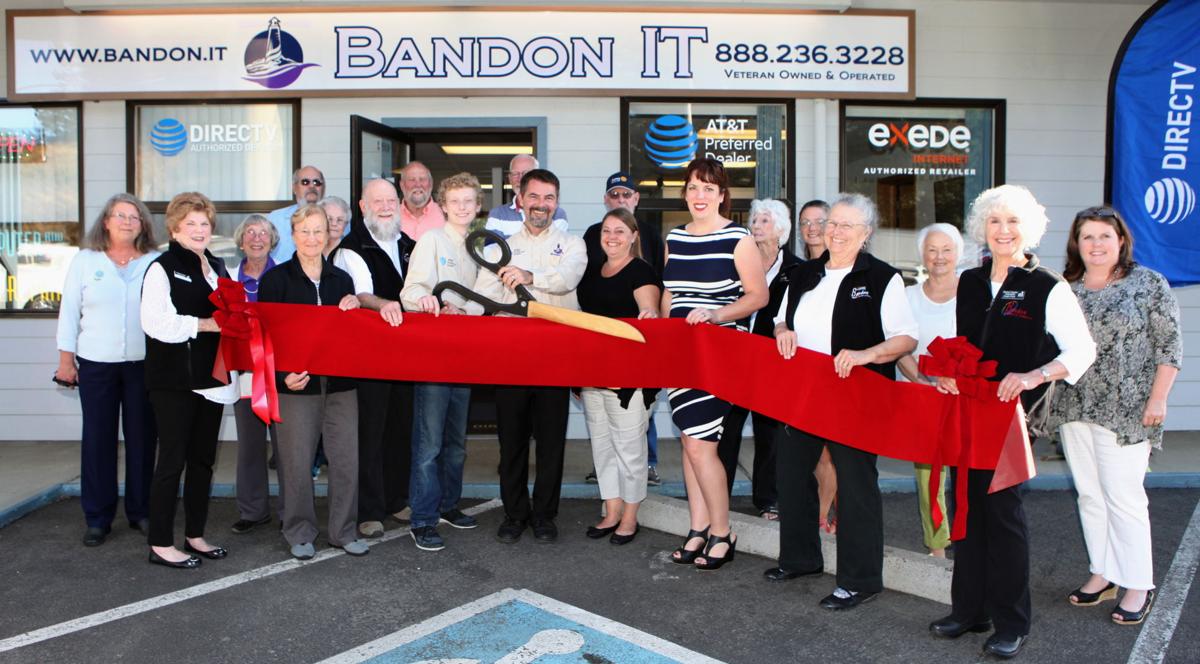 Chamber of Commerce ribbon cutting for Bandon IT. Owner Aaron Barnes, his wife Robbin and employee Brandon Parks are in the middle. 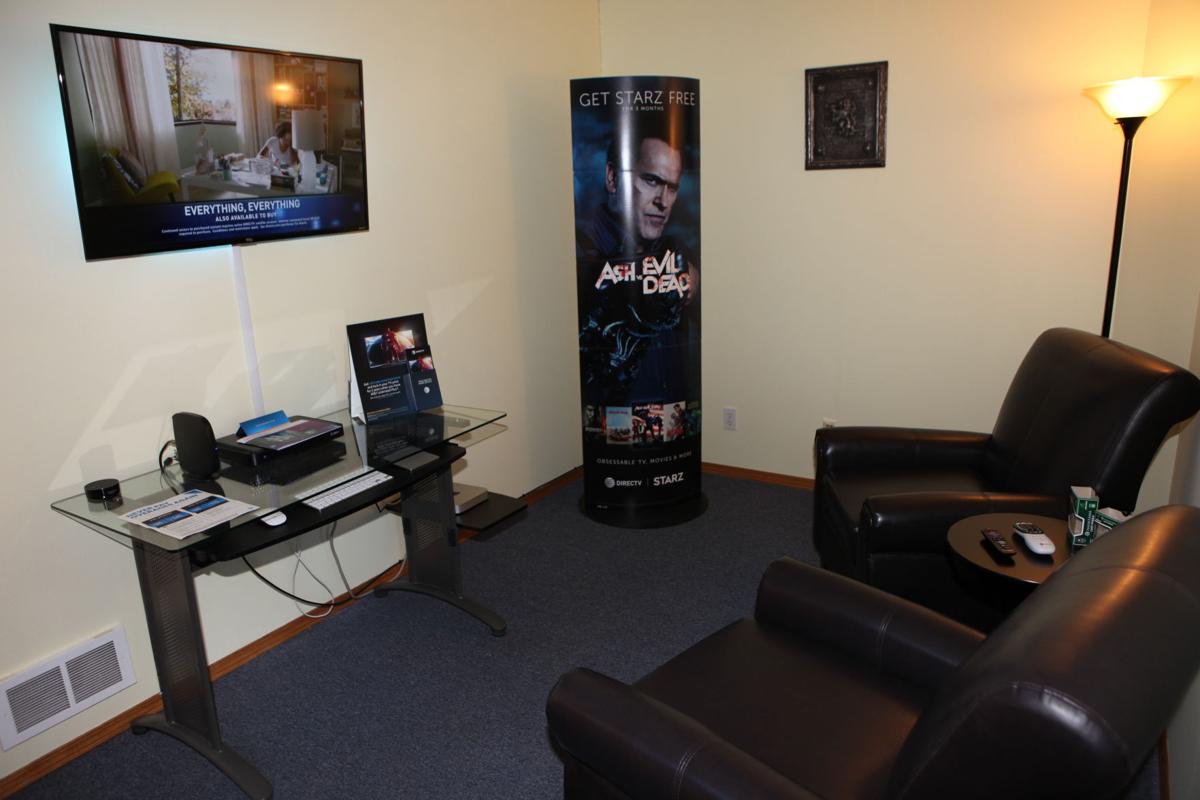 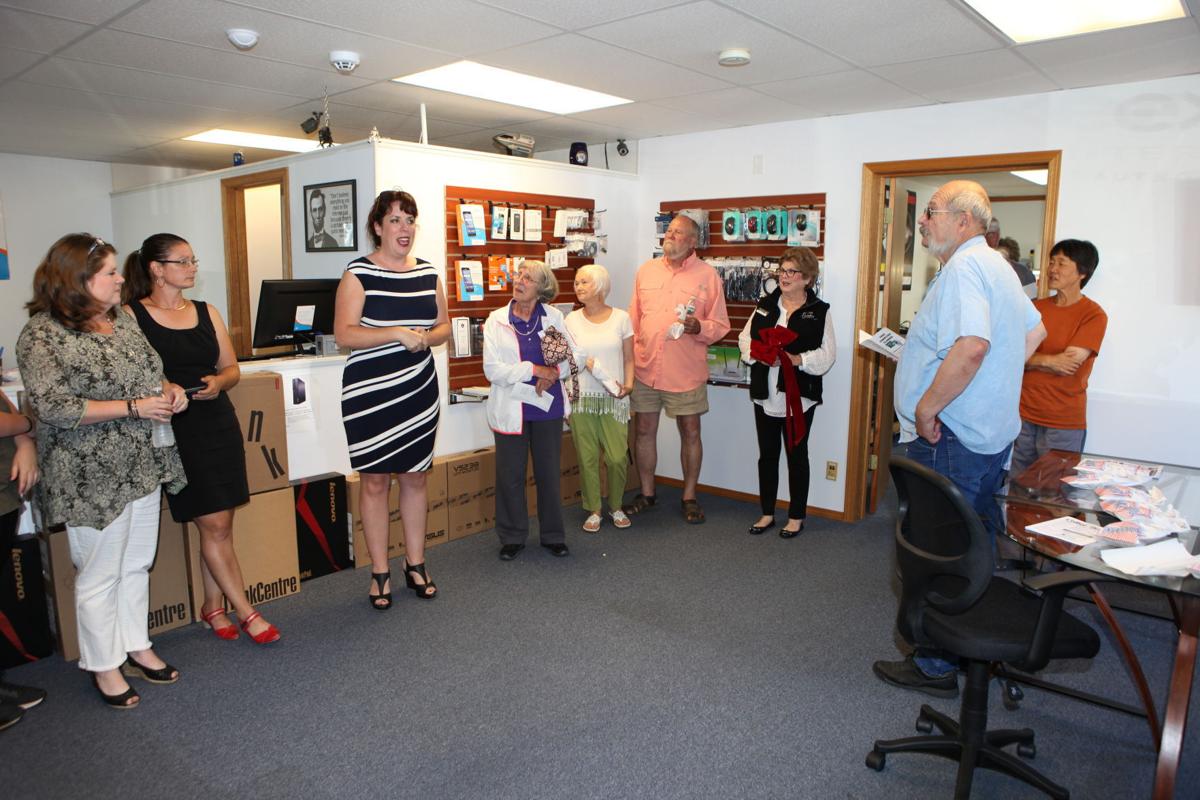 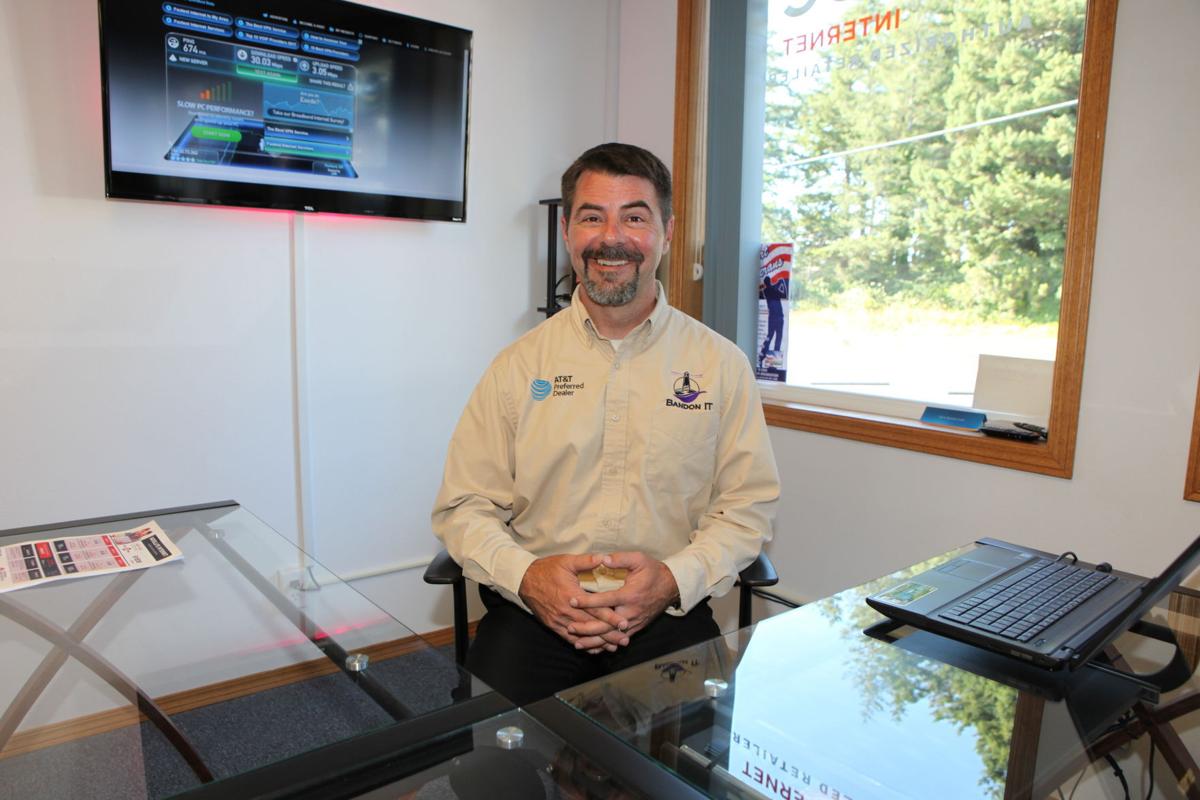 Aaron Barnes of Bandon IT in his new, larger store.

Aaron Barnes, owner of Bandon IT.

Chamber of Commerce ribbon cutting for Bandon IT. Owner Aaron Barnes, his wife Robbin and employee Brandon Parks are in the middle.

Aaron Barnes of Bandon IT in his new, larger store.

BANDON -- Aaron Barnes couldn't decide what he wanted to do when he grew up.

Barnes, the owner of Bandon IT, has finally found his true calling, and is offering his his skills and expertise in the information technology and computer repair business. Bandon IT has also recently added DIRECTV services, Exede Satellite services and is selling AT&T pay-as-you-go phones and plans.

"People can truly get what they need in computer, satellite TV and phone technology at Bandon IT, said Chamber of Commerce Executive Director Julie Miller. "And it's a service not offered by anyone else in Bandon."

Barnes, a native of Eugene, moved a lot as a child. When he graduated from high school in Susanville, Calif., in 1990 at age 17, he immediately joined the U.S. Navy, and eventually ended up on the East Coast in Norfolk, VA for his four-year tour. After the Navy, he decided to stay in Norfolk, where he got into the hotel industry.

Through promotions with Marriott, he moved to Richmond, then to Florida. He was recruited into Marriott's management training program and became the hotel's banquet director, catering for conventions, weddings and other events.

"If was fun, then I got bored with it," Barnes said.

He quit, with nothing lined up to do. But he soon got bored again, so decided to sign up for truck driving school. He became an over the road truck driver, traveling to all 48 contiguous U.S. states and visiting friends around the country for a year.

He then decided to go back to Susanville to help with his family, and drove a chip truck locally for another two years. While doing that, he returned to school to earn his Emergency Medical Technician certification, eventually becoming an EMT for a REMSA (Regional Emergency Medical Services Authority.)

Barnes spent 13 years working on a ground ambulance as an EMT with two days on and five days off.

"I'd get really bored on those five days off," he said. "Friends were telling me to open a computer business on the side since I'd been helping them with their computer-related issues at work."

So Barnes started Lassen PC out of his home in Susanville. The timing was good, and the business grew quickly. Within a year, Barnes had opened an office outside his home and hired two employees. That was in April, 2006. In those 11 years, Lassen PC has continued to grow. Barnes moved into a larger office and added a conference room. He continued working for the ambulance company until August 2015.

He met his wife Robbin, who is from Washington, about 13 years ago, and he has three step-sons ages 26, 25 and 21. The eldest, Chad, is a firefighter with the U.S. Forest Service, the middle son, Mark, is a Coos County Sheriff's Office deputy, and the youngest, Daniel, still lives in Susanville. The couple has two grandchildren and another one due in December.

After their youngest son graduated from high school, Aaron and Robbin started talking about moving from Susanville.

"We were looking for a place we would want to retire to and thought we'd move there now," Barnes said.

In 2013, they starting taking monthly trips up and down the coast. They finally settled on Bandon and bought their home here in October 2014. Robbin works as a nurse for a nursing facility in Coos Bay.

Barnes decided to keep the business in Susanville and started making the trip - all 734 miles - back and forth to Bandon once a week. Now he doesn't make the trip as often, but still holds video conferences regularly with his employees at Lassen PC. He has two full-time employees there, plus an accountant who keeps the books for both businesses.

The Bandon store was first opened in 2015 next to Sunshine Chiropractic in the offices located on Highway 101 just east of Face Rock Creamery. It was a small office, 460 square feet, that Barnes quickly outgrew. With 1,110 square feet in the new office, Barnes has more than enough room to grow the business. The new office has space for a large workroom, a reception area and a room off the main entrance outfitted with two cozy recliners and a television, for anyone who might have to wait.

Barnes hired Brandon Parks, a Bandon High School student, to help him with computer repairs. Parks works fulltime in the summer and part-time during the school year. Barnes is looking for a sales associate who can help with the new services Bandon IT offers.

Bandon IT has a host of commercial services to fit every customer's needs, from local and offsite data retention, business continuity services, workstation and server maintenance, to remote and onsite diagnostics and troubleshooting. Bandon IT works primarily with PC (Windows) and Mac (OSX) software and hardware.

For residential customers, Bandon IT also provides remote and on-site computer repair, as well as proactive maintenance to assist in keeping customers' computers from having to be worked on again in the near future. Cracked screen repair for iPhones, laptops and iPads is a common specialty as well as DC jack replacement.

Bandon IT is also an Exede Internet authorized dealer. Exede can be a solution for residents and businesses out of the city who would like fast and reliable Internet service. Barnes said those customers can get high-speed Internet even if they have never been able to previously.

Bandon IT is also an AT&T preferred dealer and a DIRECTV authorized dealer. DIRECTV is the highest rated TV provider in the United States on customer service and satisfaction, Barnes said. He contracts with local installers to bring the new services to homes and businesses in the area.

"I'm the only company in Bandon providing these services," Barnes said. "That's the reason I'm doing it, from customer requests. The people of Bandon asked, so we are providing."

Bandon IT's mission statement is "Do the right thing" and Barnes lives by that philosophy. He is also involved with CyberLynx, teaching free computer classes at the Bandon library, and is a member of the Bandon Rotary Club and the Bandon Chamber of Commerce. As Queen of the Kitchen Sponsor for the upcoming Cranberry Festival, Bandon IT will have booth there.