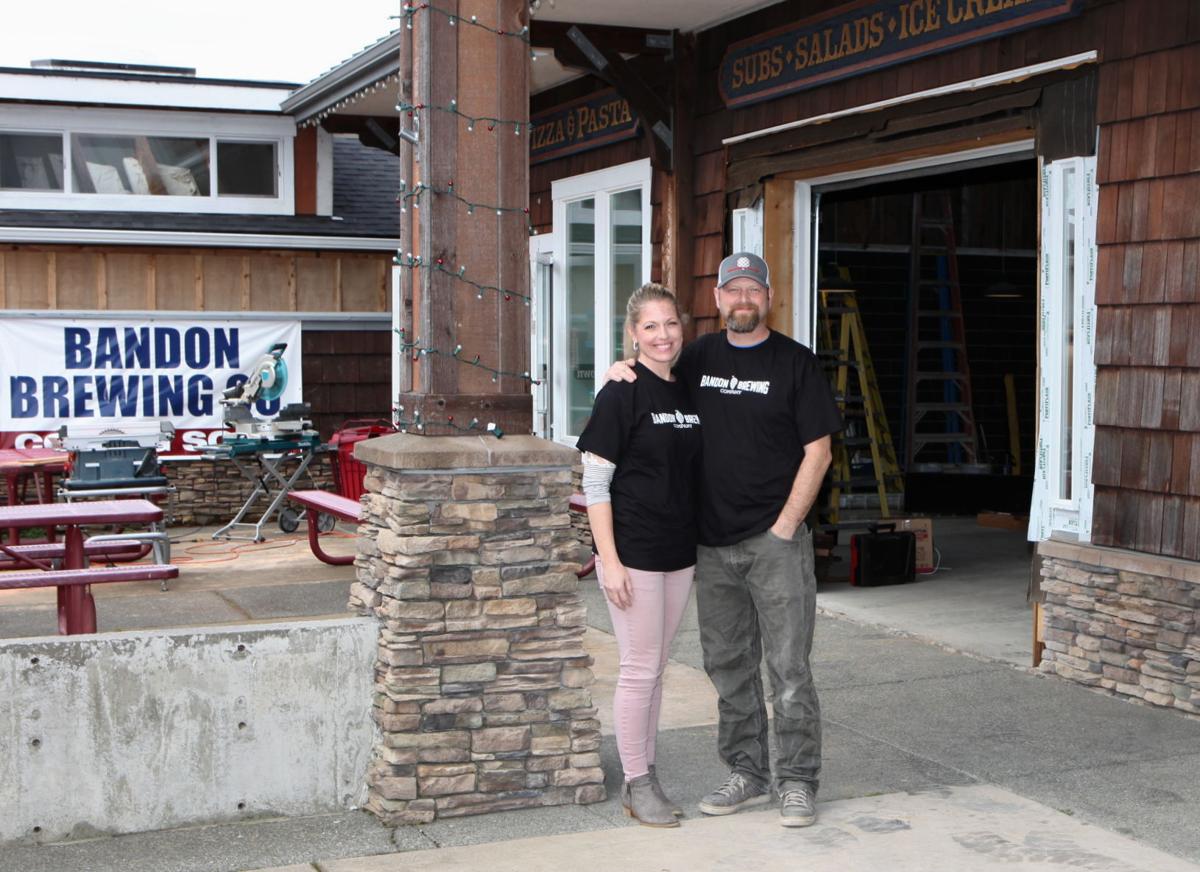 Nicole Rush and Jonathan Hawkins pose in front of the historic McNair Building they own in Old Town. Bandon Brewing Co. and pizzeria is open for business, with Bandon Vision Center moving in soon. 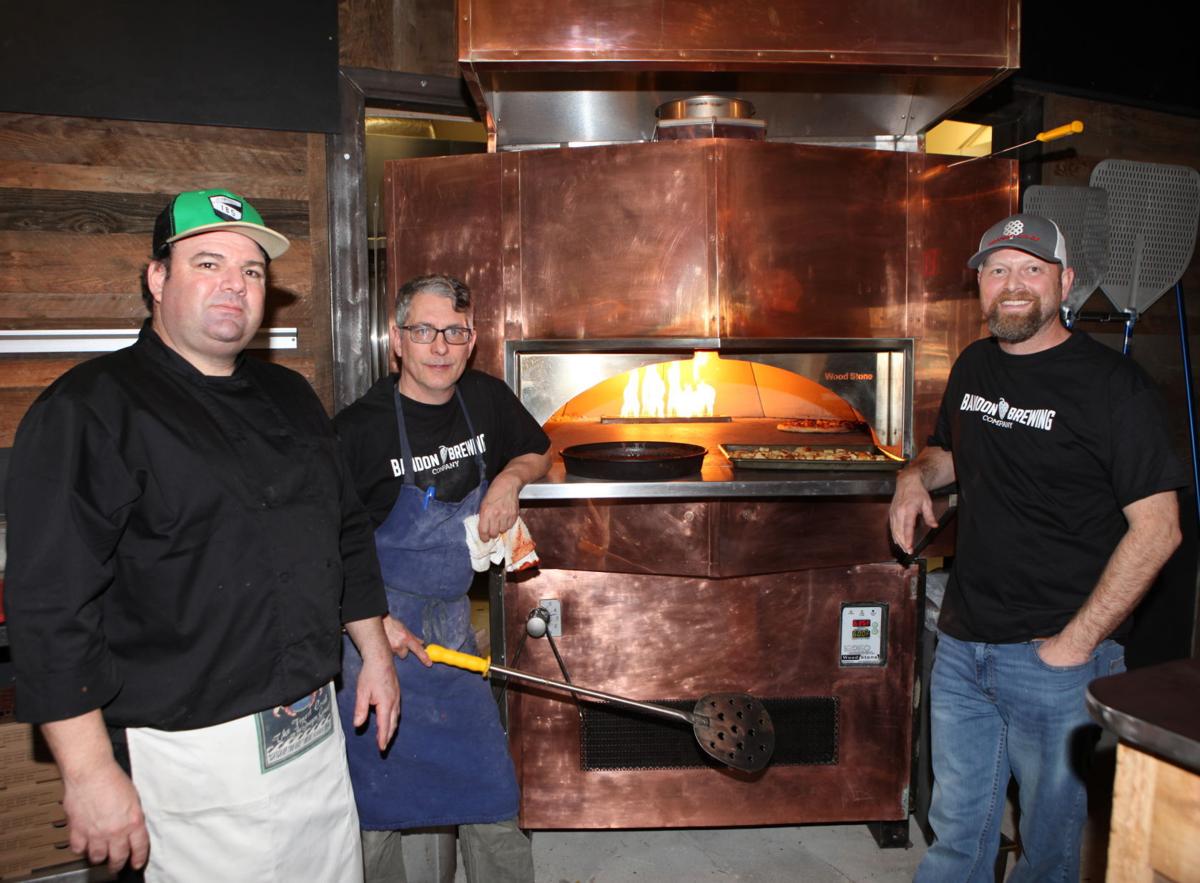 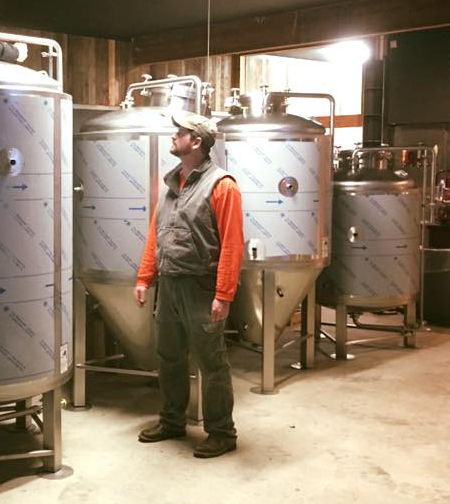 Jonathan Hawkins oversees the installation of the brewing tanks at Bandon Brewing Co. 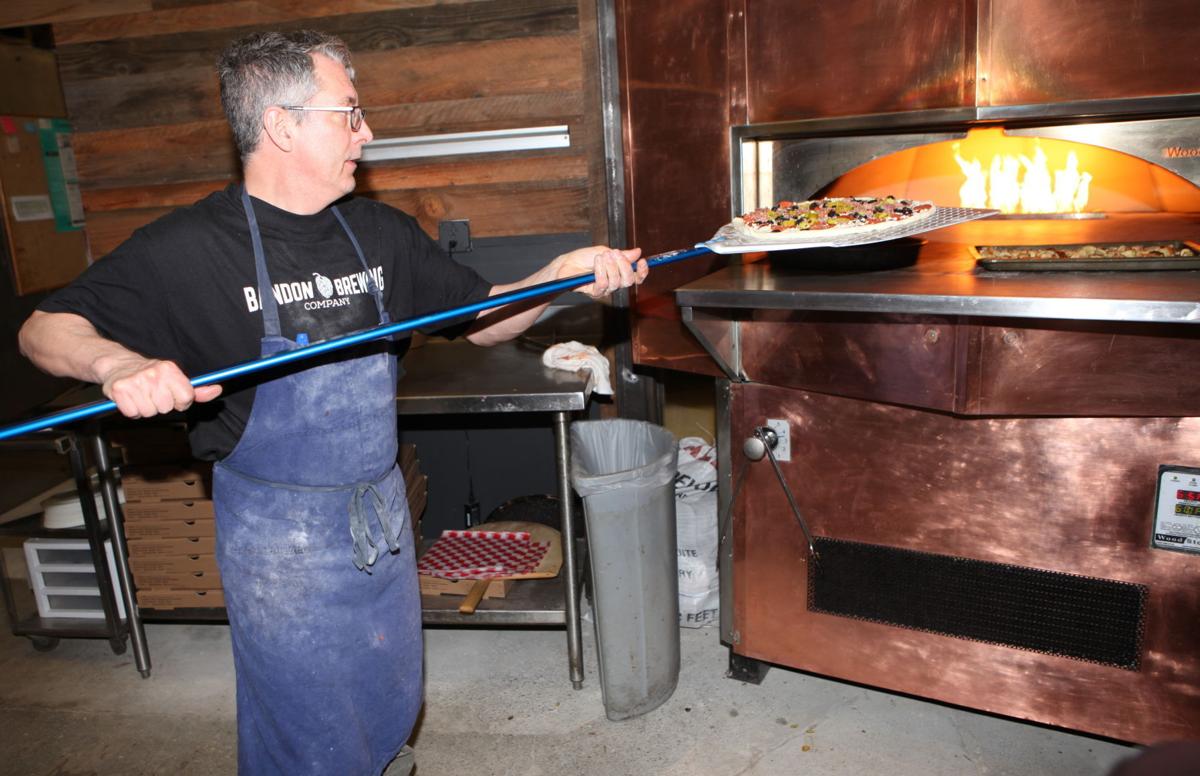 Tim Green, a consultant from Bellingham Wash., demonstrates how to bake a pizza in a Wood Stone oven at Bandon Brewing Co. 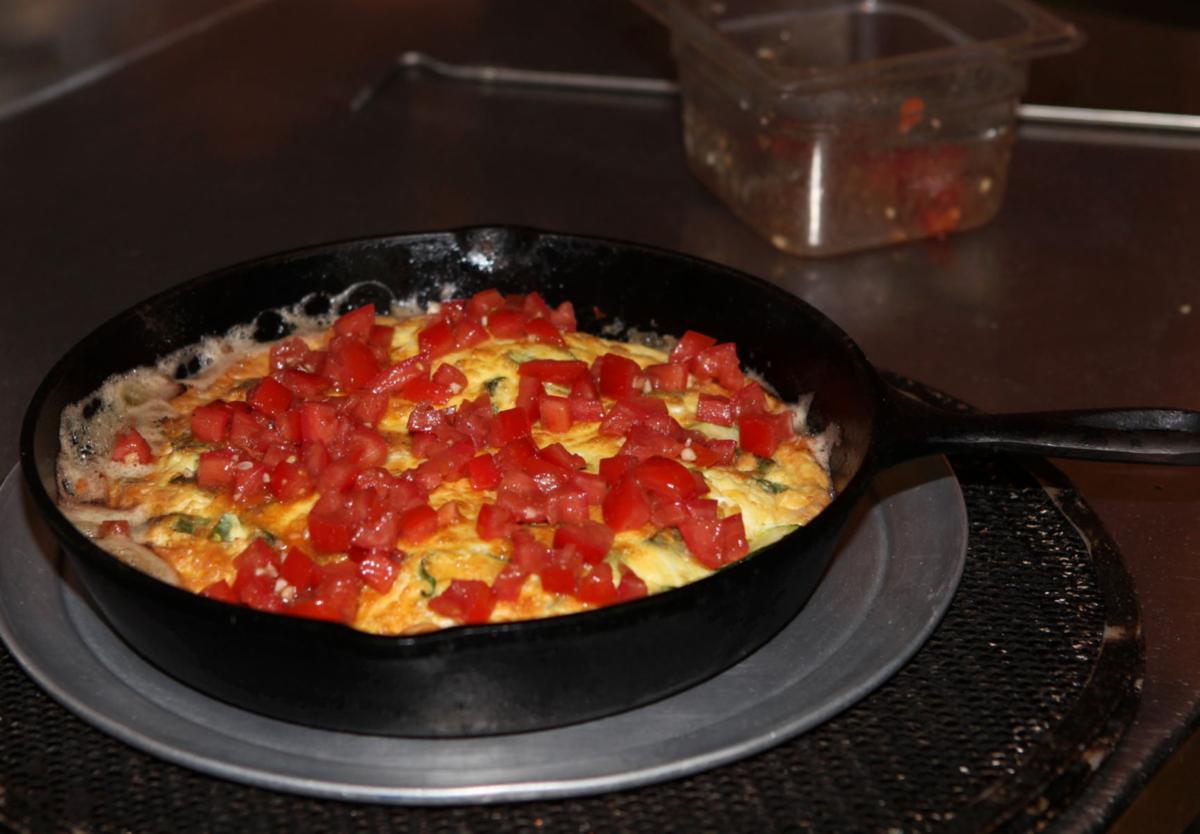 A Wood Stone oven-fired frittata is a menu item that will be offered for breakfast at the Bandon Brewing Co. 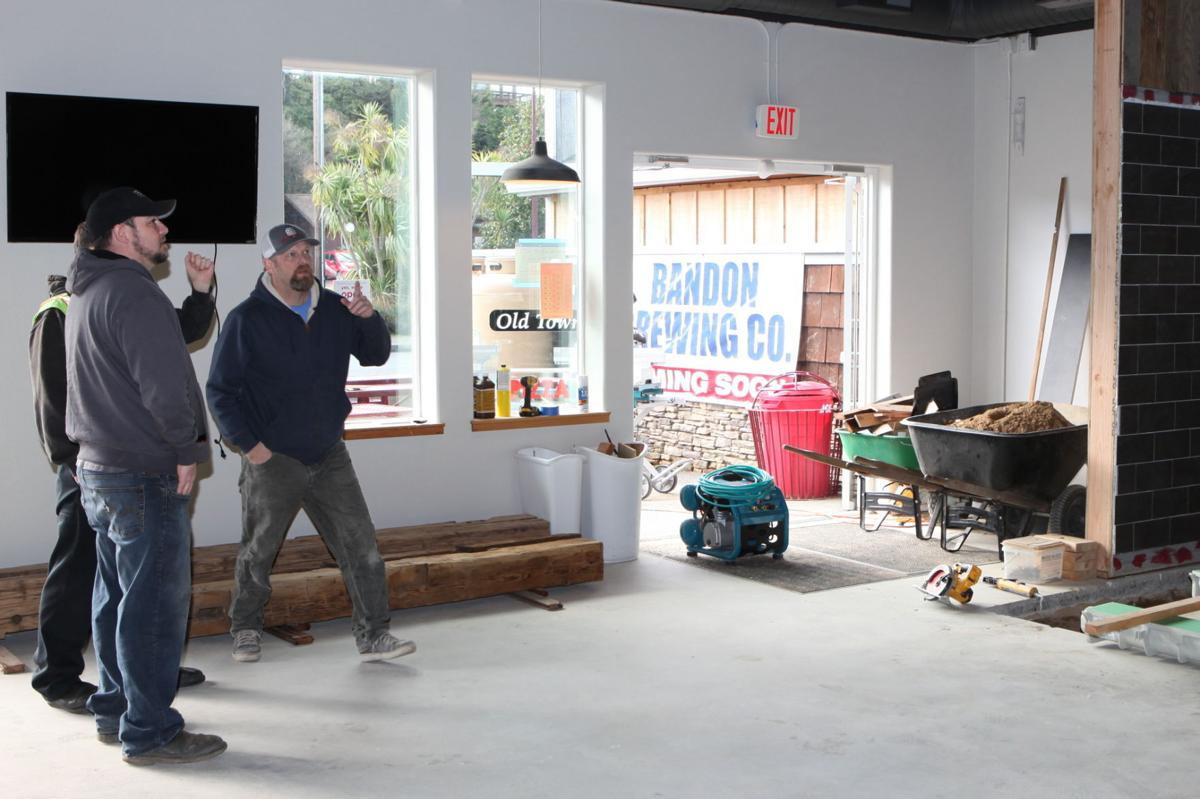 Construction is moving along at Bandon Brewing Co., and the brewery/restaurant is already open for business. 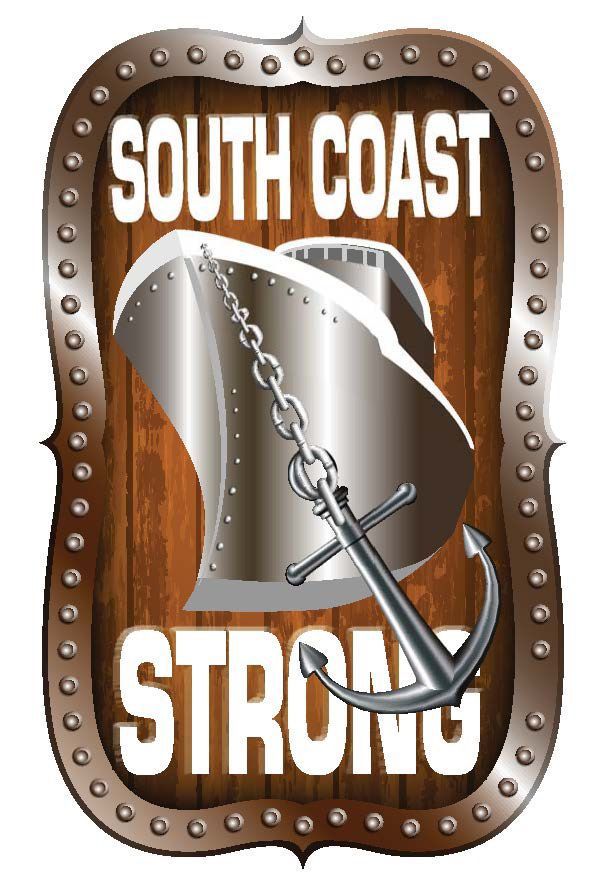 Nicole Rush and Jonathan Hawkins pose in front of the historic McNair Building they own in Old Town. Bandon Brewing Co. and pizzeria is open for business, with Bandon Vision Center moving in soon.

Jonathan Hawkins oversees the installation of the brewing tanks at Bandon Brewing Co.

Tim Green, a consultant from Bellingham Wash., demonstrates how to bake a pizza in a Wood Stone oven at Bandon Brewing Co.

A Wood Stone oven-fired frittata is a menu item that will be offered for breakfast at the Bandon Brewing Co.

Construction is moving along at Bandon Brewing Co., and the brewery/restaurant is already open for business.

BANDON – When Jonathan Hawkins and Nicole Rush purchased the McNair Building in 2015 they had big plans for the historic structure located at the entrance to Old Town.  Those dreams are soon coming to fruition with the opening of Bandon Brewing Co. and a new, expanded location for Bandon Vision Center.

R3 Construction, a company owned by Hawkins, broke ground on the project at the end of September and Bandon Brewing Co. is already serving up pizzas and other delectable dishes from the massive copper covered Wood Stone oven. Some of the steel tanks where Hawkins will brew his beer were installed late last week. Over the last few months, Hawkins has been able to get a jump-start on his beer production by making weekly trips to The Labrewatory, a brewery owned by Portland Kettle Works, located in Portland. It is there that he has been able to work with Master Brewery Charlie Johnson to hone and develop his recipes on a carbon copy of the equipment that will be installed at Bandon Brewing Co.

“With the support and encouragement and the manufacturing of PKW and The Labrewatory, and the mentorship of Charlie, this has truly been one of the great experiences of my life,” Hawkins said.

Hawkins, who is also a real estate agent with Century 21, has been busy daily, helping with each piece of the project.

A couple weeks ago, Tim Green, former executive chef, now a private consultant who owns Synergy Restaurant Consulting of Bellingham, Wash., and a Wood Stone oven expert, was training staff on how to cook using the special oven.

“It was truly an honor to have Tim here,” Hawkins said.

This weekend, Bandon Brewing Co. will offer its beer at the Gorse Blossom Festival and is hosting a Brew Makers Dinner on Saturday night. They will have Pacific Puffin Porter, 1-Eyed Jack IPA and an Amber Ale and a Hefeweizen on tap, all brewed in collaboration with Charlie Johnson at the Labrewatory.

The excitement is growing surrounding the brewery, which will be the only public brewery located in Bandon, but the plans for relocating Bandon Vision Center are just as exciting to Hawkins and Rush.

The couple is investing more than $1.5 million into the remodel for Bandon Vision and the establishment of the brewery and pizzeria/restaurant. The investment has created or will create work for contractors such as the Berry Brothers, sub-contractors, designers such as Jennifer Sirchuk of JS Designs in Brookings, architects, chefs, servers, brewers, managers, optometrists, vision specialists, office assistants and others.

Bandon Brewing Co. head chef Stan Hainsworth, former co-owner of Stan's Place in Bandon, who has been working in Hawaii for several years, will offer breakfast, lunch and dinner featuring artisan-style foods, such as frittatas, lamb sliders and Face Rock Creamery macaroni and cheese and pizza. Natalie Manning will work as beverage manager and Nic Vicino is acting general manager.

For now, Bandon Brewing Co. will sell beer at the brewery, including a growler filling station, but will likely expand that to distributing in the future. The brewery will offer 4-5 core beers, many one-off batches, and at least one featured special, including a cranberry saison as a tribute to the Cranberry Festival in the fall. The menu will be structured to offer discounts for locals.

“We are trying to support as many local businesses as possible,” Hawkins said.

Dr. Nicole Rush was born and raised in Gold Beach. She attended the University of Oregon, where she received her Bachelor's Degree in 1996, then Pacific University College of Optometry for her Doctorate in 2001.

In 2001, she moved to Bandon to work with Dr. John Reslock at Bandon Vision Center, located on Alabama and 11th Street Southeast, as well as Coquille Vision Center. At that time, the Bandon location was more of a satellite practice, but had never been established as a full time optometry clinic. Rush worked with Dr. Reslock for a couple of years at both offices before buying in as 50/50 partners.

Over the next 12 years, Rush focused on building up the Bandon practice to become a full-time clinic. Bandon Vision went from one part-time doctor and two staff members to two busy doctors with six staff members.

“As you can imagine, we have outgrown that location, as it is quite a small building,” Rush said.

At the end of 2015, Rush purchased the remaining 50 percent of the two practices from Dr. Reslock and became the sole owner.

“That led Jon and I into a search for a new, larger location,” Rush said. “The McNair Building was perfect. We would put my practice in the back section and eventually grow into the street-front location, where the Black Horse was located at that time.”

Once construction began, Hawkins decided he would like to purchase the Old Town Pizza business and upgrade it to a brewery and wood-fired pizza business. Eventually, Virginia Weaver, owner of the Black Horse Boutique, a clothing store in Bandon for more than 40 years, was ready to retire and the couple had the opportunity to upgrade the entire building for dual usage.

Unfortunately, within months of taking all of this over, a fire destroyed all of the equipment inside Rush's Coquille Vision office. The Bandon project had to be put on hold so they could focus on getting Coquille Vision Center up and running again. Now that project is about 80 percent complete, so the new Bandon location can be put back on track.

Rush has hired a new optometrist, Dr Morgan Grove, who originally grew up in Myrtle Point. She joined Rush's practice in June of 2016 and will be working in the Bandon office 2-3 days per week, in addition to the days that Rush is there.

Bandon Vision will also be open on Saturdays at the new location in Old Town. The extra space will also allow for more vision-related retail products.

“We hope to make it easier for those working folks to come have their eye examinations without having to take time off work,” Rush said.

“I have always known it was a crucial part to helping people have their best vision possible, we just haven’t had the room for it, and unfortunately, up until now, there has been no vision therapy clinic closer to us than Eugene,” Rush said.

“Our brains have to know how to process the things that we see and then know what to do with that information,” Rush said. “Vision is how we know what is around us, how far to reach out to pick something up, how to move our eyes across a page to read, how to process that information quickly, how to visualize things we can’t see, how to finish the image we can only see part of, or how to swing a bat to hit a ball.”

“Think of it as physical therapy for your eyes,” Rush said. “We will be helping patients from Brookings to Reedsport and out to Myrtle Point. We already have spoken to numerous optometrists, therapists and educators along the coast and have a referral list already started. Vision Therapy will help bring many of our children out of special education classes. It is truly an amazing program we will be able to offer and I am so excited to finally make it a reality.”

Long term, Dr. Grove and Rush will continue to serve the Bandon and Coquille areas. Dr. Reslock still works part time in the Coquille office, and they are looking to expand to Gold Beach and take over the optometry practice of Dr. John Rush, Nicole's father, in the future.

Hawkins and Rush attended high school together in Gold Beach and started dating a few years ago after meeting again at a mutual friend's get-together in Portland. Hawkins, who at that time was living in Washington working in the hotel business, had purchased Lake Quinault Resort from Ed and Peggy Backholm, who had moved back to Peggy's hometown of Bandon and opened Bandon Inn, now owned solely by Peggy. Hawkins' family had been in the cranberry business for 17 years in Washington, so with that background, the resort in Washington was sold, and he then purchased a cranberry farm in Bandon, formerly owned by Joe and Sally Moya, and moved back to the area to be near Nicole and her two daughters, Lyvia and Bella. The couple married two years ago.

The whole family has been involved in the new venture. Bella, an eighth-grader, hopes to have a small surf shop in the front of the building that sells paddle boards. Both girls are raising cows, pigs and chickens on the former cranberry farm, and are active sellers at 4-H auctions. They intend to use some of the beef, pork and chicken they raise to serve at the restaurant, so the whole farm-to-table concept will come full circle.

Hawkins and Rush are also busy volunteering in the community. Rush coaches volleyball and Hawkins is a member of the Bandon School Board.

“We're trying to create a space for people to get together and share ideas and enjoy conversation,” Hawkins said of the brewery. “I firmly believe that we all spend too much time with games and texting and on Facebook and should talk face to face more often.”

“This has been a big project,” he added. “Bandon is a fun place to be, and it's a supportive community. I think it would be great if Bandon becomes known as the friendliest community in Oregon. I think we're close.”